Revisit The Crazy Age of 100cc Karting of the 90's

FIA have dusted off some archives and published high quality video from the FA and FSA championships. 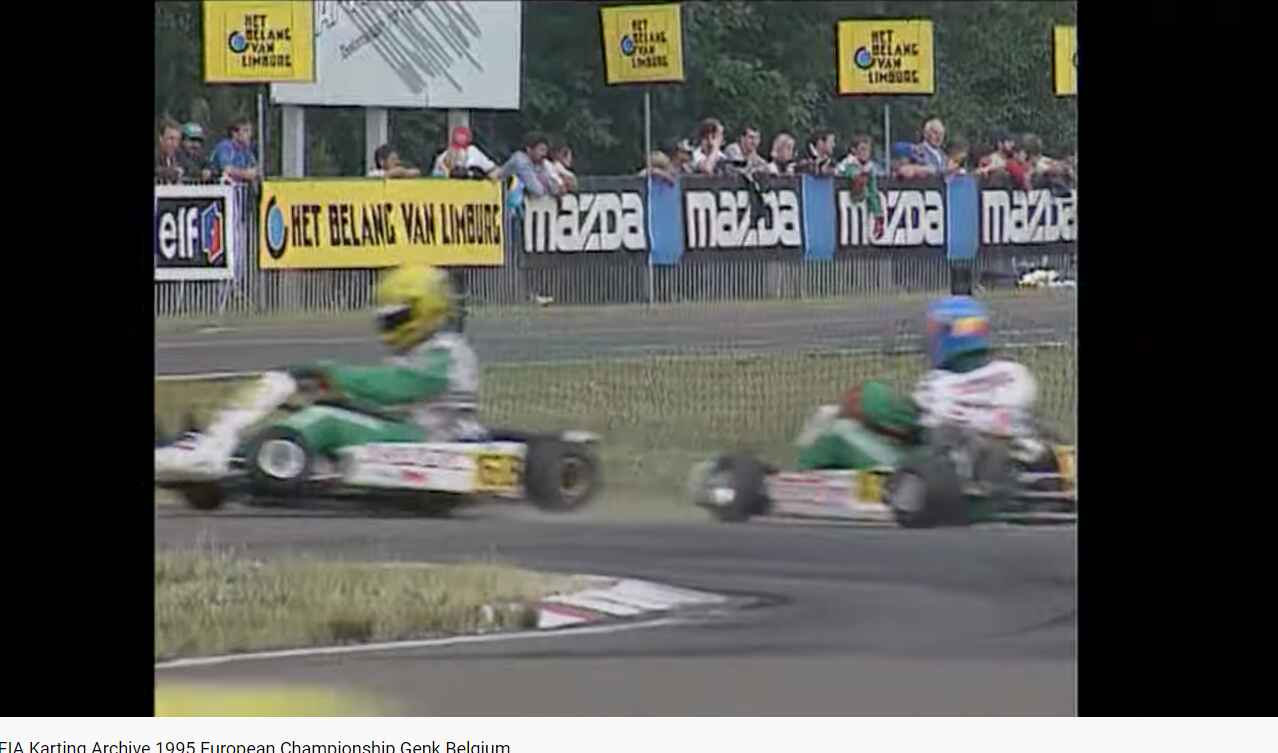 Also, did you know… mean piston speeds in these 100cc engines actually exceeded F1 levels in these days…

The Ferrari V12 went a lot further between rebuilds though

Thanks to @Alan_Dove for the heads-up on the archive.

I’ll give it a full view later today. With hearing the names already mention in only the first 5 minutes of watching it, this should be pretty pretty cool.
I still have my PCR Eagle chassis from 95’

55:46 is one of the coolest pieces of driving I’ve ever seen. Two wheels it then lands it into a slide under braking. just p p p p peerfect!

also, imagine if we had Helberg and Kumpen battling for a podium today, they’d be front page news in the Guardian.

The karts, the way they moved back then… whatever was right was right.

also eurosport knew how to film karts. A lot web broadcasters could learn a lot from watch these old videos.

I won’t say I’m a video guy, but I do try to capture karts from low down whenever I can. Either getting on the ground or finding spots on the track that are raised above the area I’m standing on. 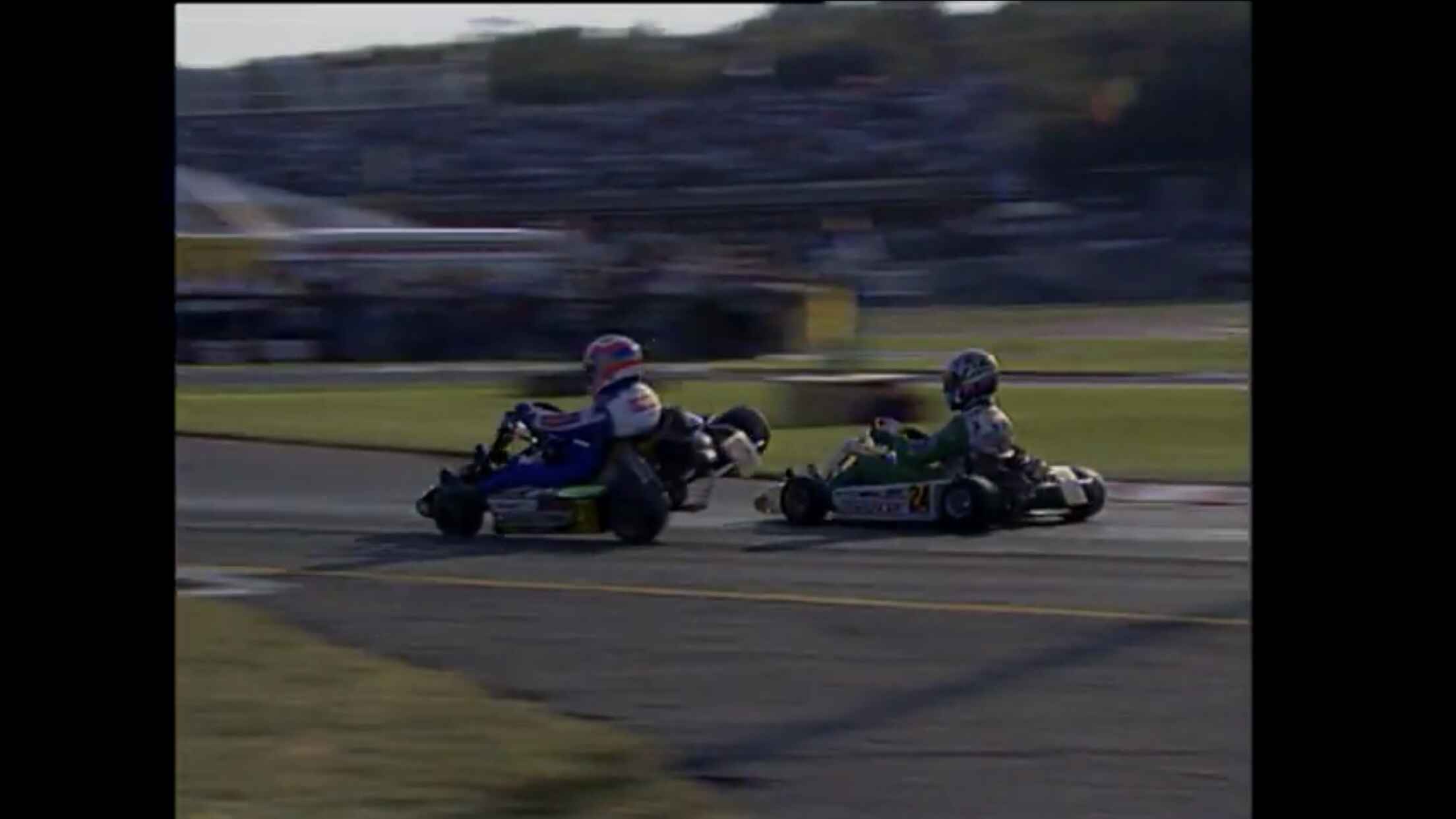 We run a vintage demonstration class (no racing just for fun) in NZ anything pre 95 and are meant to run SL/option tyres. I was told at a recent meeting that the 95 Swiss hutless maximo I was running wasn’t designed for soft tyres

I’m sure the mg yellows I put on had a lot less grip than these tyres.

I can’t speak to the Maximo specifically, but what most of the world considers “soft” is really medium. It’s rare for soft compounds to be run these days. In fact, the only place I’ve seen them run is autocross.

I am sure there were some additives to the tyre compounds back then that are banned now. Good to see drivers look as if they’re struggling to hold on.

A lot more grip by virtue of the tires M, how they rubbered up the track and weight of the class. Formula A weighed 308lbs.

Trying to find the video from the screenshot now.

That power at 308lbs probably necessitated the softer tires. I drove an OK once at roughly that weight on MG Yellows and it was trying to kill me any time it was on the pipe.

I am indeed struck by how grippy and nimble they seem. It looks like a hoot.

I come in at around 290lbs when I run my “vintage” karts so much fun to drive compared to my dd2.

At first glance, it looked like many of the drivers were tweaking the carb, but so often? I finally realized they were choking the air-box at the end of the straights. I imagine to cool the engine down for super lean settings. Don’t see that as much with Water-Cooled these days.

Did they have Dashes then to keep an eye on temps or was it just understood you needed to choke the air-box to cool things down?

Depending who you ask, choking was used for any\all of the following.

Cool the engine with a gulp of fuel.
Shut the engine down at high RPM on a lap where it’s not needed (ie conserve).
Add fuel to compensate for running lean on exit of tight turns.
Add fuel (oil) to the engine before closing the throttle at 19-20,000 RPM
Looking euro.

As to the efficacy of each, again that depends who you ask.

Basically they were capable of revving themselves to mechanical destruction if you let them. Peak performance also tended to coincide with running them right at the edge of mechanical destruction, especially with aircooled. If not that, then just plain locking the motor up from running to lean. Choking was a good way to conserve when you could. Running unleaded fuel didn’t help either.

When watercooled came in (I think '01? @NikG? ), reeds also were introduced to FA and FSA, reeds don’t take kindly heavy choking by comparison to the rotaries in the videos.

Nowadays we have engines that are mostly low(er) revving reeds with piston life in hours rather than minutes so you don’t see it as much.

Reeds became almost the only engine you could use in FA during 2002, if i remember correctly it was a slight modification in the rules that gave the Reed an edge because it was easier to drive with similar pace to the rotary. Don’t think it gained traction in FSA, partly because of the big slide carb and because FSA pretty much died around that time.