We are seeing new faces in KartKraft with the updates. As a consequence, lots of new players with new questions.

One thing that I have noticed this time around is folks thinking that we are “drifting” or “sliding” around the turns.

KuiLen asks: “So i just used the ka100 for some practice but the gliding that people do in hotlaps is that realistic? Never saw it at my local rental kart track

AaronF asks: “So I just drift around corners?”

So, we have a disconnect. The idea of rotation and slip angle is utterly fundamental to going fast in a kart. It’s not visually obvious what is going on. To the new guys, it looks like we are sliding.

I can say, that’s not a slide, we are interlocked with the rubber laid down on track, it’s called slip angle. But saying a thing doesn’t explain it.

I’m not here to formulate a way to communicate what slip is, more to point out a disconnect in how folks perceive karting at speed. I don’t think I ever knew about it until I started doing it (rotating and using slip). I became aware by doing. No one ever told me about it (until later).

In case you are new and wondering wtf we are going on about:

This piece by Warren goes into this idea in greater depth.

But are you? Seriously tho, your footage at Geel looked correct. Nothing slidey there.

That’s because you’re seeing my one good lap and not the 100 other ones where the kart felt like it randomly over-rotated in turn 4. Turn 4 at Geel is insanely difficult to get through without the rear swinging around on my at exit. I’m constantly trying to unwind the wheel, attempting to catch the over-rotation before it can happen.

It seems the only way to be fast is to chirp the brakes and get the rear out on entry and ride that through the corner. You don’t turn the kart with the steering wheel, it’s all on the brakes. That whole turn 4 is just a 4-wheel slide through there. Smoothness is not as important as dialing in your brake pressure to get the right amount of locking. Doesn’t feel natural to me.

Some of this “doesn’t feel right” is due to not receiving other feedback, such as g forces, your body feels while driving a real kart or vehicle, especially those one is familiar with. I drove a braking simulator that had some longitudinal motion but no pitch motion capability. Initially, when the brake was applied it felt realistic but when the motion ran out of travel, it felt like I had hit a patch of ice and I was skidding.

To further explain the need for pitch motion for braking. The pitch position/angle is used to simulate the steady state portion of the longitudinal g forces. This can only be done on a enclosed simulator, where the driver cannot see the room and the simulator cab is rotated pitch down to simulate steady state braking. There is a synchronization of surge and pitch motion that creates the illusion of braking.

In one of my other lives I was motion simulation “expert”.

This jibes a bit with me in that I simulate using shakers (as opposed to motion system). The shakers provide feedback about things like lock and slip. But, it’s also a sort of motion system in that it tricks your mind, frequently. Although the rig does not move, the rear end often shifts on me. I can feel it.

@speedcraft since you have a dof3 system, does Larry thotts jibe with your experience?

What @OldFartKarter’s said sounds right to me. What he and I experience in sim might be slightly different (I don’t really get the ‘ice’ feeling when the pitch hits it’s limit), but for sure the lack of ‘real’ vestibular feedback does impact my ability to interpret what’s happening at the contact patches.

The dof3 system is fun, and is way more immersive than a static rig, but it made no real improvement to lap times (I’m still consistently 0.2-0.5 off the fastest guys).

To me, driving is basically two tasks:

Because my driving is based so much on energy management (as the first step that influences the energy cycle of cornering), I feel like the mental model I’m driving to has an expected profile of forces. However, in sim, there are no ‘forces’ (or with the dof3 there are only rudimentary simulations of forces), so I feel like I’m driving with one sense tied behind my back.

The funny thing is that I have been able to adapt to the lack of real forces in all areas of sim driving other than extremely hard braking zones, and/or the transition from hard braking into properly loading the front tire to get the car the rotate the way I want. Perhaps it has to do with the rate of change in speed/force (i.e. my ‘force emulator’ can’t keep up), or maybe I’m just an old fart.

My real hang-up is that I don’t experience these issues in other sims. iRacing, AC, and basically every other sim I’ve driven, I’m able to predict how the vehicle is loading up and I can get to a feeling of full control and a natural driving rhythm. KK is the only one I can’t seem to nail down. And I don’t know if that’s because I have an expectation and mental memory of what I need from the kart in terms of feeling and forces and I can’t break that habit, or if something else isn’t quite right with how the sim is providing feedback to me.

I like this guy on YouTube. Does a good job of explaining complicated concepts. He’s car focused, but applies in karting as well. He says ideal in a car is 10 degrees of slip. I would imagine it is less in a Kart? Also, based on what he’s saying, it would change based on tire compounds… maybe… not sure. 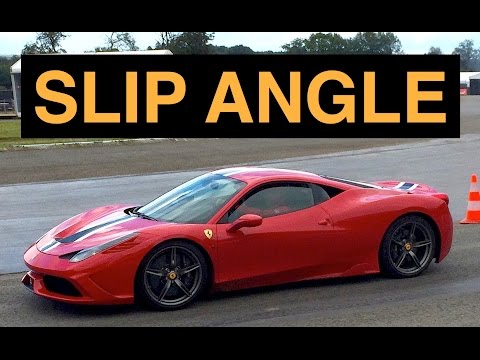 TJ, it is your experience in kart racing that makes the the kart simulation unrealistic and could be a handicap on simulators because you partially rely motion feedback to make your steering and pedals input. But, It can all be re-learned by practicing on the sim. The other car sims you don’t have refined real world experience so there isn’t an expectation of motion.

I’m curious as to how lap times compare between the sim and reality.

Lap time should get better with good motion. Game sim motion bases have very little travel, so they can only provide vibratory cues. It’s akin to very low frequency sound.

I think some of the more sophisticated motion bases have +,- 10 ft or more travel.

Lap time should get better with good motion

Funny you should type this. I was in a conversation on discord with a young man who is ostensibly some sort of alien. He had pinged me for a setup in KK and we got to chatting.

He claims that he doesn’t use motion or shakers because:

“No don’t use shakers or motion because I race competitively and they are a disadvantage”.

“The input delay and how quick the motion is too slow which is why no top racers run them in rfactor, iRacing ect”.

I tend to disagree. My experience has been that the ffb info is definitely helping understand what’s happening underfoot. I can drive equally well without my shakers but I miss the detail,

Any thoughts on wether this fella is correct? Also, @tankyx whats your opinion since I know you are actually an alien as opposed to some guy on the net.

TJ, it is your experience in kart racing that makes the the kart simulation unrealistic and could be a handicap on simulators because you partially rely motion feedback to make your steering and pedals input. But, It can all be re-learned by practicing on the sim. The other car sims you don’t have refined real world experience so there isn’t an expectation of motion.

I suspect you might be right. I can’t square with TJs take on this. It does seem to be borne of expectations beaten into him from years of hoofing real rubber.

Also, @tankyx whats your opinion since I know you are actually an alien as opposed to some guy on the net.

I tend to agree with that. I know that I am the only one to enjoy motion in my group of sim friends. The issue is that it takes a lot of fine tuning to have a natural feel that wouldn’t impact negatively your performances. And even with that, you must expect a ~35ms delay. It is not much, but enough to be bothering you at high level (same with irFFB, and that’s why I don’t recommend using it)

Thanks! I wonder if that’s really noticeable (delay). What is the 35ms delay you refer to? Time for the signal from ffb to be expressed?

The time to get the signal from the telemetry, make all the calculation and getting the output signal for the actuators. And it is not consciously noticeable, but you will feel that something might be slightly off

I don’t feel delay with shakers but I have not tried motion. Thanks.