Needs some help and advice on gearing, i guess, on a Rotax Junior. looking at the manual peak engine performance is met between 8500 - 11500 RPM. at the end of the straight we are hitting 13000 RPM, coming out of the previous corner we are at about 5800 RPM. The question i have is are we unnecessarily going beyond 11500 RPM as the engine performance drops. Should we be gearing for a maximum of 11500 at the end of the straight?

Fairly new to karting so the question may be on the basic side however any advice would be appreciated.

Short answer is no because you’ll have very limited power coming out of the turns.

Generally you’ll find that you’ll be sitting on the limiter/max revs on the longest straight for some time. Essentially you’re trading top speed for “punch” out of the turns.

For the most part, the stopwatch tells the story

I would think about the gearing in the other way. If the peak performance is between 8,500-11,500 RPM, I would gear the kart so that when he exits the corner it is at 8,500 RPM at the minimum. The engine will still accelerate after 11,500 RPM, but it’ll struggle more exiting a corner outside the powerband versus accelerating out of it down a straight.

You’re are asking more from the motor than it can produce. Consider what it would take to increase the RPM coming out of the last turner from 5800 to 8600. That’s a whole bunch of teeth.
Maybe add a couple of teeth. Then concentrate on driving the kart better through the last turn and having a better exit speed. That’s going to help all the way down the straight. As the driver gets more proficient, you will be loosing teeth off the rear gear and the lap times will be coming down.

All good advice. I will try a couple of different sprockets this weekend and asses the data after. Like.you said it’s the clock that counts…the competition (sound like)they have higher revs out of the corner so we will work on that this weekend. Everything is stock on the kart at the moment including the jet and needle settings so lots of learning needed…

@MoodyM one number to consider is your overall average RPM on the whole lap. When you’re trying to determine gearing with the Rotax, that is often the first number tuners look at. I don’t recall the value for the JR. Rotax off the top of my head, I want to say it is about 10,800 the Rotax reps In Europe wanted to look for when they were gracious enough to come to regional races to help racers a year or so ago.

We actually jumped from a 128 to a 125 jet today and it practically knocked 1 second of our lap times which was a huge improvement. i remained on the same 80 sprocket and what i noticed as a slightly lower RPM on the end of the straight however we gained an extra 1mph. out of the corner we were slightly higher on the rpm as well… so good progress…

I feel the next step is to master the tyres… this seems to be a mystical art. all of our best lap times seem to come at the end of a ~12 lap session (30s lap) by time we find the grip the pack has gained so much ground. getting those tyres in the zone seems to be an issue. we start on 14psi (cold) and they gain 1 or 2 psi at the end of the session. if i add 1 or 2 psi cold, we seem to overheat the tyres… rear grip seems to be failing us.

I don’t know how important jetting is on the Rotaxes, but I’ve heard it is super important to have a fast engine.

I will say that 2 PSI seems like a big jump in pressures, we usually go in .5 PSI increments. I’m assuming your driver is pretty new, so he may be burning up his tires quickly. I would work with him on smoothness on the wheel, and not overloading the tires too much.

I’m surprised you gained MPH but not RPM down the straight without changing gearing. That doesn’t seem to make sense to be but someone more experienced would need to chime in about that.

@Aaron_Hachmeister_13 could be an improvement on bottom end and mid range. If the engine is pulling better there the mph will gain but peak rpm could stay the same.

After talking to my son he is saying its made a big difference changing from the stock 130 jet to a 125. it was a big jump but seems to have made a good difference in performance. he is still saying he is bogging out of the hairpin which i believe the needle position will help with, currently default position 3. we decided to make one change at a time to see the difference so next weekend i will try position 4 to see if we are better out of the corners. He has done a lot of karting, years in fact, we we recently started Rotax Juniors so its a big learning curve…

The tyres again i find a struggle to read. we got good times from the wets below, we went out on 14PSI, this is what my tyre gauge was telling me but i am suspicious of its accuracy. Could anyone tell me if these tyres look like they have overheated? 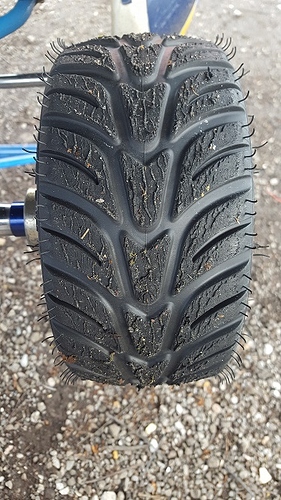 Are you guys practicing in the rain, or are you putting treaded tires on in the dry weather???

Last weekend it was a damp / greasy track. All was on wets for the first part… to much pressure would you say?

Yes. If it’s only damp/greasy I would be doing 8, 10 PSI at most. I know some drivers have done as low as 6 before and been very good with a track that was basically dry but already called a rain race.

The wear looks fine for wets. We only run low pressures if the track is legitimately drying out and will be dry for the end. Then the goal is to save the tire and not overheat it.