Hi! I recently bought a Rotax Max and according to the previous owner it was time for a rebuild. The hours since last rebuild is unknown…
What do you think, do the piston need to be replaced or does it have some hours left? I’ll only be using it for fun, no competition.

But in general piston terms…that looks close to brand new to me. The coating on the side skirts is still verymuch intact and there are no signs of blowby past the ring. For the latter you would see carbon buildup below the ring and there’s essentially none.

I’d send it based on those pics. How does the crown (top) look?

Thanks for the answer!

I was thinking the piston may be too small, because the only wear is at the top of the exhaust side and the bottom of the intake side?

Here is another picture of the piston without flash for reference. 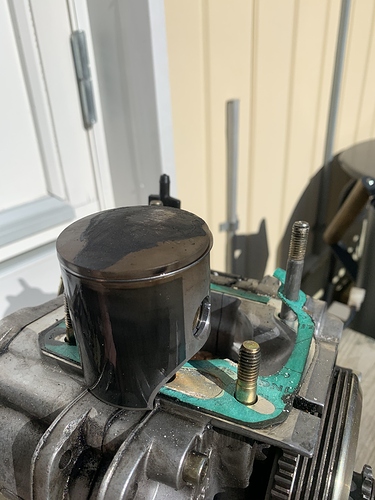 The last documented rebuild was in 2007 so I will at least replace the seals and gaskets.

Was the engine confirmed by you to be running and performing on track prior ? If so then that’d disqualify your theory on the piston being too small…then the compression would be so low it may not even have started much less run strong on track.

Yes it was, thats true! I measured cylinder and piston today, and everything was within the tolerances. I’ll just put it together an give it some more hours. Thanks guys!

By the way, since you’re just using the engine for fun and you seem to be mechanically inclined enough to take the cylinder off, then I’d recommend using a castor based oil for maximum longevity. There’s nothing that provides the lubrication that a castor based oil gives. The down side is that it does not burn very clean, so carbon will accumulate on the piston crown with time. No problem for you though, just pull the cylinder and clean that off every so often and you’re good to go!

Maxima 927 is a very good option for you. Also consider running a little more oil than 50:1 rotax recommends…that can help prolong engine life a bit too.

I’m a big proponent of castor based oil, but having run it in Max at the beginning, I don’t think it’s worth it to be honest. Really it’s lubricity advantages don’t come into play until the cylinder wall is getting super hot.

Just run the synthetic. It’s shown to be adequate in racing conditions in Rotax and you have one less variable to worry about by using it.