Since we are all bored. I thought I would share my last stupid karting mistake, which took 2 hours figure out. Thank god, it was just practice. Been racing karts for over 20 years, so you’d think I’d know it all.

The brakes would severely drag after a several laps on the track. I would bleed the rear calipers and/or the master cylinder and push back the pucks and all was fine, until I ran a few laps and the brakes would start to drag again. This went on for several sessions when I observed the brake pedal travel was almost non-existent each time, hmmm. At that time I put the problem on a bad master cylinder and was ready pack it up and go home but it just didn’t smell right. In 20 years of racing I’ve never had a master cylinder nor brake caliper fail. So I took one final attempt to troubleshoot the problem and looked elsewhere for the problem and discovered that the jam nut on the brake pedal rest stop bolt was loose and the stop bolt would vibrate out (get longer) and start to apply more brake. 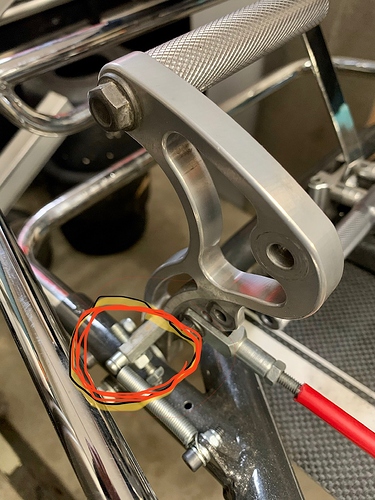 Was leading the final at USPKS South Bend in X30 Pro in 2014 and pulling away when the chain fell off because someone (my dad) forgot to tighten the carrier when we changed gears.

I accidentally flooded the engine on the warmup lap of the pre final by pressing the gas to hard out of a very low RPM turn. Did I mention it was my best qualifying bid the season?

Way back in maybe 2007 (I think?) I was racing HPV/KPV at a WKA Man Cup or MWSS event at my home track in Dousman, WI. Practice was going great the day before races, but I lost something like 7 tenths to a second overnight. Qualified around the back half of the midfield. Made up maybe a few places in the prefinal. The kart was handling fine, it just had nothing coming out of the corners or down the straight. Eventually we took everything to the tech area and starting pulling everything apart in a last ditch attempt to figure out what the problem was, and while doing that we discovered a rolled up rag between the exhaust header and the pipe flex. That’s when my dad remembered that he had stuck it in the header the night before while the exhaust was off (don’t remember why we took the exhaust off to begin with) just to keep anything from getting in the engine, and just forgot to take the rag out before putting the exhaust back on. I’m pretty sure I ended up setting fast time in the final, or at least came very close to it.

Ooof. Right in the feels.

I think I would never had figured that out. That must have been maddening.

Had to have a seat tab welded on engine side that broke and wanted to look over the whole frame for any signs of cracks or stress. I had spent several days putting back together making sure everything went together perfectly. I cleaned and lubricated all the bearings and steering joints. Set up the chassis based on some advise from our local guru to better suit my size. Nut and Bolted the entire kart. Everything looked great.

First race after and kart is running good. Still may need a few tweaks to the set up. Pre-Final had some improvements over last run. Made my adjustments for the final and my pace was improving.

Halfway through the final, I am coming off the last turn into the straight toward the line. I am on the gas, moving to the outside of the track. About a third of the way down, the kart starts drifting toward inside of track. I make a minor correction. No change. I make a bigger correction. No change. Steering feels dead, no resistance. I am looking around at my front hubs, the tie rods, the steering column. Everything looks good. I move the steering wheel again and notice it lifts upward on the shaft. WTF!!! Hard on the brakes and let the track shuffle me off into the grass. I get out and see that the bolt from the steering hub through the steering shaft is missing. Somehow I either forgot or lost the lock pin that secures the nut and bolt vibrated out.

I felt like such a fool. Had to do the walk of shame back to the pits to retrieve the kart stand and then again with the kart. (inner thoughts…“Loose Nut behind the Wheel…How Cliche’…Dumb Ass !”.) Had I crashed in bid for position or got tangled up in traffic I would not have minded so much. Only plus side was it cost about $2 to fix!!

Was running Yamaha Can, and in the pre-final was having a pretty good battle with Dismore Sr. and a couple others, running towards the front-ish. I noticed throughout the session that the steering felt REALLY strange, and at some points I was having a tough time controlling the kart when exiting corners. I was able to keep things together and run the remainder of the session, finishing right behind Dismore. We were bullshitting with one another while in the scales line, and I was talking through the issue I was experiencing, while at the same time trying to decipher in my head what the heck could cause the kart to behave SO strangely. Pushed through the scales and took the thing back to our pit, still confused.

First order of operations was to check the front end alignment, as well as all fasteners for tightness. At the time I was piloting a Margay kart, so our process to keep the steering straight was to clamp a vise grips to the steering column once the lasers were on the kart and all lined up. It was at the time that I went to put the vise grips on the column that I realized I had never taken the set off before running the pre-final…mystery solved haha

Reminds of the time when my buddy Jim couldn’t get their kart started but they just kept cranking on the starter. Suddenly, the motor starts accompanied with shredded blue confetti coming out of the exhaust can opening. Of course, Jim forgot to take out the shop paper towel in their header.

Way back in maybe 2007 (I think?) I was racing HPV/KPV at a WKA Man Cup or MWSS event at my home track in Dousman, WI.

Being “the dad”, I have many crimes against my name. Way more than I could list here. And there would be plenty more that I’ve probably forgotten. Hopefully my driver is working so much that he’ll miss the thread.

Was that this year at NTK during Winter 3?

I didn’t race long before I focused on my daughter’s racing, but there could be a few on both her side, and my side. One that I can think of from her side, she was still very new to karting and had only been on the track about a half dozen times or so. Well, coming into the pits once, she didn’t leave enough space to one of the cement pylons and hit it with her rear tire. She bent the axle pretty good and caused me to get a new axle for her.

My biggest is usually not tightening the chain enough and having it come off in the race. I’ve done that too many times, but it’s from not wanting to run the chain too tight. Now I have a chain guard on her kart and we shouldn’t drop that many more chains.

That would have been simultaneously hilarious and appalling. I assume you’d need to tear the engine down to get all the schmutz out. Does paper get sucked into cylinder?

First, was first kart, first day at the track way back in 1997. Yamaha pipe/clutch set-up. Bought a used starter from someone on the internet out of VA (VA is road race country – back then there were dual engine karts).

Put starter on the kart, hit the start button and it took the starter nut right off the engine. Unknowingly, I bought a left side engine starter – they spin counter clockwise. Lesson learned.

That would be it sir…

…and now there is someone on here that witnessed my shame…lol.

I had a similar situation happen. I noticed the guy I was tuning for that week had a loose steering wheel bolt while sitting waiting to go out for practice. Go grab tools and go to tighten it. As soon as I turned the bolt the nut fell on the ground with part of the bolt still in it. Definitely an “oh $#!+” moment. Now I always make sure the bolt goes from top to bottom so if the nut sheers off you still have the weight of the bolt holding it in so you have some steering left. And that nut/bolt gets replaced at least once a year regardless of how good it looks.

So you might not have forgotten to tighten it. It’s crazy to think how one little 6mm bolt is the only thing holding the hub on.

I saw you pull in and was wondering why you stopped on the inside of the straight. We were on the grid waiting to go out after you group.

24h race. I kept saying to my friend ‘do you need me to bring over some loctite?’ he kept saying no, he got some locking grease and it is fine. We lost 4 magnum clutches. After the race I looked at this loctite-alike. Copper locking grease. Rated up to 60°C. On a clutch. No wonder it all came apart (repeatedly).