I don’t care about the names, but I would like to know what the offenses were that a driver and team principal were banned for recently.

I looked but can’t see any recent headlines.

There was an on-track altercation between Driver A and Driver B. Driver A crowded Driver B to the grass coming to the line, and there was a wheel-hop, and both Drivers went off, with Driver B hitting the tire barrier pretty hard.

Driver A comes from a team that does extremely well, so many people think they are “cheating” or are “in the pockets of the series” or “get special treatment”, so there was some boiling over of emotions from some people in the paddock. Driver B’s team manager then came up to Driver A’s kart while it was on the stand walking back to the tent and grabbed the side pod and flipped the kart off the stand, upside down onto the ground.

Driver A was penalized for the on-track incident which seems to have been largely agreed by most (even the driver’s team) to be a poor, dumb move that was too aggressive.

Driver B’s team manager was suspended for his post-race actions of flipping the kart off the stand.

Driver A was escorted off the premisses as there was essentially a mob forming at the scale line. Keep in mind both drivers are minors.

There were also some legal threats made, violent threats made etc. by various people afterwards as well.

Here are the two statements made by SKUSA post-event:

Tuesday, 28 June 2022 08:38
Following the X30 Senior Final on Saturday June 11th, SKUSA wants to reassure our customers that the incidents that took place at the end of the race - on and off the track - are not acceptable nor will be tolerated at any SKUSA event. SuperKarts! USA is taking these situations tremendously serious.

SKUSA has taken preliminary actions on both incidents, resulting in a driver and a team principle being suspended from all SKUSA or SKUSA - sanctioned events until a full investigation is completed and our disciplinary committee comes to an agreement.

We want to assure our participants that safety is our top priority. These individuals are in violation of the SKUSA Rulebook:

Section 108 DISCIPLINARY ACTION; sub paragraph 108.2.3 DANGEROUS: Performing an act or omission that creates an obvious and serious risk to others- with deliberate disregard of the consequences.

We would like to reiterate that any time a participant is involved in breaching SKUSA’s rules of conduct, on or off the track, we will ensure that the proper actions are taken – sternly and swiftly.

Although the public may not see everything that we are doing to handle and prevent these types of incidents from occurring, we are working very hard to keep all of our drivers and; attendees safe and held accountable when participating in our series.

Monday, 20 June 2022 16:00
Starting immediately, the named organizations and their affiliated series will be working together to raise the level of professionalism in the sport of karting in the United States, both on the track and in the paddock.

We will be working together closely to develop a system which honors the disciplinary actions taken by one organization or series, across all named organizations and affiliated series. Our series will no longer be a place for bad behavior, to include, but not limited to both acts and threats of violence, by attendees and drivers alike. No competitor or attendee should have to worry about their physical safety at karting events in the United States and no longer will these bad actors be able to simply take that behavior to another series.

TJ summed it up really well, but I’d like to add and slightly derail the topic, a lot of people are claiming this was an intentional move by Driver A. I disagree with that sentiment.

Driver A did something that series have allowed to happen for a long time. He noticed that Driver B had a run and was going to beat him to the line, so Driver A edged towards the left side of the track, I’m guessing trying to intimidate Driver B into backing out or nudge him into the grass to make him lose speed. Driver B held his ground, which in my eyes he had every right to do, and they made wheel to wheel contact, sending Driver B into the wall. This was a poor judgement call by Driver A and a bad move, but not malicious or intentional as a lot of people are saying.

The series’ (plural) have allowed moves like that to be made for a long time now. Just off the top of my head, we’ve seen this happen, either exactly like what happened in Utah or a much more aggressive swerve towards another kart (Euroing), at Round 4 of the SKUSA Winter Series, Thursday practice at USPKS Orlando, ROK Cup Orlando in I believe one of the pre-finals, I’ve had the driver I’m working with this year have this happen to him at both USPKS Orlando and USPKS GoPro, and last year one of our teammates was sidelined because this happened to her and she got a concussion from the resulting incident at USPKS Road America last year.

Until there is a significant penalty (10/15/20 second penalty or more) for dangerous/erratic movement down a straightaway, the series are allowing this to happen until there is a crash. It’s all seen as fine, then we see an incident like Utah. Everyone goes nuts for a couple weeks, then we go back to normal like nothing happened.

Another problem, not to diminish what Driver A did or what happened to Driver B, was the setup of Utah Motorsports Campus. The barrier that Driver B made contact with was a guardrail with tires in front of it. That is incredibly dangerous and I’m actually surprised that issue hasn’t been covered before. Utah isn’t the only track with that setup, GoPro’s front straight and Road America’s front straight are the same, as well as a lot of tracks in the UK from what I’ve seen. We’ve witnessed crashes where drivers go into tire barriers and get flung from karts so many times, and nobody ever stops to think “wow, these tire barriers are super dangerous, we should do something about that.” Had this Utah incident happened at Homestead or New Castle, I don’t think this would even be a discussion right now. Yes, it’s an accident that still warrants penalty, but without the tires where they were, instead having plastic barriers and runoff area both in front of and behind them, there would not have been such a bad wreck for Driver B hitting the barrier.

I think we as an industry should be looking at the safety of the facilities we’re racing at. Rotax went to Utah like 10 years ago and actually went through the work to completely change the barrier system down the front straight for their race from what I understand, because they saw the setup that was there and decided it was too dangerous for the drivers.

There was a lot of background discussions regarding the tire wall and how if this incident happened at New Castle, it would’ve been a non-issue since there is nothing to hit, drivers would’ve just ended up spinning through the grass.

Hopefully the background work the series are doing right now will help alleviate and solidify stronger and more consistent penalties for things like this.

Driver B is a good friend of ours that got his start karting at our home track with our help. We’re just glad he wasn’t hurt more seriously. As Aaron stated, I don’t think it was a malicious move, just a move that has become “acceptable” and normal for the situation. I know that the move is at all levels of karting, as my daughter has said that she has had it done to her, but since she races for fun and doesn’t expect to “climb the ladder”, she will back out so she doesn’t get hurt or damage the kart.

Also, Team Principal B has apologized for his actions, not that it should reduce his ban or make his actions acceptable. I will also say that Driver B and Team Owner B had an altercation during the Winter Series where Driver B was pushed over in the scale line and retaliated and got DQ’d for the weekend and the Team Owner was not too happy for the DQ and complained very heavily to the series owner. This incident could have played into Team Owner B’s actions some, but never ok to do what he did.

I think we as an industry should be looking at the safety of the facilities we’re racing at.

I have wondered about this a few times myself. I do this with a hobbyist mentality and no ambitions of moving into the professional ranks, so I am not afraid of backing out in a hairy situation or yielding a corner to save my gear or my body for work the next day. However I have seen several incidents of tire barriers injuring drivers. I get it. They are cheap and abundant, but with so many other options out there I don’t understand why we still use tires.
This is not the best example, but illustrates my point: 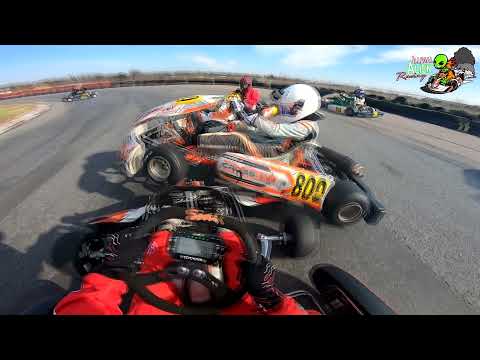 Its pretty typical to see a mix of plastic barriers and tire walls at most of the tracks we run. Given the example, more of the accidents resulting in injury or damage seem to come with contact to the tire walls. For what ever reason, they are in odd places. Why would you put a tire wall (a virtually immovable object) right next to the track surface? Wouldn’t it be better suited to end of a runoff area as sort of a last ditch border to a fence line or public space? The incident in the above video where the driver that Taco-ed his chassis after dropping a wheel was completely unnecessary. In another, you see a driver being flung from the kart as it gets hooked and spun by the tire wall. Karts by nature are not energy absorbing crash boxes like cars are built to be, so why are we still using old safety tech at our tracks?

Makes sense. The huggy barriers seem to do a great job. Tires piles are scary and they flip stuff.

Since there have been comments on this, and there was an earlier thread on it, I will provide an update. This weekend, I was able to talk to the team principle that was suspended indefinitely. He said that he got his letter this week from SKUSA and is suspended until June 12th, 2023. He effectively gets a 1 year suspension for his actions. I do not know about Driver A though. I did hear that Driver B (Cole Kleck) did get suspended indefinitely by SKUSA because of his social media post with the excerpt of the letter from SKUSA and that he posted the video of the crash. Watch what you post on social media.

This was all confirmed by the team principle.

Is this a recent development? SKUSA we’re pretty adamant that he was not “Banned” as of a couple of weeks ago.

From what I understand there is more going on in the background, so I think the situation is a bit muddier than what is presented to the public.

I believe it is more recent since he just posted on social media two weeks ago and SKUSA has a social media clause in their rules.

As TJ said, there’s probably a lot more going on that SKUSA isn’t saying for probably many reasons. I only posted an update because i personally talked to Trevor.