I am a new driver looking to set myself up to make my way to F4. I know that they currently partner with both WKA (World Karting Association) and SKUSA (Super Karts USA) as feeder series’s.

I was wondering which series is better for shifter classes, as I want to compete in shifter eventually. The difference is a difference of engine. It comes down to the IAME sse 175cc and the Vortex Rok Shifter or the Honda CR 125.

From your previous post, it looks like you’re on the east coast of Florida, where I think the Vortex Rok Shifter is most popular, maybe someone else can confirm, and the IAME SSE is almost non-existant.

My next comment sounds a little bit of a downer, but do a little research on karts to cars and so on, costs, how long people have been racing etc etc. I don’t know your level of skill, experience or financial situation but F4 is beyond most people wallets and winning in F4 is often preempted with a start in karting at 5-8 years old and a lot of success.

Its often a little easier on ones mental health to just enjoy karting and if anything comes from it great.

Right now the Rok Shifter seems to be the most popular shifter. 175SSE is struggling and they stopped making parts for the Cr125.

F4 is extremely expensive I hope you have some deep pockets for that.

I’ll start off by saying “why not both”. There is no versus. The Rok is certainly more pervasive across the US. Pick races that make economical sense for you. Also, strongly consider sim racing as a part of your repertoire. Race where your budget is biggest… ie consider 206.

The only thing stopping you from running F4 right now is money. You could (arguably) enter a NASCAR truck race if you have the budget.

Do karting for fun, gain experience, driving one of the most perfect handling vehicles around and make awesome friends. The ladder is paved with money and connections first, everything else is secondary.

Honestly, if I was aiming for a ”pro” gig in racing I’d reduce my focus on karting and keep spending to a minimum on it. Sure you see racers who started there, that doesn’t make it required and there are a lot of other factors that got those drivers to that level. For every one of those drivers there are literally 1000’s that spent too much in karting and ran out of coin before they could do anything in cars.

Focus on networking and relationships. Work with various teams. Build your own audience and help other drivers and brands build theirs.

Use sim racing as a tool to gain racing experience and also ride the exposure train while it’s rolling.

I wonder what the “ladder” for sim is and how it works. (Does it even exist?). Unlike Motorsport, money isn’t the limiting factor.
I am aware that there’s real competition going on in stuff like FPS and fortnite etc. I don’t know if there’s similar prize money etc in sim racing.

ROK is gonna be the hot ticket for bigger fields.

Much more compared to IRL racing in general, but you’re also competing against more people for it.

Lots of people do Sim Racing, so is it possible to make money from it? Yes! Aside from the Sim Racing Jackpot Championships, you could also offer tutoring (online, or in person), hire out your rig, or even design liveries for pro racers. There are... 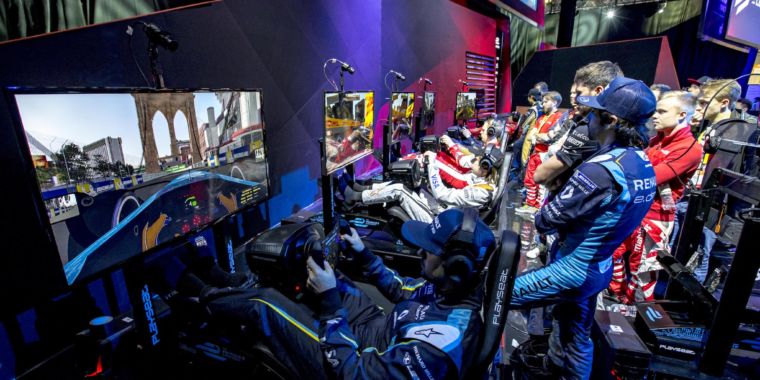 Exciting racing made up for bland graphics in sim racing's biggest-ever event.

Aha. Still small potatoes as compared to fortnite but still!

Cars suck go karts are cool, if you want to be cool you know what you got to do…

There is many differences between WKA and SKUSA. The rulebooks for one are extremely different and if I had my choice I would prefer to run under the SKUSA standard. In terms of which one will get you better recognition? I think it all depends, in many ways WKA has an advantage in feeding series like Nascar because it also supports dirt races. I do think that there is generally more money thrown at SKUSA vs WKA and that means more sponsorship opportunities IMHO. However, overall I think the importance of series isn’t quite as important at the karting level as it once was a decade ago. The most important thing is finding funding and generally speaking that is more important then anything else and results I feel are secondary to your following/influence on a sport/media etc.