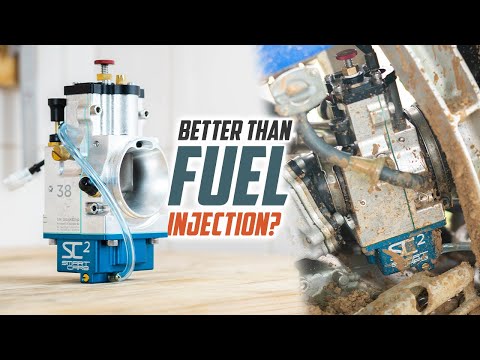 Since EFI isn’t going to happen in karting anytime soon, this looks like a neat option, & would be plug & play - if they had an applicable substitute for kart applications.

ETA, Smartcarb expects to release kart-specific SC2 carburetors by the the end of '22-early '23.

Neat design. That would be great for a CR125, at least for someone like me who hates messing with jets.

Since EFI isn’t going to happen in karting anytime soon

Wait what? Says who

Joking aside, I’ve seen a few CR125s on karts with this… I don’t know it went though. I moved to 2t category since it’s probably mostly going to be a thing for 2t

I thought about posting it in there, but went general just because it’s designed to work on both types.

At any rate, I didn’t know it had beeen tried on SM. Curious to find out how it handled being fed by a pulsd pump. I actually don’t see a 30mm version that could be substituted for the ubiquitous Dellorto 30mm used in KZ, though there is a 28mm designed for the smaller displacement dirtbikes, so I emailed the company about it. Fat chance, I’m guessing.

I thought about posting it in there, but went general just because it’s designed to work on both types.

That makes sense too, just one of those (many) deals that can be hard to categorize.

Newsflash: I just got off the phone with Corey at Smartcarb & they expect to release kart-specific SC2 carburetors by the the end of '22-early '23.

I mentioned the specific carburetor used on TM shifters that have 30mm venturi & he said they were aware & working on carbs for kart applications in that range. He mentioned it being a smaller market was the reason it wasn’t out as immediately, but said they had received inquiries, & it was in the business pipeline. Of course, it will be able to handle input from a pulse pump. I didn’t ask about price, but would expect it to be similar to the MX line.

Interesting. I was about to say that I wonder what version was one the karts I’ve seen with them… But I suspect they are all motos, so probably 38’s or there about.

Yeah, there are SC2 variants out for CR125 engines right now. The Dellorto variants are still in development.

Would be neat to see something like this become a common, accepted feature, particularly in the shifter class, but they would maybe be allowed in mod classes, even though they most probably will have the same 30mm bore size (if not shape) as the Dellorto, absent jetting hassles. I’m thinking KZ2/KZ1, but without direct mods to the engine, classes where money is already a thing. You get improved power & lower fuel consumption/emissions. The benefits are universal, really.

I know someone who rode a KTM fitted with an SC2, said it was noticeably more powerful & had a more linear throttle.

My Rok GP uses the Dell’Orto VHSH 30 mm carb. Is this the same carb KZ’s are using? Not sure the rules would allow a non-OE carb setup.

Yep, KZ uses the same carb. Rok rules don’t allow changes to certain aspects of the carb that you would otherwise be able to tune on a KZ, e.g. needle, slide, atomizer, etc.

“Theoretically” during a homologation year a carb like this could seek to get approved as the KZ standard carb, however it would seem very unlikely given how long they’ve used the same basic dellorto.

Yeah, I don’t see that happening, even despite the substantive & substantial improvements the SC2 offers. I bet money changes hands in the homologation process. Besides, Smartcarb is a US company, & there’s no denying that CIK is decidedly Eurocentric.

In the UAS dirt karting scene where you can do kind of whatever you want I’ve seen the Lectron carbs a fair amount, which seem to operate on a similar basis as the smart carb. Haven’t seen a smart carb in that area yet, but may at some point.

I spend most of time in the moto world…have never used one but know folks that have. Some love them some don’t. For the 36 mm which is best for hard/extreme enduro 38 in open fast riding. These sizes are for 300cc. The cost is around $700.

That’s the thing, they are really nice pieces of kit, but that’s a decent chunk of change and used ones are not super common.

There’s a price range. Some are ~$450 or so. It’s not cheap, but then, neither is a rebuild on a detonated engine. EFI would be a “dream” KZ motor, but I could see it adding $1-2K to engine prices, & as such, it’s unlikely the CIK is going to push that. This SC2 seems like it could offer a sound performance cost-benefit vs EFI.