Hello Everyone. I’ve posted a few times already with more specific topics. But, I wanted to create a thread that I’ll add too as I learn and progress. Hopefully, this will provide some context and aid to any others out there trying to find out what they need to get started. I don’t have all the answers yet but hopefully my experience helps someone else. I’ve found that karting experience is very regional and so all of this is from a south eastern US point of view.

About me: I’m a 30yo weekend warrior who sold his Miata to pursue karting. I can take apart anything but am still learning set up and maintenance specific to karting. I live in Columbia, SC. 1 hour from Carolina Motorsports Park and 2 Hours from GoPro Motorplex.

Goals for me in Karting:

-6 races a year w/ 6 other practice weekends.
-Run in the midfield.
-Have fun.

Goals for this thread:

-Provide a race/practice report after each weekend.
-Provide an overview of what I’ve purchased and provide a beginner’s budget one year after purchasing my kart (August 2022). 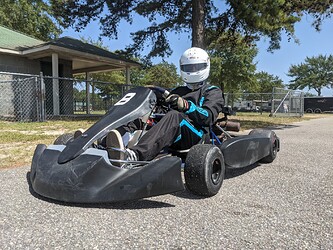 Location: CMP
Weather: 92-95 Partly Cloudy
Sessions: Managed 6 sessions at 6-10 laps each. Kart felt good, first day out. Stalled kart in first session due to revs dropping quickly around sweeping left hander. Tapped a girl in a cadet kart in 2nd session. She took a weird line coming out of the last corner onto the straight. Note to self: WATCH OUT FOR SWERVING KIDS. Started in the 1:02s, got down to 1:00 flat with consistent laps within 5/10ths during 4th session. 6th Session: developed brake issue, inconsistent brake pressure. 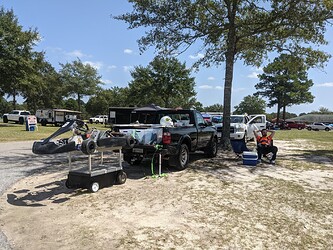 Friday Session: Goal was to get acclimated to the track before the race the following day. Brake inconsistency continued. Noticed it was different after left handers vs right handers.

Saturday: This was a double header race for GoPro’s Karting Challenge so it was Practice-Quali-Prefinal-Final-Prefinal2-Final2. I went under a tent for advice and set up help.

Quali: 3 seconds off the pace. Issues continued. Threw my chain on last lap, but not broken. Discovered Brake rotor was misaligned, straightened that up after session.

Prefinal: Received warning for avoidable contact turn 4 lap 1. I tried to follow someone through on an inside pass but I was a little late. Got closed off and caught guy coming over. No accident but held him up. DNF: Stalled on last lap, tried to restart but pull cord locked up. Had to disassemble starter and fix w/ help of tent crew.

Final: DNF: Threw chain again on sweeping left hander. PROBLEM DISCOVERED! Axle was moving side to side due to loose set screws. CHECK YOUR SET SCREWS! trial by fire I suppose. Realigned axle, rotor, and chain.

Prefinal: Shaved 2 seconds off my best time. Thank God we found the issue. This is the kind of basic stuff that comes with experience I suppose. Rear was way more predictable but still a little loose. We decided to narrow the front a bit to help lock up the rear.

Final: Ate a barrier at the turn 2 chicane lap 1. They have a lightweight plastic barrier to keep people from cutting the chicane. I tried to hang it around the outside and got sent. No damage, the drop bumper took the impact. Ran “practice laps” by myself afterwards. Kart felt locked up. Another .5 seconds off my best.

Overall I had a lot of fun. Ran in the back all day but I’m starting to learn what to look for and finding my rhythm. 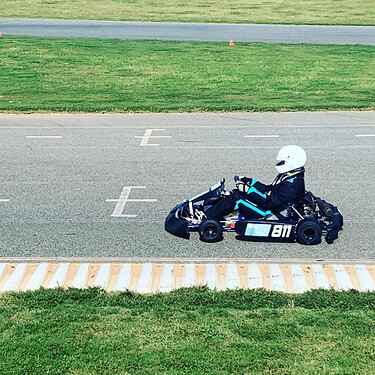 As soon as you said the brake problem continued and it was different corner to corner and you were throwing chains, I was like “axle is moving”, nailed it! Set screws tend to work themselves loose sometimes as the axle gets heated up from braking and friction. I always dab some Loctite on mine when installing, and I check them before every session.

Sounds like you’re learning a lot of lessons quickly and having fun and that’s really all you can ask for.

Agreed TJ…Another trick I have stated doing with bearing set screws. After they are set run 2 or 3 revolutions of black tape on top of the set screws as tight as you can. This has worked well for me.

BERT:
What class are you running?

Do you think your stalling issue is reated to your axle moving or is something else going on?

Aha! Another race blog of sorts. I approve! I love hearing bout how folks experience Karting and how they develop.

“Note to self: WATCH OUT FOR SWERVING KIDS.” -Yes!

Is there racing at CMP yet? If they still haven’t found a race director and crew, the East Lansing folks are up for a vacation at the end of the season.

I was there this past weekend. I think? I met the new director. They were running rentals again. About 6 of us owners there for practice. They rent out the track about once a month for minimoto. I think they’d be open to whatever if someone helped promote and organize it.

Briggs Senior/Heavy. We flushed out my carb after one of the races and haven’t had a stall since.

I was able to get in 4 sessions at the track this past weekend. Main goal was to get used to my new race computer. I sprung for an Alfano 6. I mainly went with this one due to the apple app and instant download after the session. I found it very helpful. Here are screenshots from the sessions.

My main take away was that carrying speed though technical sections really improved my times and consistency. Even if I was less aggressive on the brakes. However, I was rather frustrated with how twitchy the rear end is feeling. At this point, I’m putting it down to seat time and not being good at warming up tires.

I also took one of my seat struts off the last session at the recommendation of someone at the track. I was able to get my best time but I was much more inconsistent with three offs. The track was cooling off with sun going down. Need to try again with similar conditions between sessions.

Screenshots from my sessions: 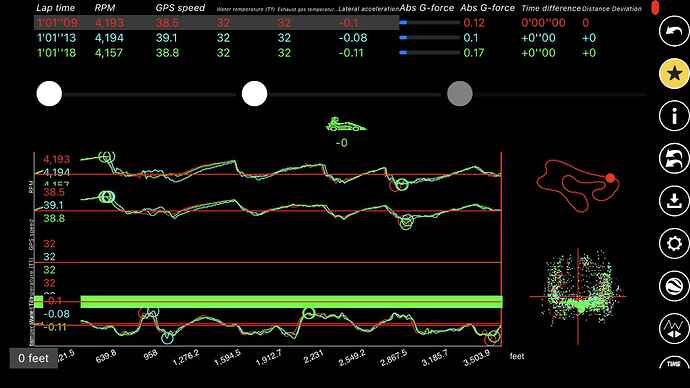 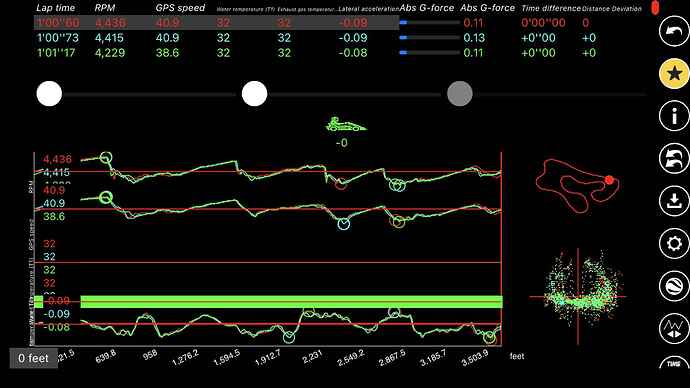 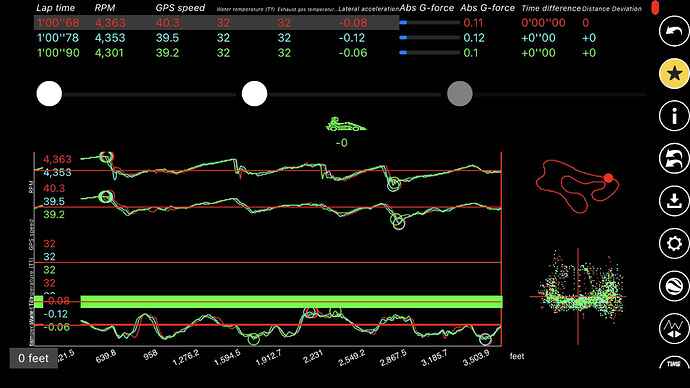 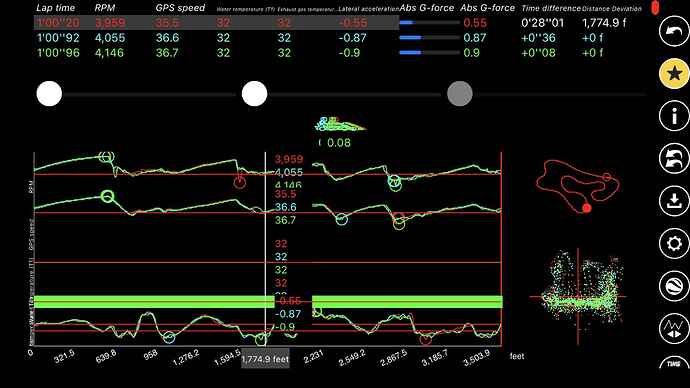 My main take away was that carrying speed though technical sections really improved my times and consistency. Even if I was less aggressive on the brakes.

By this do you mean trying to carry more speed into corner/turn in?

Yeah, I think at first I was too focused on hitting the braking point (still important) instead of looking ahead and setting myself up to carry speed into the turn. I think that’s what I mean about being “less aggressive on the brakes”. For example the last corner is almost flat if you set yourself up right and look ahead instead of staring at the turn-in point.

I don’t know if that makes sense.

To me it feels like getting the braking point 90% right by braking a little early and then getting corner shape and speed 100% right is better than visa versa. Obviously 100% for both is ideal.

Braking is an ongoing thing for me. I can relate.

It’s true that being a bit earlier to brake, a bit less hard, can set you up nicely for the turn and allow you to comfortably roll speed into corner.

It’s also true that that lengthens the braking zone and makes you a bit slower.

That being said, there’s a trade off, at least in the earlier days. It’s probably better to be a touch slower and consistent than trying to late break everything perfectly.

I wouldn’t delay too long though, on figuring out how to be firm and later to brake. Wouldn’t want to make a habit of being too gentle.

Something to consider as you mess around with braking: the release.

How quickly you release brake pedal has a bearing on how the kart behaves. Try messing with fast and slower brake releases. Also, try releasing the brake a earlier than you think is correct and see how the turn goes. But do this with free space.

In general I think folks dwell too long in the brakes initially. The release is as important as the intital bite. Starting braking sends a wave of energy forwards. How hard you brake, initially determines the rate of forwards balance. How you release also has a similar (but in reverse) effect. Release settles kart back onto the 4 wheels. Quick release sends it back faster but can also upset kart.

For example the last corner is almost flat if you set yourself up right and look ahead instead of staring at the turn-in point.

As you approach the turn, observe the things that matter once: the braking marker, the apex. But as you begin to brake you have moved on visually. Last glance at apex and shift attention to where the kart needs to be next.

Do not focus on the apex. Do not focus on anything for long. Look through the turns and the other drivers. Sight what you need to see and your brain stores its location. Keep your vision active, moving, and ahead.

Seeing the bigger picture mid turn makes things easier. Staring at an approaching apex will just result in “what next”.