I’ve had a few comments made to me recently making me question some equipment selections I’ve made. All of them with the context of “that selection would be right if you weren’t on hard tires”.

Examples:
We also run that cut axle as our default, but go back to the full length axle for “those tires”

MXC’s and MXL’s are superior wheels, but not on those tires we were always quicker on MXJ’s wheels with YLC’s.

So that leads me to wonder what other assumptions I might have made on equipment that doesn’t necessarily follow standard practice “because of hard tires”.

The hard tires are compounded by a low grip track. The current struggle is to get chassis lift. I’m going to add caster and front width first to see if that gets me the leverage needed for more lift.

The good news is my Pace isn’t bad right now but could always be better. I do get hopping in a couple of spots but it’s pretty limited.

One thing to note when you are running harder tires and on a green track (like club racing) is that you might not get the kart to lift and work exactly how you want, simply because there isn’t enough force being generated. When we ran YDS tires (significantly harder than YLC), our goal was more to get the kart to slide ever so slightly, because that was the only way to keep the inside wheel from scrubbing in the corners, because it would never lift.

I question the hopping you describe. On a YLC with a baseline OTK setup and a low-grip track, I’m not sure how you could be hopping, and if you were, that would mean you are definitely generating lift. What tire pressure are you running, and are you sure it’s not just a rough track causing the hop you’re feeling?

If the MXJ is helping, that makes sense, because it’ll generate more heat and grip, so that would be a good wheel for the conditions. The cut axle would help in low-grip situations, so that would be my default axle (and actually is for most conditions) in your situation.

The rest of your setup sounds like it’s pretty close to where it needs to be. I understand you’re just asking this for your information and knowledge, but I would caveat all this for others with the notion that you shouldn’t be chasing some arbitrary time just because paddock talk has you thinking your setup is wrong. If your pace is good then I wouldn’t worry about what you “should” or “shouldn’t” be running for a setup, and rather just focus on your individual handling deficiencies. We used to get a dozen setup opinions from a dozen people in the paddock racing at the club, and it was all different advice.

With your driver size, you’re basically perfect for low-grip situations, as you’ve got the body weight to toss around and work the kart. Keep that in mind as well, because you might be able to run a more normal setup than others since you can adapt the handling with some body english too.

My advice would be to test the caster and front width, as that would be a normal setup change to increase the kart’s ability to lift, but remain focused on perfecting your own individual setup and don’t worry too much about what setup other people think you need to run.

I’ve been going out around 12.5 cold. Our laps are only 40-45 seconds and we only run 10-12 lap races. I found when I tried to go out at 11, esp on the MXL’s that I was off the pace for almost 3 laps waiting for the tires to come in. Thankfully I was able to hold the lead in that situation but I don’t plan on going out that low again.

For the most part the kart slides controllably at the rear the way it’s setup right now. When I get hopping it’s coming off of a slide.

I do need to work more on using my body weight to my advantage. I’ll remember that. Need to move the foot bar a little so that I can better utilize my legs to help push weight in the seat as well.

Thanks for the feedback.

Don’t be afraid to go up on tire pressure a little too. On Cs you can go higher I think, but maybe someone who has run them more recently than I have can offer more insight into what range they run them in. It’s been probably 8 or 9 years since I’ve run Cs.

I’d like to tag along with some questions. I have a similar setup but ‘15 OTK chassis Yamaha SR-Y pipe. I only run 2 rear bearings, the 3rd is completely removed. One seat stay motor side and I’ve experimented with 1 or 2 stays on the brake side.

I have 3 available axles: the stock OTK N at stock length, a Vemme medium cut to 1000mm, and a stock length OTK H axle.

Our track is much shorter and tighter than a track like New Castle (although we run there sometimes too). In some testing for one of our tighter configurations I found the hard axle to be faster by a couple tenths. Would the harder axle be the better choice for our shorter track? Or should I still consider the N as the primary and only change it if I’m having issues? I know a lot with Yamaha is trying to keep the kart as free as possible and wasn’t sure if the harder axle was helping with that.

The harder axle is going to free the rear up, so yes it may be helpful in your situation. I have lots of clients ask which axle they should run at each track, but my preferred method of working is to always start with the N and only change if you feel like you have an issue. The N is a known quantity so starting there every time helps you have a consistent base to jump from.

Now if you’re running at mostly one track all the time and the H is working better every time you put it in, you can designate that as your standard axle for that track. But until you’ve established that sort of correlation over several races, I feel like it’s better to just start with as close to a baseline setup as you can get and addressing any problem as it arises.

I’m guessing you mean Whiteland? You’re pretty spot on with removing the third bearing, although I never ran seat struts in general when I was in Yamaha. On smaller tracks when we were on OTK, a cut H was our go-to axle, with the N usually being used when the track had significantly less grip than usual. We found this over time, however, and your experience at that track may be different. If you’re finding that you consistently need the rear to free up with the N, I would then look at going for the H axle.

Two other tricks we typically found useful mostly in Yamaha was to mount all the weight as low on the seat as possible, and to raise the rear axle/lower the chassis in the back. These both helped with keeping the rear end free in Yamaha but i have not experimented with them in a KA100.

One point I will note with my experiences while on OTK was that my chassis was also significantly worn compared to most. I had a 2012 Kosmic back in 2017 and had to weld that thing probably every weekend, which leads me to believe that the kart was not handling exactly the same as a “typical” OTK. However, our tuner at the time was working with multiple other OTK chassis and had the same results with those as he did with mine.

G&J in Camden. We may venture to Whiteland this year too though and I would venture a guess that they both have similar levels of grip and both run YLC as spec tire.

This is the hardest part of karting. I have largely stop asking and listening to others’ opinions. I put together my baseline settings [that I got from the manufacturer] + a comprehensive set of chassis adjustment notes and a set-up database from my prior races – everything is in a Google Sheet. Before, I turn up at the track, I go with the baseline settings slightly tweaked to suit the characteristics and condition of the track that I expect on race day.

Here is my info for my Compkart Covert 3.0. 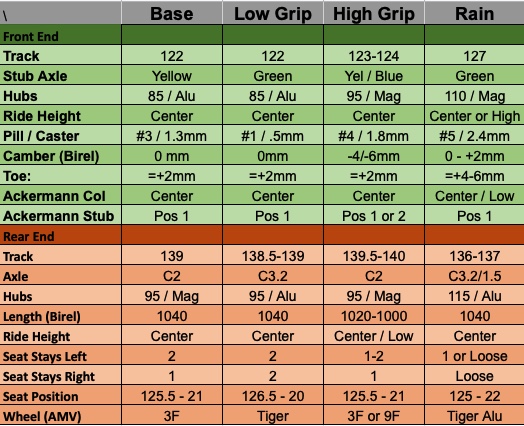 I love hearing about other people’s setup changes, and tuning theory, but you certainly have to take it with a grain of salt. It’s very easy to misinform yourself by comparing your setup to someone else’s.

I think you’ve got a great system there, with some clear logic to guide you through some common scenarios.

For anyone struggling to find a baseline, it’s always best to start with what is recommended by your manufacturer/dealer, and then lean on a trusted source (generally a dealer) to guide you towards common changes for certain conditions, what conditions you’re trying to fix with those changes, and what results you can expect from those changes.

It’s very easy to over complicate, and the most of the time you won’t hurt yourself by setting everything to baseline and just working on driving. It’s what’s between the ears that counts.