I race a Vortex ROK GP. The track recommended I run the Sunoco Standard 110 octane leaded fuel. The track is now carrying VP Racing Fuel VP 110 as well. Which is better? Are they similar? Is there a preference with using one vs the other? 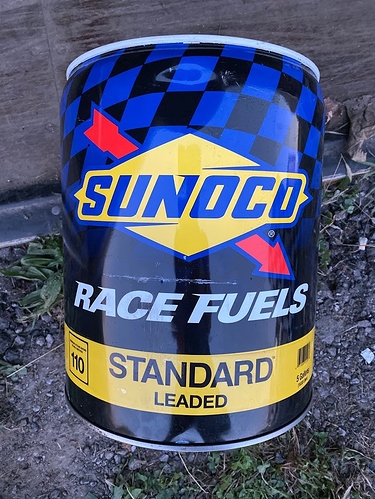 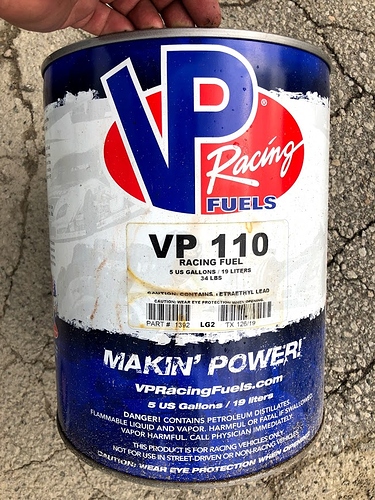 I’m in Canada, so I have access to Petro Canada Ultra 94 - 94 octane pump gas (the highest octane in Canada), or Shell V-Power Nitro+ 91 octane pump gas. Both fuels are unleaded.

Will the lower octane pump gas damage my motor?

So many questions, I hope somebody can help.

The lower octane should be safe and possibly make more power compared to the 110.

One thing against the lower octane pump fuel is that it may have ethanol in it. Ideally you want to run ethanol free, especially for racing because ethanol will trigger a fuel meter when tested.

It’s important to consider that octane is only one amongst of properties of fuels. The main consideration in using racing fuel is consistency across batches which far exceeds that of pump fuel.

On the two racing fuels compared, I guess you could look up the specs and look at volatility, vaporization etc. But it might be easier to just test them.

Really it comes down to the application. If you’re getting practice in, the pump 93 might be fine as long as you have a fresh source. However for racing you might have no choice but to run leaded should fuel testing mandate it.

Lead is kind to bearings, smells really nice and does give an extra layer of protection, especially in aircooled engines which see higher localized temps. It’s also a carcinogen of course.

Lastly, make sure you’re comparing like with like in octane ratings. Sticking with RON is a good way to go.

Hijacking the thread a bit but…
It always amazes me that in USA and maybe Europe, it seems that the majority of competitions are using dedicated race fuels.
Here (Australia) 99% of competition is done with Premium pump fuel, usually a 98 octane (RON) from the closest mandated servo. The AKC does allow for use of race fuels, I’m not sure how many competitors use it though.
It just seems like an added cost to me, I regularly fill my car with 98 because its not that much more expensive then 91 and you can recoup the $5 a tank increase in cost with the increase in fuel economy.

Are race fuels more expensive then normal fuels in the US, if so what is the price difference?
Or is it a quality difference? I have never had issues with whatever pump fuels we use here and if everyone is running the same whats the problem?

There is a HIGE price difference, hence the reason for my original question. If the pump gas (rated slightly lower than the Vortex recommendation) will not harm, or damage my motor, or give the kart significantly less performance, I want to switch.

Note to self: Don’t move to Canada

Bill, how do they test / regulate fuel in racing then if you are allowed to use any old fuel out of the pump?

In the US each refinery is going to use a slightly different detergent package, different ethanol content, etc. This makes it extremely difficult to test for anyone trying to cheat with fuel if there’s no consistency in the base fuel used.

The race gas is a necessity to get that consistent base fuel meter reading so that there’s no question when a fuel deviates from the base reading that there is an issue with that fuel.

So we pay for the shenanigans of others. Grr.

I take comfort that my ECU will adjust for the lower octane.

same here, I bought my kart at eastern creek, Sydney and they recommended I just use 98 octane and add oil. I have seen some people at the track bring their own VP drums.

“Any unleaded fuel, specific gravity between .67 and .77, water-miscible components up to 20%”

Although I favor C12 for jetting consistency, I’d run ‘em both if need be.

@Andy_Kutscher
Ill start at the beginning, of how events here are organised, apologies if this is known or not relevent.

All events here from club level through to Australian Kart Championship (AKC) have a document that is produced by the organisers called the Supplementary Regulations.
In this things like track direction, paddock allocation, club rules,and names of officials, are all clearly stated and runs to about 4 pages.

In this document it will state whether Control fuels will be used.
If control fuels are not being used the competitor is free to decide where they are getting fuel.
Generally this is only done at club level and technically a competitor could go out and find some form of high performance fuel, but it would be looked down on, as not in the spirit of the sport if found out.
I would also say that in 4 years of club Kartinig I have never seen fuel tested, but I am a member of a small club (30-40 members). I am sure that some larger clubs would occasionally use the State associations fuel test equipment.
I doubt that any club in my state would have their own fuel testing equipment, as it is too expensive.

So for bigger events “Open Meetings” including state series and championships the Sup Regs will mandate the use of “Control Fuel”.
This means that a Fuel station will be chosen close to the track, sometimes a club sponsor, to be the fuel supplier.
Part of the club organising this will be coordinating with the supplier about which pump is to be used and that one batch of fuel is delivered to that tank for the duration of an event.
A sample is taken from the pump, and every competitors fuel is tested with a machine against that sample.

I don’t know exactly what the test is picking up to be honest, other than the sample has to be within a range of tolerance that is about 3 points of something. I do know that we have a list of approved oils that have been tested to not increase performance/octane rating? as some will spike the machine.
Fuels are checked randomly throughout the event, after a race and deviating fuels gets you a DSQ from that portion of the event.
At the major events the first 5 finishers are pulled aside for tech which includes fuel testing and pretty much a complete tear down of the engine.

DSQ for fuel does happen occasionally, but not very often. My impression here at least, is that people try to be sneaky with engines more than with fuel or tyres (we use tyre sniffers and bar coders at big events too)
Most common tech issues would be squish, drilling out jets, and ignition timing.

You would have to be some sort of low individual to try cheating at club days, what a waste of effort.
You WILL get caught at open events. The tech guys here are really good, if something looks off they keep digging to find out why. Fathers are the biggest problem. Its hard to say that as one myself, but some will do anything to get their kid on the top step and all it does is hurt their child who knows nothing about it, which is very hard to watch.

I found this RON to AKI conversion blog… interesting stuff.

I’ve got my last pail of VP fuel, then will switch over to Ultra 94 AKI, which meets the ROK’s RON requirements.

Thanks everyone for the informative discussion!

I run a KA100 motor and tried both pump gas and racing fuel. Initially, I ran racing fuel, then switched to a club that allowed pump gas, so I went to pump gas. After running pump gas for 6 or 8 races, my engine builder looked at my motor and he felt that it might be better to run racing gas. It does seem to run better but this all qualitative. The KA100 uses very little fuel per weekend maybe 2 gallons, so the cost is really not that much of the total cost of racing per weekend.