Ran another enduro on Sunday and took a new idea out with me I thought I throw to you guys for comment.

TJ said something a few months back about ‘shocking’ the kart into a corner, which got me wondering whether it’s what Ive been doing. In addition to that, I found this recently, and both were on my mind while I was driving: 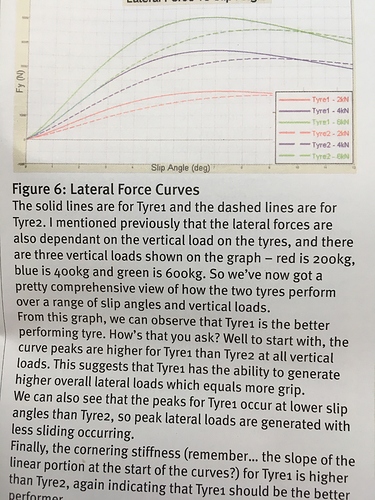 Dunno to what extent it applies to kart tyres, but I pretended there was some relevance, and found myself using a ‘quick on the brake’ and ‘slow on the steering’ technique. Meaning:

It was hard to do and I never really got it right. And I’ve no idea whether it would have worked even if I had gotten it right.

I was recently talking to @chris1388 about some on-board videos from Norberg and Woods-Toth from the latest Winter Tour races, and he mentioned that both those very quick drivers looked less smooth than he thought they would be. I had mentioned that I thought they were smooth, but their hands were definitely quick. They just had a really good feel for where that traction limit was, so they could make quicker more aggressive steering inputs and not go over the traction limit of the tire. And of course that technique doesn’t work for every corner. A slower, tighter corner they might slow their all their inputs down more, as the kart is requiring more steering and braking to get around the corner. In a fast corner, a driver with a good feel for the tire’s limit might make up time on a lesser driver because they can flick that kart around quicker, with more confidence, without going over the tire’s limit.

When we are looking at it from the perspective of actual tire grip and we remove the other variables of chassis lift, in the end your goal is to keep the tire on it’s limit through the corner without going over. You want to use all the tire. But that’s very base/surface level. Some situations might require you to go over or under the limit of the tire in specific corner complexes or in actual racing.

Not sure if that’s the kind of comment you were looking for Lee, but hopefully it was relevant.

This is interesting to me in that it sounds similar to something I was working on at PFI in sim last time I was heading up the boards.

There is a large radius 180 at the end of a long straight that did not respond well to traditional braking. So instead of the traditional quick, hard brake, I’d do a long slight reduction in speed to carry maximum roll into corner and carefully catch the momentum coming out the other side. The opposite of what you describe.

“(trying to find, and not exceed, that sweet spot of maximum lateral force shown by the graph)” …
Is exactly what I was trying to accomplish. I wanted to be using 100 percent of tire laterally loaded at and through turn in.

So, it worked sorta, for that particular turn. But in the end I found that returning to the more normal larger speed dump and quicker energy cycle was more relevant in the majority of turns.

However, the act of learning to try to load up the tires completely at entry is valuable in that I find myself more able to make more subtle decisions around braking now. I can vary how much braking and entry speed I want to carry based on lots of mucking about with this.

My general observation is that the braking bit depends on what the corner requires in terms of rotation. Sometimes you can lengthen the energy cycle and sometimes it’s fast. But generally, it seems that the less time you spend braking, the better. Short sharp is great if you can keep the kart stable and manage a good turn in. It’s more violent and harder to repeat the smaller you try to make the braking.

Not what you were asking but related, I think.

TJ: reading this reminds me that the tire has 2 limits - It’s grip limit and the rate at which it can find its grip limit. I guess the latter is the ‘quick hands’ you describe. it seems reasonable to think a kart tire can get to its limit quicker than a street tire, and is more conducive to a ‘backing it in’ driving style.

Slip-angle graphs of kart tires must exist somewhere. Have you seen any?

Dom: I suspect we are talking the same language actually. After trying ‘quick feet and slow hands’ for a while I reverted to quick hands like you did - just feels more ‘right’ that way. And ‘catching the momentum’ on the way out is what I do when I’m attempting to get through a corner I usually brake for, without touching the brake. I’ve used this to turn the 5 braking points that most guys use on my track to (on a good day) 3, which feels like a pretty big deal. Maybe give it go next time you’re doing that gradual bleed off of speed you describe. I found Eliminating a braking zone does good for my confidence and (maybe) my lap time.

Also, if you have any kart tyre performance graphs stuffed under the pillow you sleep on (you know - osmotic knowledge transfer) please share.

What’s odd is that carrying higher entry speed is not supposed to work. If you will recall we did that thread where I asked is it better to go 75% in 100 out or 90 in 90 out. the consensus from the wise people was solid nope.

I dunno why but I’m some cases a deliberately slower bleed off of speed that allows you to catch the momentum as you throttle out seems to work as well as an aggressive rotation into the turn and power out.

I can’t remember that thread lol. It would entirely depend on what comes after the corner, if its a long straight to want to maximise your exit, if its another corner you’re aiming for the entry to the next corner (in most cases).

Driving style changes with conditions, or whats going on in the race. The Norberg/Woods-Toth shows some fast hands because they are in a last lap battle, I bet their laptime was terrible. I watched some footage from earlier in the race and its smooth as butter on turn in, in most corners. You’ll find them being aggressive with steering on the first lap or two as well while they get heat into the tires.

Carrying higher entry speed works when the track has grip. Low grip, carry lower speed in and power through the corner with rear slide. High grip, you just can’t do that, you can’t slide the rear. So you carry high speed in, three wheel for longer, then apply the power (in many cases way past the apex). One of first things drivers do wrong when they first encounter real grip is to put the power down too early which is typically following by a big chunk of bounce and hop ending with a bog and really slow exit.

When I worked this out it was like a light bulb, it turns you from a good club racer to a region or national level driver. Lots of drivers just work it out without thinking about it (which is annoying for people like me).

Carrying higher entry speed works when the track has grip. Carry lower speed in and power through the corner with rear slide.

I think that’s at play here. I am surfing the simulated rubber laid on track. It’s highly gripped up and I am not sliding at all. I can go in hot and stay on the limit. I want the throttle out to be seamless.

That should have said:
Carrying higher entry speed works when the track has grip. Low grip, carry lower speed in and power through the corner with rear slide. High grip…

Mhm. Someday I want to race a big event with rubber laid down IRL. If flummoxes folks and appears to be an interesting tuning/driving challenge.

@Motormouse this reminds me of your previous post where we discussed the aim wide and hit target idea. No brakes.

Also, if you have any kart tyre performance graphs stuffed under the pillow you sleep on (you know - osmotic knowledge transfer) please share.