The time you ran out of talent or most embarrassing moments

A FB convo with @KartingIsLife is the reason behind this one…

We’ve all done something that when you look back at, you can laugh. Let’s hear the stories.

There was a time Randy let me race his kart. Put the big boy seat in it and was going to set the world on fire… In practice ran out of talent and exited turn 3 backwards. Next lap through turn 7 there was a cone randomly placed mid corner. Odd… After exiting to the scales one of the Parents comes over laughing. Seems, some how, in my spin I picked up the cone on the rear bumper and placed it cleanly right side up a few corners later. Brilliantly ignorant show of perfection. LOL

I still remember going past the cone in 7 and thinking “Why the bleep is there a cone in the middle of the corner!”

Around 2008/09 I qualified pole for the Manfacturer’s Cup race at MRP. Won the pre-final running away. Came down for the green in the final, got through turn one cleanly with the lead, and as soon as we got to the Esses, I accidentally locked the brakes up really hard and slid right off into the cut-off. By the time I got back going and got my tires cleaned off, I was in 5th. Ended up finishing 3rd I think, but had the fastest lap by a fair bit, so it would’ve been hard to beat me on that day. Fortunately for everyone else, I beat myself!

Another good one that springs to mind is when I did a similar thing in practice at Norway in Yamaha Pipe, probably the same year actually… Came up behind multi-time national champion Corey Reeves going into the hairpin at about a million miles an hour, totally missed the braking point, and locked up in a miraculous cloud of smoke, shutting the engine off in the process, and coming about an inch from completely wiping Reeves’ back bumper out. Needed new underwear when I came to the scales.

I’ll never forget, Dennis Reeves looking at me as I came off the scales, I’m sure my face was bright red, and he goes, “Well that was pretty stupid wasn’t it?”

I have so many I’ll have to think about it

Oh man, my first race ever comes to mind. This was 3 years ago, and I had made it through the entire day without crashing, which was my primary objective, going into the final. I survived the start, kept everything together through the race, then on the last lap I looped it right in front of everybody at turn one. That was the only time I’ve gone out there on my own, and I felt so bad. 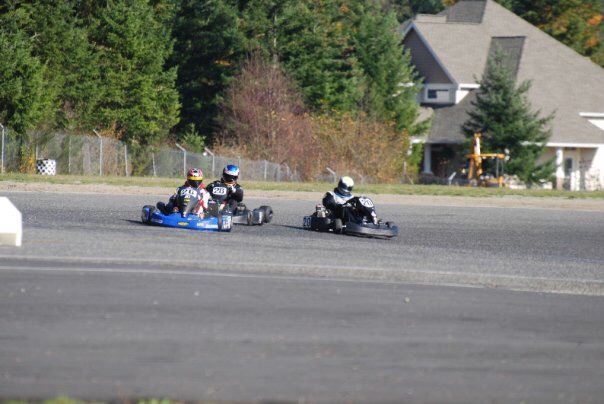 -There was the time I forgot to tighten the lugs on my rear wheel.

-The time I managed to look down at my Mychron gauge mid corner to check my exit RPM and drove right of the track.

-Probably many more that I’ve blocked out too, but those are the ones that come to mind.

I had just finally purchased a battery powered impact driver and was using it to put the wheels lugs on.
As you can see the impact did a crappy job of keeping the wheels on. It only took me 2 or 3 races to figure where the loose nut was. 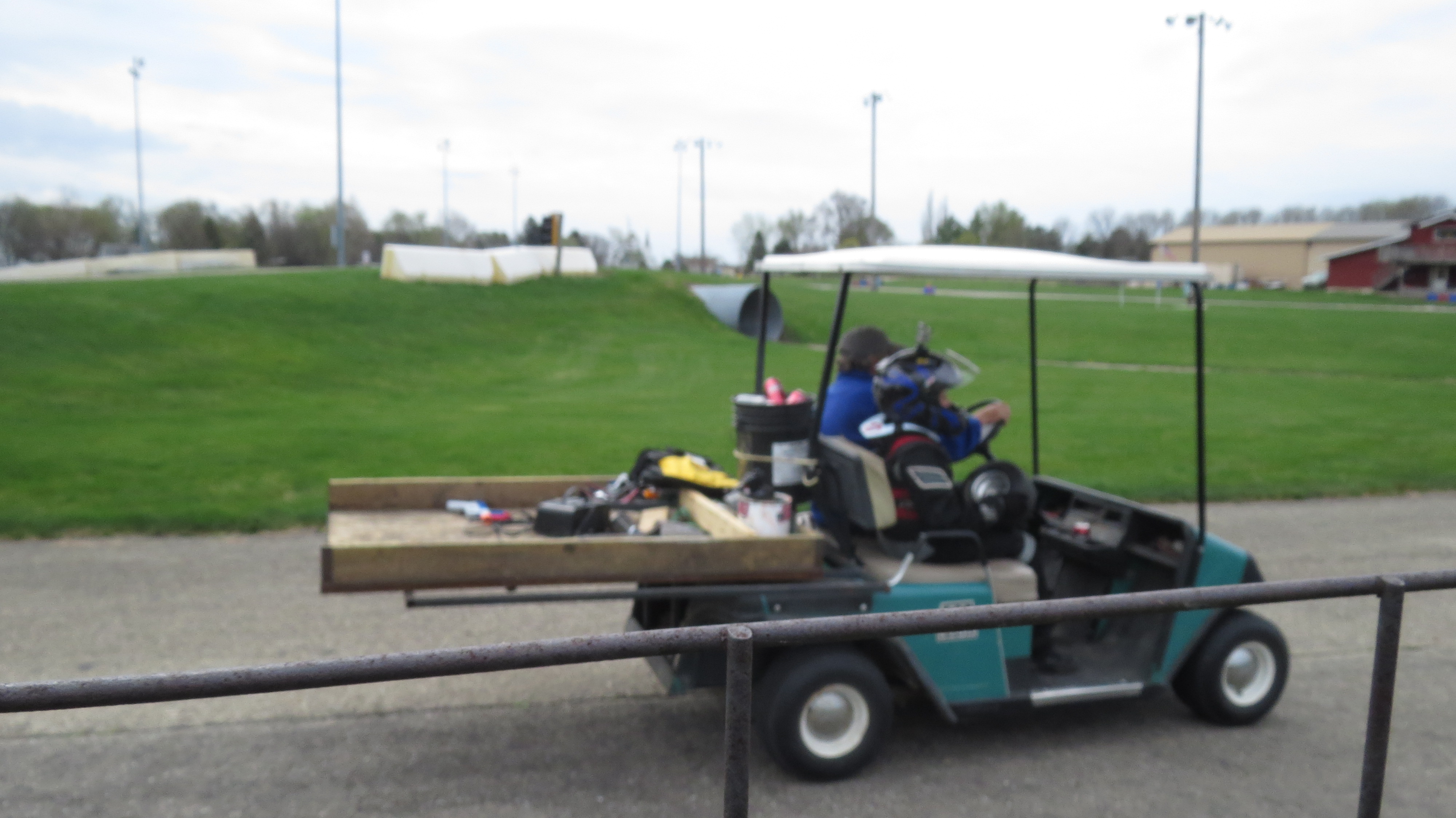 Another loose lug guy here, the part that makes it worse is I could tell something was wrong for probably 2 laps and I chose to ignore it

At least it made for good video!

One of my goals going into karting was never loose a wheel or have stupid DNF’s. I have never lost a wheel on my kart or any I worked on. At first I would have the kart driver or dad check after the final tightening - if a wheel came off they also checked them. I got the a nickname “The Finisher” almost immediately. First race I got airborne by the guy that sold me the kart, he was DNF on the spot and I only lost 2P. On a KT100 I had a clutch failure and still coasted back to the pits.

Fast forward a bit. recently @ a TnT I lost a clutch on an LO206. Coasted back to the pits. When I say I lost the clutch all I recovered was about a 1/3rd of it. I am glad no one was hit and I did walk the track searching for the remainder.

Last race: Double header in rain. LO206
Saturday - had my issues, wet, cold, nasty final. I was disheveled afterward. Changed oil at the end of the day while cold/wet, hungry, miserable and just wanting to go home and have my wife asks “Aw, are you crying, why you crying?” That sort of vibe.

Sunday - First session on wet track. Start noticing a sheen on the track. It is getting worse with every lap. Decide to get off line a bit and try some stuff. Decide to get off as it is getting pointless. At the scales tech guy notice water is beaded up pretty extensively on my kart. I somehow didn’t get the fill plug right on the LO206 and I was the one putting down the oil. Felt like an idiot. Not one of the other racers made a big deal of it at all. Race director even sugarcoated it at the drivers meeting. One told me I had a nice line going. Motor lasted the rest of the day and seems fine.

Well gotta go - need to figure out how to safety wire some fill plugs.

One time when we tried the Rotax thing about ten years ago, we mixed gear oil into the gas on accident. The bottles were similar looking so it was an honest mistake… Kart ran! Not great, but it ran.

I will confess I did forget the transponder for qualifying…

First time away from Road America and had never done qualifying before. Lined up like a normal practice and as the kids were leaving the grid someone jokingly yelled out, “at least I remembered the transponder this time”

I will actually put on the transponder when we load up to leave now. Not taking any chances of being the dumb Dad again. LOL

2016 pro-tour in Newcastle, thought I had enough time to get a little sleep before the morning warmup and ended up sleeping through the entire session. no-one could find me upstairs in the trailer. let’s just say my dad wasn’t the happiest camper

As driver, driving straight off the road at the second corner coming out of the pits at Brand Hatch in Formula Renault. Not tightening up the spark plug for a final, then trying to hold it in with my hand (doesn’t work).

As a tuner, well. Not tightening up caster camber kits (driver didn’t notice), having a driver underweight in qualifying (by 100 grams) when he qualified top 5 in a euro (they let us off for margin of error of the scales).

I am not saying I haven’t run out of talent mid corner I just don’t have any good ones. Probably had my eyes closed anyway . . . .

I hadn’t raced in a while and did forget to go through the scales once. I was really thinking about what to change on the kart.

I made a habit of putting my transponder on as the last thing before leaving for the track.

About ten years ago I had my first sniff of a victory after years of struggling midfield. I was catching the leader with a few laps to go but I was unable to pass on the main straight. So I decided to put all my money on the final corner of the final lap. I took a different entry in order to have the inside line at the exit of the final corner. The leader read my intentions and squeezed me a bit. I ran out of road but refused to yield. Wheels touched and before I knew I was on top of him. I frantically waved at him to keep going because we were being catched by the pack behind and the finish was just 100 meters ahead. So he was wobbling towards the checkered flag with me on top of him, with hungry lions behind us. We were caught right on the finish line. I ended up being third but just 7 hundreds of a second behind the eventual winner. After the finish we seperated the karts.

Going through 100s of videos, came across this little montage of mine from 2013. These are from a single weekend… (Doesn’t take much for me to run out of talent)

In my defence, the kart does look like it’s handling a bit evilish.

Looked like a handful. I know I puckered a little when you were headed toward the tires barrier!!

Such an angry kart!

Yeah that one where I’m headed to the wall, here’s the rest of the story: 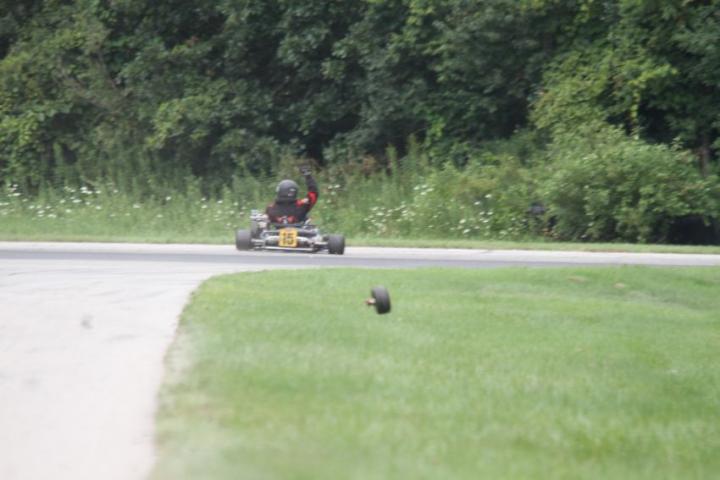 RF rotor exploded at about 90/95. When it did so, in a split second the remaining part of the rotor grabbed the caliper and tore the entire spindle shaft clean off.