So I was looking at data for a couple drivers over the past weekend at the SKUSA SummerNationals. One of them was in X30 Senior and ran about front-midpack. By Sunday, we had the kart setup very well but unfortunately there were a couple accidents we got caught in and couldn’t make the final, but he was absolutely driving the best he had all weekend. The other was a driver in X30 masters and was up front both days, ran second for most of the final Sunday but unfortunately I think had the kart drop off on him with about 2 laps to go.

After the weekend, I went onto the RS2 Analysis software and setup the GPS trace. One of the options there is to have a color gradient on tracing line according to a sensor readout. I had setup the lines to read out based on acceleration and deceleration along the track, and it looks like this: 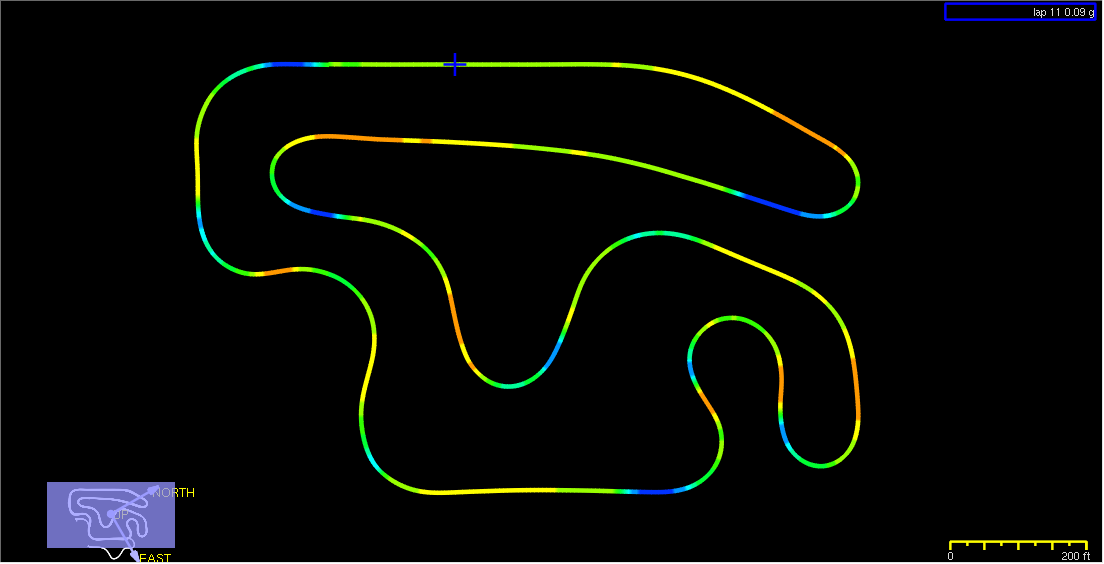 This map is from my X30 Senior driver. 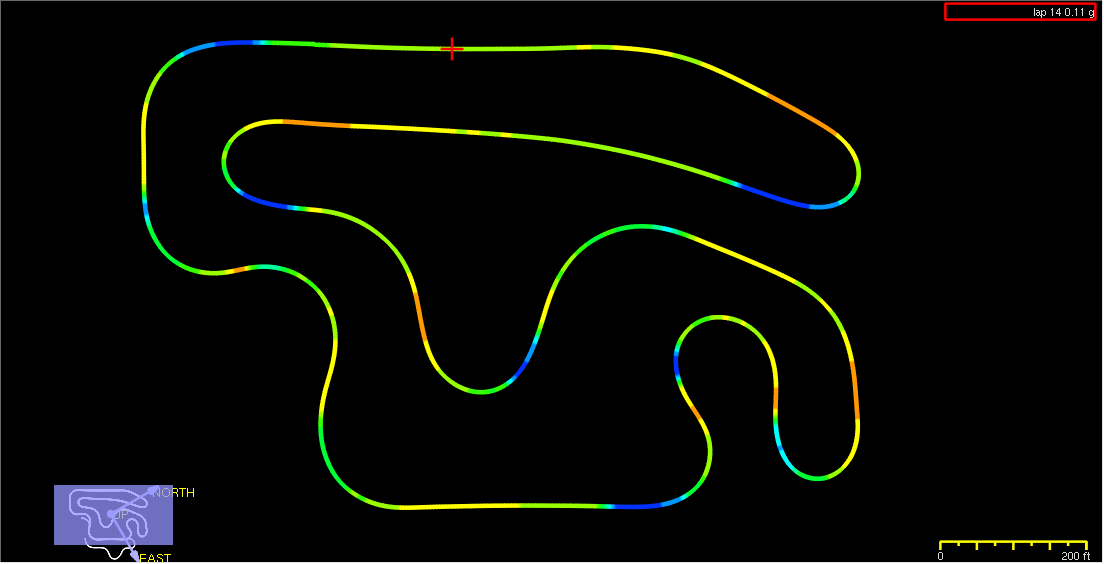 While this map is from the X30 Masters driver I was looking at data for.

My question is, how viable is this to look at a driver’s braking habits during a session? In the top photo, it looks to me like going into turn 1 the senior driver is braking, letting off the brakes for a moment, the braking slightly again just after he turns in. This is compared to my masters driver who looks like is releasing the brake as he turns into turn 1 and makes one smooth braking motion going in. Is there something I am missing or not accounting for here, or would this be a decent idea of what to have the Senior driver work on at our next race?

Having never been to Newcastle, it’s harder for me to say which is better. But, I suspect the senior driver can rotate his kart more easily sooner in the corner, and power out earlier. I’m curious what the time compare trace would show!

Using a heat map is actually something that several data companies are big on and experimenting with to make data more intuitive to interpret. For hardcore compare and contrast, I’m not sure I’d want to use it, but it is useful here when you have two completely different drivers in different karts. The time compare function in AIM is a much more impactful way to see really where a driver is gaining and losing–as for example in turn 1, both methods could work!

That’s the thing–ultimately, there is what we consider right and what we consider ‘wrong’ in driving. Ultimately, the laptime is the decider. As an example, Rob Logan has a habit of trail braking in a shifter kart, which is wild to see on data. It shouldn’t work, but somehow he is able to do it. As long as they are fast, it’s more about looking at symptoms for improvement, rather than whether one method is better than another, especially if they are different drivers at different weights, competitive levels, etc.

Yeah, I wasn’t thinking there’d be a direct comparison between the two, since the weight difference plays a huge difference in the two, and it shows on the data. My thought was more just that in terms of habit for my Senior driver braking early and having to lessen his deceleration momentarily to make his apex, as opposed to the master doing it in one declaration. I don’t want to look at braking points specifically because of the weight differences, but more the habits of a driver under braking.

I’ve really only used the speed vs distance graph to determine braking points, and also the slope of the speed line can tell you if deceleration is constant (meaning hard and equal braking during the entire braking phase) or if brakes were hard and early, and then had to let off a bit before the corner (or the opposite… braking moderately, and then braking harder when realising they did not brake early/hard enough. The speed line will be curved vs straight in these tow cases. Comet I think has some good videos on this, and a bunch on youtube. If you want to get really fine grained data, us the accelerometer data to see when the kart is accelerating/braking, or coasting - goal to reduce coasting time.

You could look at the rpm or rear speed sensor (if you have one) at that point to see if he locked up momentarily at that point.

But just at glance, it looks like your X30 driver is braking in a straight line and turning, whereas your Master is trail braking into the corner. It would be interesting to pull up a lat g trace. I bet the Master driver starts turning in earlier and is driving “under the rubber” whereas the X30 driver is driving a normal slick track line (late turn in).

Senior driver has a couple corners that are pointier on the trace compared to the Masters driver. This leads me to concur with your assessment.

Looking at the RPM sensor, he had locked up momentarily just at the end of his hard deceleration, which could explain the pattern there but I’m seeing this on multiple laps. It’s definitely worse when he locks up at the end of his braking, which is a lot, but looking at the 4 fastest laps only one time did he not lock up the tires towards the end of braking and this driver still made the same braking move.

Surprisingly, they actually turn in at basically the same point, within about 5-10 feet of each other. This could be closer, but I was expecting it to be a lot larger of a difference when I looked at the data after you mentioned it.

5-10 feet is a massive difference. Go look how wide the rubber bedded in line on a corner is, its probably 3 ft, less than the width of a kart because its mostly the outside wheels.

Because GPS is inherently not accurate enough you are really just looking for if it is earlier or not and then how the lat g increases and maintains through the corner. I would suspect the X30 driver would turn in later and have a higher earlier peak, a more wobbly lat g trace. Whereas the Master would have a earlier turn in with a more gradual increase and longer lasting (but smaller in amplitude) peak.

Oh okay. I had no idea how many feet was a lot here, but I was guessing 5 feet was relatively short. I’ll have to check out that video once I get back to my room tonight.