I am getting excessive jacking of the inside tire causing me to come up on two wheels especially on left hand hairpins/turns.

I am currently setup on a harder axle short rear hubs and a tillet seat. Ive been told my hands need to slow down however, feel that karting is also tuning to the driver and the driver is always the easiest things to blame too. Can you guys provide me some inside on where to start addressing this issue? Is it seat stiffness? Do i need a softer seat? Softer axle? Move seat position? etc

Have you tried whitening the tread width? How wide is it now? How high is your seat off the ground? What’s your front and rear weight percentages? Is there room to widen the wheel width?

Agree with Al. After double-checking your front/rear and side/side weight %, these are the things I would do in this order:

The stiff axle is the correct axle. If it’s happening mostly in left-handers, I’m willing to bet your seat needs to be moved to the left. Being at 200lbs and running the 206 which has to hang off the right side of the kart pretty far, I’m guessing you have lots of right-side weight.

At the 206 Grands, I was working for a cadet kid who was about 130lbs, too big to be in the class really. And he had the same issue. Kept bicycling in left-handers. Moved the seat like an inch to the left and it fixed it fully.

We are maxed out at 50” rear width as per the rules on Vega Blue tires. We also run 6.50” rear tires

Thanks TJ for the reply. I’m going to get some scales and try scaling the kart

Are you in Canada? Generally 55” is the max rear track width, but I think some Canadian series specify a narrower rear width.

Can you try wider wheels in the rear? Are your rear wheels at 210mm? It looks like the kart had some help from the kerb and the extra steering input didn’t help.

Yes it Canada our rules state a 50” max width rule

We can’t use 210mm only 180mm wheels allowed. The kerbing did probably help in this situation. But it mainly happens on hairpins when I don’t touch kerbing about 3/4 into the race

I would listen to what TJ said, but ultimately I think you’re too high up in the seat, likely rear axle height too. I run the STVK 450 as well and i’m 6’1" at 195 lbs and sit lower than you do. Granted I did end up changing from the OTK seat to the beasly one. 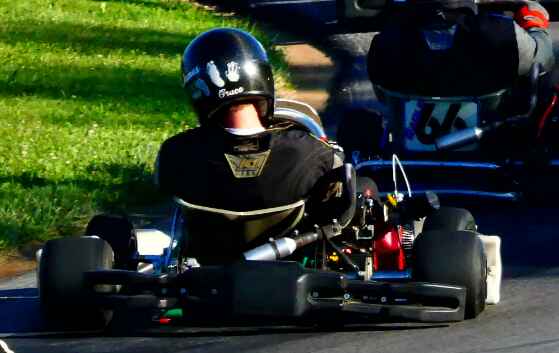 Actually I am driving this specific one.

This uniquely shaped clear high back fiberglass seat allows the seat to lay farther back without running into the axle height rules laying back with shorter back seats. Great for tall drivers looking to get their CG down in the kart! Select Size -...

I was thinking that my t11t was too stiff and was going to switch to the VG. @tjkoyen can you comment on this?

VG will help the chassis flex in the center more, so it might help keep it from bicycling by absorbing some of the tipping force. It should increase the kart’s inside rear wheel lift though as well. Might be worth a shot.

I agree with Matt that your seat position looks too high/upright.

All of these suggestions sound good and have worked for me other that trying a different seat. Still using the T11t myself. After watching the section of video where you start tipping up several times, I noticed your corner entry was quite early and making your apex a little early. This makes you have to hold the wheel longer into the apex where you are already back on the throttle. At this point the kart is gripped up and the extra throttle tips your mass over, taking the inside wheels off the ground. The driver behind you, who’s footage you were using, turns in a little later noted by how you cross the center line of his bumper. It appears he is already unwinding the steering where the kart is under peak load (on throttle, near apex). He caught up to you in the corner before with a similar line. He drove in a little deeper, got underneath you in the corner and drove out further as a result. By straightening the apex some, you can drive further out of the corner before reaching the outside of the track and carry more momentum as well.

I am struggling with T7 at NTK. Its a sharp hairpin left at the end of relatively fast straight. After the track was sealed, I found I was bicycling at the apex out. The track surface is very grippy at the apex. After making the chassis adjustments it got better, but was still lifting both inside wheels a little. I found when I turned in slightly later, got the kart rotated more before I was all the way back into the throttle, I was able to keep the kart more stable through the apex and the sticky part of the corner. When I tried a smoother arc toward the apex, I found I was too loaded up and lifting the inside wheels. This started happening as the tires came up to temp. I started playing with my line and the bicycling got better. Unfortunately I found myself doing it again when trying to defend the inside line later in the race. It ended up costing me the position when I tipped up trying In to save it, much like you did. In hindsight, I would have been better off sticking with my adjusted line and beating him to the inside of next slower corner.

Not sure this will help in your situation, but might be worth playing with it.

Now that I look back I do see that I turned in a little early to the apex. Here’s the same footage onboard with me.

At 2:58 is where that corner happens.

Just watching a few times through, you do try to carry way more apex speed then those around you and then lose out on the exit. You almost bump into the back of the guy in front at about 5:48. Then the next lap (around 6:30) you enter the corner much slower (due to the guy being so close in front) and come out way faster then him in front.

Maybe try taking that one corner a little more gently. It does look like you calm down through there once you get past the guy, so you might have already learnt

Much better at the 7:04 mark when you made a run on the guy into the same corner you were defending earlier where you bicycled. You made it a double apex and straightened out the exit. Great job!

Thanks, yeah I guess taking a more defensive line with the grip levels up caused that small bicycle. Still managed to get it down quick @GregF

What axle do you have in the kart?