Last season my son and I were working on braking at the limit when coming off a high speed section into a slow corner. After a while he started hanging the rear out when braking. It looked cool, and he was having fun, but his lap times went up a few tenths. Lesson learned for both of us. But I’m curious if trail braking is useful in 206? I can see instances if the kart is tight and it’s needed to get the kart into the turn. I just don’t know if he was doing it wrong and hurting corner speed or it’s just a bad idea in general.

I’m guessing it’s of limited use in lo. I could see some corners where a light trail would be beneficial but I’m having trouble imagining a momentum driver doing much if any.

First we have to define trail-braking, as people often confuse the definition. Not saying you’ve got it wrong Kevin, I just find the term gets thrown around a lot in the wrong context.

Trail-braking is a technique where you are braking very late and because of this, you extend the braking zone into the turn-in portion of a corner, sometimes retaining some brake pressure up to apex.

For a kart, what this does is allow to brake later, but it also loads up the front of the kart as you are turning in. This provides more weight-jacking, usually lifting the inside rear harder and more quickly.

Of course, braking later sounds great, but there are a few key risks involved with improperly trail-braking.

Overall, it has merits even in lower horsepower classes on occasion. However, for most classes where momentum is king, keeping the kart smooth and using straight-line braking will be the better option for most corners. Some corners or sections you may find a little trail-braking is beneficial and faster. The key is the driver must be super attentive to the grip level they are feeling from the tires so that they never go over the limit on turn-in and start sliding or understeering. A top-tier “complete” driver would mix straight-line and trail-braking as the corner requires. In a higher horsepower class or a class with stickier tires, it’s a more viable technique, as you have a higher threshold on how deep you can drive the corner before you overpower the tires, and you have the additional horsepower to dig out of the corner at apex.

What I find works best usually is a bit of deep trail-braking in tighter corners or hairpins where you really need to load the kart up, and straight-line braking in faster corners where you’re more flicking the kart through the corner.

I was always under the impression trail braking referred to an overlap of still on gas while starting to brake. In an attempt to help keep the motor reved up while slowing down for a corner. 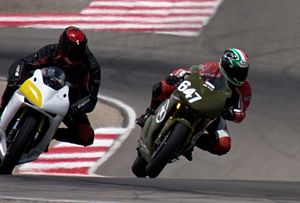 Trail braking is a driving and motorcycle riding technique where the brakes are used beyond the entrance to a turn, and then gradually released up to, or before, the apex of the turn. In applying this technique, motorcycle riders approach turns applying front brakes to reduce speed. As they enter the turn, they slowly ease off the brakes, gradually decreasing or trailing off the brakes as motorcycle lean increases. This is done for several reasons. First, it gives more traction because the d...

So it’s basically just a form of “late braking?”

It’s the latest braking, because you’re slowing the kart down almost all the way to apex. Whereas straight-line braking, which is the other common technique, is obviously completing all your deceleration in a straight line, and THEN initiating turn-in.

The nuances of trail-braking are important because of how they change the vehicle’s dynamics on turn-in.

Yes. Extending the brake pressure past turn in and onto apex… well maybe not all the way but you get the drift.

Thanks for the responses guys. I’m not sure if what he was doing was trail braking or threshold braking. But the rear was out of line about a foot when coming into the corner. I suspect that the issue was what TJ said, making the rear wheels combine braking and cornering loads at the same time. Which compromised both.

Well if that’s what trail breaking is then that’s what I love. Do most of my passing right before the apex. Pitch it in like a boss. Lol

In Terrence’s book (my main reference to knowledge, not trying to imply I am an ecpert) I think he describes that as power braking and a useful technique under certain circumstances. It sounds extremely tough on equipment and not very mechanically sympathetic though.

You are correct. Power Braking is when you mix the brake in with the gas. It is hard on both the engine and the brakes. In my experience, I have used power braking when in a flat out corner and the rear is a little loose. I just start to dab on the brake to keep the kart planted though the corner while keeping the revs up. I do it on starts too because my dad hates it when I touch the needles.
Trail Braking is very common among the drivers at the front. If you watch videos of Ryan Norberg,our very own @tjkoyen , Christian Brooks and many more.
Listen to everything @tjkoyen says. He is on the money.(as he is most of the time)

David does both power Braking in turns 4 and 5, Trail Braking in the hairpins. He also carries the brake very late into the corner, but the kart still handles great anyway. FYI the driver is doing Indy lights this year,
1 Like
DavinRS (Davin Roberts Sturdivant) February 16, 2019, 2:54am #13

I was always under the impression trail braking referred to an overlap of still on gas while starting to brake. In an attempt to help keep the motor reved up while slowing down for a corner.

That also makes weight management a pain in the butt, because you’re sending weight forward while being on the brakes, while also trying to send weight backwards because you’re on the throttle.

More often than not, it just leads to an unstable kart, where as straight line braking, and picking up the throttle smoothly would have accomplished more easily what you were aiming for with a good exit, while asking the kart to do less.

That also makes weight management a pain in the butt, because you’re sending weight forward while being on the brakes, while also trying to send weight backwards because you’re on the throttle.

That doesn’t make sense on a single brake kart. Seems the net result would be X. If you have a net of X amount torque, thrust or acceleration (whatever you call it) how does the kart know if it is X or Gas - Brake = X. Still ends up as X. So how does that work?
On a 3 brake kart it makes more sense, more so if your brake balance was front heavy. That is just how I view it intuitively.

Trail braking in a 206 more than ~1-2 times a lap will really, really hurt the motor.

The biggest thing to instill with a 206 kart is to carry mid corner speed, many call that “rolling speed”

Trail braking in a 206 more than ~1-2 times a lap will really, really hurt the motor.

Why do you say this? I can’t think of why.

I’m not talking about brake balance.
I’m talking about weight management of the kart. The overall balance in what you’re asking the tires to do.

Braking, in all conditions moves the weight of the kart forward, loading the front tires more than the rear.

Accelerating does the opposite by loading the rear tires.

So by giving gas and brake, you’re asking opposite sides if the kart to do work at the same time. Which, in turn, is asking your tires to do that same work.

A tire can only handle so much force at one time, and they perfer to be loaded in one direction, so loading and unloading at the same time doesn’t really help you.

Take a look at a friction circle, and that might help.

I say this because you can hear it in the motor, and see it in the cylinder head temperature. The engine is not designed to tolerate sustained load like would be generated from sustained trail braking. At least in our region, it’s a pretty consistent correlation between heaving braking and premature engine failure or power loss.

The other thing worth noting is I’ve instructed both kids and adults in 206 to stop trail braking so much around a lap, and you can see average CHT Drop nearly 15 degrees and lap times often improve noticeably.

The torque of the 206 when trail braking also pins the rear of the kart down as prevents the inside rear wheel from hiking, but this is generally true of most trail braking habits anyway.

The engine is not designed to tolerate sustained load like would be generated from sustained trail braking.

What cylinder head temps are we talking here? What’s the source of the power loss you’re seeing.

I know you’ve worked on quite a few 206’s, but I’m surprised at this. I’m pretty sure during development the 206 was tested for sustained high load for a period of hours.

Maybe at higher ambient temps it becomes more of an issue?

I know heads can warp if they get too hot and over time the valve seats get off square. But I’m having a hard time linking that to being on the power for longer than usual during a lap

One scenario I could see is if you’re giving the big end of the crank a hammering by laboring the engine excessively at low RPM… but that shouldn’t happen unless your clutch has an incredibly low stall point.

@KartingIsLife the temperatures I see are in the MyChron Cylinder head temperatures. And you can also see it in the data as the kart comes off of medium and low speed corners. Once the engine gets above 395-400 cht it starts being pretty unhappy, and you can see performance drop off. You can hear it too, the engine sounds sluggish.

The engine is tested and loaded on the dyno to sustained loads similar to lugging a kart around with a driver, say 2-300 lbs. when you start trail braking suddenly you’re heating the engine over and over and it’s above that performance window, and then people are surprised when the engine falls off…