I’ve been reading and thinking a lot about turning and braking and I am stuck on misunderstanding a basic concept.

The basic idea of straight line braking doesn’t fully make sense to me and maybe someone can explain.

Imaging a wide 180 turn at the end of a straight. You approach the turn, stand on the brakes, initiate turn in… then what is supposed to happen?

This is the bit that has me confused. Are you supposed to “coast” to the apex? (Totally off throttle and brake).

Or, are you supposed to have a bit of maintenance throttle? Trail?

It seems like a huge ask to be able to nail the deceleration perfectly such that you are carrying the exact right amount of speed to get you from the end of your brake zone to your apex/accel point with optimal grip.

So in practice, I kind of find myself trail braking a lot, which appears more intuitive. Yet I am definitely not great at this because I’m pretty sure I lose a lot of times in corners.

For my next practice session I am planning on working on threshold braking. What’s stuck in my mind is the image of me nailing a really great brake zone but then being really confused what to do once I turn in.

Coasting should almost always be minimal. If you are straight-line braking, you should be turning in and applying throttle as soon as you come off the brakes in most cases. The idea is that you’re constantly keeping the kart loaded so that the chassis remains sprung and keeps the inside rear wheel off the ground.

Every corner requires something a little different, but I trailbrake quite a bit too. Terminology can get mixed up here, but when I refer to trailbraking, I’m referring to braking slightly passed turn-in, or even up to apex depending on the corner. It’s give and take. If you brake later, you’ll have to get on the throttle later, so you’ll gain on entry but lose on exit. If you brake earlier, you can get on the throttle sooner and gain on exit while giving up a little time on entrance. So depending on the next string of corners, you could end up with a few different ways of tackling each section.

It also will depend on engine package, grip levels, tires, etc… You can’t necessarily drive a corner the same from engine to engine or even from morning to afternoon, as the grip levels will be changing on race day.

The best drivers are feeling each corner change as the session goes on, and adapting their driving accordingly. And many of them performing that “huge ask” you touched on in your post; nailing the deceleration and carrying the exact speed needed to be on the limit of traction. That’s all driving fast is; being on the traction limit, whether it’s braking, turning, or accelerating.

Here’s a video of me sort of killing it a couple years ago, where you can see my feet and my inputs. Should help give an idea of what I’m doing in each corner.

Ok that makes more sense. From what I have read somehow I got the impression that you shouldn’t be on the gas while turning because it would lower the inside back wheel and make you turn poorly. I was trying to visualize how coasting from turn in to apex could be faster and just drawing a big mental blank. Glad to see I am not nuts.

So for threshold braking in a line, the key is to slow down just enough that your turn in doesn’t result in a slide and allows you to immediately roll over to throttle?

It seems obvious in theory; slow down too much and you aren’t using all the grip available, don’t slow down enough and you’re exceeding your traction and sliding one end of the kart. But when you factor in turn-in points, throttle application, and different corners it becomes something pretty intricate to master.

And then throw in the elements specific to karting, like how karts flex and lift the inside rear wheel, and that’s yet another variable to figure out.

@Bimodal_Rocket one other thing to remember about threshold braking is that you can brake harder, without locking up, when the kart has more forward inertia, and the rear axle has more rotating inertia. Essentially, the faster the kart is going, the harder you can brake without locking up. You can see this in TJ’s video. In the brake zones at the end of the long straights, you see his left foot come into shot really quickly, and then he modulates the brake pressure back just a little before he lifts his foot off the brake completely. For corners like the right hand horseshoe or cell tower, his left foot comes into shot a little more smoothly, as he isn’t coming into those corners with nearly as much speed.

Very rarely though are both feet out of shot. Before his left foot totally leaves the shot, you see his right toes creeping back onto throttle.

Yep. It’s like there’s a bar connecting the toes of the two feet. Movement in one results in the other being pushed in an opposite direction.

I like to think of it as engineering terms (which isn’t entirely surprising). I think of a tires grip in the terms of a force vector diagram. A traction circle is the most apparent for racing and can easily show the limits of a tire (which is really what we are talking about here. 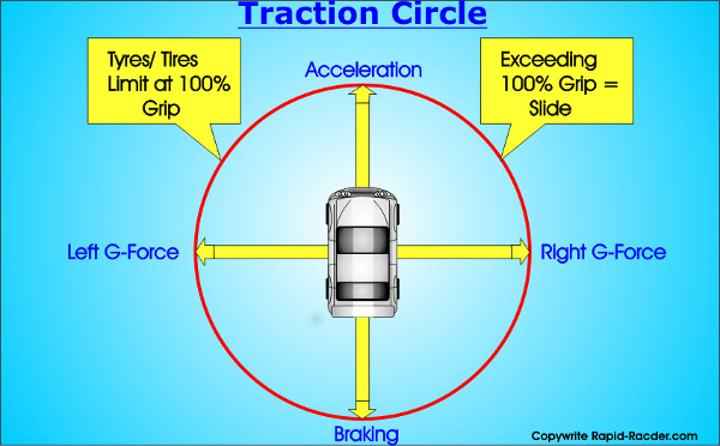 If you imagine the circle above which is divided between the cornering G-Forces of the tire (left to right) and the braking and accelerating forces (bottom to top). You can see that a kart can only perform 100% of each required force. Under most conditions it could be a combination of two at a time. For example if you were to brake while turning into a left hand corner, you might be using 80% braking force and have 20% left lateral force to turn the car.

This helps to understand that if you are using 100% of the grip available to you for braking, then you have no grip left to do any turning. What TJ’s video showed was a gentle transition from 100% braking to 100% turning. So coasting can in theory be a part of a corner, it is just effectively an extended period at 100% turning grip. Usually medium speed entry long “lightbulb” style corners have a lot more coasting then most.

The super interesting part (to me at least) is most karting doesn’t use front brakes, so your front tire are free to turn or you can use your front tires to brake by turning. This also means that unlike other disciplines (without aero) your maximum ability to brake is when you first press the brake pedal (most weight is over the rear axle), as soon as you start decelerating the weight moves to the front and you lose some braking ability.

Anyway as others have said, you should be braking until you are at you maximum turning, bleeding off the brakes as you increase the steering lock. Your maximum turning may be longer or shorter dictating whether you coast or not.

“So coasting can in theory be a part of a corner, it is just effectively an extended period of 100% turning grip.”

This is the crux of what I am confused by/ trying to visualize in context of a major braking corner (the big 180 at englishtown for example).

Going back to what I referred to as a “big ask”…
The thing that seems impossible to do consistently would be to find the exact right amount of threshold braking to apply before turn in so that you could then effectively use 100% grip and coast to the apex. Not enough decel before turn, presumably you’d understeer, too much brake and you are leaving time on the table.

So there is a magic moment of weightlessness, if you will, between brake and throttle, where you engage in the turn at the limit of the traction, neither on brake or gas. But finding that razors edge seems hugely inconsistent. I would imagine that you can get really close, however, and that good drivers are really dancing around the edge of grip all the way from turn in to apex. (The roll onto throttle TJ describes.)

So for my next practice session, how does this sound… break it into two pieces.

Part one: learn how to stand on the brakes quick and hard without ending up backwards. Don’t worry about overslowing for the turn, just learn to stop in the shortest possible distance. This, to me, is going to be the hard part. Commiting to briefly locking the wheels at 60+ mph is scary as hell.

Part two: once you can do that, worry about turning in. Figure out at what point in that deceleration you can turn in, again without losing traction (I’m guessing too fast would manifest itself as understeer as opposed to a spin).

Part three and onwards, which I’m guessing is figuring out rolling into the gas as you come off the brake (again, without spinning) might be more than you could expect in one day.

I have been following your thread since I joined; simultaneously I have been doing everything in my power to conquer a couple of corner types to eek that extra .5 to get tp the podium. I will assist in this process as I am a rookie to motorsports but am taking it as serious as can be for my means. My next session for seat time is on the 30th and as I play with the limits of edge grip, threshold braking and maintenance throttle at apex i will take notes and share them.

In the end it may be a comfort thing but two sets of eyes, minds, and karts is better than Han Solo

Theres a video of Jackie Stewart somewhere explaining i think 8 parts to a corner. That’s worth a watch. I’ve always thought of it as 5 parts for a kart.

Now bear in mind, I didn’t watch this first, I’m assuming this is the one I’m thinking of.