Good to see so much drivers contributing.

Wanted to get something started on tyre wear, especially for kz or other gearbox classes.

Need a little help here. I seem to be coning the rear tyres, especially the outer rear tyre. I run a crg road rebel on vega whites. Rear width at 139.50cm, cold rear tyre pressure at 0.53 now in summer as its hot. The problemis the inner rear tyre wears more on the inside, which I know is normal but I tend to get the outer rear tyre to have kind of hops on the inner part of the tyre. I don’t feel myself hoping through corners, its more a feeling of a kick in the rear when I hit the gas on exit, as if the tyre cant hold it and slips away when I want to hit the gas.

I am a tall guy, 1.86cm so I understand i am giving the rear quite some load just on weight and height…I bave tried to loosen the rear seat struts, especially the left side as it on the long right handers i lose the rear left and make these jumps on the inner part of the tyre…it was actually worse…tightened back up and tried to lower rear typre pres and also worse and tyres looked worse, doing the opposite works better for me…so as I understand doing that I am stiffening the rear…so more grip??? But the left rear looks like i have a hopping problem…so too much grip, right???

Am a little lost on this one. Am new to shifter karts, only 1 month back in the game after 13 years without driving karts, used to drive 100cc ica back in the day at a pretty high level.

Thanks to any input guys!!!

Hey @Patrick_Kramer, welcome to the Forums. There’s a few ICA\FA\FA heads around here. myself (I’m a bandit though), @NikG, and @Alan_Dove come to mind…

Before we go into chassis specifics… how about a few pics of your tires\tyres?

Sure will get some over!

Can you let us know what the setup is now.

0.53 bar is about 7.68 lbs which is pretty low for any kart let alone a heavy shifter kart.
I am running a GP11 chassis which is also 32mm and have suffered with finding a good front rear balance that I could drive fast consistently. The Vega Whites have been the easiest tire to drive on so far after using Bridgestone “B’s” and MG Yellows. What I have come up with is a tire differential between the front and rear tires. I have been using 9 lbs front and 15 rear which has given slight understeer and predictable rear slide/grip characteristics. I run the low front to take away the edginess of the front end and the higher rear pressures to give better support with the soft Vega sidewall. We have been racing in 25 to 30 degree weather this summer so maybe similar to your experiences. When I tried this I expected the rear tires to die from the higher pressure but wear has been good and they have not overheated. Anyway, just my experiences and something maybe to try as sometimes we are uncomfortable to try a setup outside conventional thinking.
John K

Thanks for the above. Was pretty tied up these days so couldn’t get down to driving.

So caster is pretty much at 0 so balanced forward/rear.

Went to the track today and did some laps, tested with tyre presurres all 4 set at 0.54 bar and they locked pretty ok. Its pretty warm over here. I also closed rear track to 1.39m to see what happened.

So definately more grip in the rear which is nice for a change, no real slide or hop on hitting the gas when convenient. A little understeer at both entry and exit of corners though. Front is set at 2 rings as per width.

I think i will go a little wider rear next time, not much but maybe open a little to 1.395m.

Here are some pics from my rear left tyre, its the outer tyre. 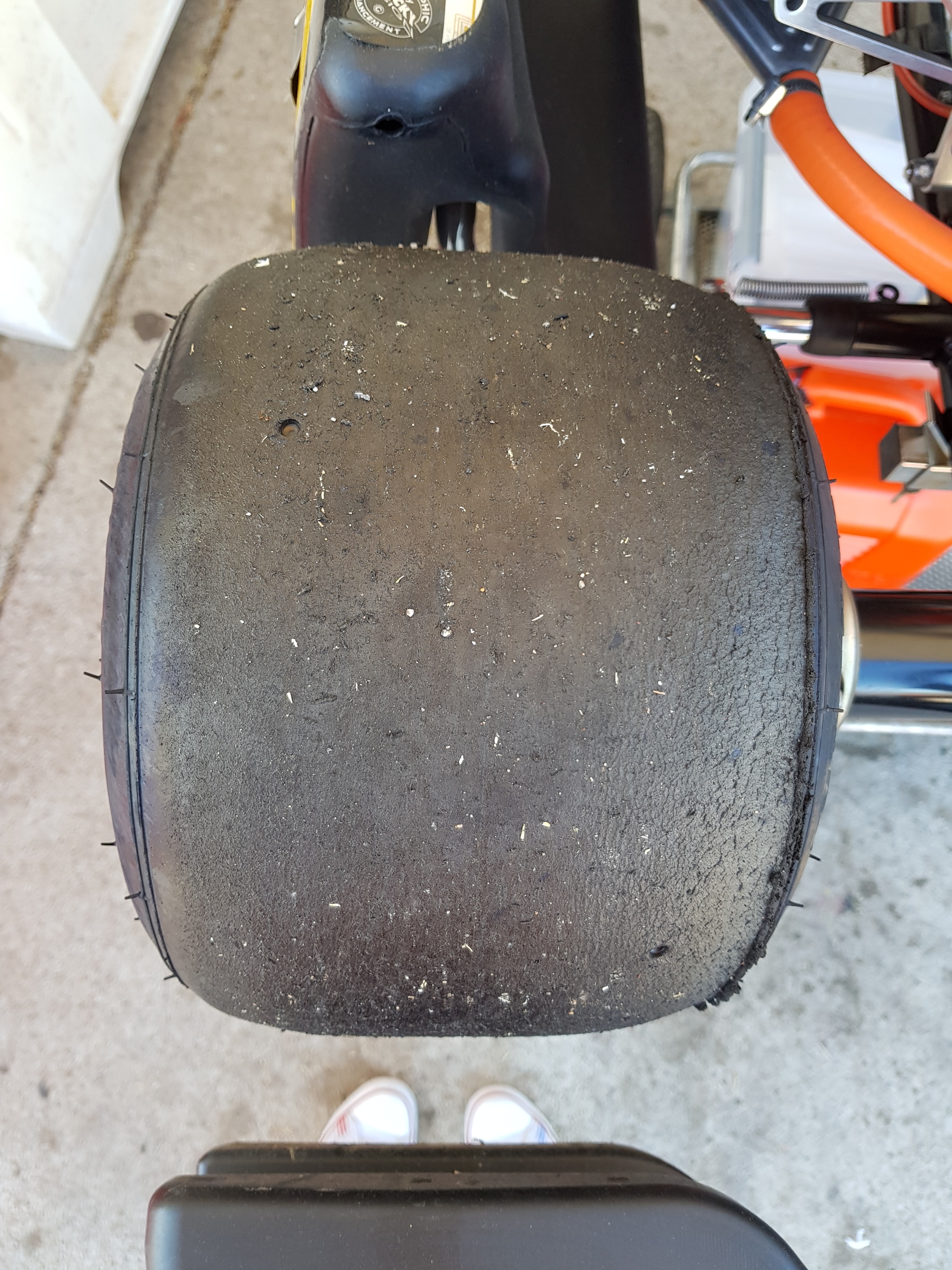 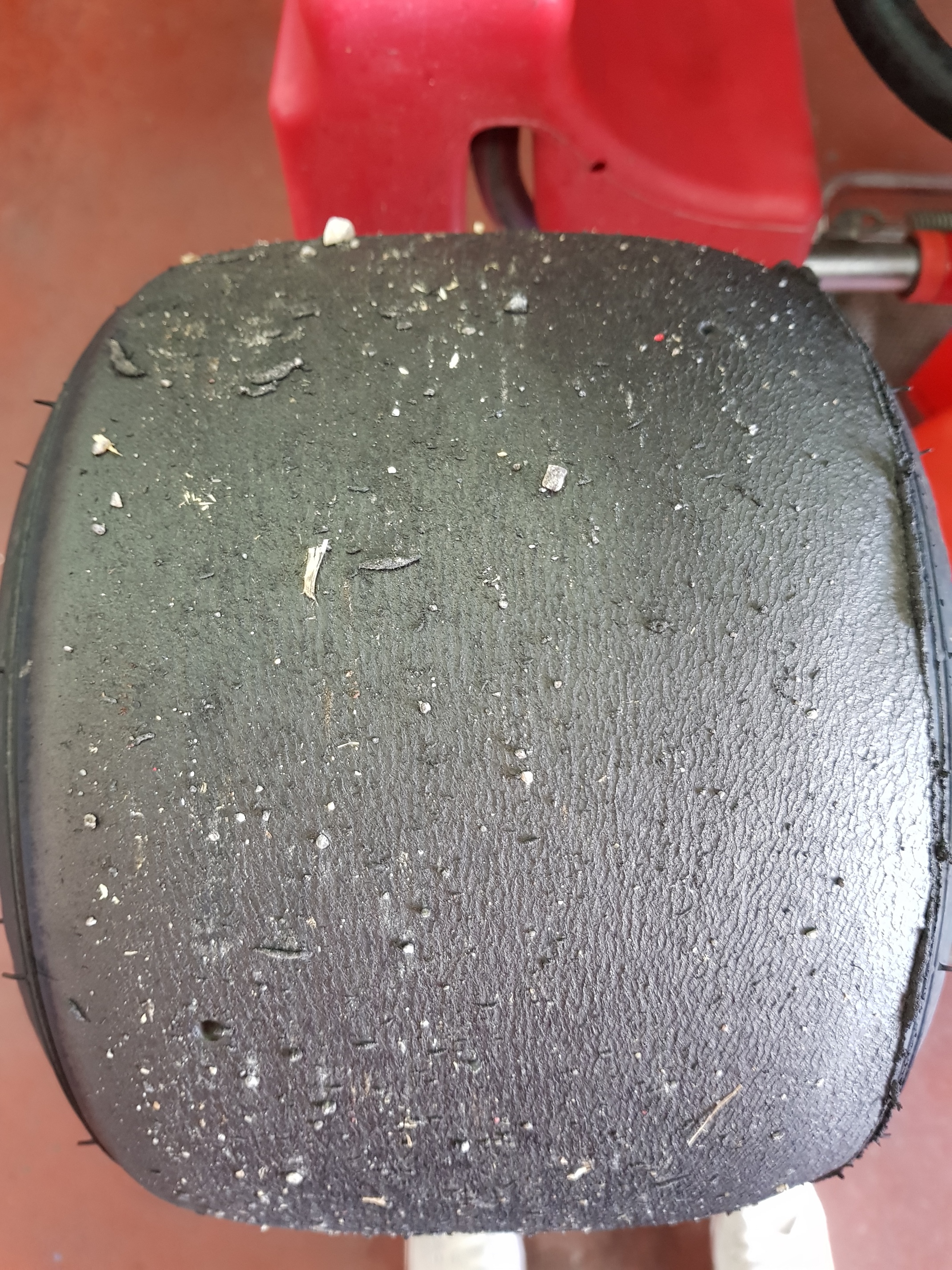 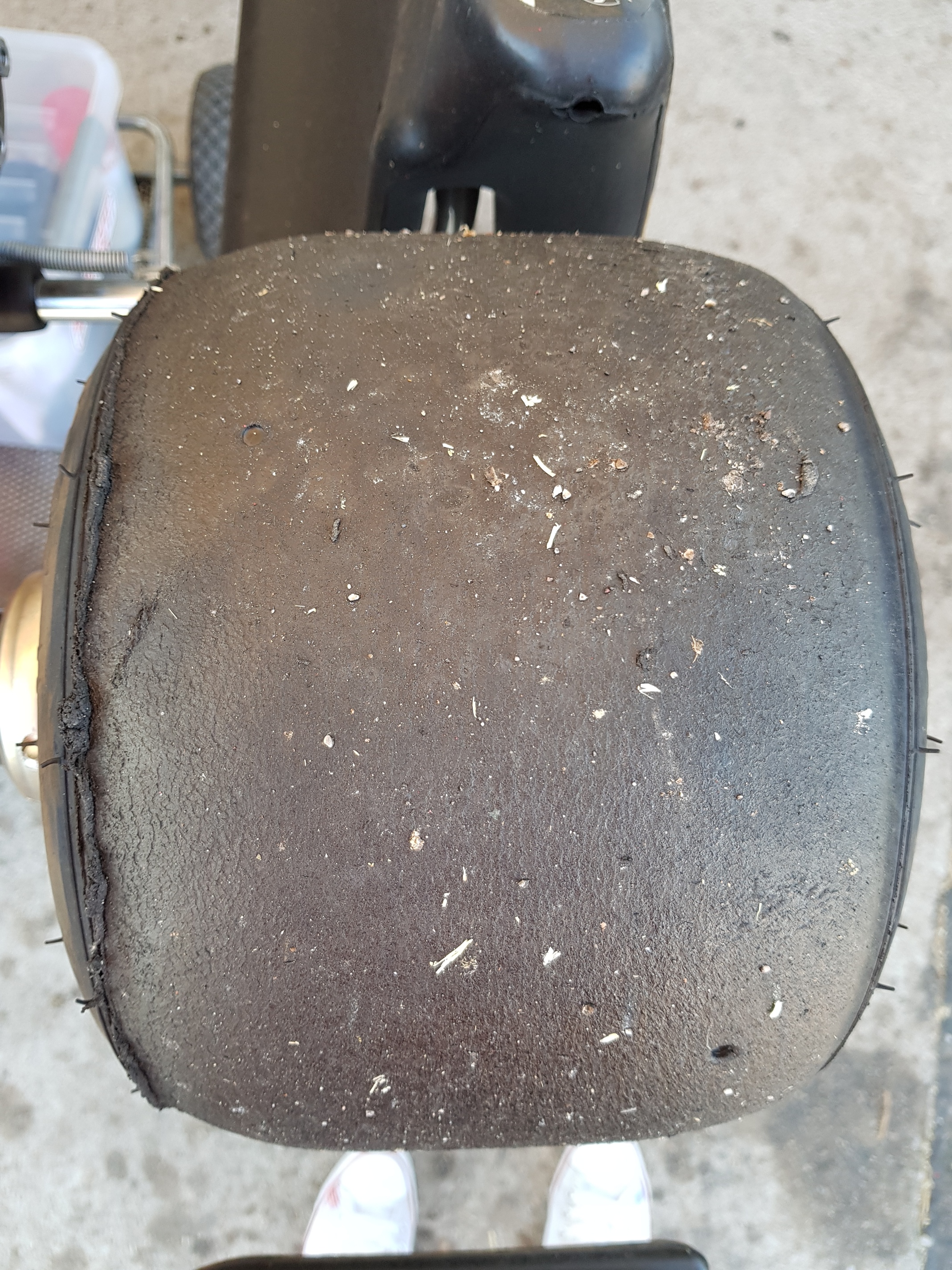 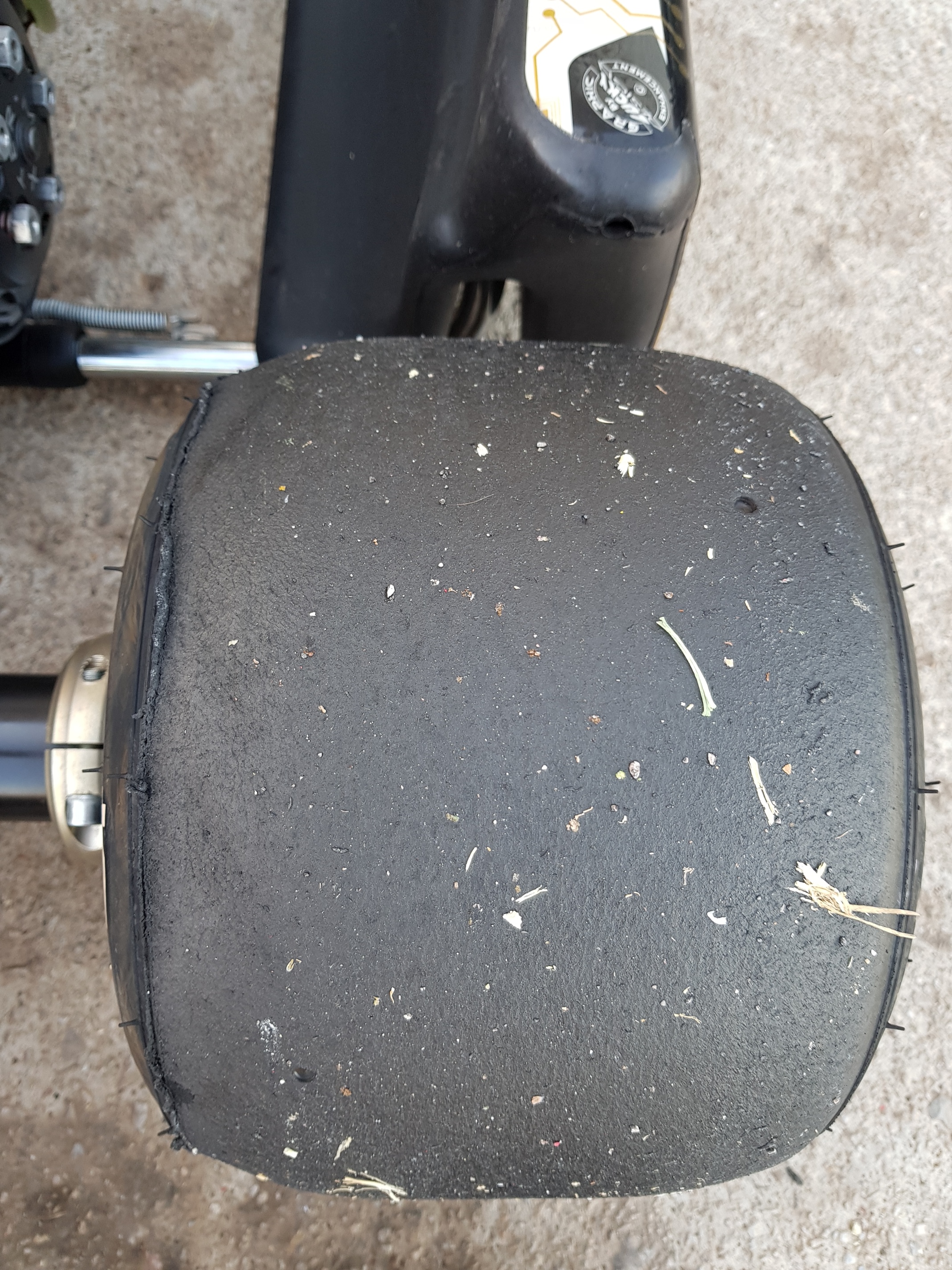 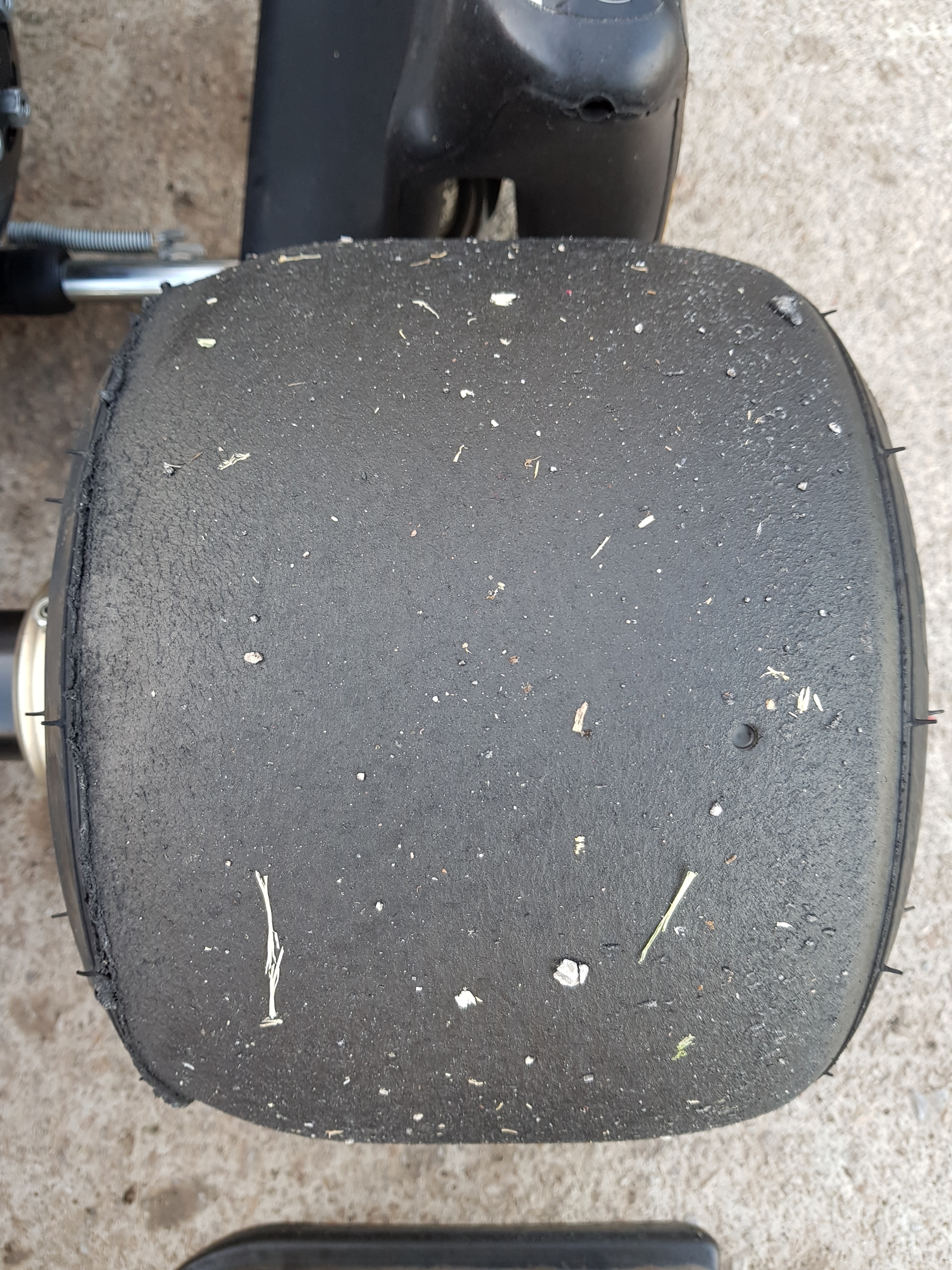 The second pic is from another driver but its to show how the tyre on my rear left looked before today, so you can see the wear on the inside.

I flipped the rears late today to try not to eat that inner rear so much on the outer rear.

I know they are pretty much dead, will see if i get another set of whites or swap to greens for these hot days just to let them last a little longer. Just worried that on a new set of whites i might end up with that inner edge wear and bites.

It might just be me but I am seeing diagonal scratches near the hub edge of the tire. Which is weird because normally if I have a slide I get those scratches more in the middle of the tire as opposed to the edge.

Yeah its those sort of scratches on the inner edge which seem so weird…any input would be much appreciated.

My kind of theory is that for some reason the rear has too much weight on it and under acceleration it just squats and flexs too much so all the load is on the inner edges. The more I trim down the rear width the better it gets. Currently on 138 cm and will move it to 138.5 cm next day as have some understeer at corner exit. Will also remove camber and set it to 0 as have it at neg 1 on trolley, so once in the kart guessing its roughly at 3 or 4 neg, hopefully that should help the rear too.

Will let you know how it goes!

Hey this is the best pic I could find, but hopefully it explains the inside tyre wear.
The inside wear is purely a function of the tire flex under lateral load.
If you look at my rear left tyre under load in this corner the inner tread profile is parallel with the track surface. but stationary (on stand) the tyre is very cambered.
so in essence the inside diameter of the tire grows as the side wall stands up on the inside. and the wear is the tire balancing it diameter so it is equal under lateral load.

So don’t stress about it as it is tyre/pressure specific, though the more you slide the rear the worse it will look.
Also don’t flip the rear tyres as you will lose the width of the rear contact patch. 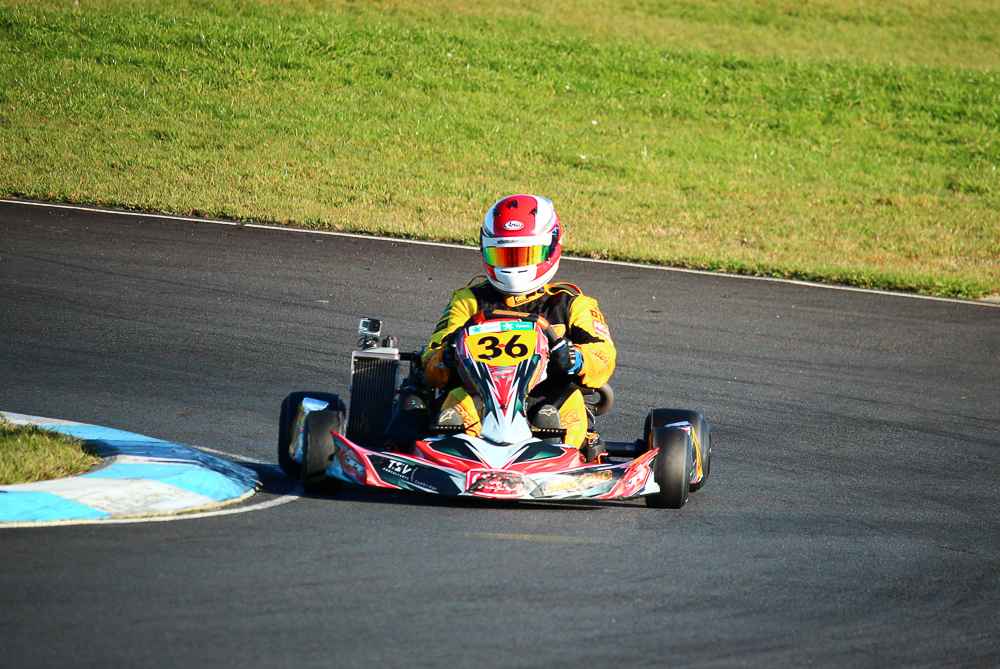 Assuming you have the sniper caster/camber kits on the kart, I’m guessing 0 means they are central front to back.

Generally speak you want to run 1 dot negative camber (using snipe lasers), 2 bars on the front (which you have), 1395mm on the rear and I would suggest no less then 9psi (0.62bar). I’m not sure about the new road rebels but the older ones you almost always ran with the bars out, I think I’ve seen the new models running with nylon front bar. With the weight of a shifter (and even in the masters categories) you get the tire wall folding with the weight and low pressure. Not like the late nineties/earliy noughties when we ran down to 6psi in 100cc karts. The hopping type feeling you are getting could be the sidewall flexing.

It could also be (given your history) that you are trying to drive the kart like an ICA, carrying high corner speed and opening up the corner as much as possible. You could consider changing the style by diving shallow into the corner, bring the kart more to a stop and accelerating straight out of the corner. With this you can make more use of the front brakes (braking in a straight line) and more use of the power (accelerating in the straight line).

Cheers Marian! Yeah understand the reason as in why the inside part of the tyre on load wears more, its just the look on the tyre with the bites which looks unheathly to me, an even look would without those hobbles on the inner part be better

Thanks @NikG. And looks like you may have a point…its 2 months now on the kz after myself being long time being on pause driving karts. I used to drive ica early 2000s, italian masters, euros, etc at a decent level with marechal, getting the hang of things again quickly though. Driving style could be a point, I try to really focus on not sliding the rear as yes the more it moves the worse the tyres look, I do admit I try to handle corners like always, nice and round, as early as pos on the gas and highest speed i can take through it…will try what you say next time out. So brake in straight line as always and go deep into the inside you mean? And then full gas up gears once im straight on exit so basically not making corners round but being more linear?

As per pressures 0.62 bar in the rears on vega whites? Its really hot here, about 35 celcius in spain…would I not overheat the tyres? Currently on cold at 0.53 and once i get in they are at about 0.8 or 0.85 depending on which rear tyre. I d4ive without front or rear bars and yes have the sniper kit on fronts.

If you can imagine looking at a speed trace in racestudio (or your software of choice), an ICA line has a rounded low half (like a U shape) whereas a KZ tends to have more like a V shape to it.

Tire pressures can be difficult because they are not linear. At a point with lowering the tires you introduce more flex to the sidewall which causes increased heat creation in the tire. So you want to find a balance whereby you are not too high that the tire just overheats in the normal way. But not too low that the tires sidewall flexes too much and you overheat that way. The flex is the sidewall problem is increased when the weight of the kart is increased.

I run KZ (GP14 Chassis) over here in New Zealand with an average temperature of probably 18 degrees on a sunny day. I am by no means a top driver but from what I’ve been told by top drivers is 12.5 - 13 pounds hot on your standard shorter 8 to 10 lap races.

I also tried starting at 6 psi a few months ago and those bites/chunks/dips out of the side of the tire were happening to me too, almost certainly i’m told due to running not enough pressure and having the load deform the tire.

I’ve never heard of anyone running as low as 6 psi on any tire. The lowest we ever go on our softer tires (CIK Medium) would be 8 on a hot day.

I’ve been down to 4psi in CIK super sticky rubber and light karts back in the day. But my teammate at the time (Alexander Sims) kept ripping the sidewall of the tire with the bead retainers. 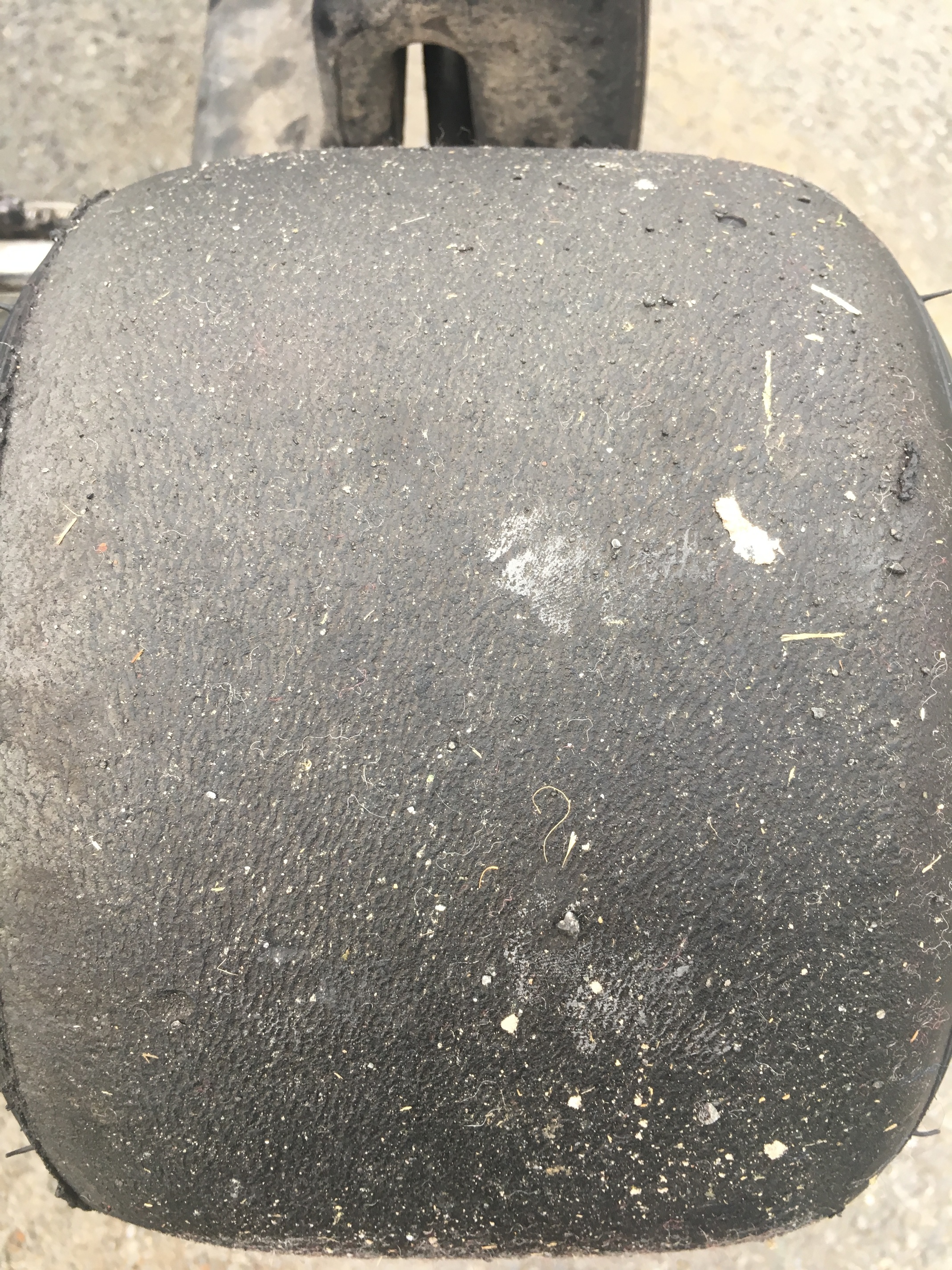 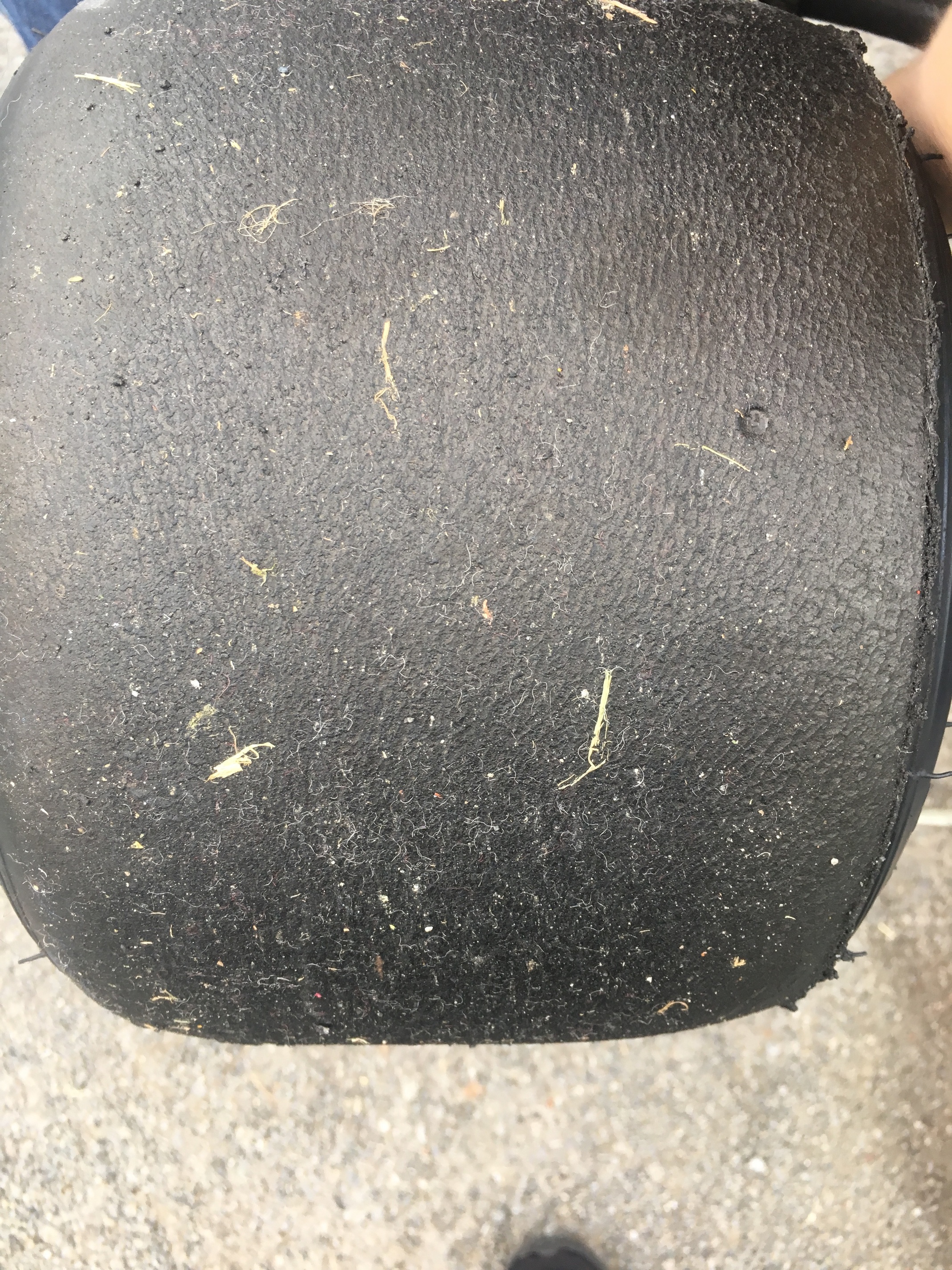 Sliding. Need’s more rear grip. Those wear dots are pretty low too, so it looks like the tire is just past it’s useful point and can’t offer any more grip. I bet with new rubber the graining would disappear.