This topic is all over the place. Data Points:

So, my questions. Ignoring the variety of intervals from above, can anyone explain WHY we would replace the diaphragms and gaskets? In other words, other than obviously torn or damaged parts, the only thing I’ve seen anywhere is a reference to “sagging” parts. What does this mean? How is it measured? How does it impact performance? And, as to the needle and seat, is the only measure of their functionality a pop-off range outside of 8-12 psi? And does this mean that the needle is sticking or leaking around the seat? Or something else that is above my pay grade?

Aside from what you mentioned, I would think that the diaphragms can harden and get stiffer from sitting in the fuel.

Steven - I believe what you’ll find is the maintenance intervals need to align with what you’re doing with the kart more than align with how it’s performing.

If you’re showing up to win races, running at the front or right there within reach of the front group every race weekend then you put a carb kit and spark plug in the kart every single race and probably replace reeds at the 6-8 hour mark which would also align with when you’d be doing a top end rebuild to keep everything as fresh and top performing as possible. In most competitive fields the pace is soo similar that you simply can’t take the chance that anything isn’t quite 100%. You’d love to think these guys have the data to prove what’s falling off and when, but honestly I doubt they even bother because it’s just easier to throw fresh parts at it every weekend.

I’d venture to say there’s another camp other camp runs things things until something breaks, trouble shoots the issue, replaces the parts and carries on while maybe using that as an excuse to do more maintenance at that point… They are out there to have fun, turn laps, minimize costs, but still go fast and have fun.

I’ve personally run carb kits / reeds / plug well into the 8-10 hour range in pre-season testing without any ill effect on performance in my mind.

I showed up for a race last weekend not really knowing where I was going to shake out compared to the competition. I qualified on pole on a carb kit and plug that had around 5 hours on them, but when I realized I had competitive pace it wasn’t worth the risk of having a failure of any sort in the races so I swapped out those parts as preventative maintenance. Did I go any faster…nope…but I had peace of mind that I wouldn’t have to worry about those components the rest of the day.

Andy – Thanks for the thoughtful response. I’m pretty much a “tweener” insofar as you’ve laid out the 2 camps. I’ve always been of the opinion that “national” teams did as you suggest – rebuild and/or replace very frequently. While I don’t go that far, I try to stay ahead of any breakage/failures or any noticeable degradation in performance with my maintenance schedule – everything from tire pressures hot off the track (right at pit in, as soon as I can clear a path for other karts) to shipping my engine to Darcy Decoste in CA for rebuilds.
As I look at my original post, it was half a challenge (does anyone really KNOW when and why they rebuild carbs) and half a fishing expedition to sort out a good interval of my own.
I’m beginning to see how I might build my own carb maintenance schedule – and, something I’ve always ignored because I’d never had an issue in my Rotax days, I’m going to add reed valves to the list. Again, thanks.

VLR is picking up at my club, and I’ve joined them as well.

The main thing with the carb is to use your pop-off gauge at the end of the day to pump the fuel out of the carb so it’s not sitting in there between track days.

I haven’t used it long enough yet to get a feeling for maintenance interval, but I’ve done 20 litres (5 gals) over 5 different days. I did do a full carb tear down and inspection between day 4 and 5, and everything is looking great.

I’m new to karting… This is my diaphragm on my hw-27a carb (x30) after 4 hours … I didnt do the pop of thing after each race day, because I didnt knew. 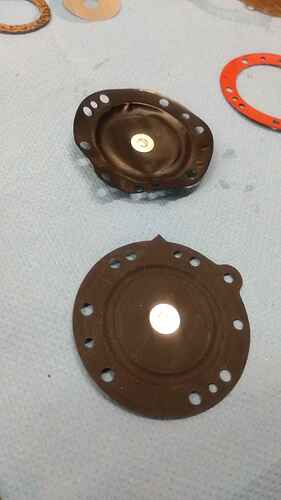 I can’t say for certain, but fuel with some ethanol content may be the cause for that happening. Our club sources our fuel from a station that has no ethanol. It is the co-op here, but they get it from Shell which has no ethanol so far.

If you pump it out with the pop off tester, it should help prevent that issue occurring, but I’d also try sourcing non ethanol fuel if you can.