When my race career is over and my body can’t take it anymore I’ll putt around the track selling soft drinks to the folks in the pits:

Street race, standing start on the track against the curb.

I wasn’t gonna get in front of him and let him draft me and pass me on the last lap. I was up a little on HP, but he could stay right on my bumper all weekend and pass at will with the tow.

RE: the difference in pace, a little HP because alky vs gas, but mostly was gearing and draft, imo. He was .35 higher than me on ratio.

Ah I see. I feel like you had so much greater speed on the longer bits, that you could have created a gap that he wouldn’t get draft from. There were a couple times where you gave him really solid thwacks to get him back up to speed and a few times where you pushed him a very long ways.

I think when he went off a bit early on, that sort of set the tone. I feel like you could have taken him there and just kept going. 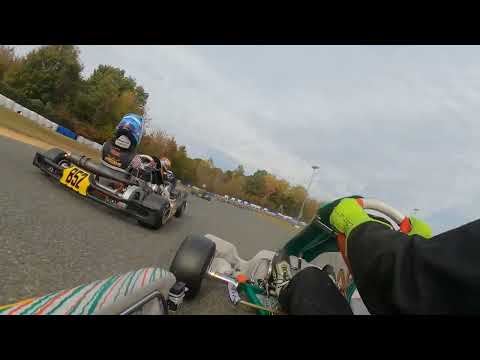 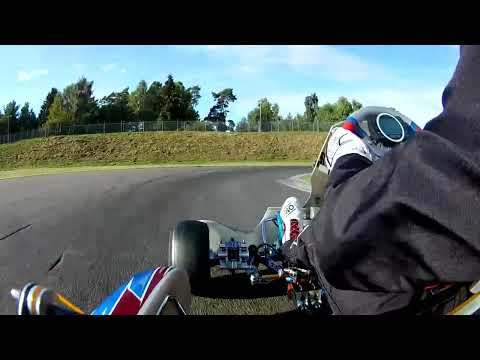 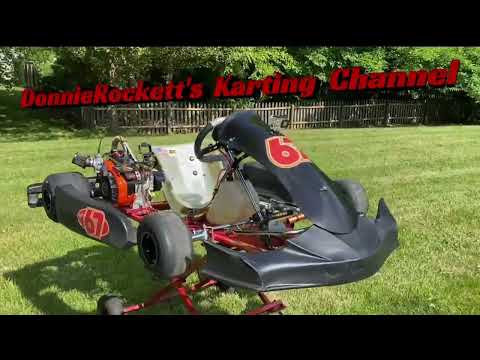 New configuration, and some tight racing at Motorsports Country Club of Cincinnati. 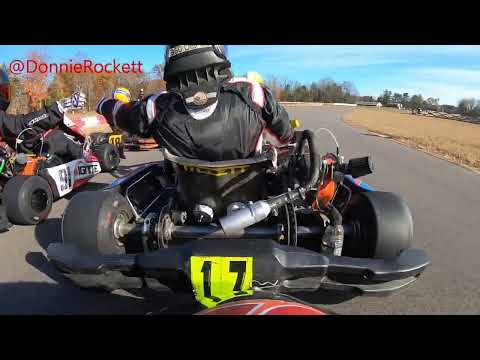 Your kart looks like it does just fine. Several of the guys in front of you get loose/sideways and your kart doesn’t, at least as far as I can tell. You also seem to run a wider line, especially in the double apex turn. Thinking back on your “tangles” what would have done differently? It looks like these guys aren’t afraid to rub, might try to better anticipate that in the future. Overall a good run. I like the track too.

Not sure where to put this. Posted on my discord by Scott Monison: 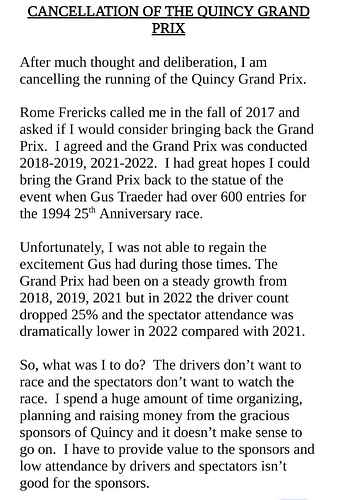 On a happier note: 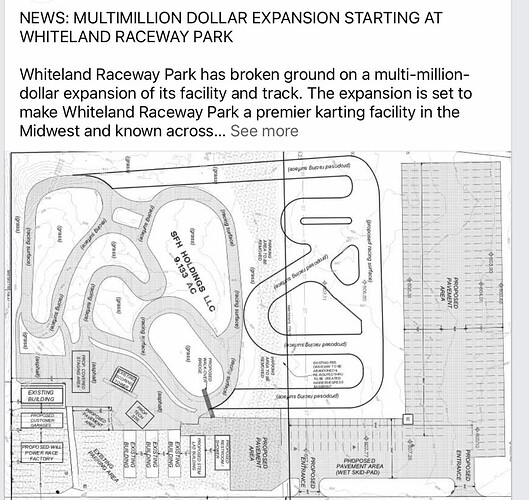 Little bit of a different video now that its Winter! My wife and I have been racing in the weekly endurance races at the local indoor track - SyKart. They are 30 minutes long and (unfortunately) are hot lap style and not racing for position. But, its fun to try to improve every time and get into a kart. The normal karts here are 6.5hp Sodis which are adequately fun with the tight, twisty and slick track. I managed to get enough qualifying times (based on lap times in the 6.5 karts factoring in driver weight) to qualify to run the 9hp Sodis last week. This endurance race was the first time I drove the 9hp kart. The throttle response and torque felt very similar to my LO206. They are definitely a handful around this track! I found myself driving with a bit more of a “flowy” and “slidey” style than with the 6.5 karts. The track was also in a reverse alternate layout which was fun too. Ended up 3rd out of 4 drivers who all had experience in these karts. Felt pretty good about that and most importantly, I had a blast. The only downside is that the seats in the 9hp karts can’t be moved backwards so I am super cramped. I had to brake with my entire leg as I can’t get to the heel stops due to the angle of my bent legs haha. 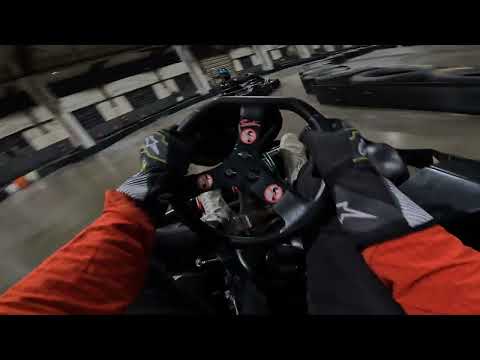 Indoor enduros are really tough on the body. I did one with Nick which was only 1hr long but we both got pretty worked. 17s laps provide no respite at all!!

Holy crap you made chapters for each lap. Wow!

Other than being cramped, how did indoor rental racing g feel, driving-wise, compared to your normal? I find that it’s different but not.

Was it fun? Would you go back? The one observation I had was that indoors is perhaps more tiring because of the limited real estate and lack of passing zones.

I see you letting the back end move in that one corner. I am not sure wether indoor makes that good or bad. You’d think that using the same logic as in lo206 and staying locked down would be best but there’s plenty of folks that say that sliding the rear around indoors is the way.

Looking at laptimes, 26.1 appears to be your consistent fastest laptime. Towards end of race you find more pace and start landing 25.x. I haven’t had the chance yet but I’d like to compare that one corner where you slide it a bit. I’d look at the 26.1’s and compare to some of the slower laps and see wether the fast laps are more locked down. Initial guess is yes but I don’t know. 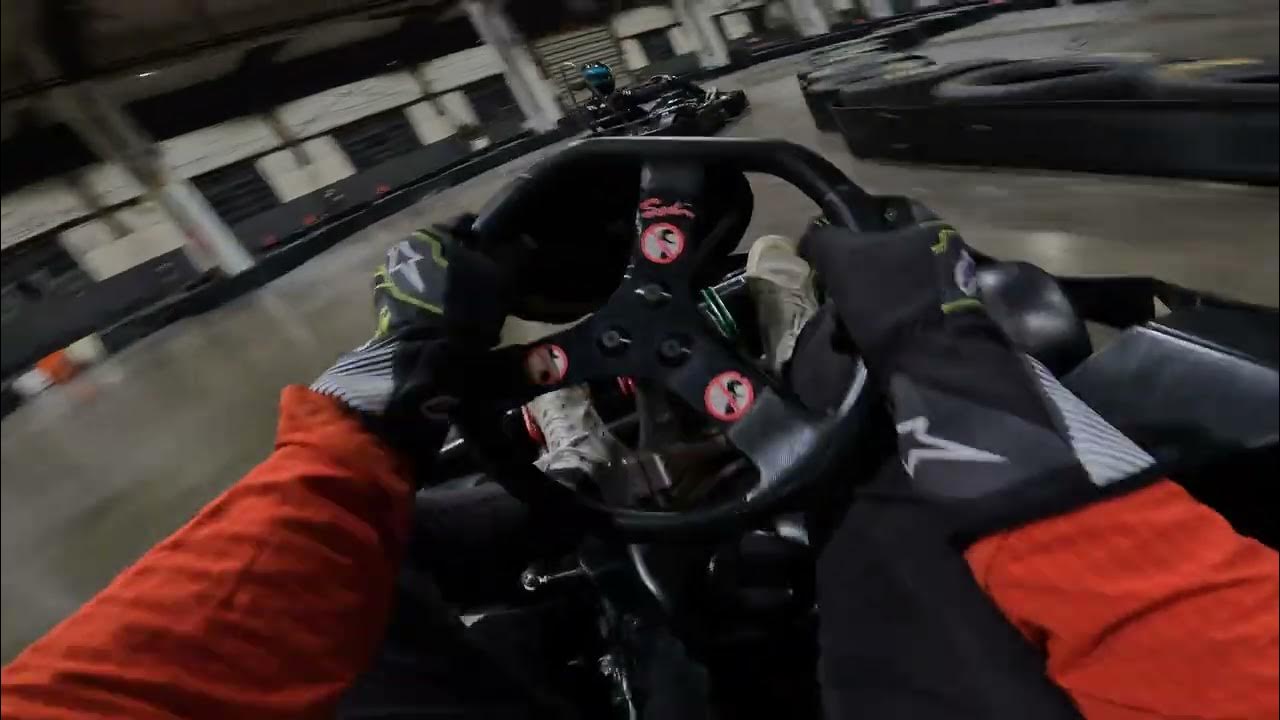 I find the G-forces to be less and overall, the driving less fatiguing overall compared to the local outdoor track (Pat’s Acres). Primarily because Pat’s has banked, high speed corners. This track is great for the space they have, but by nature of being in a warehouse, its tighter and lower speed all around. The surface is also not grippy at all.

I still wear my rib protector for these endurance races because I slide around in the seat and actually cracked a rib a few months ago. I sent it a bit too hard out of a corner and nailed the barrier on the side of the kart lol.

So as far as driving style, at first, I was using a more traditional style without letting the rear step out. But driving behind the fast guys here, it seems like they all do a “mini lock” style into the main hairpin. I was playing around with that method and was finding it hard to be consistent due to variations in the brakes from kart to kart and having to time the lock up, lift, turn in and throttle back on in such a short period of time. I’ve since gone back to a more traditional trail brake method and I find it much more consistent and pretty quick. With these 9hp karts, I was finding that they had enough power to not get bogged down if you let the rear slide a bit. But, I don’t know…all part of the fun!

As for the chapters, I figured out how to automatically add chapters from markers in Davinci Resolve (the video editing software I use). So I can just watch the video and hit the “m” key everytime I crossed the start/finish line and then those markers become chapters when it uploads to Youtube. I then used excel to combine the chapter timestamps and the lap times from the results emails SyKart sends out post race.

Last night in the traditional layout, I got 2nd out of 12 drivers with a personal best of 29.502. My previous best time was 29.680 so I was pretty stoked about that. The kid who won with a 29.0 is probably 50lbs less than me and works there lmao. I was using a trail braking style into the hairpin and will probably stick to that for now. In bigger news, my wife got 3rd place and set her personal best of 29.522!! Her previous best was 30.1 or so! She is really developing her skills well, loves racing and I love that we kart together! Stoked for the day she beats me!

That feature from resolve is cool. I was imagining you manually doing each lap.

“I still wear my rib protector for these endurance races because I slide around in the seat and actually cracked a rib a few months ago. I sent it a bit too hard out of a corner and nailed the barrier on the side of the kart lol.”

For the benefit of new folks… don’t assume that your ribs are safe in rentals. They are at even greater risk because you will get T-boned in a rental. The big cages and general lack of experience often translate into ridiculous sends that wipe folks out.

Also that one dude at rpm who t-boned me intentionally because he was slow and didn’t like getting passed… I hope you get explosive diarrhea for the duration of your honeymoon.

In bigger news, my wife got 3rd place and set her personal best of 29.522!! Her previous best was 30.1 or so! She is really developing her skills well, loves racing and I love that we kart together! Stoked for the day she beats me!

Last night in the traditional layout, I got 2nd out of 12 drivers with a personal best of 29.502. My previous best time was 29.680 so I was pretty stoked about that. The kid who won with a 29.0 is probably 50lbs less than me and works there lmao.

Congrats! When you are coming in behind the employees bit ahead of the patrons, this means you are doing it right!

The 50lbs thing is why I got so skinny. Ben and Henry and the rest of those little monsters had enormous weight advantages when they were 15-17. Thankfully they are all growing older and fatter.

Then, there’s @tankyx who, despite then being in his heavier phase would still manage to whoop butt (mostly). There was even a race where he got a got kart, broke the chain, mid-race, pitted and still won. 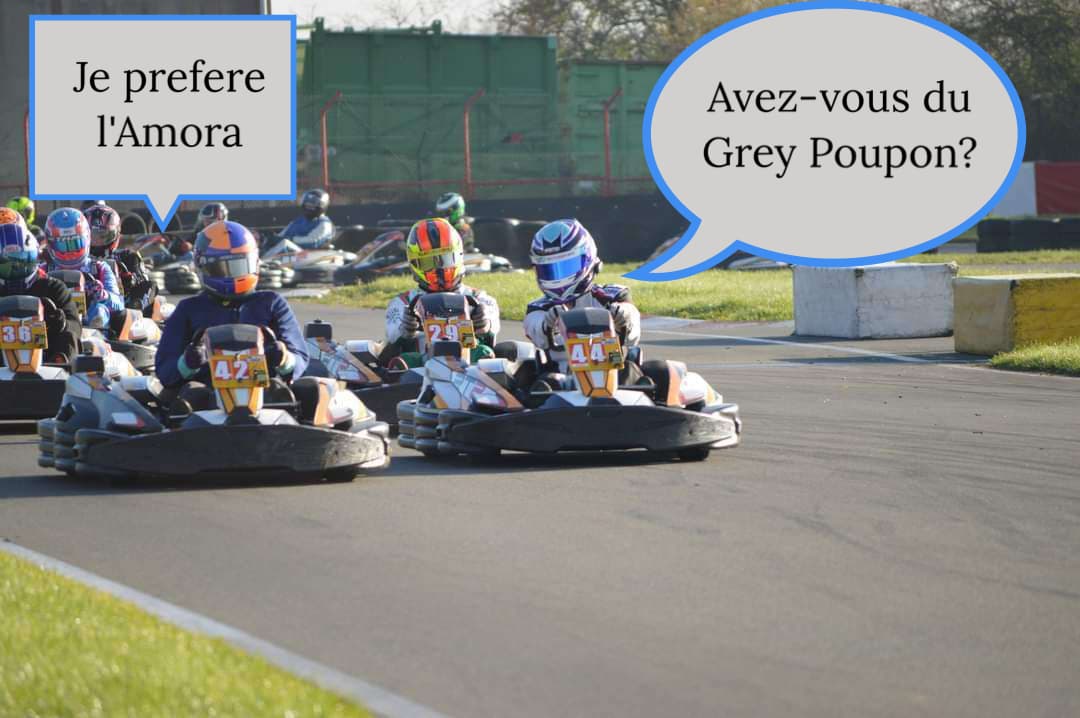 Then, there’s @tankyx who, despite then being in his heavier phase would still manage to whoop butt (mostly). There was even a race where he got a kart, broke the chain, mid-race, pitted and still won.

Proof you can’t stop a TANK!

If you need help, holler. If trying to post a video, it won’t work off the phone or hard drive, it has to be hosted somewhere like YouTube, etc. 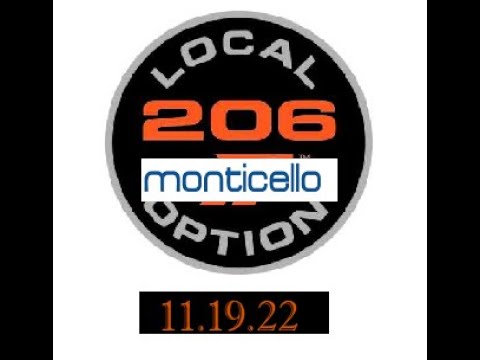 I find that my videos that feature crashy driving tend to get more views. It’s a legit career path, being crashy.

Hey, we forgot about our rotax pals: The RMC Grand Finals is the annual highlight of the worldwide Rotax MAX Challenge racing series. 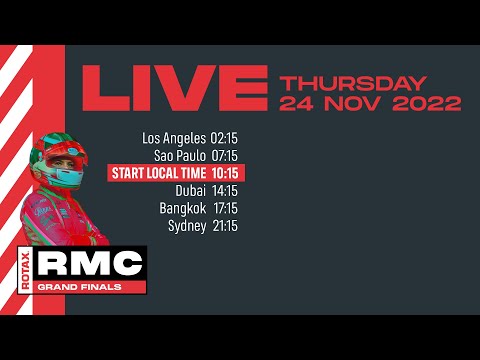 r/Karting - Karting race with Max, Checo, Pierre and Yuki for the Honda event