What are some other events that kart tracks could host? (Ideas for tracks)

Some folks do autocross on kart tracks

Autocross and drifting seem to go pretty well, don’t know why more tracks don’t take advantage of this. Would be awesome to see some cross-promotion of these events with karting as well.

Having a drift event on the Thursday of a karting weekend would be pretty awesome to expose two crowds to another sport.

Autocross and drifting seem to go pretty well, don’t know why more tracks don’t take advantage of this. Would be awesome to see some cross-promotion of these events with karting as well.

One of the reasons I think is that drifting can be hard on the track surface and the ground beyond it. But that seems like something that could be figured out/mitigated or factored in to costs.
Love the thursday idea.

I know Shawano has taken an absolute beating the last few years as the drift events got larger. Track surface is still smooth but it’ll chew up tires now and every corner has dirt covering the track.

Great place to race. Sucks that it’s not what it used to be. But if karting didn’t pay the bills something had to…

That’s true. As @Don_Westlie said, the track surface at Shawano is super abrasive now and that probably can be partially attributed to the drifting.

Its fairly common in Europe i think for junior motorcycle classes to use kart tracks.

Yea some of the tracks around me have been doing SuperMoto.

I would contact the local park district to see if the facility could be used for any need that the park district might have. It wouldn’t rake in the bucks, but it would connect the track to the local community (I don’t know how many track I’ve been to that the locals don’t even know exist) and could possibly drum up greater club numbers as a result. The issue might be the public-private partnership. I don’t know how that would work out.

VIR does SuperMoto, and I’ve seen bicycle races on Sunday morning (when they are closed and have to be quiet) at GoPro Motorplex. Lots of skid marks after the supermoto races, they slide the back a LOT, but it doesn’t seem to do any damage.

In the the UK they also used to hold markets/car boot sales, mainly on the car parks of race circuits. Could possible do that too. 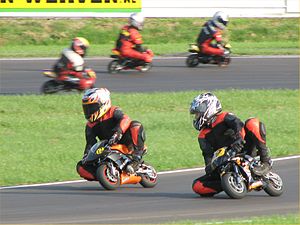 Pocket Bike racing, also known as Minimoto or circus racing, is a category of racing where miniature racing motorcycles (known as pocket bikes or minimoto) are raced around kart tracks. A typical minimoto is approximately one-quarter the size of a regular motorcycle, and is powered by a two-stroke internal combustion engine of between 40–50 cc producing somewhere between 2.4 and 17 hp (1.8 and 11 kW). The machines have no suspension, relying on the tires to absorb bumps and handle cornering, and...

We had a (non racing “fun”) pocket bike for a while at the store I worked at. Excellent fun.

In my previous life when I worked for a skateboard magazine we’d get all sorts of fun stuff sent to us in the hopes that we’d review it. One of the favorites was a go-ped. It was like a razer with a motor on the back. It sounds stupid but it was a lot of fun.

Imagine a field of 30 racing powered razers on a kart track.

Imagine a field of 30 racing powered razers on a kart track.

Not that you mention it, I remember we toyed with it at a kart track I worked with in the late 90’s/early naughties. Really it just ended up being the staff knocking the crap out of each other on the things, but hey, it was fun

Drift and autocross with karting is a great blend, but for SoCal, I find it tough to keep track conditions safe. For example, a place like Adams picks up a lot of dirt and gravel to include damaging parts of the track. Contrary to that, in Okinawa, they held great demo days where they combined mini-bike racing, karting, and drifting ride-alongs all in one day. The turn out was great, but the karting field was limited to a practice, heat and one main.

Tracks need/must get involved with neighboring schools. There is no better way to get a kart in front of the eyes of a 10 year old. You can make a variety of STEM and art projects out of a kart. This is by far the most frustrating thing I see with tracks today. I would love for someone to tell me why this is so difficult to set up. You have 4H programs throughout the midwest. Why not set up something similiar for karting? Create a highschool program! Now, Im not sure how SoCal highschools are structured, but in the midwest we had a metals shop and woods shop. Heck, we were making lean to’s for horses and gazebo’s for homes. Huge projects! Lathes and milling machines to make aluminum hammers as a decorative piece… aluminium hammers!!! Give me a cylinder head to bore out, jeeze. And that’s not even diving into colleges. Granted, the average college kid is 3 depths deep into debt, but who’s to say you can’t gain the interest of someone looking for something new. Lastly, military bases. Might sound weird at first, but think of a 18 year old who just joined, has denaros to spend, and has no outlet in his new neighborhood. Why not host a show, event, demo, you name it near one of the barracks? Convince them to use their dollars for an experience vice wasting it in a 90’s Mitsu Eclipse that was modified and now hardly runs.
Owning a track is difficult I know, but if there’s little effort to reach out, then there’s little ROI.

Pats Acres and PGP (used to) hold drifting events and small car TA events at their tracks. It makes for some really fun cross collaboration of events.

Sometimes the karters would get a few sessions with the drifters, and we could all show off and share our vehicles with each other.

Scooter racing (this is at my local track growing up).

Heres mini moto (someone called them pocket bikes) at a kart track in the uk.

Going left field here, but usually tracks have a lot of space. Why not a shooting range, (UK would do clay pigeon shooting)?