What are suggestions for helmet painting?

So, yes, there is our resident helmet painter on the forums but I was wondering if anybody here has tried painting helmets before? I have an old helmet that I can’t even use for competition anymore that I wanted to try painting for fun. Any recommendations on paint brands or methods to use? I didn’t plan on doing anything fancy, just a little winter project for fun possibly

do you have airbrushes?

That’s about the extent of my knowledge.

We have small ones for model cars?

You can try that.

It’s a bit discouraging to paint helmets IMO, since they are only good for like 10 years.

It’s already past the Snell certification for a helmet, so it’s just a for fun type of project. Either way, you’re supposed to replace helmets about every 3 years, so I feel like it’s a good representation of how you are and how you change as a person if you get each one painted

You can do it with just an airbrush but to clear it you will need some kind of actual spray gun. Harbor Freight has some really cheap stuff that will do the trick if you’re doing it as a hobbyist.

Createx makes good paint for playing around with. It’s cheaper and not as quality as the House of Kolor I use, but it’ll work for this sort of thing. You can also use aerosol cans too if you aren’t picky about finish as much. You’ll need an appropriate clear as well. Autobody stores usually have some on-hand.

You’ll also need an air source, so a compressor capable of running all your brushes/guns. Also some kind of booth/ventilation so you don’t catch a nasty huffing buzz or immediately die of lung cancer. I’d also recommend some nitrile gloves to keep paint off your hands.

It’s definitely a bit pricey to just do it once as a hobby if you want to do it right. And there are a lot of steps. But it can be done.

I’m open to answering questions if anyone has them!

Spray bomb it black. It will look GREAT.

I had an end of life (SA2005) helmet and thought, whatever I’ll paint it. I did it the cheapest way one could possibly do it. 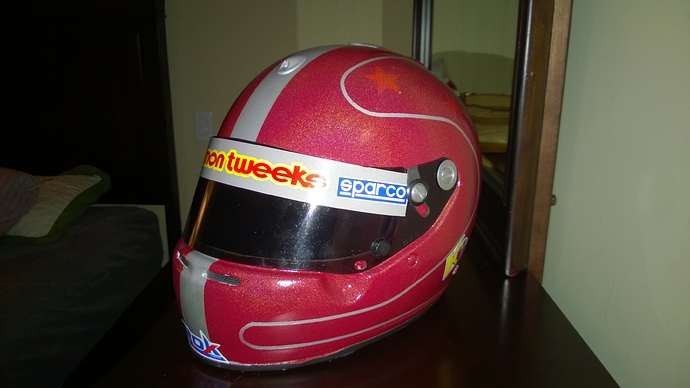 So my errors, I didn’t know I could remove the rubber trimming and replace them. I probably didn’t leave each coat to dry for long enough and I probably put too thick a layer on each time. There are ridges on the detail which annoys the heck out me and I live in fear that it will run in the rain (even though i know it shouldn’t). One thing I am happy with is I used a clear coat with a sort of rainbow sparkly thing in it.

But it looks ok on track and realistically that the only time most people will ever see it. 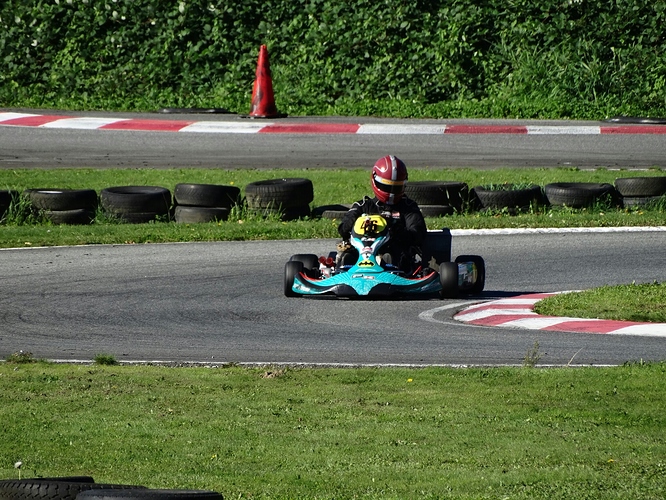 Point for guessing the inspiration behind the design, I had this design in the late 90’s before I went with yellow one you might of seen in other pictures. @KartingIsLife should know.

No points for you, think Northern Ireland, motorcyclist.

Joey Dunlop. I saw the stripe down the middle and thought of one I remember from S1