What Got You Started In Karting?

I certainly wish I had started karting much earlier. My dad raced gearbox (shifter) karts in the 60’s and early 70’s in the UK so I was fully aware of karting at a young age. My dad actually built me a shifter kart (Villiers 8e engine) in the mid 60’s that I drove the wheels off in our back garden whenever I was able to. Dad mounted the pedals on the steering column support so I could reach them. I was about 5 years old at the time! Anyway I got side tracked with two wheels in my youth and ended up racing motocross until I was 20 sustaining too many injuries! I then decided to get into karting and dad was completely on board. He supported me for 10 years coming to nearly every race and being one of my sponsers throughout. I started out racing the 210cc class then went on to 250’s. They were some of the best years of my life and I still have friends from karting to this day. My only regret is not starting racing sooner and maybe then getting into cars, who doesn’t dream of racing F1!!! I was at least able to race at Silverstone (an F1 track) in the British kart GP many times. I know the karting scene is a lot different in the USA (where I now live) but it would be interesting to hear other peoples stories.

Incidently I am just getting back into the sport at age 62 for fun with a Rotax max that I was given.

I’ve posted some pics of my dad and myself below through the years. 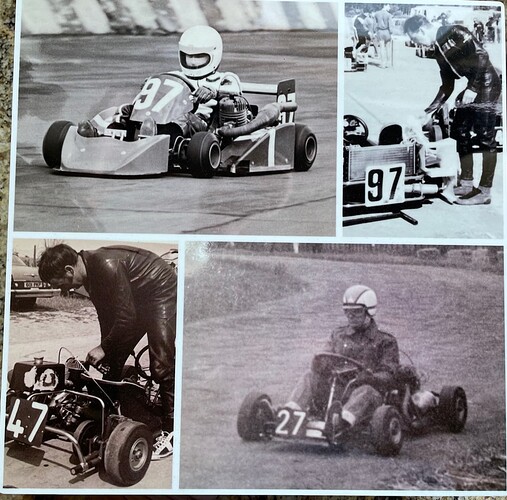 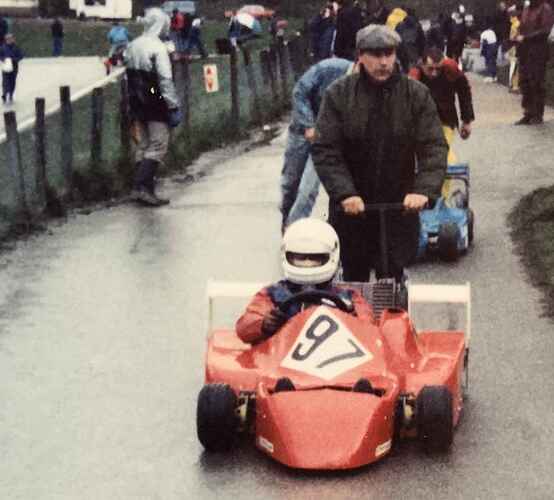 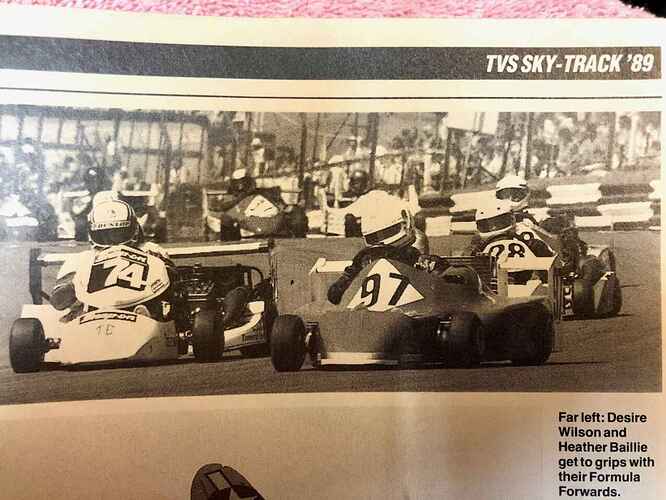 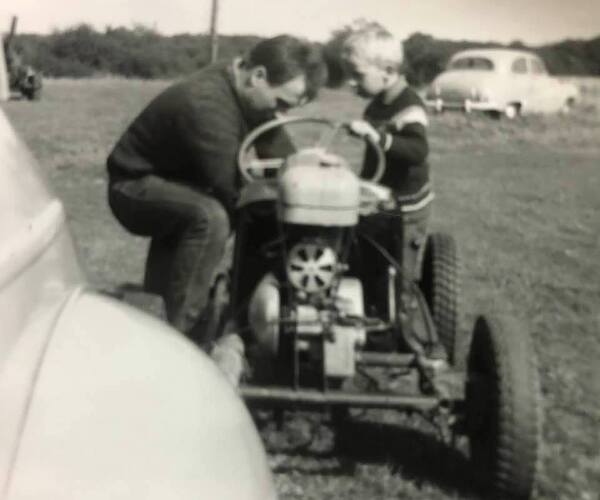 I think it’s a great idea. Your story sounds lovely. I wouldn’t be surprised if the common theme in all our stories is family and friends made along the way (our tribe, our larger family).

Lemme give it some thought.

I bet I can drive this thing 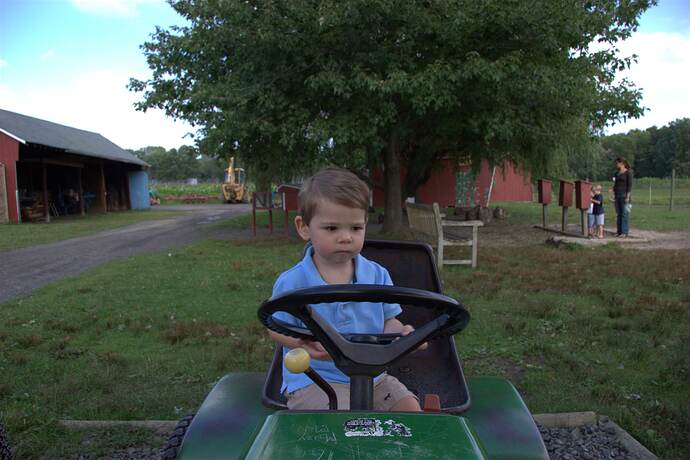 I used to enjoy playing golf and my little guy liked coming with me and driving the kart. (Yes I know I am a terrible parent and a bad person for breaking the golf club rules). Regardless, there is a rather complex roundabout that connected two tee boxes, with a tight wall to the outside and big tree on the inside. Super narrow, super tight decreasing radius twisty nightmare of a turn. I was pretty sure that this might prove too much for him, but I was wrong. Nick nailed it beautifully.

It struck me at the time that for such a little fellow, barely able to reach the pedals, he did something really complex, naturally and intuitively. I was blown away by how much the adult in me had underestimated the abilities of a child. It is this experience that inspired me to start us karting.

It is very difficult to decode karting as an outsider, looking interestedly in, I discovered. I knew that kart racing existed, had seen pictures. I also knew about indoors stuff because of birthday parties and the like growing up. (In the USA bowling, skating (roller and ice), and go karts are popular birthday party activities).

We started with electric indoor at RPM in Jersey City and figured the basics on our own. But, I wanted to do the race kart kind of karting and for the life of me, I could not figure out how to get going in that locally. The only thing that I could find was the F-Series website but it looked kind of intimidating and didn’t seem like it was beginner friendly.

I cast a wider net instead and decided to do some trips with Nicholas further afield so that he could also experience travel and see other parts of America. 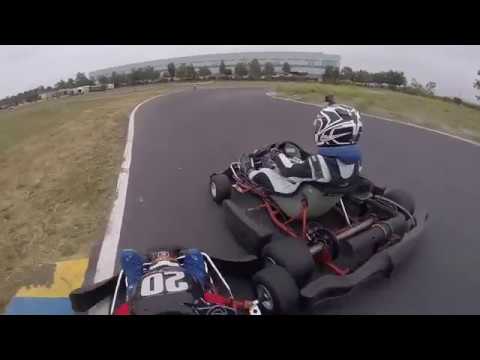 I stumbled upon Jim Hall in Oxnard and it rung absolutely all the right bells. They had an intro to karting 2-day session on their own equipment on their own track. 6 months later we were back for another 3 days. Then, a 4 day session. Nick graduated from the putt-putt (4-stroke kid kart) and into the 100cc 2-strokes with dad. We were hooked. And, we had really great coaches helping us get a clue! 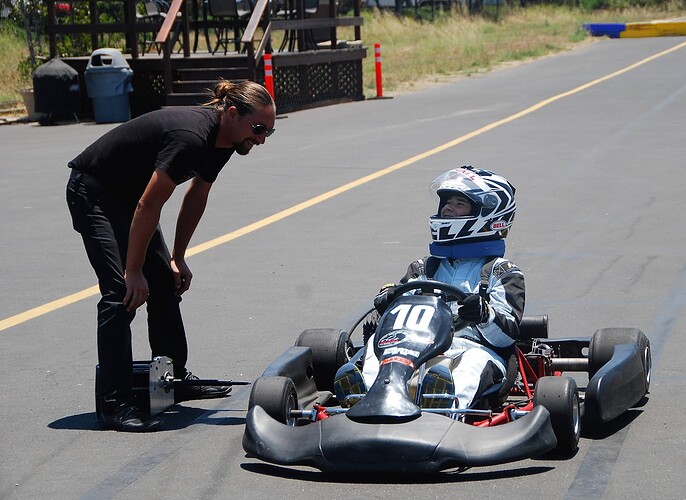 Then things went bad for Jim. The Oxnard fires zapped his house (but the fire blessedly jumped his garage with he and his dad’s famous racecars. However the house was completely gutted in the interior, though from the outside it looked fine. I think a lot of he and his father memorabilia and trophies, photographs, etc. were destroyed, sadly.

To further complicate life for Jim, the company that he leased the land from for the Club needed the land back for an expansion. I think this one-two punch made him decide to retire. This was a great loss to karting, imho. Jim and his team were fabulous and Nick and I loved, loved, loved it there. Thank you Jim. Nick and I will always remember all of you fondly. These were special times for us. 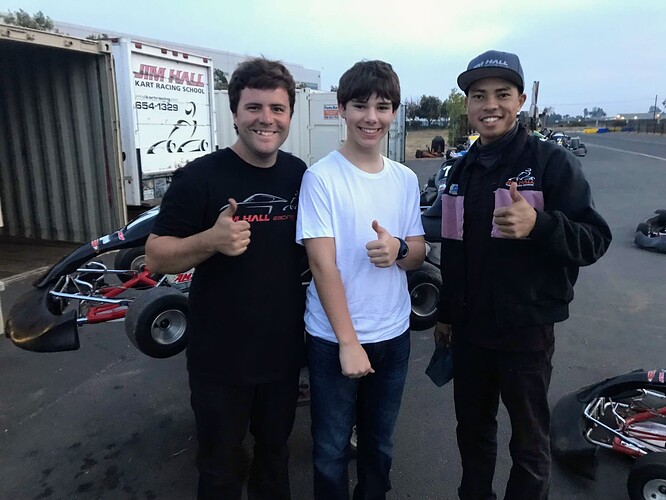 By this point, I was getting more informed and less intimidated so then we went to talk to Marco F-Series Race Director) and he introduced us to John Bonanno (Legend!) and Jerry White (Mechanical God). We decided to buy a couple x30 Compkarts and dived into the deep end! 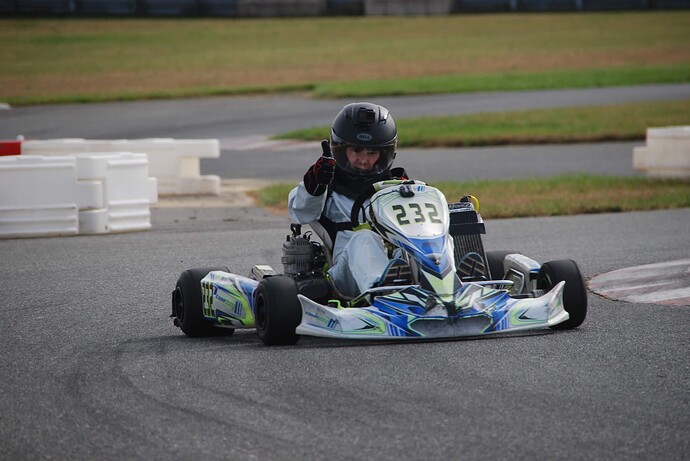 Nick and I then raced under Jerry’s tent (Kartworkz) for two years, until life got in the way. This were very happy times for us and we really enjoyed being with Jerry and the gang. We got competent enough to be competitive and had a really great time.

Nick karting video we made for school application 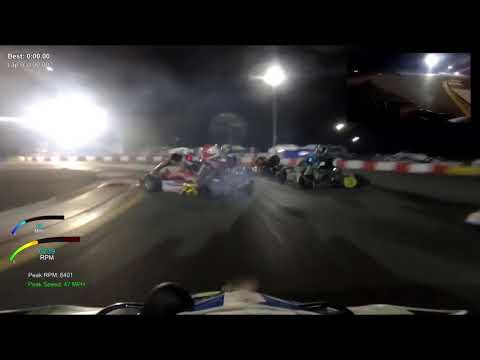 Eventually, we had to let the 2-stroke racing go and spend that money on education instead. But we soldiered on doing NJMP outdoor rental racing and made a ton of new friends in the process. As time passed and homework and the like grew more demanding, Nick raced less and less.

Some of the United/TKC gang getting older at NJMP: Left to right: Nick, Matteo Juliano (TKC Co-Founder and Race Director) , Me, Andre Lafond (AKA Formula 1600 hot-shoe Adrian Lovehand), Ethan Oring (Talented fella who races 2-strokes and Impressed me by winning an enduro with me first time out, founder of our karting Discord and successful entrepreneur.) 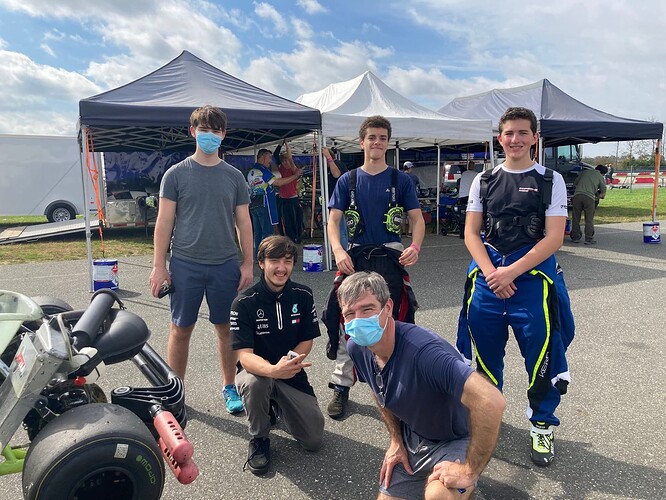 Nick is 17, going on 18, now. We race together still and it is our “thing”. We do endurance races together a few times a year and maybe a few rental races. He just fell in love for the first time so I suspect the karting story will become more about me and less about us going forwards.

Almost all grown up and a pretty decent driver, too. 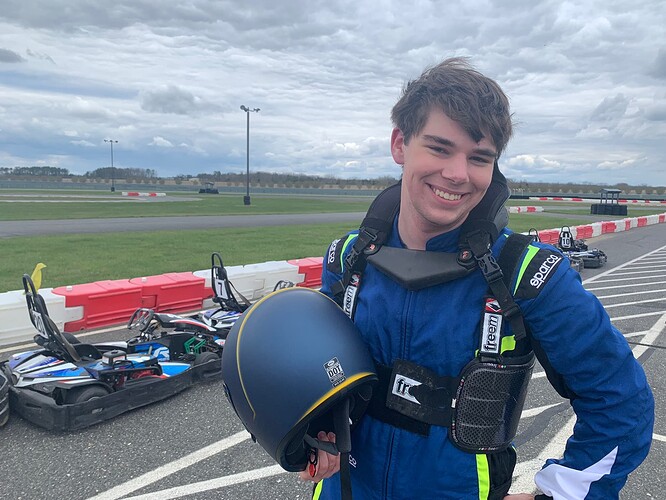 Here’s a video clip I discovered in which the narrator praises his driving: 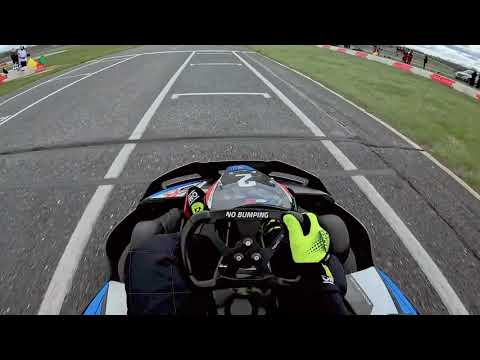 I am ok with that, (him moving away towards other interests and desires, without me). My work here is done, I think. Now I just wait for the grandkids and family racing.

Karting has served Nick very, very well. It’s helped him grow in ways that I bet every other racing/karting dad has seen. He’s much more confident and self assured. He’s that capable child I saw navigating that krazy turn in a golf kart, 8 years later, but better for his time under the tent and behind the wheel. More mature, tested, confident.

We found nothing but kindness, really, in our journey and I think it was a very healthy and meaningful part of his (and my) growing up experience. 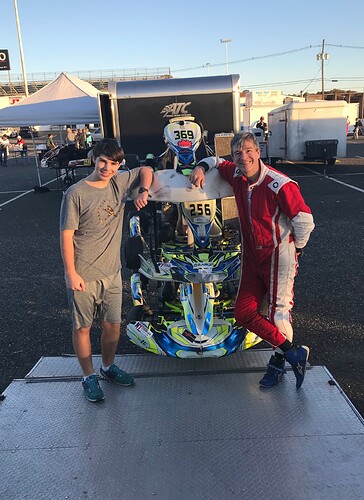 So, from Nick and me, Thank you all.

For me it was two fold. I moved cross country (Oregon to Florida) for work during the height of Covid-19, so I was sitting around in a new area (bored) and I didn’t know anybody. Then I stumbled across two YouTube channels:

Then I realized I had a track about an hour away from my house, so I went down to check it out and I was hooked. Now I have my 8 and 6 year old daughters into the sport, so things excellerated quickly. At this point I think it would have been cheaper to get my credit card stolen, but I’m still having fun, lol. 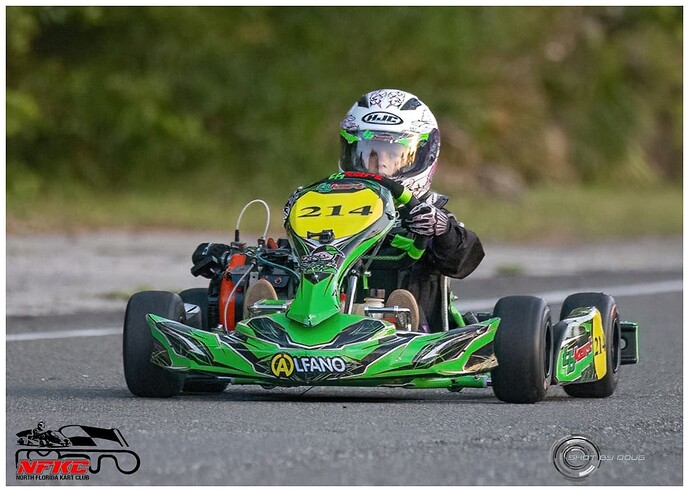 My grand-father used to be a mechanic involved in Rallying (Monte carlo specifically) and my father was always a fan of motorbike racing, so they gave me the racing bug.

Then my older brother started to work at a karting track 15min away from my parents house, so they would drop me off there at 6 years old and I would drive the adult rentals (9hp hondas) for hours while my parents went to the grocery store.

That is truly a great story, glad you got to do that with your boy.
I actually got back into racing motorcycles (supermoto) when I moved to the States so my son followed in my footsteps there until he joined the Navy. He is out of the military now and is excited about getting our Rotax to the track as is my daughter. I’ve done endurance races with my daughter in the arrive and drive karts.
What a blessing it is to be able to share a common passion with your kids!

Browsing the Internet and found the old karting-centric (predecessor to EKN) Mueller Mailing List or something like that. Found a kart on the classified listing and bought it. Found local tracks and visited one. Started racing Yamaha pipe, FY, and can with the same engine on a TonyKart Espirit at Monrovia, Sandy Hook and Nichols. Would race Sauturday night at one track and Sunday at another. Was hooked at the end of the first lap.

Yeah there’s something that clicked that first time. It makes you want more and more.