sorry if this is a stupid question, but I’ve been looking at the local classifieds to find an inexpensive chassis to get my butt back in a kart after 15 years away. I keep finding these CRG “F1K” chassis advertised quite cheaply and I always thought the CRG chassis were pretty good. I googled F1K and couldn’t find any information on this chassis, if it’s for a 4 stroke, 2 stroke etc., tube diameters anything like that. if anyone knows something about these karts I would appreciate the info, it’ll help me decide if I want to drop some money on one.

Hey Jim. Can you share some pics from the ad. We may be able to cross-ref it against a more well known model for spares and so on.

Does it seem to have a homogation plate or ughed details stamped on the rear crossbar or on the front bar behind the Nassau panel.

I believe that specific model was the “economy” CRG model; cheaper components etc. designated for a lower budget racer. No idea on tubing size.

I don’t have any good close up photos of the chassis, I asked the seller if he can look for any ID plate on the frame.

TJ any idea what age range that might have been?

iirc the F1K was part of CRG’s attempt to emulate EasyKart. It came with a Maxter 125cc engine and was supposed to be a complete sepc program. Cameron Motorsport had something to do with it I think too? I remember it was based in Canada mainly at the time. 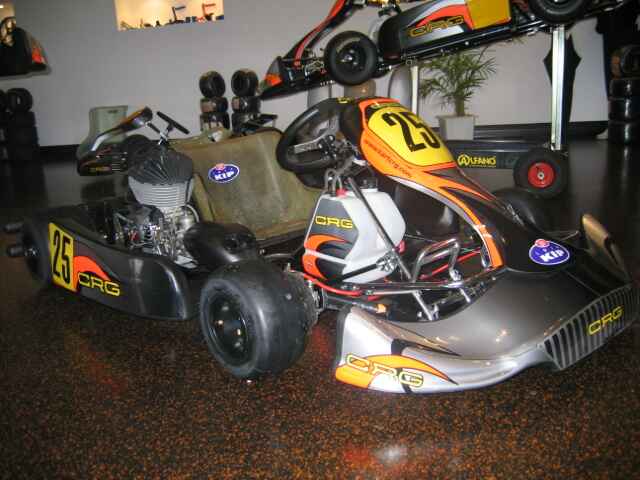 That would explain why I’ve seen so many of them in local classifieds, I live about 40 minutes from Cameron motorsports, my son just did an inter club race there recently. I drove on Bob Cameron’s team back when it was “hurricane racing” in the rotax class, driving these garbage “Hurricane” chassis that he imported.

garbage “Hurricane” chassis that he imported.

Yikes. What made them garbage?

They were Biesse chassis with Hurricane branding on them. A lot of guys on the team, myself included felt they were really unpredictable as far as changes made to them. I also heard rumours that the “top guys” on the team werent performing at the level they had in the past and were given CRG chassis’ with our hurricane bodywork and stickers. I dont honestly know if that’s a fact or not, but I do know the relationship with using Biesse in that team didn’t last long.

It took me over ten years to get back into karting and frankly i wish i took that extra year to save the extra money on a proper chassis/engine combo.
I wasted so much money on a old CRG KT1 rolle, rebuilding everything then buying a like new leopard. Ran it a few times, got mostly back in my groove and realized i need a better chassis and updated engine.
I now have a newer CRG blackstar with the ven05 brake system (simply amazing) and a iame x30. My frame is a bit fubar but after a few races my pace is only just under a second off. I dont practice, just do race days very few times a year.
What im trying to say it spend the extra time to save to get a really nice kart, nothing worse than having to do it all over again.

Good is a very subjective term though and it’s really down to opinion vs things that are objective or rational.

KT1 is a very workable chassis, with the brake system on there I’d imagine it’d roll with a 206 quite nicely. TaG senior of course is a little different, bite is nice to have.

I’ve found If the frame is straight and the hardware is in good shape, once you get the seat in a place that works, almost any kart is acceptable to start off with for your first season, sometimes beyond.