When (and How) to introduce braking

My son is 8 years old and is in his 1st season of 206 sports after 2 seasons of kid karts. Currently he only brakes when avoiding an accident. I have zero experience in racing outside of being a lifelong fan, so i feel I’ve reached my usefulness as his coach.

My question is: While it increase his laptime/overall speed/passing ability to drive harder into the corners and brake before entry vs just lifting and re accelerating?

Flllow Up Question: How do I teach this?

This is a video of his first race this year. Pardon the onscreen words. I’m attempting to make teaching videos for him to watch between races.

Braking can be a scary thing to learn because it requires additional motor skills and dexterity as opposed to just coasting, and it can cause a spin if you are too hard on the brakes.

In a slower class like 206, it’s hurting him a bit but as he moves up to faster karts, obviously it’s going to become imperative to master it.

The best money I (my parents) ever spent in karting was getting me a day of driver coaching at Badger when I first moved up from Rookie where we worked specifically on braking almost the whole day. The “cone exercise” seems particularly effective at teaching braking.

Essentially, you take a cone and place it maybe 25 ft from the braking point for a given corner. Have your driver brake at the cone. As he comes around for the next lap, move it a little closer to the actual braking point. Keep having him brake at the cone as it moves closer to the corner until he’s on the brakes at the correct point, or PAST the correct point so he can feel what it’s like to go beyond the limit and have to brake extra hard.

Since you aren’t a racer yourself, it would probably be a good investment to get a coach who has some experience for an afternoon. That way he can help with the braking, as well as ironing out some of the racing line issues and anything else that pops up.

Your learning videos are a really cool idea. They could supplement some of the at-the-track coaching. It helps to do the learning at the track because you can try something, go out and test it, and then try something else right away and see real-time results.

Also I’ve found with young kids, reward based teaching does wonders. Tell the kid you’ll give him a dollar every time he makes it through turn 1 without lifting. It makes a fun little game out of it and I’ve seen kids drive the best races of their lives when there’s six bucks on the line.

The training video is a great idea. I think I’ll make for for my kiddo too.

Couple of things, and I’m hesitant to say them because it feels almost like I’m telling someone else how to parent.

That’s great feedback. Definitely need to throw some positives in there for the next video!

And as for a driver coach I have had some discussion with Jaime at Franklin about getting some river coaching from one of his guys.

Is the braking soft to slow/set the kart, or is it pretty hard? And are we inline breaking or dragging at beginning of corner?

In a 206 it’s going to be fairly soft braking but in general the accepted technique in karts is hard initial pedal input and then trail off as the kart transitions from slowing down to turning. Everyone sort of has a different style.

Driver coaching sounds like a great idea! It’s funny how when Dad says it, they don’t respond the same way. After pre-finals this weekend Jerry (the guy who runs the operation we drive with) talked to Nick about how he was taking turn one and Nick magically totally changed it up in finals and did great. What’s ironic is that I had been telling him the same thing the day before but it went in one ear and out the other.

Overall I like what you have going on and he seems to handle himself pretty well. Looks a little different when you watch a video vs in the seat and hopefully he get to relax and notice some things he didn’t while busy driving . One of the dad’s locally drove a kart recently just to get a perspective on it.

What I am going to suggest is ask your son questions and have him give the answers. You can start off general and get into specifics as you see he is engaged and thinking. So instead of saying “Don’t lift” in debrief ask “why are you lifting here”.* Then you can have him suggest what the fix is. Kind of forces him to start accounting, figuring and thinking. @ 8 he might not be ready but try it. it could be a security lift or a handling issue, but let him tell you. Even if it is 1 thing and not a whole lap or whole session it gets him going in self help mode.

I would ask about running wide on apexes, running narrow on exit. Ask about the kid that zoomed through and have your son critique him or critique the guy he was following. Your son would make up and lose ground so that might be something to have him tell you about.

on positivity.
@ Skip Barber School: I did something perfectly and not one instructor told me. I had to hear it from the other students. I thanked the guys and told them it would have been nice to hear the 1 thing I did right along with all the wrong things I did.

the “/” was my attempt at an arrow to start the turn higher. I am new to video editing so I am learning ad I go. hopefully the next one will be a little better. I was rushing to get it done as I want him to watch it daily until we race again sunday.

my son is NOT aggressive as a driver. he won’t go full speed until he’s comfortable in a new kart or a new track. He’s also a learner through repetition. So that’s why we practice a lot, and hopefully the video will add to the reps in his brain.

This is what I did with my son and have done with a couple of other new kids. It works great.

Short hand for turn here - I like the pace note short hand idea. Will these show <>?

Right now I find not being too aggressive is a good thing. It did seem sometimes your son felt more comfortable coming up on the guy in front than others. Incidentally When I go out on a new track configuration, I like to follow the kids around until I get it memorized. The track here always changes layouts and direction which is good.

That is awesome!! thank you 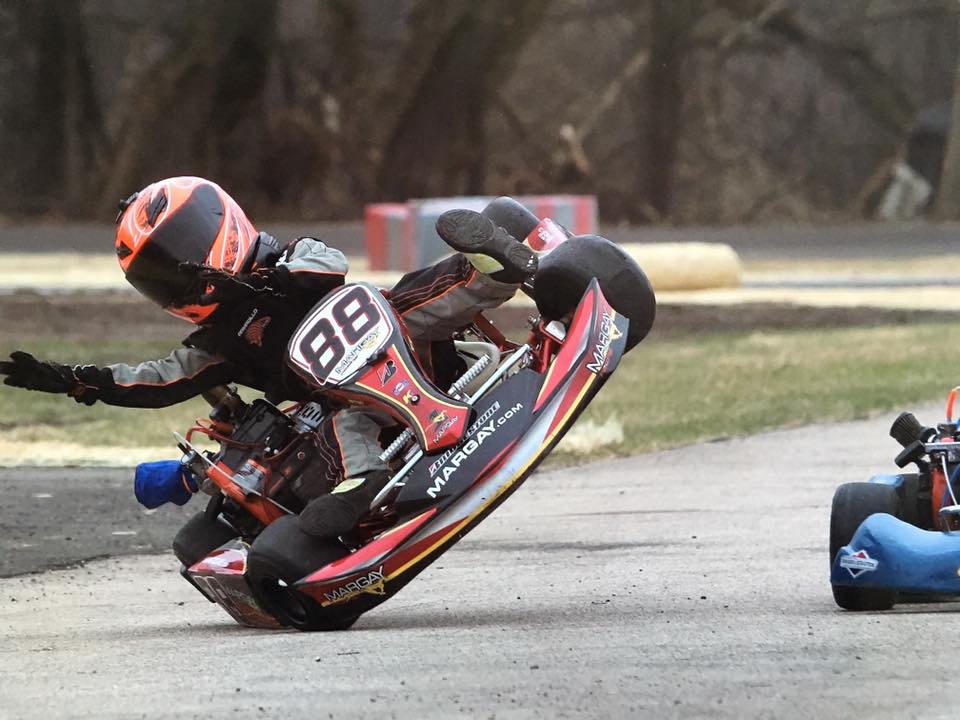 Still overcoming this mental hurdle when it comes to passing.

So here’s a follow up. After watching this weeks go pro footage it seems as though Blake IS braking. But now it seems like maybe too often.

any driving critique I can pass on would be great!

That’s a start! Keep reminding him to make sure he uses all the track. Once you’ve got the general racing line nailed, a lot of the other things like braking or throttle application tend to work themselves out somewhat out of necessity.

I’m with TJ on this. If he was my son I first* would work on the lines and only then focus on braking.

*the only actual first I think should be for your son to keep the joy for driving but I think you both got that covered.

You got some great drivers up there at Franklin with Ava Dobson, Cameron Brinkman and Logan Julien. See if you can get under a tent with one of them at an event or practice day and share data. It is a great way to actually show the kids what they are doing relative to some kids that might be faster. Of course you’ll want a coach to explain this to them and teach them to apply the info on track.

The faster the kart, the more they need to brake. 206 karts tend to like an elongated and gradual braking zone due to how narrow the power band is. This is all fine, but can make for some bad habits that can take some time to ‘un-learn’ in a faster kart.

I love the idea of those cones and doing maximum braking zone drills at the beginning of a day. I think feeling the kart squirm under brakes, and learning to modulate that and feel for it is great. Of course, most of the time in lower powered karts you won’t get to that point, but it still is great to know how the limit feels.