When do you change your tires?

I’m still on my first set of tires. They have maybe 7-10 practice sessions, some of which were pretty slow since it was my first time with the kart on a track. It’s fair to say they don’t have any “fast laps” on them, since I am not yet capable of turning in a fast lap. They seem to be wearing evenly and well. I don’t wrap them up between sessions–my driving skills aren’t worth that sort of effort yet.

Anyway, maybe this is a stupid question, my searches didn’t come up with much on point. But what are the visual signs that it’s time to change your practice tires? My searching found some threads on how to analyze tire wear, but they were oriented toward what it tells you about your chassis setup, not when they are worn out.

Maybe you just drive them until they are obviously torn up or produce noticeably less grip on the track. Fair enough. But are there clues before that?

Here’s what mine look like now. MG yellows on an x30 TAG kart. They seem like they have a lot of life left in them to me. 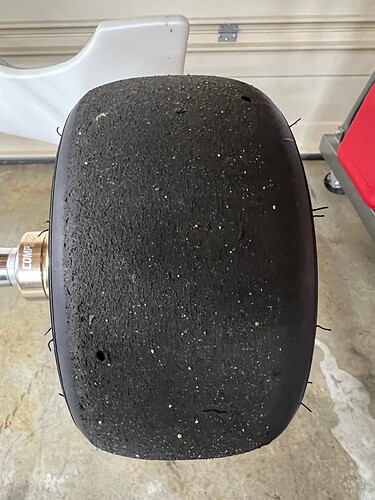 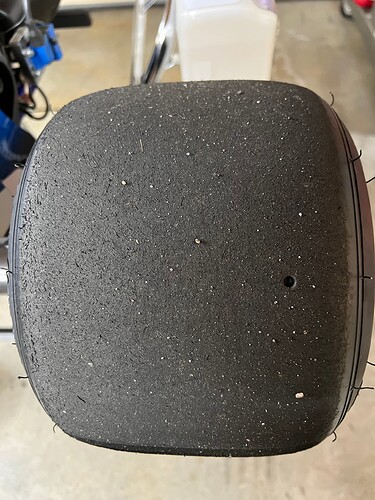 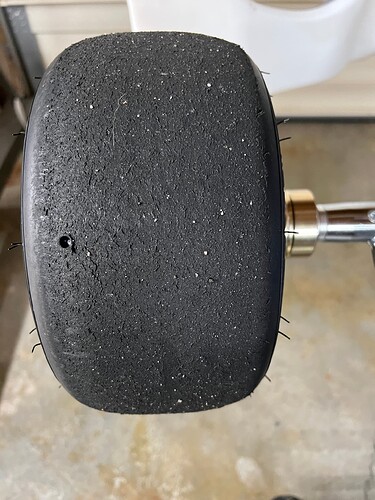 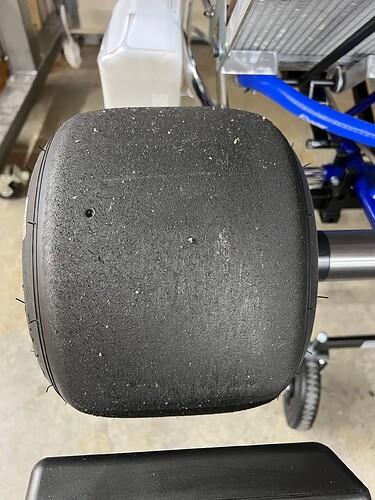 On MGs they will heat cycle and slow down before you run out of tread. When you’re new and just learning and not pushing the tires, I would run them down to the wear dots. Once you get consistent and quick enough, you’ll be able to tell once they start slowing down and falling off. Tires are always best and grippiest when new, but the drop off isn’t always noticeable to new drivers who haven’t developed a feel for the kart yet.

I would run them down to the wear dots

Thanks! Are these the wear dots? 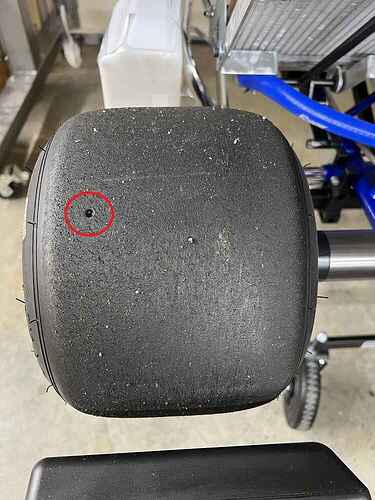 Those look good. You’ll want to pay attention to the inside wear dots in particular since that portion of the tire sees more wear. Also if you see cords then you know the tire is done

I’ll post a pic of a tire down to cords when I get home for reference.

VideoCapture_20221201-192936516×1140 69.7 KB
As long as the tires don’t look like this you’ll be okay for a while. Once you’re starting to feel consistent and reasonably quick you can throw on new tires and see a bit of a difference. If you see this diagonal thread pattern you have gotten your money’s worth from the tires
5 Likes
Andy_DiGiusto (Andy DiGiusto) December 2, 2022, 12:46am #7

Also, as you see the interior side wearing down faster, you can flip the tires on the rim so you can even out the wear.

I bought a durometer so that I can keep tabs on how my tires are doing. In terms of practicing I’d be just as happy to run them to the cords if I can, but if the leap in the durometer reading gets to be enough then I’ll pull them off. Over a small sample size, MG Yellows seem to be able to hold up to more heat cycles than MG Reds before massive hardening sets in.

So how often do you measure the durometer? Start of each day? Between sessions? I assume you want the tires “cold” at ambient temp to do this?

It does sound like interesting data to have, curious about the process to make the data useful. Maybe I’ll invest in one of these, they’re not too expensive.

I measure hardness of the tires at different times - beginning of the day, sometimes throughout the day, and even at home (to help evaluate whether to run a set again or not). It’s very interesting to see the different readings that come back at the different times as well, and there’s a lot to learn there. Obviously a dead-cold tire reading is going to be very different than say a warm tire reading, but all of them can be useful in evaluating the state of a specific set of tires, as well as how the rubber reacts throughout various conditions.

It’s also good data to have as a sanity check, in terms of knowing if the tires are really the main reason for poor performance in either lap time or handling characteristics. For instance even if a set of MG Yellow tires has been cycled several times and could be considered worn’ish, if the durometer still reads in the 50’s I know that they’re still gripping quite well. On the other hand when I see MG reds start hitting high 60’s or even 70’s then those are going to get the boot. There’s definitely some art and experience to figuring it all out, but at least it’s based off of having objective (if variable) data on the state of the tires.

We used to carry a durometer when the Bridgestones were very inconsistent, and we’d hand-pick all our tires out of the crates at the shop, choosing the softest of the batch.

I haven’t found that inconsistency lately, but it does happen. Having a durometer isn’t a bad idea just to confirm or deny suspicious tire behavior.

Is there any truth to the rumor that the tires at the SuperNats were very inconsistent.

It was evident tire wear was an issue and it seems some people experienced it more than others. Whether that’s down to the tire or setup or driving style is probably up for debate.

However, I would say that the many drivers who shredded their tires down to the cords is clearly some kind of tire batch defect. That tire at that hardness shouldn’t be that destroyed after a weekend of racing.

It interesting that SuperNats is a low grip track, yet the tires were shredding. I heard that tire pressures were up from the normal.