Where do you mount your transponder?

Where do you mount your transponder? Is there a common location? Pics and some pointers welcome.

I think most clubs may have slightly different rules, so I’d check the one you are with to see what they specify. Here is ours:

TRANSPONDER MOUNTING: Transponder must be mounted so that no part of the case is closer than 8” aft (e.g. to the rear) of a line extending between the centers of left and right front spindles.

Typically the rules require it to be mounted on the sidepod, a set distance from the front spindle as Bryan said, or on the back of the seat. It depends on what your local rules are. Check your rulebook.

The series that we run, require the transponder to be mounted to the back of the seat, a certain distance from the ground.

But do people typically mount to the side pod? Small diameter screws into plastic I’m usually not a fan of. I see the screws coming loose at some point or having to redo them often and the side pod looking like swiss cheese. Not really finding a good spot for zip tying it also.

I’m use to the old red wired transponders for cars that need a clear line of sight to the track. It that same for the karts on the side pods? Do they have to sit vertical or can they be side way? I been told different things from different sources, but not seeming to get the full story of probably mounting it from anywhere.

I always just zip-tie mine to the front vertical sidepod bar. Have been doing it that way for years and have never lost one (knock on wood). One zip through the loop on the transponder, and two wrapped around it.

I used rivets into the sidepod. They won’t back out.

I’m use to the old red wired transponders for cars that need a clear line of sight to the track. It that same for the karts on the side pods? Do they have to sit vertical or can they be side way?

Best practice is to have nothing metallic between the transponder and the loop on the track. Especially with the kart X2 which I believe has a lower signal (But longer battery life) compared to both it’s predecessor TX160 and it’s car X2 contemporary.

ie, avoid putting it above the floortray if you can (Again, best practice but not always necessary) , but otherwise for signal you’re golden.

Do you have a transponder bracket? It should bolt onto the sidepod with couple of nylock nuts and be good to go.

Went for this location. Drilled some pilot holes, put some silicone on the screws to prevent them from vibrating loose. The metal nerf bar runs the entire length of the pod, so any where on the inside of the pod is above metal. Put it is close to the ground.

I’ve always mounted mine vertically and that’s how I’ve seen most mounted.
Some useful info:
https://speedhiveblog.mylaps.com/the-definitive-x2-transponder-guide/

I’ve this device and believe it’s called a blind post. It’s rubber and acts like a dry wall anchor. 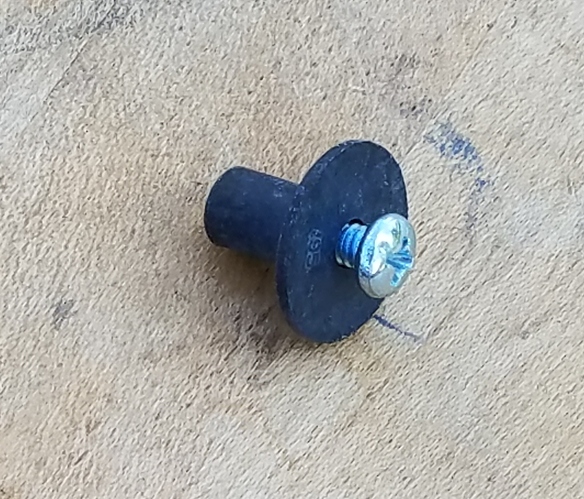 I was thinking about using dry wall anchors, what I would want to make sure they are ok for the thickness of plastic. Rivets also mentioned above would be good. But I need to good buy a kit.

Hi…we don’t need them to be visible so I mount mine to the left of the rear view mirror at the top of the windshield. You can barely see it and the switch on the transponder is in easy reach in case I want to take the toll lanes and have enough people riding with me to ride them for free.

I put mine on left seat strut. Zip ties.