Why do karters do FREE advertising?

I have been racing kart-like vehicles for my whole career, some 35 years now. When I first started karting, breadbox pods were in style, and while there were plenty of “factory” decal packages, many people ran them plain, or had their own custom graphics done.

Now, it seems that every kart I see is a “factory team clone” ride, with the only personalization of drivers being on their suits (sometimes) and helmets (often.) Why is this?

The great Jack Hewitt once quipped, “@ss, cash, or grass, nobody rides for free!” in reference to his rather plain looking race car and helmet. I try to help out those who help me out with representation, and confess to wanting to “look the part” in earlier days. But what are your thoughts on why most kart
ers appear to be factory graphic clones? 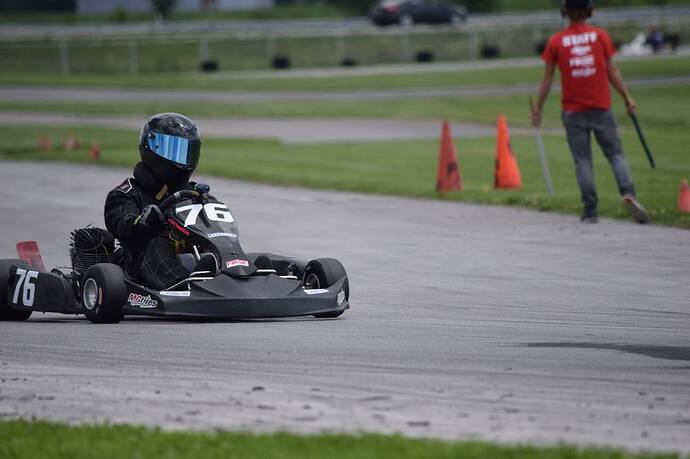 I agree to some extent that you shouldn’t advertise when you aren’t being paid, but I think most karters have some pride in the brand they run. I know I always was eager to have the factory decal kits when I was younger because it made me feel more apart of the team and made me look more professional. Now of course I design my stuff to actually promote my biz and I think that’s cooler.

I have my old breadbox bodywork collecting dust at my shop and I’ve debated running that on my modern kart actually.

I was a fan of the Unico nose with breadbox pods: 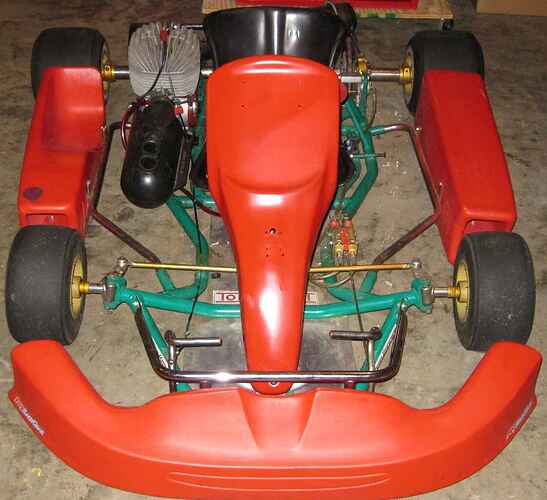 Imho it doesn’t really matter one way or the other, we all run what we like

I only run practice days atm and don’t want to be pretending to be a pro. However I have a custom painted helmet with my old race number and I even feel a bit of a poser wearing that

I like that black suit what is it? Probably a bit warm for here in SoCal though!

Admittedly, I like the aesthetic of a good graphics kit, but I would also argue that they clean up easier than plain bodywork. Bare plastic looks good when it’s brand new, but not much beyond that.

For the same reason that every hobby/sport participant does the same thing with their gear. It’s kind of cool to pretend we are pro. Also, if someone drops their coin on something, there’s a bit of tribalism around that.

Personally, I am with you on this. I am not a kid and I would rather have a livery that speaks to me and who I am. I someday want TJ to help me design a weed inspired livery and suit (this is never happening but a lad can dream), or alternatively a pirate theme outfit/livery, or whatever. I prefer the creative stuff like that but it does require work and it requires being ok with standing out and calling attention to yourself.

With the custom suit I got from Nick Goodfellow when he was importing Torq, I had a big Spitfire flaming wheel embroidered on the back.

I did so because in my past life I was the art director of Thrasher Magazine (skateboarding magazine, cultural icon). The logo references my past. It’s also playful and fun and looks like it could be motorsport related, which I enjoyed. I also had a giant Spitfire logo on my Daihatsu Charade back then, which was very tounge in cheek as the car was a 3 banger and not fast at all. @Bobby is modifying his current Charade to be track car. Suspension,engine,etc. His will be much faster! 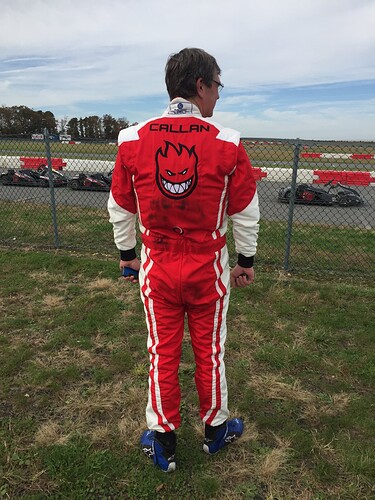 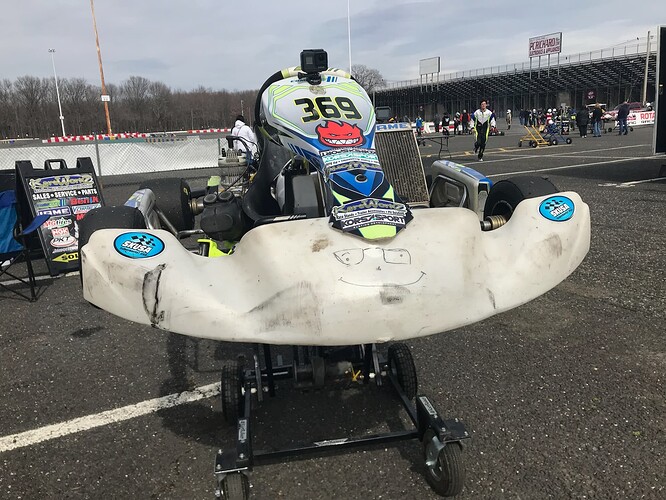 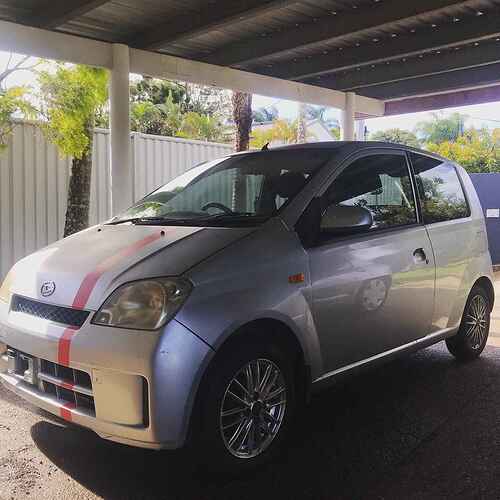 I prefer the creative stuff like that but it does require work and it requires being ok with standing out and calling attention to yourself.

I often think about going this route, and wish more people would. Obviously convenience plays a big role for most (myself included)…much easier to just slap on the graphics that come with the kart, or keep the existing graphics if buying second hand.

Earlier on there was a gentleman here who was into making clothes and fashion stuff. I recall a couple posts where he modified/customized some of his gear. Was it @phastafrican ?

Personally I subscribe to your mindset. Right down to our rentals that don’t have manufacturer decals on them

Now, it seems that every kart I see is a “factory team wannabe” ride, with the only personalization of drivers being on their suits (sometimes) and helmets (often.) Why is this?

Because due to vanity, the (perceived) value of that image and status is greater than the paltry monetary value that one might find by finding a sponsor. Plus sponsors are more work.

It’s easier to look “cool” than to do the work of finding sponsors… Especially if mom and dad are funding the ride.

K1 Racegear, but it’s scratchy. I have a G-Force now that’s much better. OMP is the best I’ve had.

Were you at Thrasher during the Trackmagic days? I read Thrasher, and BMX Plus! and ShifterKart Illustrated with equal parts envy and admiration…

Yea I was.(1993-2000). Memo was around frequently. Fausto had me do their ads, (product photography/layout). I think Gary came after I left and went to finish my degree, get married, and become an adult. (The adulting part failed).

It never occurred to me to get interested. At the time I was making the princely salary of 35k a year in SF, so I lived cheap, thus I never considered karting. Had I known, I coulda been hanging around the team, pretty much doing whatever needed doing, had I asked, probably. But back in those days, I was all about surf/snow.

There is one scenario where accurate sponsor stuff is not only cool but I think mandatory: historic stuff like @Alan_Dove House of 100 series. Just like vintage race cars, imho. I forgive the old Marlboro liveries etc because it was from a time where it was pretty much woven into the sport (tobacco money).

Love the “Back in Black” color scheme 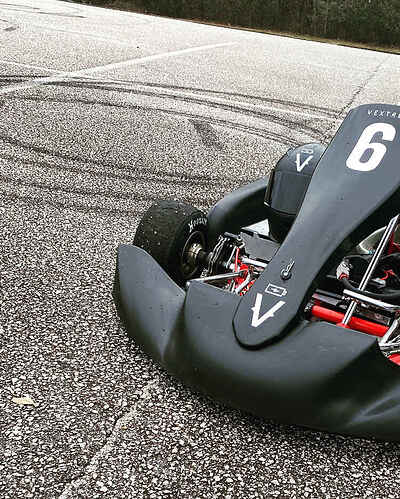 In my case I advertised it because I got a discount for advertising that brand of chassis, but I didn’t use their sticker kit because I thought it was really ugly, so I sold it and made my own graphics: 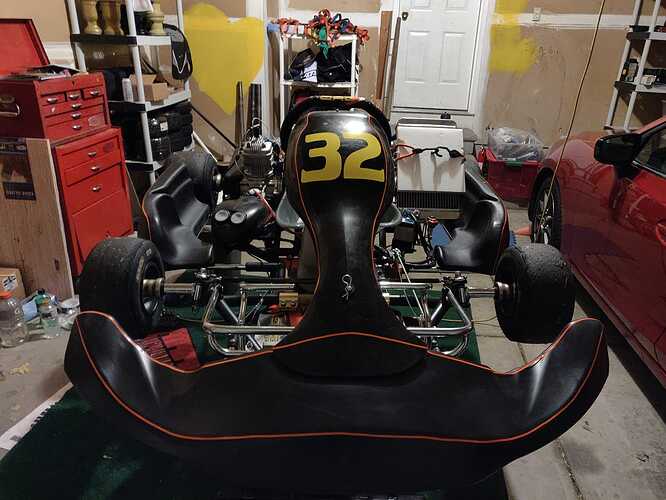 That’s another aesthetic I’d like to see evolve in karting deaign.

I make my pinstripes with graphics tape and a knife. I’m just not good enough with paint to get a show-quality line and the surface finish on kart plastics is rough. My next kart will have white bodywork with green and black pinstripes. 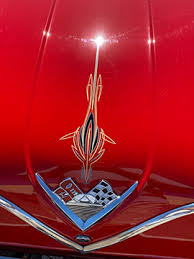