Why does more weight on the tire reduce the grip?

Hi,
Could someone explain this in physics? 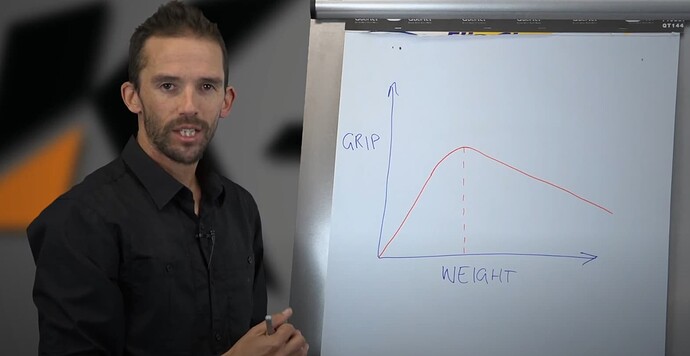 P=FA, so grip should increase as more force is applied. My off-the-wall guess is that if weight goes up enough, it also lends to lateral g loading to offset the traction.

He’s right in that it’s not linear, but the grip curve slowly flattens out, it doesn’t go down (unless the tire blows out).

For any tire there is an optimal weight to grip ratio, in that additional weight doesn’t add more grip as quickly. Maybe that’s what he’s trying to get across, although incorrectly shown on a graph.

But he starts the video by “Moving seat to the rear but get more front grip.” I think he does mean grip will drop if the weight exceeds some point.

But at the beginning of the video,he said " Moved the seat back, but got more front grip."

He didn’t actually get more “front grip”, he got relatively “less grip” in the rear because the extra weight started to make the rear tire twist.

Essentially, the extra weight in the rear exceeded the tire’s optimal amount of force it could deal with before it deforms past its normal gripping state.

Before setting the seat to the rear, the extra weight was put on the front tire which deforms the front tires and got “less grip” in the front. It sounds reasonable, too.

Two things about karting that make it a bit counter-intuitive if you’re used to (or reading about) car phsyics:

Karts are significantly “Over tired”. That’s to say they have a lot more grip potential from the tires compared to their weight\mass.

In karting, “Grip” is often conflated with rear load transfer\lifting of the rear wheel.

I confess, I haven’t watched the video yet, but I can’t resist a good weight distribution disscussion.

Why does more weight on the tire reduce the grip? Chassis Setup, Tires & Handling Forum

But at the beginning of the video,he said " Moved the seat back, but got more front grip."

I understand karts are their own animal when it come to vehicle physics, but some of this might still apply… I spent a alot of time working with some pretty savvy race engineers on big cars, and this topic came up a lot. I had one finally explain it to me in a way that made more sense. (This guy was annoyingly anal about fore/aft weight distribution, Indycar on ovals we would regularly make changes as small as 2 tenths of a percent front axle weight). Anyways, he explained to me that you have to look at it from the tire’s point of view. With less weight on the front end, the tire’s available grip has to overcome less mass to institute the chassis’ change in direction. This is overly simplistic, but it’s sorta, kinda like when you plop that big bag of dog chow underneath your shopping cart over front wheels, it gets harder to turn/ wants to go straight, take it off, it’s easier.

There is lots of nuance to this and one large caveat… For what I said above to be true, the chassis needs to be close to its weight distribution happy spot; usually the prescribed range from the manufacturer or your own numbers from testing. If you exceed that tuning window in either direction, you can have the exact opposite handling effect as to what you are after.

I’m new and still learning karts, but in my mind at least, some of this thinking might transfer. Love to hear others thoughts on it.

As far as tire/track interaction, goes, I think of it as a continuum ranging from
Essentially no traction (wheel off the track or sliding on ice)
to Interlock (the tire surface interlocking with the imperfections in the track surface
to Friction (a heavily loaded tire scrubbing across the track surface)

Anyway; bla, bla, bla. There is more (from a driver not engineer perspective) about traction, the 2D and 3D traction circle, etc. here.

How much deformation can a tire handle before traction begins to diminish? I’m guessing it’s simply a matter of how said deformation distorts the tread surface.

Sort of like rear engine Porsches. Lots of down force on rear tires, so lots of rear grip. Until the lateral force of the heavy engine overwhelms the lateral grip of the rear tires and, SURPRISE, snap oversteer!