Why no american f1 drivers? (Video)

Here’s a cool video where the author explains why there are so few f1 drivers in the USA. I guess it’s his opinion but it’s well articulated. Opinions from our readers who have been close to the big show?

I’m going to be a typical internet troll and not watch the video but will give my opinion anyway.

Our open-wheel ladder system naturally leads to Indy. It’s a big emotional/mental/financial commitment to leave this country, go across an ocean and live in Europe at a young age to get on their open-wheel ladder system. Their ladder system tends to chew up and spit out drivers who don’t have the financial backing or skill level to cut it. In a broad generalization, there are also cultural differences that leader drivers and teams to clash or rub each other slightly wrong too.

The same things can be applied to other countries that don’t have strong representation in F1. Japan for instance. Their ladder leads to Super Formula, or to where the manufacturers are. Toyota and Honda are much more focused on GT or sportscar racing than F1, minus Honda’s recent successes. We don’t have hardly any manufacturer representation across the pond. No major automotive corporations backing drivers in F1.

There’s no doubt that the skills necessary to drive an F1 at its peak are prevalent in the US, or throughout the world even. Just many barriers to entry, some of those barriers being taller if you aren’t living in Europe already.

And that was his point. The question he ultimately asked is, “Why should there be?”.
He discusses how development looks in Europe as opposed to here and goes into depth about how we zigged to NASCAR etc.
He does discuss the few Americans who did F1 and explains how their circumstances were different than most Americans.

He’s essentially correct. Jumping the pond & going to Europe at an early age - with sufficient finances in tow - would be the most realistic strategy to pursuing an F1 gig. Staying in the states won’t get it, as the specific competitive & business relationships don’t exist here. It’s the sobering truth, unfortunately. I’d like to see more American involvement in F1, but financial & business risk-v-reward analysis probably wouldn’t show it working for them, at least not in the relevant markets as they currently exist, current pandemic circumstances not withstanding.

It’s not lost on anyone here that karting is a big part of European racing culture, & plays a significant role in driver development there. And while the sport seems to be catching more interest here, it still hasn’t hit mainstream consciousness.

On a side note, I hope COTA survives this bad cycle. It’s a nice venue, & important for F1 here in the States.

I mean, Mario was born in Italy! The Beyond F1 podcast with Mario Andretti gives some insight into how Michael was shafted at Mclaren and Michael didn’t want to put up with it.

Just kidding in case anyone takes me seriously.

I’m half French so that makes me a great driver. Seat please.

Ive been to Italy. thats gotta count for something

Thanks for the post.
Here is another great article on the same subject.

More Americans than ever are competing in Europe; but is this traditional first step to Formula 1 necessary?

“It takes a while for the Americans to adjust to the nuances of driving with a lot of grip.”

I assume the Euro championship karting is Supernats type grip levels? The best young karter I know struggled with this at Summernats a while ago. It was new to him and his mechanic father and they placed alot lower than they would have liked. The rubber was nuts. 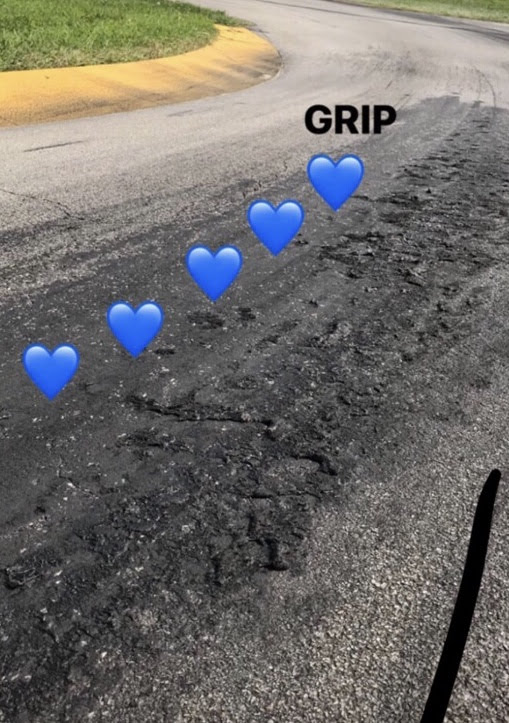 imagine that on a wet day

Generally a lot higher in Europe at top levels. But it depends on the track’s tendency to pickup rubber.

Driving and setup in those conditions is pretty interesting. Some people have the illusion that having more grip makes it “easier” to drive. I
Invite them to try conditions like this. Small mistakes can cost you ribs, not just time.

Jerry was telling me that he was pretty baffled by tuning for it. At the airport, he ended up having a long convo with another mechanic. Turns out, it was sorta counter-intuitive. I forget the details, but I think it boiled down to adding MORE grip or something.

SuperNats doesn’t have that much grip at all. Being a rough parking lot track that is used once a year, it doesn’t build rubber much.

I woulda thought with all those classes and heats, it would grip up. What are the grippy tracks, TJ?

I’ve been at euro races where they are actively scraping the rubber off at night, or you have to take a weird line because the rubber is so high that it “grabs” the chassis as you run over it. 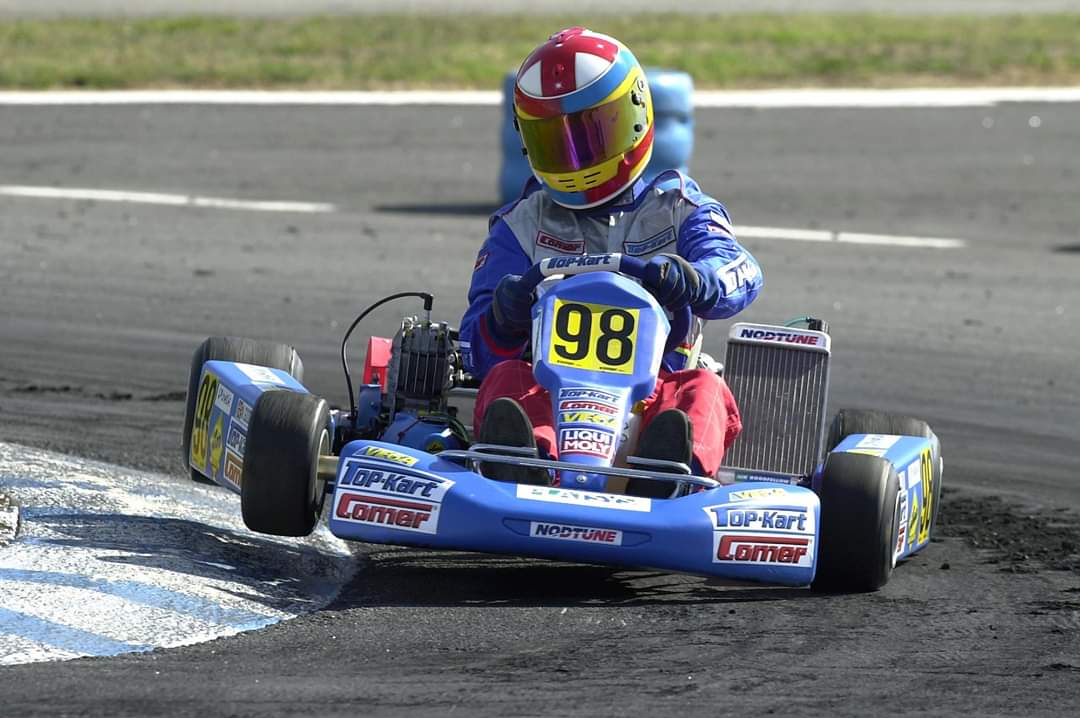 Or where the tarmac gets pulled up by the tires so they have to concrete it over night.

Like Nik and James said, there aren’t that many really truly grippy tracks here.

The tracks that build rubber the most are the ones where there is some kind of sealer or tar in the corners. So New Castle (like in that pic you posted) builds pretty good rubber in turns 2, 4, 5, 6, 7 and I-70, all places where there is sealer. But the rest of the corners don’t grip up that much.

The new section at Badger is all sealer, so the braking zone is like 10 feet long and karts bicycle there. That’s pretty grippy. Dallas is all sealer so that place is brutal when you get a big race there. That’s where I cracked my ribs at Pro Tour in 2014, just from the grip level.

South Bend’s first downhill corner has a bunch of sealer and it builds major rubber too. Here it is trying to eat one of my tires. Disregard my wonky bumper. 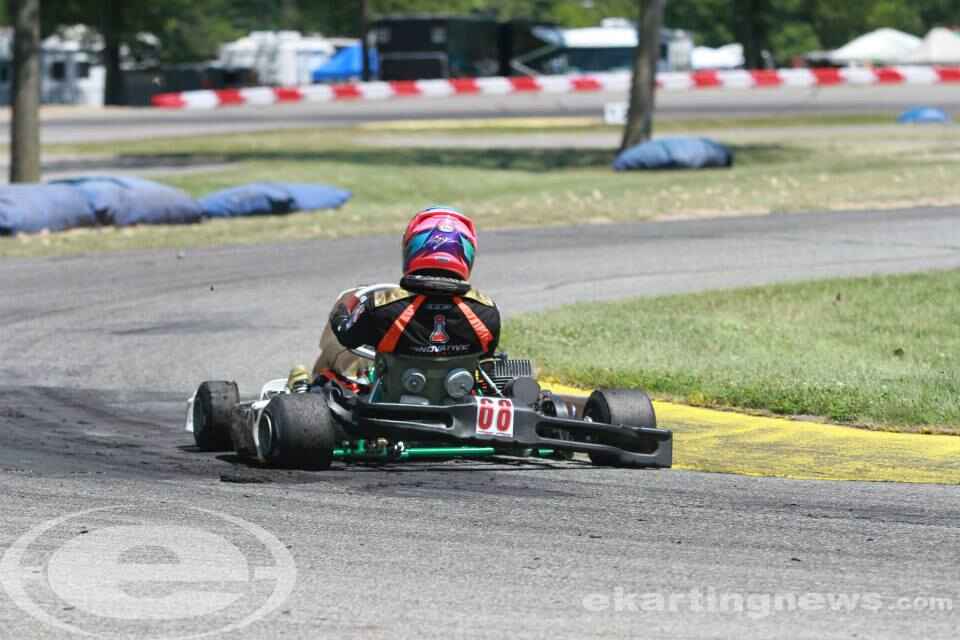 sidewall flex and squashing at the same time. Epic.
I could see that at DKC. It wasn’t gripped up when o was there but yah there’s sealer and there are spots that were pretty grippy whilst green.