So i found on an italian website free world wide shipping for the IAME x30 engine brand new including all components (new style pipe carb and airbox too) is $2240 euros shipped world wide which comes out to $2499 USD shipped vs almost $1000 more from local distributors in the US. Whats up with that? Why are the local distributors so much more even the rotax max comes out to about $800 less as well? That being said i have ordered stuff from this website before so i know it is legitimate. 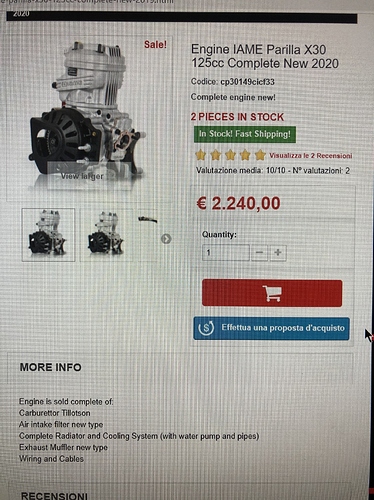 Hmm it’s 3195.00 pretty much everywhere in USA according to web. That does seem like an arbitrage of sorts. I suspect there’s more to it though.

Can you link that site please

Now i dont want to because it will be sold out lol. It is mondokart 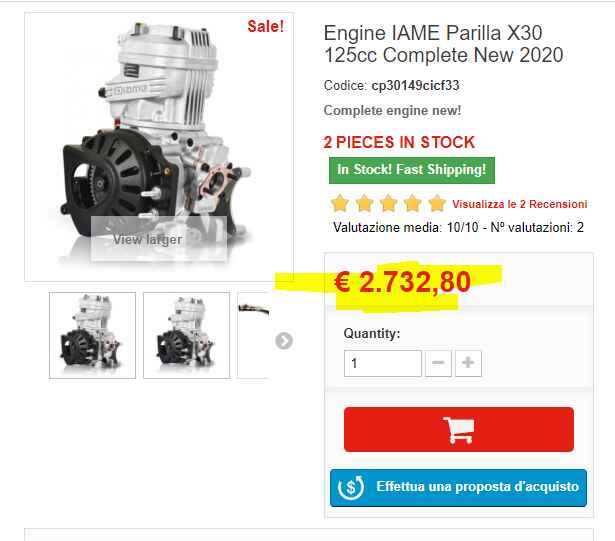 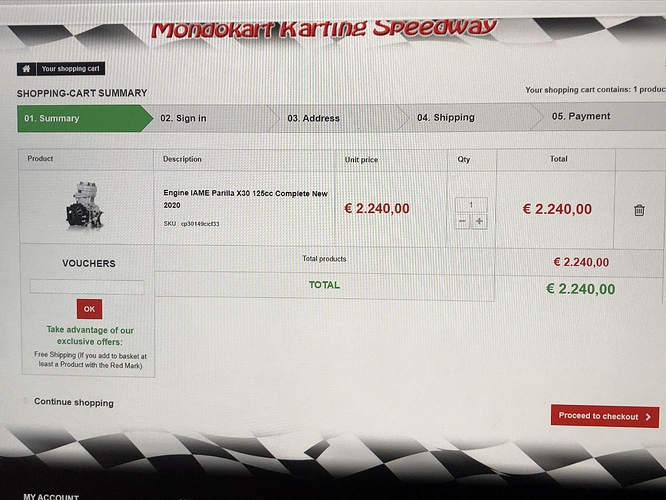 One of the things your not seeing is the import taxes for the feds an import taxes on state last engine I bought after paying fed taxes 3 years later I got a tax bill for close to 400 from the state of illinios. Also you have to have the importing board represented by an imissions representitive to prove that the engine is not for use on any streets is not to be tested for emmissions an isnt going to use fuel that is entitled to fuel tax. So what looks good may not always be the bottom line. Doesnt mean you cant just takes a little longer. Good luck

Diff price in USA than Europe for whatever reason. 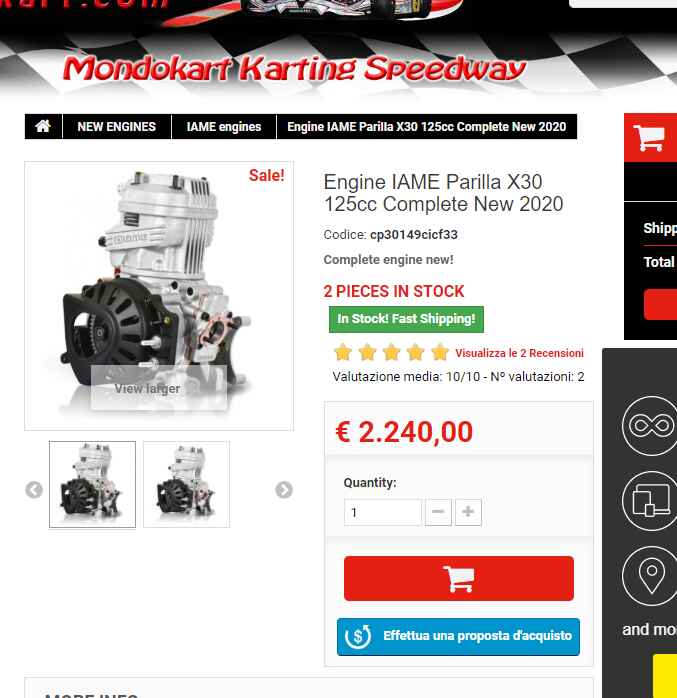 The cost in the UK is the same as USA prices and we have no import taxes because it’s still single market. The issue here is Mondokart, for whatever reason, are showing a much cheaper price to American IP addresses

They seem dirt cheap on a lot of stuff. Ordered a new birel steering wheel for 103 (225 here), free line tie rods for 25 for the complete assembly (76 here) and a ton of comer parts, carb was 40 (106 here) starter cover 45 (168 here). Most of the other smaller stuff is cheaper here. I hate to skip around the us based shops but to get some stuff for 1/3 of the cost I just did a big order.

Shipping is free on all engines. I bought hubs for $30 shipped… compared To $80 here

I bought one of these in Sept along with a chassis. I specified it was for the USA and they substituted the 2 piece exhaust and switched the carb to be a Tillotson ( over there the carb is by Tryton). Like a previous post mentioned there was some painful paperwork to do and I paid UPS to be my importer and some import taxes. In my case it was about $380 for the whole thing. Delivery was pretty slow due to this too, where Mondo usually delivers to the Atlanta area in 4-5 days this took a month.
Overall it worked for me.

They also sell a " Arai Helmet SK6 - NEW 2020! + Iridium Visor! PROMO!" but the picture is a CK6 and its only $550. Ive only seen an arai sk6 sell for less than $600 once which was on acceleration karting during black friday. People seem to be getting their orders so we might have just found a gem of a website

Motors bought outside of US distribution aren’t legal for use in IAME sanctioned events in the US. It’s not just the exhaust, it’s all the electronics as well (until next year, at least, then we will be on the same stuff as Europe). And of course stuff is cheaper in Europe…the market is much bigger, and there aren’t the import costs and hurdles to overcome. US distributors aren’t making a killing on engines. After import duties and after paypal or your credit card kills you on the currency exchange (usually 6% premium over the spot exchange rate), you aren’t saving that much on a motor you aren’t supposed to be using anyway.

Import fees, taxes, shipping, employees, building. Yes its a global market and I get it, but if you don’t support your local shop, track and people chances are you won’t have anywhere to spend the $800 you saved after they close. Also when you head to the track with your new engine please don’t be offended when a shop or team is not willing to help you.

Some of my thoughts…

That x30 would be a good deal for a practice motor. But probably not eligible for competition.

Having done import/export for electronics between Europe and US. You’re on the hook for customs. You might escape them, you might not.

I’d like to put it out there that they could help for a fee when and where it makes sense too. Win/Win.

Import fees, taxes, shipping, employees, building. Yes its a global market and I get it, but if you don’t support your local shop, track and people chances are you won’t have anywhere to spend the $800 you saved after they close. Also when you head to the track with your new engine please don’t be offended when a shop or team is not willing to help you.

This is a great point that many customers don’t seem to understand. Lots of people simply look to where the lowest price is. Then they can’t figure out why local shops don’t want to work on their stuff. Stuff they didn’t purchase from said shop.

Karting is a small industry. Loyalty and mutual support go a long way. Plus, half the reason we do this is for the friendly relationships we build along the way. If you aren’t willing to help support your local shop, it’s mind-boggling to me that you would think they would help you when you need it.

James brings up a good point of shops charging a fee for situations like this, but I’ve heard dozens of complaints from customers that a shop is “nickel and diming” them or whatever.

I guess my point is, if Local Kart Shop A is charging $10 more than the online store from Europe for your spindle you need, it may behoove you to buy that part locally, as you’ll earn that $10 back in emergency-tool-borrowing at the track, can-I-borrow-your-starter fees, and free beers at the end of the day.

And all this is why finding a Jerry White is so important if you are like me and can’t tell a carb from a hub. Personally I prefer to make sure the guy who’s tuning my kart eats well etc. If he’s gonna fix it, I’ll buy from him.