I have chatted with some of the local Racers and they have said the tuning and maintenance isn’t that much more than the world formula. I do understand it will be more expensive with it needing rebuilds relatively often and of course race fuel.

Would like to hear things I should consider in making the move. Is the learning curve much steeper? I’m not an expert tuner so hoping for minimal tuning. Anyone regret making the move?

Ultimately I’ll still keep my 4 strokes and still race on occasion as those will be priority.

What’s the power of WF? Lo is like 9hp I think?

Seems like going from Honda gx270 to gx390 sorta. The extra 5hp is very significant but it doesn’t drive differently. I’m curious to see what folks say.

Evan we have talked a little. But I have done my research. And have one whole test session on a 100cc. But I’m here to see what people say as well

One of the best guys I raced this year in KA jumped over to our class from 206 half way through the year and was immediately fast with very little test time. If you have the principals of karting down, my impression is the adaption should be very quick.

Setups are a little different, but you’ve got a 2-stroke OTK kart from RPG right? put the baseline setup in that thing, mount the KA and let it rip.

I apologize, I thought you were wondering about the switch from LO to WF.

The difference between my x30 driving and rental racing (4-stroke) is significant but I don’t think you need to adapt your driving exactly. It’s a different thing in that the lack of power and grip in 4 stroke makes you drive carefully. 2-stroke makes you feel like you can get away with being a bit more ragged because it feels so much more responsive. But, that’s just an illusion. Drive it like your WF. End of the day quiet tires and correctly timed inputs wins.

206 to KA shouldn’t be that tough if you’ve got the basics. Based on the coaching session we did Evan, I think you’d adapt quickly enough.

KA is about as fool-proof and straightforward as you can get for a 2-stroke. There’s a reason it’s so popular and my favorite engine package at the moment.

WF is 13-15 hp depending on regulations. Ive seen one make 18 but it was blueprinted

Its not relevant to the topic, but Ive been interested in some kind of coaching next season. Do you have a website or something where I can look at options or whatever?

A KA100 is faster than a WF, but not that much faster. Now if you want more, just put on two WF! 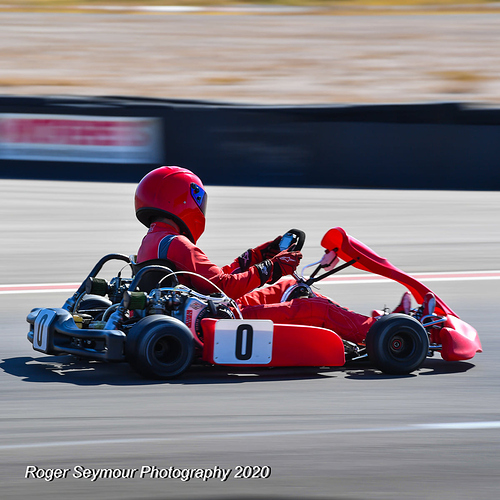 Glorious! Would love to hear what twin 4-strokes at sustained top end sounds and feels like.

Our machine wasn’t that glorious at top end - sound wise. We had the RLV mufflers pointed at the ground and they were between the bumper/tire/bearing change area. Probably the quietest kart on the track. Sounded kind like the Jetsons car going by! We have a couple more in process that will have RLV “Out the Back” pipes on them. Should sound a little more fun. Kart is just a little faster than most sit-up TAGs and just behind good shifters (Road Racing).

Oddly, I kind of like the sound of 4-stroke. Yah it’s quiet, relatively speaking, but still, it gets under your skin.

To be fair, the 4 stroke driver your talking about has a wealth of driving experience including TAG from years past.