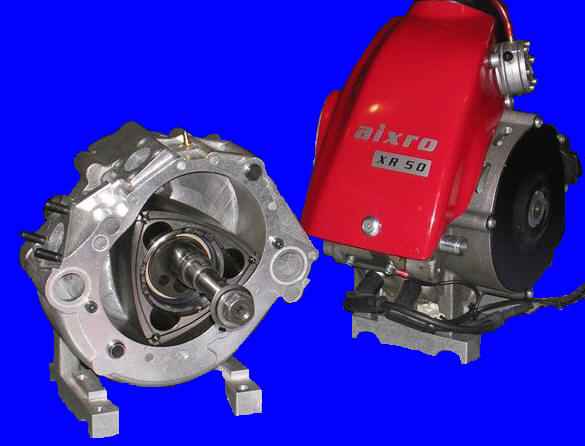 I have to admit, that looks like a great little engine, if a little expensive. Powerful, light weight, and good re-build interval. Plus I love rotary engines - they are just so smooth, especially compared to a single moto engine. However, it is listed as a 294cc engine, so I’d have to get the club (insurance) onboard first (same problem with another 298cc twin 4-stroke I’ve looked at). I’m not sure what they have against 4-strokes more than 250cc… as they allow a 350cc 2-stroke!

Anyhow, the manual states that it shouldn’t be run for more than 10 seconds at WOT though - not sure why. I’ve emailed tech support to ask. Possibly the clutch overheats - or maybe it just runs too hot even with good water cooling? Or possibly it’s just to keep people from buying it to run on the street?

I recall it’s not suitable due to some sort of door that cuts off lubrication to the bearings.

They are a fantastic engine though, it never really took off in the US other than UAS/outlaws where they ran them on methanol.

@Alan_Dove tested one a few years ago.

How long the engine will be OK at high rpm and full throttle depends on a variety of factors, so as Jurgen has pointed out there is no distinct time limit - you probably wouldn’t get one for a 2-stroke either. It depends on the rpm (one, but not the only reason for the rev limiter), bearing temperature, water temperature, lubrication and quite a number of other factors. In order to monitor the engine condition every engine has a M5 thread in the transfer port to accommodate a K-type temperature sensor (use a sensor with a small tip for quick reaction time, e.g. AIM EGT sensor). This sensor shows the temperature of the side port air that has just passed the main bearing, so at least you get a feeling of what’s going on inside the engine as it’s a very quick and good indicator of the current engine condition as well as potential issues that can lead to high temperatures (e.g. no oil in the fuel, no water in the cooling system, lean jetting, etc.).
Generally rotaries are known to die slowly, so if something should not be OK (e.g. the main rotor bearing gets too hot) you normally have time to react, i.e. have the engine checked. But it’s an engine, not a computer, so if you know something has happened don’t keep trying to start and run it to see if it gets better.

I’ve seen twin carb setups on these. Maybe you could get away with a very high percentage of oil running though one and a regular mix in the other. It’s be puky (and lean) on the low end, but maybe have enough lube from the first carb to stay alive.

Another option is methanol… I would say that would keep the temps in check.

One of these on a laydown would be mental.

That’s good to hear. To keep temperatures down I was also thinking alcohol. I’m not sure how all the seals would hold up though.

I timed the longest straight at one of the longer tracks and it’s 33 seconds of WOT in a 125 shifter, followed by about 5 seconds of part throttle through the corner, then back to WOT.

aren’t rotaries considered 2-strokes? since they fire once per combustion area per rotation?

I just consider them rotaries.

i just meant for the sake of insurance or rules - i think they fall under the rules for 2-strokes.

Yes, rotaries fire each combustion chamber once per rotation like a 2-stroke. They even inject oil into the combustion chamber (I premix mine at the race track). However, most still consider them 4-strokes. Insurance doesn’t care, and the rules seem to flex around which org is administering them and how much they want rotaries involved or not. Some double the displacement as if they were 2-storkes, some do not.

It’s only expensive if you haven’t driven it. Once you have, its no longer expensive.

Beware tho - this thing will will corrupt your soul.

I’ve only seen them on dirt, hence the wot for 10 seconds. It seemed like they were only wide open for 3-4 seconds on the straight away.

I’ve had 3 or 4 customers throughout the years with these things and it’s been sometime since I’ve seen or worked on one.

That said, if you pick one up, make sure you get all the sprockets you will need. The 428 sprockets for these are difficult to find and you’ll never find one trackside.

The early engines were notoriously hard on clutches, and although I believe it was fixed, I’d make sure you have whatever the updated clutch may have been.

Temperature, like all rotaries this things goal in life is to freeze the intake side and melt the exhaust side. You’ll likely never want for more power, but that power comes at a trade off, which is heat management. I remember seeing pictures of these things at night races with the headers glowing. Looked super cool. The not so cool part is if the engine overheats, you run the risk of warping apex seals, and those are rather expensive. If you stick the largest radiator you can on it, and don’t go crazy with the RPM (I recall they wanted to be under 12,000) You should be good.

There was two models at the time I dealt with them. One had an electric starter, the other one used an outboard. The outboard one was our personal favorite because the onboard starter often struggled to crank the engine. The solution was running an additional battery in series. So if the convenience isn’t a concern, the outboard is a less complex and lighter solution.

And the other issue with these things, was parts availability and pricing. It’s hard to promote an engine package in the US when it doesn’t have a race series it can run in, affordable parts, well understood technology by the users, or a distributor that’s familiar with the Karting industry.

What do u want to know ?

Welcome Andrew. I think his main question is how to set one up for long track racing.

Engine is really a short circuit engine , will only run for short max rpm bursts for about 10 seconds , it’s charge cooled by means of side plate induction at lower revs

Thank you for the information Andrew. That answers my question. I just wasn’t sure how simular it was to a Mazda rotary, something I am more familiar with as far as how they are cooled and lubricated.