Any tips regarding inputs or something else?

As the title says, do you guys have any tips regarding my inputs or something else related or not to the kart handling?

Oh… not a new set of tires. 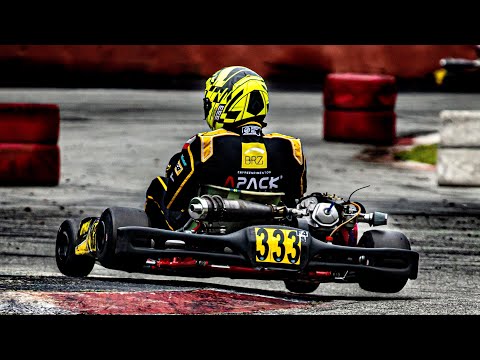 Just for settling some more context, I’m a tall driver 184cm and me and the kart together weights 183kg as class rules demands.

So due to my arms length I hold the steering wheel slightly above the middle and and sometimes at the middle of it otherwise my elbow continually hits the engine leaving me with a lot of bruises lol.

Is this killing my performance in any way?

Well that’s it, thanks in advance!!!

It’s not necessarily due to your hand position specifically, but I would say you’re often making too harsh of steering inputs and upsetting the kart.

One exercise that I use with my drivers a lot is having them move their hands higher on the wheel. This reduces your leverage and makes it more difficult to make big aggressive inputs, smoothing out your driving.

I’ll definitely try this exercise in my next training session. Thanks!!

I’d offer that something seems amiss in the complex that occurs at around 10s in. There is a big lift and timing wise, it feels off. This seems to drop your minimum speed way down and the engine has to spool back up.

What track is it? I’d be curious to see some lines on vid.

The kart track is in Brazil. “Kartodromo Ayrton Senna”

Man you guys race each other hard in Brazil! I was looking at some rental races online to see that turn and haven’t found anything useful yet, mainly folks trying to murder each other in rental karts. Looks like a good track, though. I am guessing there’s some race series that come through here? There has got to be some footage from a fast driver.

It does seem like that quick chicane requires a whole bunch of speed reduction but I am wondering if there’s an earlier throttle on exit than I am seeing in these vids.

O guess it’s possible to go for an early throttle on the chicane but the kart is not yet ready I feel… kinda like it will mess the balance if I do so. Maybe a setup change would help, but I don’t know. I’ll hit the track tomorrow and produce some more footage with some setup changes. Thanks for the help.

Judging based on watching ryan norberg, you have too much input during and after corners. Not a lot, but just a touch more sawing than he does. He tends to do one input, than hold the wheel nearly straight, with tiny corrections. The double apex turn is the only one that doesnt look ideal. It looked like you had a second turn in to hit the late apex, whereas what I would think you should do is have a smooth arc all the way around.
Looks great otherwise, using all the track and kerbs, etc.
Just my 2 cents, take with a grain of salt, I only have 3 years of experience in club racing

Yeah it did seem to me that there are too many inputs through that chicane both steering and feet.

Why is the left hand always letting go of the steering wheel? It looks like there is very little grip.

Thanks for the tips!!! Yeah those small corrections really show up when watching the video, I don’t accurately perceive them on the fly… I’m working hard on moving my hands up on the steering wheel as some other here have appointed. This may help with these issues. Today I I’ve change the settings a little and found it to handle the kart better. Anyway, thanks again for your time

Hey! My left hand is letting go of the steering wheel in order to get my helmet on its right place. I’m using a GoPro attached on top of the helmet and this wind proof case is a little bit heavier than the regular one so it keeps pushing my helmet up and my left hand pulls it down lol. A small inconvenience for the sake of footage analysis.

I am curious, what is the antenna at front of kart for?

At around 2:45 in the second video you posted, the chicane seems a bit different in execution. Seems to me you roll more speed into the first bit and then lift, turn, gas it out. Seems calmer.

It kind of feels like the left and right are far enough apart to make it require some throttle between them… too far to lift, roll, and get back on.

But that throttle can screw up the exit timing. Feels like the need to keep minimum speed up can introduce inputs that make getting a good exit harder.

I am not really sure what is correct here. I can’t wrap my head around this turn without feeling it. It could be that you are doing this fine and I’m just plain wrong. I just don’t like seeing what appears to be slower exit than entry. Not sure if one has to back off the entry a bunch here, wether that would even help. But my guess is something subtle would change things.

@speedcraft can you take a look at the quick chicane and tell me if I am barking up the wrong tree.

No worries! I’m never able to hold those thoughts in my head when I’m in the kart. I should really figure out a way to get a video to see how smooth my hands are

Hey! About the antenna: here in Brazil kite lines are a problem. Some kids put products on the lines to make them sharper. Anyway, a lot of people have already died with their throats cut

That chicane is really tricky, in my perception (and others locals too) is better to give a quick entry and compromise the exit due to the next straight is kinda short. The thing is I never really felt confident going around it. In my mind I’m always trying to start the throttle in a way that the rear gets stable, but watching the video seems like I’m waiting for too long.

Hey! About the antenna: here in Brazil kite lines are a problem. Some kids put products on the lines to make them sharper. Anyway, a lot of people have already died with their throats cut

(and others locals too) is better to give a quick entry and compromise the exit due to the next straight is kinda short.

Yeah it seems like the turn itself is somewhat compromised in its layout. It could be that there just isn’t a fast, traditional approach. I’d come try but it’s far and I don’t wish to be murdered by kite kids. I figured the aerials were some sort of timing device. I hope that problem gets sorted for you guys. Is this a recent issue?

@FSarkis, I’ve got some questions for you:

We can double up the antennas for you lol

But yeah it’s sad and not nearly a recent issue we are talking about 20 years of antennas being attached to bikes and all.

Just to be clear, not all tracks requires the use of it, Interlagos do so due to the proximity of some communities called “favelas”…

Another note after watching the second video… It sounds like you’re making a lot of erratic throttle inputs each corner as well. It’s important to remember that the kart will react to whatever you give it. So stabbing the throttle multiple times a corner is going to cause the kart to load and unload and make it unstable at the limit.

In most cases, we want to be limiting ourselves to one brake input, one steering input, and one throttle input per corner to eliminate as much of that load and unload as possible. We want to keep the kart on the limit of traction through the corner so we are using all the grip available to go as fast as possible and keep the kart stable and predictable. Multiple inputs is an inefficient use of grip and causes many drivers to misdiagnose the kart’s handling, thinking there needs to be a chassis adjustment, when in reality the kart is just reacting to the driver’s erratic inputs.

Hello there! First of I found your website a few months ago and became a fan of your work congrats!

A: This is my second year in karting but my first with my own equipment (used to race indoor/rentals karts with low hp).

IMO Doing great so far considering the level/experience of other drivers and the championship. So far P14 out of 28 on championship stands with two rounds to go.

Yesterday I started to practice the new hand position, but the track was in a different layout so impossible to compare the lap times, but considering the feelings on same corners I believe that it helped a lot on smoothness over aggression inputs.

Same kart setup by the way.

A: Pretty much a mix of those things:

Reviewing the videos I started to question myself if I was holding the steering wheel properly considering the tiny little movements entering and mid corner.
———————

Ps.
By being a rookie sometimes I feel that asking a lot about feedback to teammates or crew members will look like I’m being insecure and therefore weak. I know it’s silly but it’s better to hear a rough but honest feedback than “looks really good keep going“ as I’ve been told before.