Anybody here got a project car or truck?

As I mentioned previously, as a kid, I worked in a paint shop where we painted small aircraft and the occasional helicopter. Fast forward a few decades, and I have a few cousins who are deep into the Military Vehicle Historical Society. So I do a few paint and body jobs for family. Always liked the old flat fender Willys, especially being a patriotic combet vet myself.

Fastforward a few military jeep projects and I asked one of my cousins to “keep an eye out” for a flat fender jeep. He asked me if I preferred military or civilian, I told him I have no preference so long as its clean.

Few months later he hit me up and said he found a cililian Willys, but it appears to have a military motor. I like qwarky stuff so I said I’m game.

Ended up with an $1,800 project jeep, that sat for almost 30 years in a barn. It was for the most part unmolested, but the rats had there way with this thing so the wiring was almost 100% gone. It was a west coast jeep, so the rust was minimal and bubba never got ahold of it so it was completely stock.

A deeper dive into this project turned out to be one in million. So in the WW2 Willys Jeep community, everyone knows both Willys and Ford were drafted into the war effort. With over a million Jeeps produced, it was about a 60/40 split. Willys made 60% whereas Ford made about 40% of all the jeeps produced during WW2. The Ford’s offer a slight “premium” because there were less produced. To the naked eye they look identical (Willys vs. Ford) although there are slight differences. All I knew was the serial numbers.

So the engine in my civilian jeep (CJ2A) was a military motor, but I had no idea what type of military motor it was. Was is Willys or Ford? Only a closer inspection of the serial number stamped on the block would tell me what it was.

It was a Ford motor (thats cool) but it turned out to be far more rare. Serial number started with GPA-123.

Durring WW2 there were about a million Jeeps made between Willys and Ford. But my engine was stamped GPA . . . WTF is that.

During WW2 Ford produced about 12,000 Amphibious Jeeps. They weren’t very “sea worthy” so most of them sank. Those that didn’t made there way into private collectors or museums.

So my little budget civilian jeep somehow ended up getting an Amphibious motor swapped into it at some point in time. Motor alone is valued at $30,000 plus, maybe more if the numbers matching Amphibious Jeep is still around somewhere. 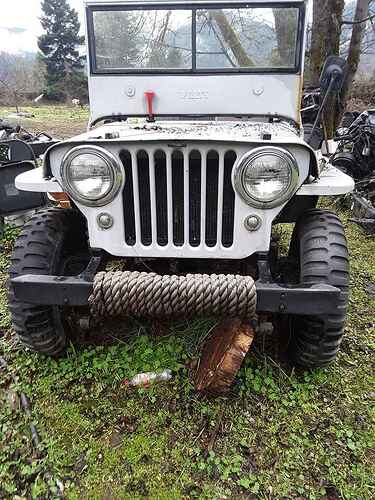 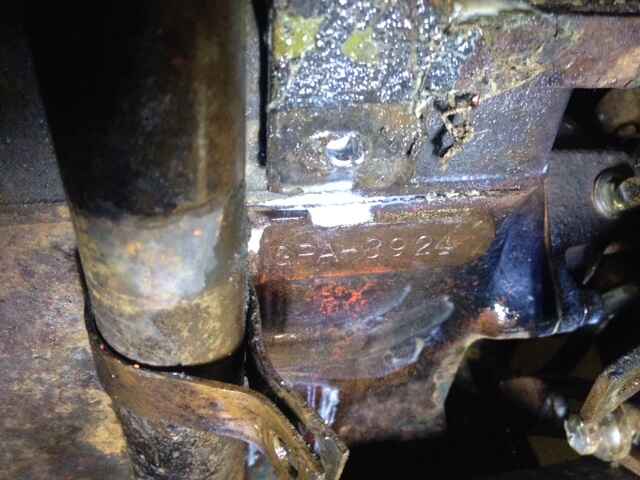 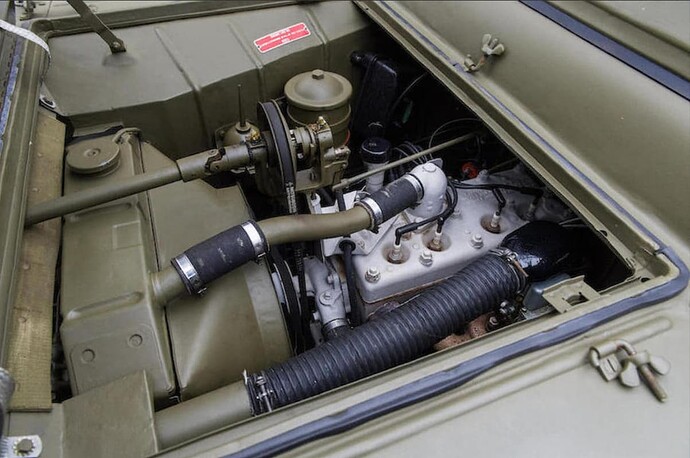 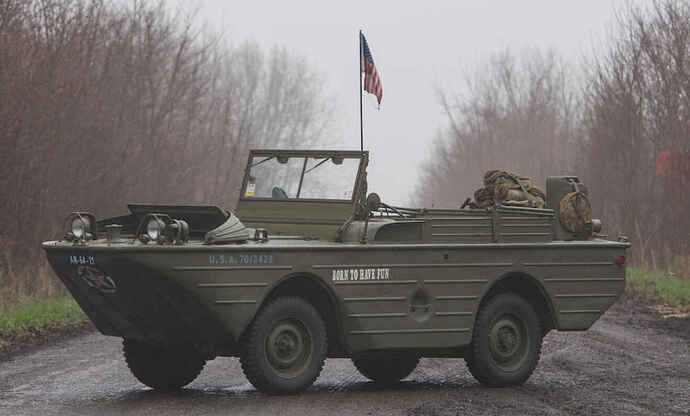 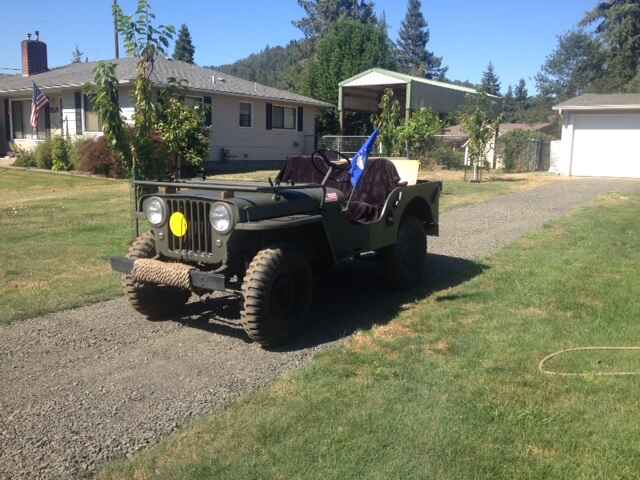 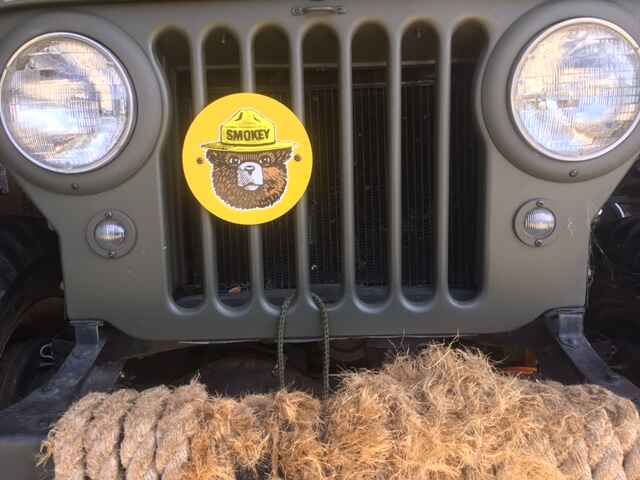 I tinker on my van and my Volkswagen Golf R, no room or time or money for a project right now, but I would love to have one.

During WW2 Ford produced about 12,000 Amphibious Jeeps. They weren’t very “sea worthy” so most of them sank.

We’re the Chevys any better?

Yeah I have one and I think it’s pissed I spend all my time in the garage working on karts instead these days! I realized the other day that I’ve accumulated a bin of parts for the car that are gathering dust. I need to force myself into some winter projects.

Dad has a beast of a car. If he lets you drive it eventually be very mature about things.

Braking distance, while great for a “car” is about 100ft at 60mph at best (standing on em). When I first gave mine the beans I was surprised at how long it took to stop (compared to our kart racing).

He’s got the ceramics but still. Cars are different. Track it eventually! (Or send him to the Porsche school and track theirs).

If your objective it to get parents hooked on this as well, Porsche Europe does a ton of cool things for casuals-advanced.

Here’s a leap off point:

From the basic principles of safety to an advanced sports driver. With numerous training offers.

For just the joy of driving in lovely places:

Make travel dreams come true that have been on your bucket list for years.

And here: COAL: Moving On From The 240D | Curbside Classic

I actually got rid of it to free up time and money for karting!

My dad is acually a former race driver. He did all the learning and schools you possibly learn and he is pretty good. But i thik im gonna ned some training​:grinning:

Aha! That makes this easier then! He’s already a racing nut.

Honestly, the Porsche stuff mostly isn’t for younger folks. All the things I went to with them, unsurprisingly, were loaded with old dudes who were there for fun (my noob self included) etc. not really a place to learn racing but a very, very nice experience (kinda luxury). While I was there one of the guys attending took delivery of his 918, for example. Racing school wise, Lucas Oil was way more useful from a racing track time perspective. Porsche was classy and luxurious (which to me isn’t really the heart of racing but is nice to visit).

Had great instructors. Pippa Mann was teaching when I was there. Here she is with her Indy car: 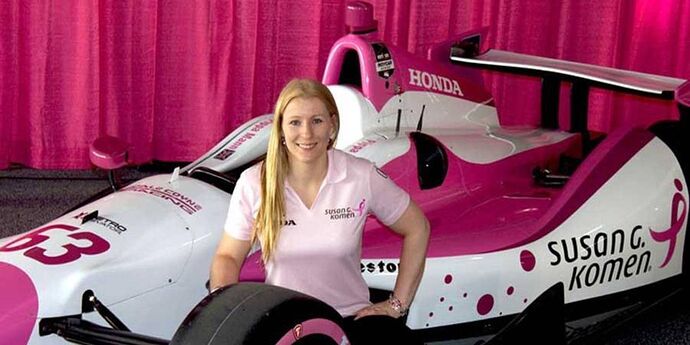 I don’t now but I did. ‘79 CJ Ebay $700 buy, 4 years ground up resto, YJ tub swap. Painted it with British Airways Red two pack UV resistant high solids polyurethane airplane paint. Pacer wheels came from Los Angeles behind my buddy’s seat in the flight deck of the 747 he was flying 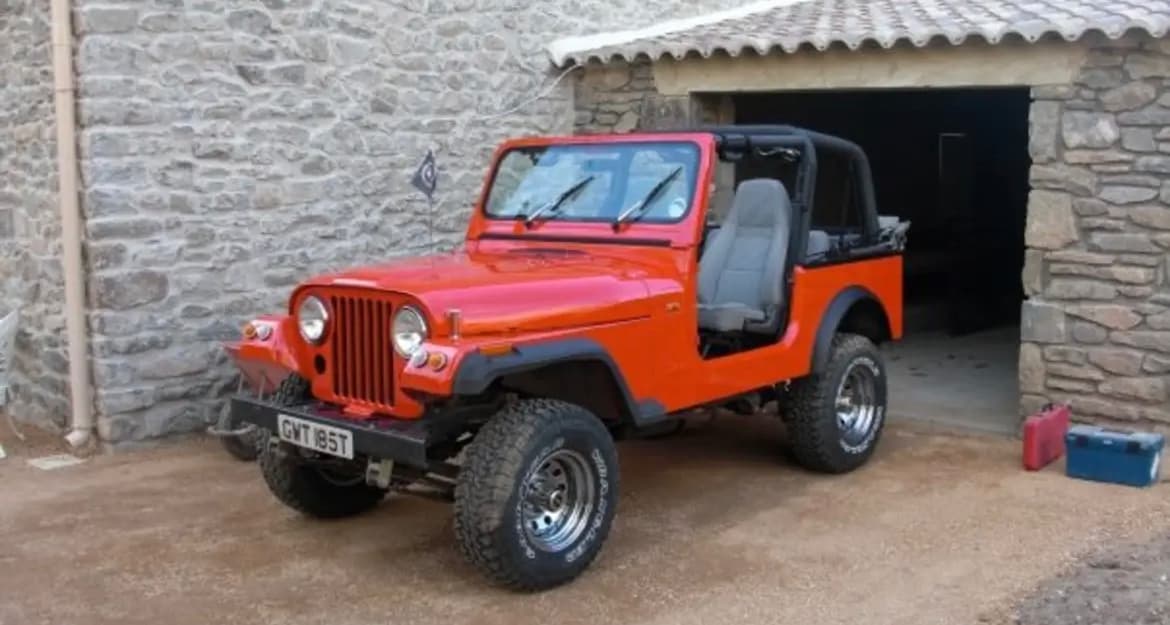 we have a couple toys that are lightly modified but I’m not sure I’d call them project cars. The GT3 however was a constantly evolving project form the time I bought it in 2011 until we started karting in 2018. It’s been stagnant since.

The car started life as a 2004 GT3 but is basically a cup car with an interior at this point. I’m sure I’ll forget half of what’s done to it but at a high level:

of the 40,000 miles on the clock this car has over 20k track miles on it and has been as reliable as one could hope for all of that track time. 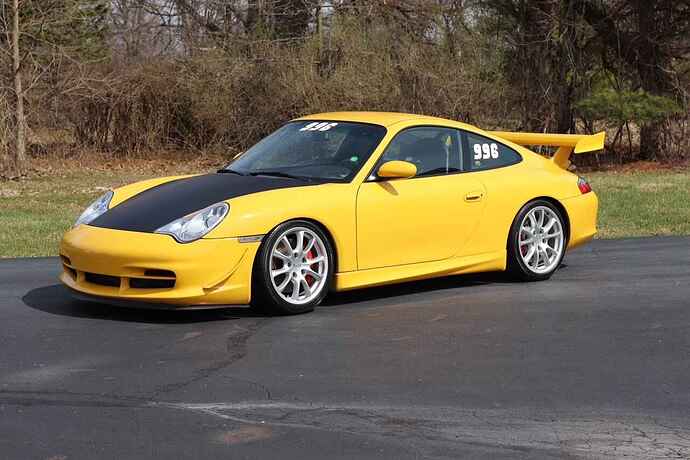 I want this. I had hoped a long time ago to do the Porsche cup car at their school but they shut that down after the race cars kept getting damaged or something. It was pretty expensive, too.

My favorite of the cars we did drive (911, Boxster, gt4, gt3, cayman, panamera, turbo S) on the track (at my skill level then which was zero) was hands down, the Boxster. Gosh that is a fun track car. It’s so balanced and easy to drive, perfect for noob me.

I imagine you, Top Gear style, launching this off the back of a dune.

My daily cars are projects due to age and deferred maintenance 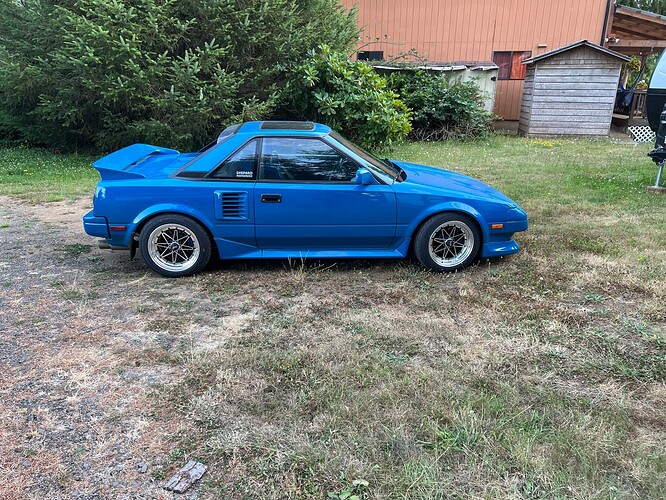 I’ve been working on this 86 Toyota MR2 now for 11 years. Finally have it reliably driving, last major step will be swapping out the aging supercharger parts for a turbo.

For a lot of it I’ve been trying to keep things mid 90s style as far as mods go, but I’ve taken an exception or two. I chose Laguna Seca Blue for the paint because I have a thing for M3s but since I’m a mechanic by trade I don’t actually want to have to work on it.

Power comes from a 92 Corolla Supercharged 1.6 with a bigger crank pulley for higher boost, air-to-water intercooler, and Megasquirt 2 ECU. It was my autocross engine In a different car so we were doing things as we had to tear it down so it also got Formula Atlantic spec valves. Also has a factory Corolla helical differential. 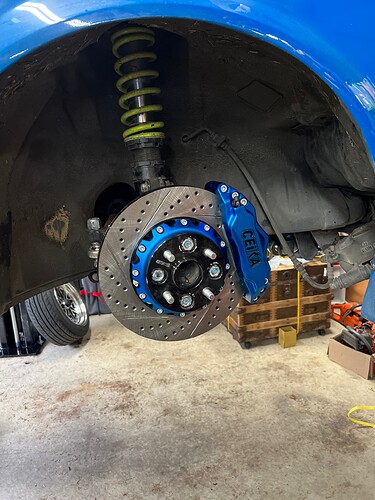 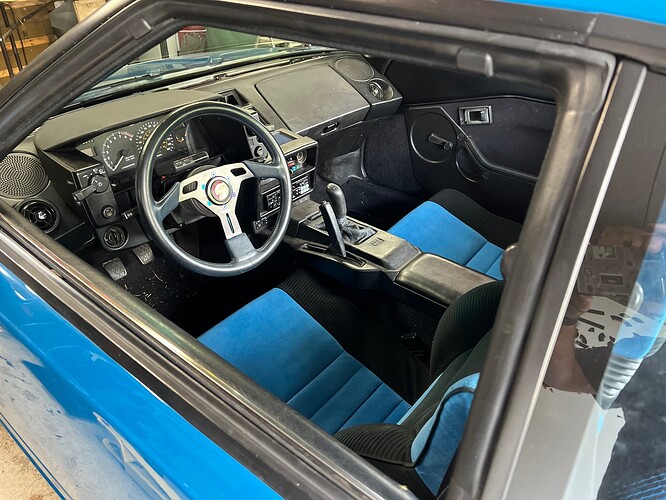 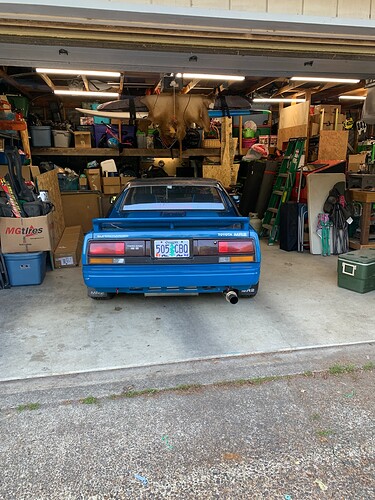 I think my favorite part of the car however is the early 90s Alpine tape deck which I replaced the tape section with a Bluetooth receiver. 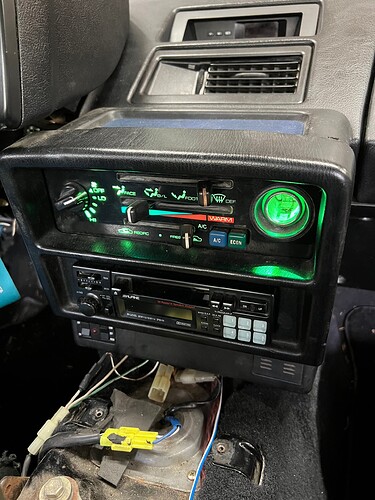 And because it’s necessary, a before picture: 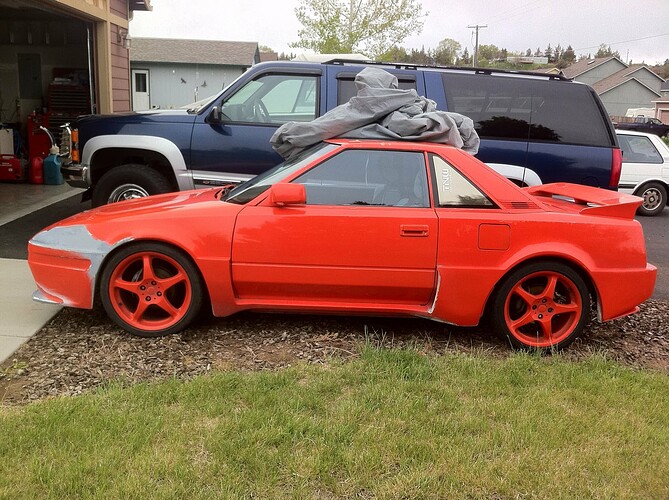 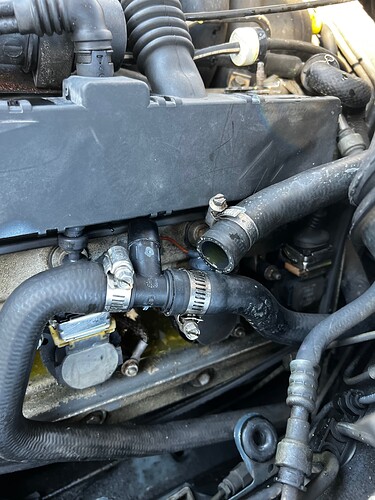 Screwdriver and 1.5 gal of coolant later it’s good to go

I love the AW11. The styling is so perfect for the era. I would love to own one. You really nailed it! Looks awesome.

Lovely! A big improvement for sure. The Alpine makes me think back to when they seemed to be the coolest, the 1980s: 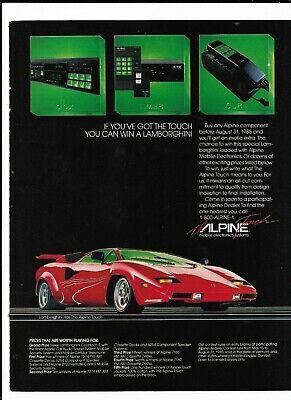 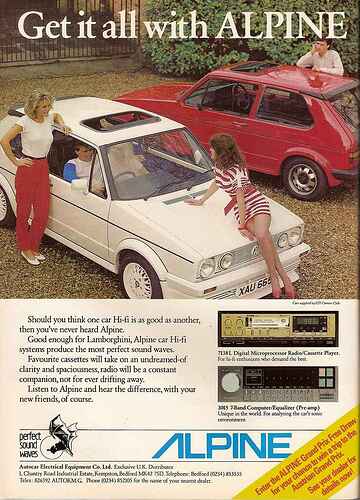 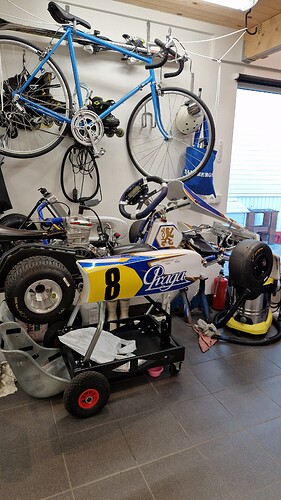 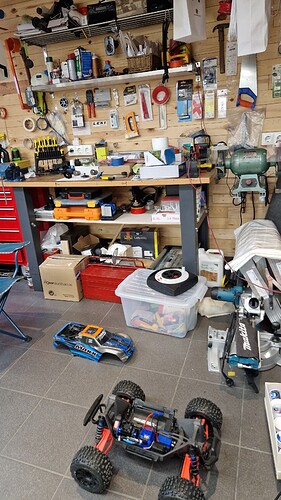 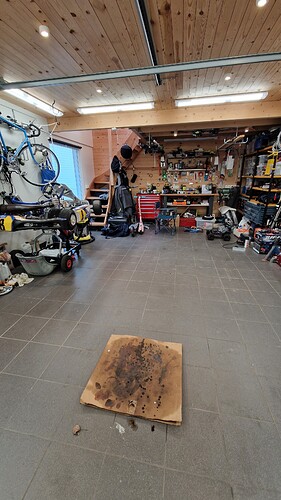