would appreciate what you guys think. Mainly applicable to UK regs here, but may be elsewhere as chassis regs tend to be very similar worldwide

Does the rules define what consists of the chassis?

Is it just this part alone (frame?) 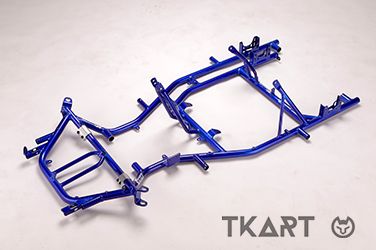 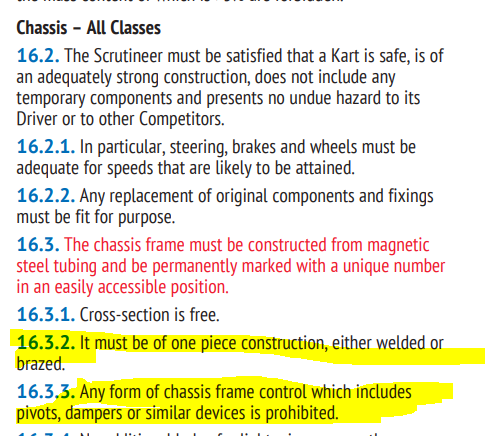 In my view this prohibits any kind of torsion bar.

Wouldn’t the torsion bar just be a ‘mechanical component’ which is built up around the chassis? It isn’t a kinematic element/pivot/damper. How would it be different than the axle in terms of being a tube bolted to the frame other than the fact that it doesn’t have another fuction (ie transmitting drive)

It does sound like it. Particularly that TKM specifically addressed it. Since the torsion bar is specific to changing the karts handling, it sounds like it’s against the spirit of the rule. But, since everyone runs them, perhaps the answer is for them to specifically address exceptions?

My Take: It IS a one piece construction, but you can add to it.

Axles are specifically mandated for in the regulations. Torsion bars are not.

Gentlemen, the bars in a kart chassis are NOT torsion bars, they are stiffness bars. That’s completely different.

That’s true, but its the vernacular found in regulations.

What if it has my sponsors stickers on it. Then it’s cosmetic?

What if I have the bar in to strengthen the kart and keep it from bending in impacts?

This is a fun topic.

The rules state everything needs to welded. If it strengthens the chassis… it’s technically chassis frame control… and/or part of the chassis itself.

So as long as I weld it in I’m good?
Welder for the dry
Angle grinder for the wet

The chassis the suspension, isn’t every adjustment on the kart for “chassis frame control”? What about ride heights or caster pills?

16.1.1. Modification, addition, variation or tuning other than
specifically permitted in these Regulations is prohibited. IF IN
DOUBT . . . DON’T. Anyone requiring clarification or definitions
concerning the Technical Content of these Regulations should
apply in writing to Motorsport UK.

Ride Heights and castor pills are mandated for within the regs… I’ll need to take a closer look.

That’s true, but its the vernacular found in regulations.

Or’ you could be Mario winning the F1 world championship when he adjusted the sway bars from corner to corner. Amazing that was.

I doubt if Formula TKM’s requirement to weld in or remove the ‘stiffening bars’ has much to do with their view of the ’ legality’ of same.

Formula TKM is our (UK) least expensive 2 stroke class and TKM have a long history of making some attempt to keep costs down. Harder tyres, 2 bearing 30 mm axles , listed chassis , no caster camber adjustment have all been in the regs. at some time since the class was introduced as 100UK mid 1980s. Welded in or removed bars is only an extension of this imo. commendable approach.

I can’t see that a clamped in bar is similar to a pivot or damper but these are only included amongst other possible forms of ‘chassis control.’

There was a chassis (LRG?) which had the tube passing backwards and inwards from the spindle yoke to the main side tube welded to a sleeve which could turn on the side tube, pretty definitely a pivot ,which raised some comment at the time but from memory wasn’t banned.

Mostof the chassis concerned have been subject to FIA/CIK homologation and presumably comply with their rule book. Perhaps MSUK are ’ behind the times’.