What exactly makes a blueprint engine blueprinted. What gets done to it, and can it be done later down the line on a stock engine say after/ during a rebuild.

It’s a very subjective term. What class are you referring to?

Generally speaking, mass production can sometimes produce parts that are within allowable tolerances, but outside the more ideal parameters for best performance. So, a crank that’s within tolerance may not necessarily be optimally balanced, & blueprinting can correct this. Fine honing a cylinder to more “perfect” round & matching it to a dimensionally closer piston is another example. It’s all about improving performance.

So, a crank that’s within tolerance but may not necessarily be optimally balanced, & blueprinting can correct this.

Rotax (X30 and KA too) regulations generally state this

“The engine must be raced in standard form as manufactured and supplied by Rotax unless otherwise
stated. Filing, grinding, polishing, surface treating, machining or lightening of any component is
forbidden unless otherwise stated. The addition of material to any component is not allowed unless
otherwise stated. All parts used in or on this engine must be of original manufacture or source as
supplied by Rotax except where expressly allowed.”

Does this not limit the potential of any kind of extensive blueprinting? Sure you can match some parts, but you are limited in scope.

As James alluded to it’s a subjective term and very controversial int he engine building world. I am not an engine builder, but my assumption is these spec engines generally can’t really be blue printed (in the traditional sense). I recall a TKM engine builder getting banned for what he considered ‘blueprinting’. It was technically illegal but he wasn’t tuning the engines.

To the latter part of your question on of blueprinting can be done later, the answer is yes.

Also, you’ll be glad to know the the KA100 and x30 are pretty damn good out of the box.

Engines from older manufacturing processes like the Yamaha KT100 however needed significant work to being them up to speed.

As Spencer noted, blueprinting generally refers to a builder honing or machining parts of the engine (where allowable) to bring them into the optimal legal spec as defined by the rules, by getting rid of manufacturing variances.

As noted, there isn’t a ton to gain in KA or X30 by blueprinting, as tolerances are pretty good from the factory, but certainly there is some to be gained there. Probably not totally necessary if you aren’t running national-level stuff. A lot has changed since 2017 when KA was first introduced here, but I’ve mentioned that I ran a stock KA at the national level and was on the podium multiple times with it. So it wasn’t completely necessary then. But I’m sure builders have found new areas to play with in the last 5 years.

On this subject…might a tuner that sells new motors also be cherry-picking based on an initial run on the dyno? Even though the new motors have tight tolerances I am sure there are some that are better than others.

Yes. In Rotax, and it’s starting to happen again here int he UK due to popularity rise, teams will buy in a ton of motors and mix and match. In X30 similar things happened. The difference in parity between X30 partly started the wave of drivers back to Rotax… and the cycle began again.

Are blue printed engines already broken in during the blue printing process?

Technically, blue printing and breaking-in/dyno-validating are two different things. However, any engine builder who is not doing both is not doing their job.

I was thinking about that NOS blue printed X-30 I picked up from Ocala Grand Prix before they shuttered their doors. Hour meter read zero so that’s why I was curious. 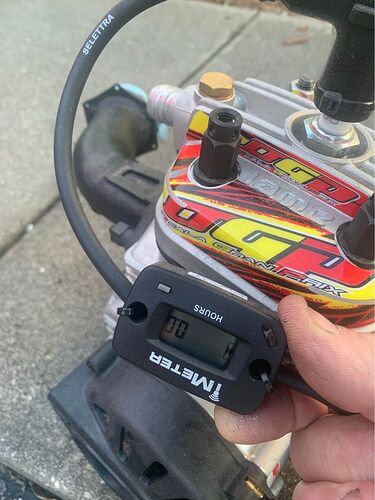 Pull the spark plug and see if it has run at all. Probably has.

We don’t put the hour meter on til after break in. I don’t need customers questioning “did you go too long? Not long enough?”

We don’t put the hour meter on til after break in.

Comet does the same. Mine came back from being rebuilt and the timer was at 0:00, but it had obviously been broken in on the dyno.

Thanks guys, like I said, I got this engine a year ago but its just been in the gun safe till I decide when I want to pull the 206 off and start playing in 2 stroke. But I am very naive in all things 2 stroke.

The use of time as a maintenence interval parameter is sort of a curious choice, as fuel usage is probably a more accurate metric since it accounts for both run time & the inertial load on the engine.

More accurate metric, but a metric that is more of a pain in the arse to record.

Maybe someone should market a small fuel flow totalizer that could be installed inline.

Probably be hard to do one that wouldn’t mess with the fuel flow too much.

I’ve brainstormed this a few times but never really saw anything that would work. Could be my lack of knowledge in the area though.

EFI could do it