I love the thrill of racing and especially love being able to relive the energy of those great moments. I wanted to share and hear from others about the best equipment and techniques you use to capture those moments on film.

I’ve always got my iPhone with me and recently invested in a low cost gimbal for it. Really helps to smooth out the shots of the karts traveling past, also helps keep the iphone slow motion shots crystal clear. I purchased the SIGHT2 X-Cam gimbal after a stack of research as it is only a 2-axis gimbal which allows me to pan quickly without having any lag and missing the kart as it travels past. I’ll upload the video later.

on the kart itself I settled on purchasing an action camera from the Garmin Virb family over the GoPro series as it has built in lap-timers, GPS, elevation and a whole bunch of other overlay features built right into the camera and software. I have the Virb Elite but will likely eventually upgrade to the Virb XE or whatever comes next. Main issue i’ve had is with excessive vibrations which i’m still trying to improve. May attempt to build a mount using an external gimbal to help. Here is an example of the overlays I’ve selected to go with the footage. My First Race at SIC Shanghai

I’d love to see some screenshots and images of your gear and how you’re using it.

I mean to be frank, I just have a GoPro on the nose of my kart, so I’d love to see what people who put in a more concentrated effort come up with.

Hell, this is a good opportunity for someone to make a little video about how they record kart video.

If you’re wondering what a gimbal is…

I need to get some pictures, but I have one GoPro on the nose and two on the radiator (forward and rear facing). All three are synced via GoPro remote strapped to my steering wheel. I then put it all together with data in RaceRender 3

I have some stuff with race render knocking around too. I eventually figured out how to parse the HR data from my Garmin 305 and was going to overlay that too… But alas I never had a session that had data from all three sources at the same time, 305, gopro and mychron. 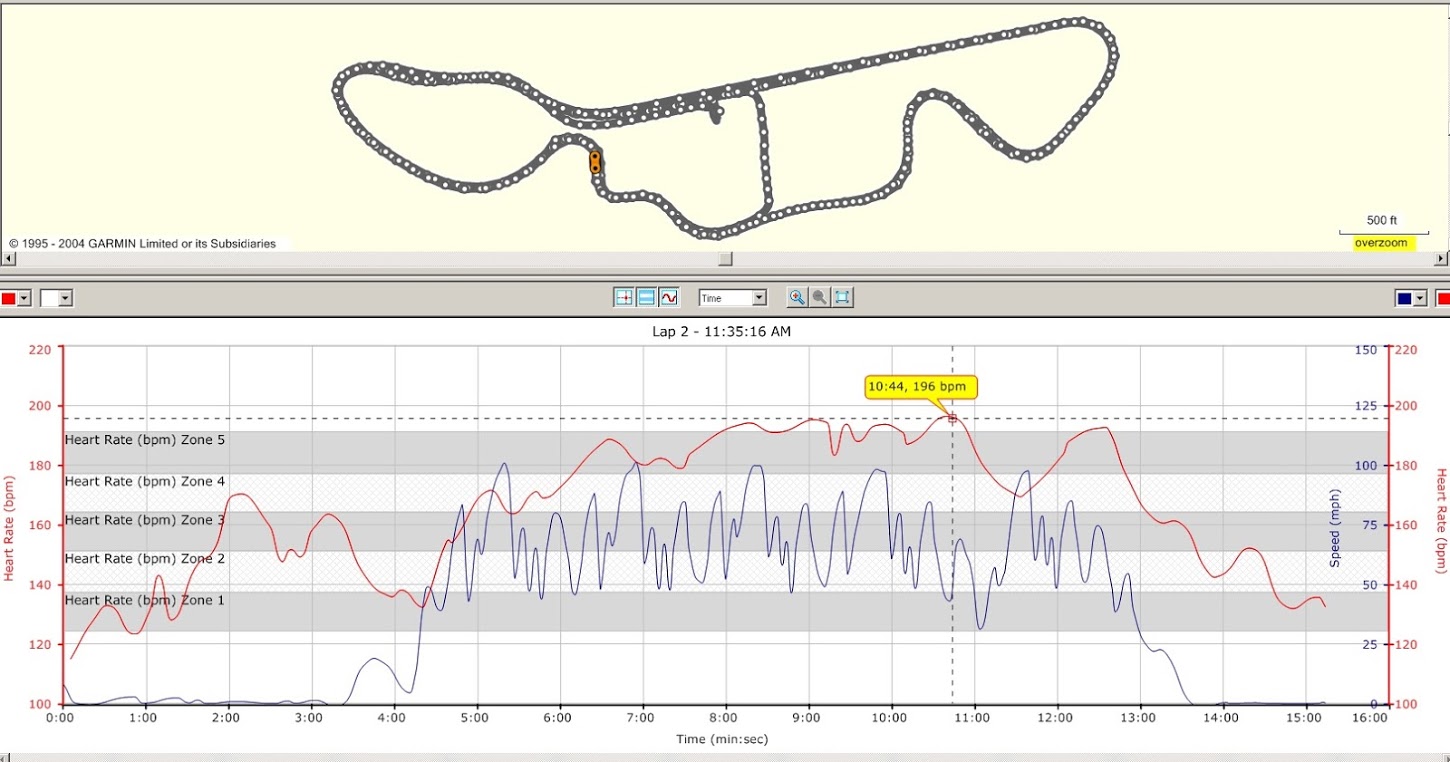 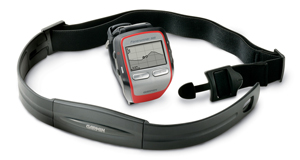 Did you find it helpful? I don’t think there’s such a thing as a best camera position perse. JMHO

I liked his thoughts on the perspective for the front facing cameras, his anecdotes about mounting locations and having the cameras come off while on track. It made me think about how and where to mount unconventional views and how to secure or tether them as to not lose them.

I’ve used a GoPro chesty mount for my last race, since we have a no helmet cam policy. It came out pretty cool! Once I have the footage uploaded I’ll post some videos here. 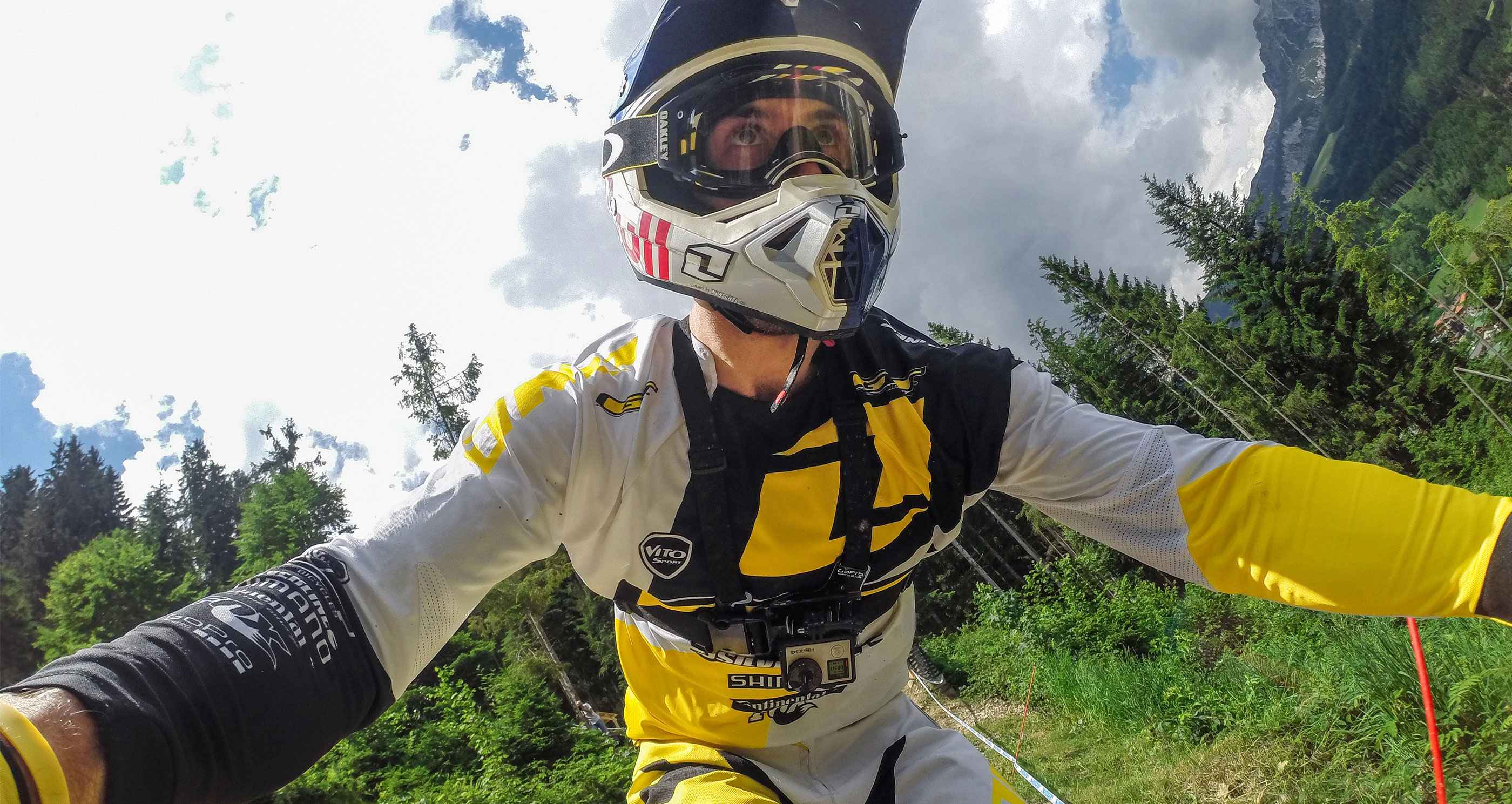 But I would love to have a gimbal for out of kart shots. They are usually pretty expensive, though.

That looks great. Have you thought about mounting on at the front facing back towards you? Could give a complimenting perspective to the forward and backwards one.

But I would love to have a gimbal for out of kart shots. They are usually pretty expensive, though.

I’ve got this gimbal which works quite well. Only a 2-axis gimbal so the panning isn’t managed by the motors. I figure it will hold up better when experiencing the cornering g-forces.

Some slow mo video from the gimbal/iPhone combination:

One of the joys of living in China, i picked this up for cheaper from Chinese Ebay -Taobao haha.

Here is my main on-track gear: 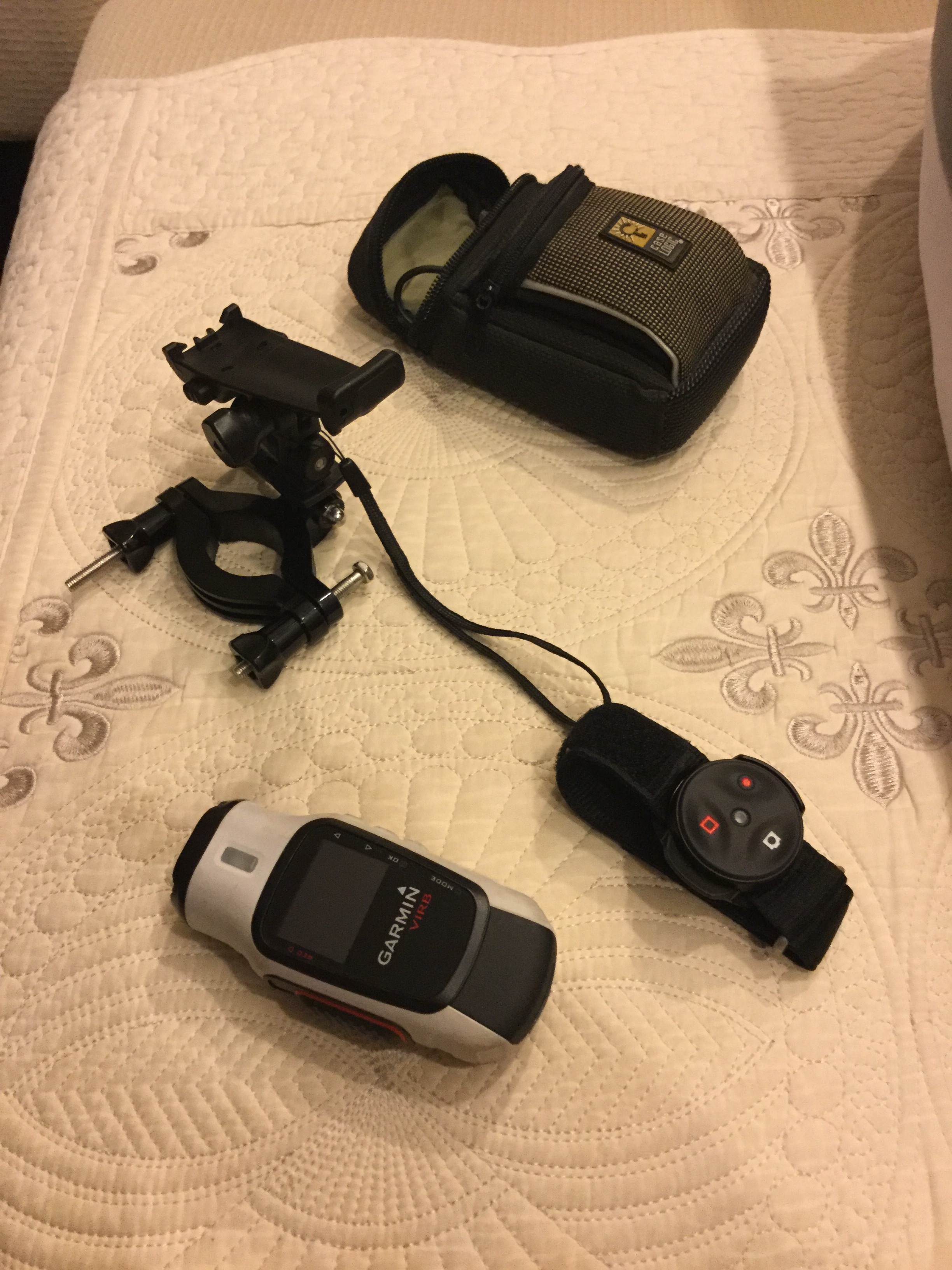 I mount it on top of the radiator cap with a gopro mounting system, it is quite solid but due I think to the design of the camera itself gets a lot of forward/backward shaking while driving. I’m still trying to minimize this.

You can see it mounted in my profile picture here: 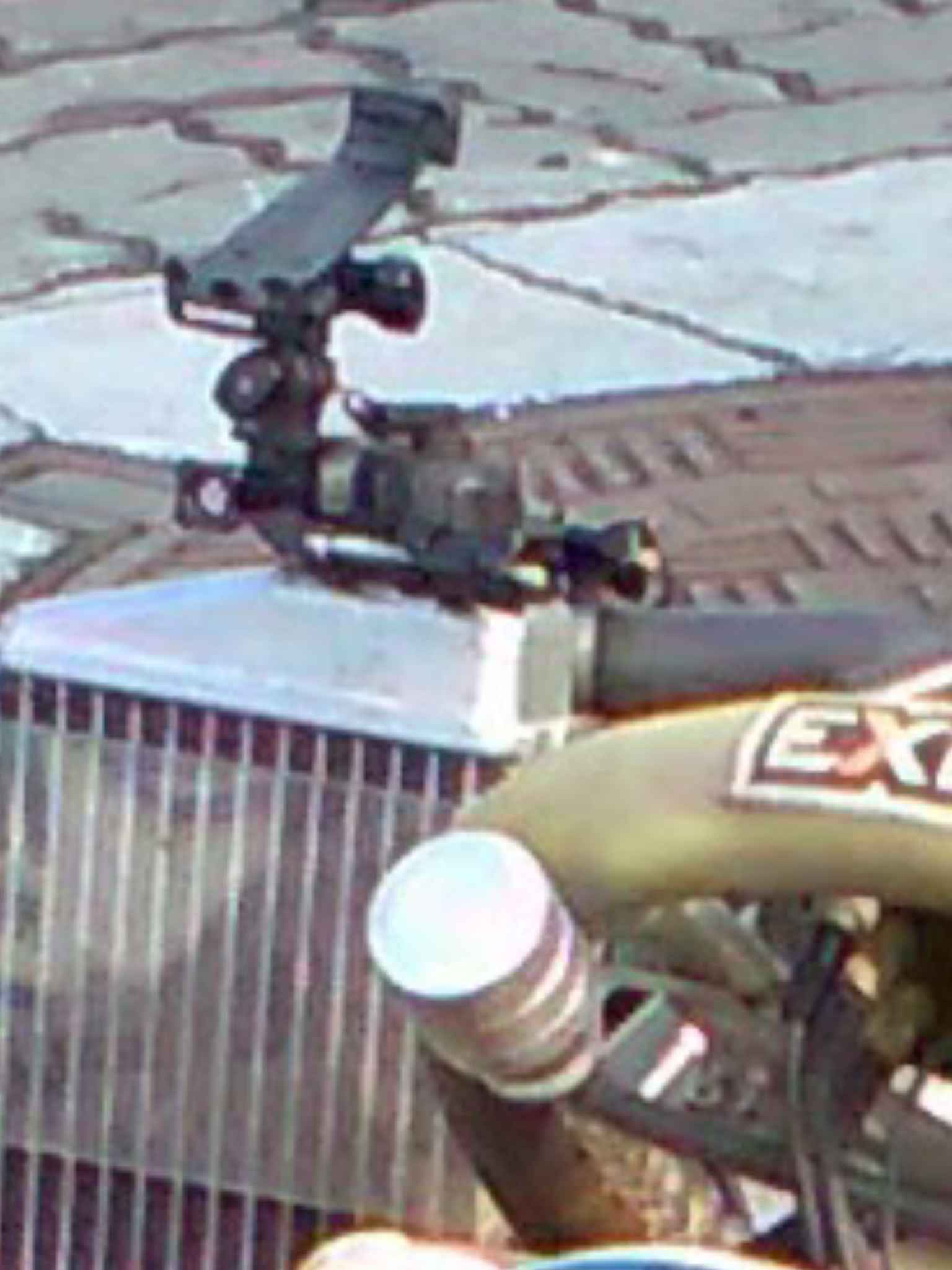 You can see the quality it comes out with here:
Slow Motion version
-my friend runs a gopro on the same track for you to compare if you’d like:
Lap Times Compared

I’ve previously mounted it on the other side attached to the frame but prefer the view from further out on the kart, and the track runs clockwise mostly so the view from the inside is normally more exciting.

Editing is done mostly in Garmin Virb Edit which allows me to import gps data from alternate sources or, for laziness, I prefer straight from the camera’s internals.

I run a mycron4 so I need to get data via USB out of it, couple this with Race Render being non-native on the mac currently. Its a pain in the butt so I’ve not used the mycron4 much for data and lap analysis.

I’ve also purchased Harry’s LapTimer for iOS but haven’t expanded on a karting setup using iOS devices. It looks great for car racing but may not be suitable for kart racing currently.

I started to look into that and found that my current mount has to be moved, but I am planning on trying a couple more views.

I’m trying to use my Garmin Virb XE and the video is turning out pretty shaky. I don’t think it’s the camera as much as it’s the mounting. I have it mounted pretty rigidly high up on the nassau, and I have that pretty firmly secured also.

Video from this race weekend.

Other things that need to be worked on is improving the track map. I believe that either all the bouncing or lack of good GPS signal when going under trees is affecting the map, which then affects speeds and times.

Something I’ve been looking into is the Garmin Glo to boost the number of satellites the camera can use. I heard good things from a road racing friend. Any thoughts from Garmin or data geeks out there?
https://buy.garmin.com/en-US/US/p/109827

The image stabilization on the hero6 is really good compared to previous models. I mount the camera in the front faring and despite all the vibrations, it is noticeably smoother than previous iterations. Here’s a sample:

Thanks @Bimodal_Rocket. That is a nice video. What are you using to get that data in the left hand corner?

I’m also running LO206, so the vibrations from the motor are at a lower range then 2 cycle typically. I think that might have something to do with the issue of vibration in the video also.

I can’t seem to get my youtube video to display in the post, only the link. Whats the magic sauce to get it to display?

The hero 5 and 6 have gps telemetry. Within the gopro suite of software there is a program called Quik. You can elect to turn on gauges like speedo, g force etc within Quik and it puts them on your video. Alternatively, a program such as race render also allows you to place gauges onscreen.

Whats the magic sauce to get it to display?

You have a have a line break between the paragraph above the YouTube link for some reason.

Thanks @KartingIsLife, probably the only thing I didn’t try yet.

I forgot GoPro had telemetry now, but it still does not offer other bluetooth and ANT+ sensors that can be added like Garmin does.

The other team I race with gave up on GoPros since SD cards would go bad and all the race video for the day would be lost. Switched to Garmin and have never had a problem with them.

I haven’t had that problem. That being said they are fairly pricey compared to their competition. Also, their editing software isn’t all that great, it seems to assume you want to make music videos out of everything and have the attention span of a puppy. I did have one go careening off the track at 50mph and survive, so they are well made. The big selling point to me though is the image stabilization. However, I believe fancy editing suites offer software stabilization that is very good.
In my case I just take gopro footage and use hit film express to edit. Messing around with race render too.