So, I’ve had a repeating nightmare, across two different engines types at this point, whereby the nuts which connect the carb to the reed block eventually work their way loose, which results in the carb almost coming off on the track.

(in a related note, it is impressive just how long and how loose the carb can flop around for while still somehow keeping the engine running)

There is no room to double-nut this area (not enough clearance), the nuts themselves are extra thin 6mm so don’t look like a safety wire candidate (which would be my preference). I can’t possibly be the only one that has experienced this, so if anyone else can offer the no-worries, please do! (short of any other ideas I might just drill right through the bolt and the nut while it’s mounted and safety wire that - not very appealing though)

Would a lock nut or lock washer fit/work with what you have?

Can you use some type of thread locking compound like lock-tite? Blue is easier to remove, but the Red is for stuff you rarely break loose.

Would a lock nut or lock washer fit/work with what you have?
I actually tried lock nuts after the second time it happened, and now they’ve failed, too. I could add lock washers (which may have been a better choice than the locknuts, because I think the heat finally got to the nylon of the locknuts), but at this point I’m so tired of this issue that I’m wanting the next tier of security (safety wire or equivalent).

Can you use some type of thread locking compound like lock-tite? Blue is easier to remove, but the Red is for stuff you rarely break loose.
Yeah, not ready to red loctite my carb on there, lol, and blue is kind of like the lock washers in terms of still feeling it’s not-secure enough possibly. But maybe lock washers AND blue locktite…

I would try blue Loctitie. After it has cured in, clean the threads left beyond the nut then apply a dab of silicone right at the outer face of the nut. If that fails, try something harder, like an enamel. That might just do the trick.

That’s pretty weird. Nylocks have always worked for me on the likes of the tillotson 360. For the barrel type nuts I’ve never used any locking material.

As it happens, this issue involves a tillotson 360 (on a PRD Fireball). It also happened once with my KPV (barrel type nuts). Well, a lot of good ideas, I think - will probably just throw the kitchen sink at this now and hopefully have one less issue in the future.

There is a jig you can get to drill a safety wire hole across two adjacent flats of the nut, then safety wire one to the other. Doesn’t need to be a big hole, standard safety wire is .025” so a .03 hole is plenty. 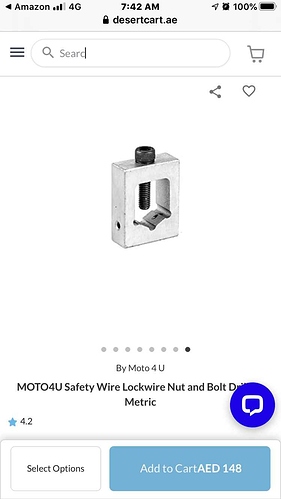 I have that exact jig for drilling things, but the thin walled 6mm nuts that I’m working with a too small to get a hole through without also going through the stud, which is where my final solution of just drilling straight through both the nut and the stud came from.

Also, I found this while looking around and it does a great job of showing what we’re all up against (vibration test of various types of fastening solutions). Kind of fun:

Ahhh now I get you re thin walled nut. Your only options then are straight through either use safety wire or a cotter pin, or consider a pure metallic lock nut - without nylon. We use them on planes pretty much everywhere. Why is it thin walled though? Clearance?

Is your stud metric or imperial? If it’s imperial I can shoot you a few part numbers across to look for.

That page has some interesting looking stuff. An all metal locknut without the nylon sounds good, as I came across something that said nylon locknuts shouldn’t be used above 250 degrees F. Also, I think my description of the “thin walls” is a little misleading; the locknuts nuts I have are normal sized for an M6, it’s just that an M6 nut is so darn small.

The HL-360 is nearly identical to the HL-334AB on my leopard (no balance shaft). I think the only difference is the bore. It is a pain in the butt to tighten those nuts with out removing the engine because the seat doesn’t leave much clearance for a wrench. Safety wire could work, but its problematic putting a hole through the stud and nut while having everything properly tight or getting them lined up again after service.

I would stick with Loc-tite Blue. If you want some extra insurance, then swap out for a locking nut and still use the loc-tite. The reed block that it mounts to does not get that hot.

Thanks Richard - I actually just ordered M6, M8, and M10 jetnuts from here (their prices per unit were hard to beat). This is very a preferable way to handle things, as I realized there are few issues with drilling all the way through the nut and the bolt in that area (no guarantee that the holes will line up again with a change in either the nut, the carb, or the engine - which I have multiples of). This has been a time consuming task to figure all of this out, but since it up’s my fastener-game by a lot, it’s a fairly priceless benefit in motorsport terms.

GregF - solved the ‘not much clearance for the wrench’ issue - I cut the end off a spare 10mm wrench and will keep it in my toolbox as a specialty tool. Wayyy less hassle.

Just an additional note bud, you might find the first time you remove the nuts they wind the stud out from the engine, if that happens just loctite the stud back in, then you’re good to go.

Ive got 3 Karts, one with an X30, two with Leopards!
The Carbs on both Leopards have come completely loose a couple of times.

first of all the studs are very short and barely protrude from the nuts… (Im thinking of fitting slightly longer studs).

Secondly Nylock nuts can loose their tension when old, especially where heat and vibration are present… Also the nuts used to hold carbs on seem to be very low profile so not many threads would reduce the friction/binding capacity…

So New nuts or better still maybe the aerolock nuts mentioned above… But I still think a longer stud would be helpfull as well.

That makes sense as the leopards don’t have a balance shaft like the x30 does.

So New nuts or better still maybe the aerolock nuts mentioned above… But I still think a longer stud would be helpfull as well.

I run a leopard as well, but have not had any issues yet with the nuts coming loose in the couple of years I have been running it. I got it second hand, so not sure if the studs are factory or not, but might be a good idea to replace the studs. Not sure how much longer you can go as the carb body may interfere with the end of the stud. It is not the best design.

That’s a good point about the lack of a balance shaft, James. The PRD, not-incidentally, is basically a clone of the Leopard…

Glad I have my jetlock nuts, and I’m guessing that’s all I’ll need for this specific issue, but could those with experience with vibration plates care to share their experience with them in terms of what, if any difference they make? I’ve seen them around, Odenthal has just started making a general use copper one, and IAME has made one for the Leopard for probably forever.