Not sure if anyone else is a ClickHole fan (think of it like the Onion but far more absurdist and weird), but in a bizarre collision of worlds, they used a pic of a Kid Kart for one of their posts today. 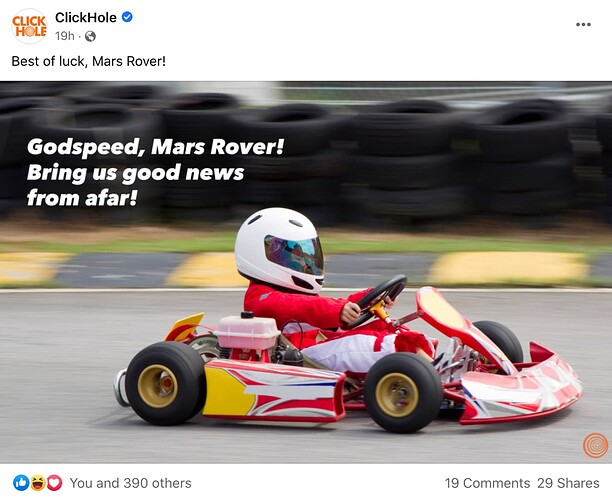 There is something fundamentally hilarious about kid karts. It’s kind of like puppies and their big paws. Also, giant helmets. Every time I think of Rick Moranis as Darth Vader inSpace balls. 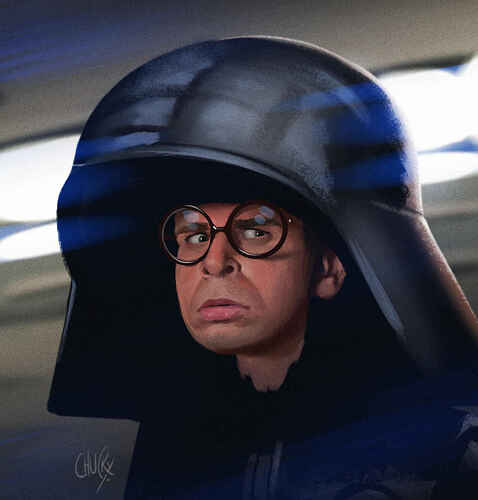 Don’t Let The Fear Of Striking Out Keep You From Playing The Game: Go Pick Up A Squirrel With Your Hands

Too often in life we allow fear to dictate our decisions. We push our hopes and dreams to the wayside out of fear for what could go wrong, but all this does is leave us unfulfilled and plagued with regret. This is a terrible way to live, and it’s time to start living on your own terms. You need to start saying “Yes!” to life, and you need to do so TODAY. So, go ahead, follow your heart: Go pick up a squirrel with your hands.

Clickhole, what a name LOL. Maybe we should rename Kartpulse Karthole?
Or is that more of a name for a type of karting driver

They check our karthole in tech sometimes.

You have a kart proctologist on staff in tech? Nice.

So that’s what they are doing when they probe my karthole in tech. (I didn’t start this, I blame TJ) 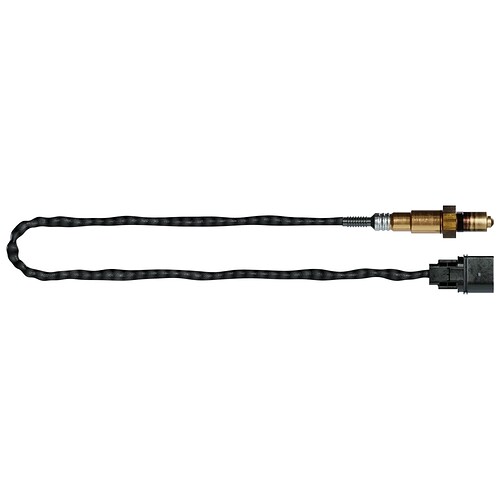 His name is Frank and he is very gentle with his no go gauge.

His name is Frank and he is very gentle with his no go gauge. 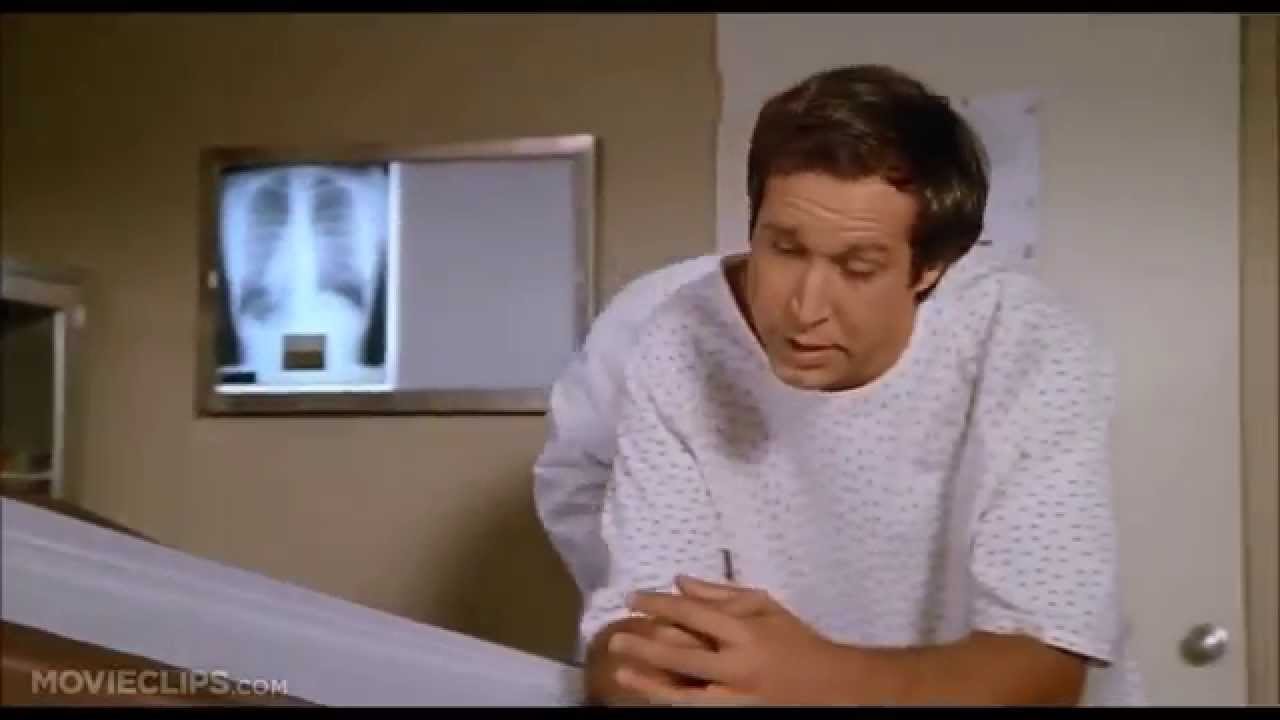 Saw a little girl pick up a squirrel. Squirrel did absolutely nothing.
That girl scares me

Oh good, I thought my tech was the only one that did that.

@Bimodal_Rocket we are massholes because of the amount of massive holes in our roads.
You’d drive like a masshole too if your roads looked like Swiss cheese
Are Boston drivers actually that bad? I’ve only person driven in NE so I’m not sure if it’s true or not.
Have you guys heard of prawo jazdy?

I’m not sure where masshole comes from but it’s an internet thing I heard. Personally, I have never driven in Boston so dont know if it’s worse than NJ/NY. Would take some work, but anything is possible.

Re: Prawo Jazdy… I had not heard of him but wiki says:

"Prawo Jazdy " was a supposed Polish national who was listed by the Garda Síochána, the national police service of the Republic of Ireland, in a police criminal database as having committed more than 50 traffic violations in Ireland. A 2007 memorandum stated that an investigation revealed prawo jazdy(pronounced [ˈpra.vɔ ˈjaz.dɨ]) to be Polish for ‘driving licence’, with the error arising due to officers mistaking the phrase, printed on Polish driving licences, to be a personal name while issuing traffic tickets.

So let’s see, we have go karts, squirrel wrangling, proctology, and polish driving licenses so far. What’s next?

So let’s see, we have go karts, squirrel wrangling, proctology, and polish driving licenses so far. What’s next?

Texas BBQ is the best BBQ. 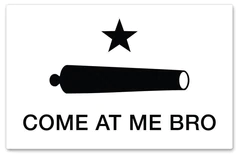 Lemme see if I can find @GregF excellent walkthrough of bbq.

Sure. There are different Meat and Flavor profiles in the BBQ world. Starting on the East Coast you have Carolina (no differentiation between NC and SC) BBQ. It is generally has Vinegar Based Sauces and use mainly Pork as their protein, whole hog or sausage. There are a lot of Hog Farms in the Carolinas. The sauce is added at the end of the cooking process. Then you have the Memphis style, which features a Dry Rub approach (Meat is seasoned without a sauce and sometimes a sauce is served o…

Back to the topic at hand. Now living in Texas, probably the Meat Smoking Capital of the Country, dare I say the world and having a previously acquired hunger the for smoky deliciousness of low and slow cooked proteins, let me see if I can unwind this question. My Dad, recognizing my natural culinary talents having put delicious food in his belly for years, bought me a barrel style offset smoker for Christmas one year. [offset smoker] It was low end, leaked smoke all over and thin gauge meta…

The thought has crossed my mind to show up at the track with my smoker bellowing that gray goodness and sell off my tasty treats to fund my weekend.

Is it a tow behind smoker? Because that would be a hell of a sight. Towing a trailer towing a smoker. My kinda party.

I’m not sure where masshole comes from but it’s an internet thing I heard. Personally, I have never driven in Boston so dont know if it’s worse than NJ/NY. Would take some work, but anything is possible.

Not sure of the origin either but typically in NY if you encounter an erratic driver on the highway (changing lanes for no reason, can’t maintain a constant speed, or hanging out in the left lane) there are usually MA plates on the car. Other drivers mutter…Masshole!

Is it a tow behind smoker? Because that would be a hell of a sight.

I wish!!! Unfortunately mine is a free standing, but I know a guy that has a tow behind monster of a smoker. Maybe I can work out a deal with him where I buy the proteins and he mans the smoker, then we split the proceeds. Sort of like finding a food truck at the track. Neither of the tracks near me have much in the way of concessions. NTK recently opened a little burger stand, which is okay, but not the greatest.

if you encounter an erratic driver on the highway (changing lanes for no reason, can’t maintain a constant speed, or hanging out in the left lane) 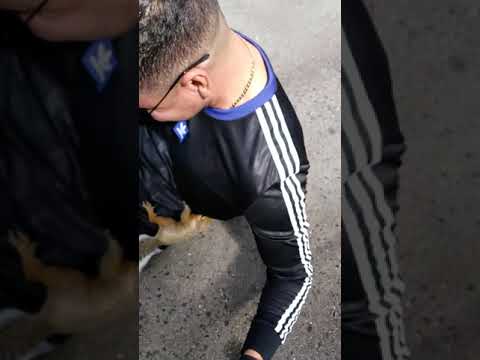