This is where @Bimodal_Rocket comes in with some clever names.

Still waiting on a few more Zingers for the AMP Enduro,

let me see if I can unwind this question.

I am feeling like an Old Man for catering to this topic on a karting site. F-it, good info is good info. …and smoked meats are Good Eats! (Yes, that was a shout out to Alton Brown of Atlanta, GA!)

Agreed, the hunger is stirring. Going to have to fire up the smoker soon!

I swear in a former life I wore a 10 Gal

The oldest teen in New Hampshire. This is a good thing.

@GregF I appreciate the breakdown on smokers. Who doesn’t like grilling and playing with fire, generally?

I did wonder given the similarity of the names of the 2 fellas wether it was some sort of bot thing but it seemed harmless enough. And, it’s somewhat relevant in a roundabout way!

Now living in Texas, probably the Meat Smoking Capital of the Country,

Educate this northern boy… I always thought BBQ was a specialty of the American south, ie SC, etc.

Sure. There are different Meat and Flavor profiles in the BBQ world.

Starting on the East Coast you have Carolina (no differentiation between NC and SC) BBQ. It is generally has Vinegar Based Sauces and use mainly Pork as their protein, whole hog or sausage. There are a lot of Hog Farms in the Carolinas. The sauce is added at the end of the cooking process.

Then you have the Memphis style, which features a Dry Rub approach (Meat is seasoned without a sauce and sometimes a sauce is served on the side) . The favored protein is Brisket, but Pork Ribs and Chicken are incorporated too. Sauces are usually Tomato based (i.e. ketchup with BBQ spices).

Next you have Kansas City style, similar to Memphis only with a wet dressing during the cooking process of a tomato based sauce. This creates a glazing effect on the meat during the cooking process. Often the manner in which Big Chain Restaurants use that offer BBQ dishes. They usually have the same Proteins as Memphis (Brisket, Ribs and Chicken).

Then there is Texas BBQ. Almost all of the protein comes from a cow. Brisket and Ribs, but they do like the Pork Sausage here too. You don’t often see pork ribs served. They follow the Memphis Dry Rub approach and do serve Sauce on the Side (usually tomato based), but typically only used if the cook is dry or under seasoned. “If the Meat isn’t juicy, throw some sauce on it” mentality. Its almost an insult to sauce your brisket. Sausage is fair game. The Sauce in TX tends to be a bit more peppery than elsewhere and stands to reason for the local tastes/produce.

Now what we use in our dry rubs is sort of confidential, as competition in the BBQ world is tough. I can tell you that it is common to coat the meat in some sort of paste or liquid that allows the dry seasonings to adhere during the cooking process. My personal secret is yellow mustard, but have heard of others using plain old honey or Dijon Mustard depending on the flavor profile they were looking for. The Black Bark is a desired effect of good seasoning and the low and slow cooking process. They are commonly referred to as Burnt Ends (high char to meat ratio).

Fascinating read, thank you. Which type is associated with heat (being fiery)?

I’m familiar with the Carolinas as I spent a fair amount of time around Charleston and have sampled a variety of their fare, which is lovely, but not what I would associate with “hot”.

I really like Cuban ribs. It’s dry rub. Place near me in NYC made really good Cuban ribs.

I would have to say that in the US, you don’t really see a lot Hot/Spicy rubs or sauces like you would find in the Caribbean or Central America. The Southwest, which is known for its Chili Peppers may have a twist that provides a little more heat than the others. I use peppers in many of my dishes, but never really associated it with BBQ.

We just had a new guy join our track. I think he owns an Indian restaurant (Dot not Feather), but he cooks (BBQ) his tail off and is always offering food to the 4 stroke comunity. Our track is segregated, 2 stokers park on one side of the track, 4 stroke on the other. Now when he starts cooking, the 2 stoke folks catch a whiff of the food and have been becoming more sociable with us all of a sudden, lol.

Food brings the World Together!

I tend not to eat much at the track, energy bars and dried fruit mostly, with Pocari drinks. Keeps me going nicely.

I have to admit, as an aging Driver, I do not have much of an appetite during race day especially when its really hot out. I mostly push fluids. When I was Crew, it was a different story.

I buy food at track and appreciate when there are good options.

And out on the left coast, you have Santa Maria BBQ. Meat consists of Tri-tip, cooked low and slow with a dry rub. Then this flavorful brisket is sliced and served with chunky salsa on top. Best served at a parking lot near you.

I hardly have an appetite on race day. I drink tons and that’s it. I kind of have to force myself to eat some lunch because I know I’ll need the calories. Now the nights after are a different story… I finished off my race weekend with a 1/2 burger with bacon, French fries, salad, and a milk shake

I have begun to treat Race Day like most athletes would treat the Game Day. Load up on the Carbs starting a day or two before and go light on the Day Of. Always pushing fluids. The old, “My Drinking Buddies and I have a Karting Problem”, comes into play more than it should.

Thabks for the breakdown. It is curious that there really isn’t spicy BBQ. I would have thought that such a thing existed given how BBQ’s cousin, Chili, is often quite hot. Someone needs to open a good BBQ joint around here!

It is curious that there really isn’t spicy BBQ. I would have thought that such a thing existed given how BBQ’s cousin, Chili

There is a whole global BBQ scene that I didn’t touch on. I am certain there are more than a fare few Asian BBQ’s that have much more Heat than the American ones do. Southeast Asia and India come to mind on that front.

Tony Bourdain presented several, may he rest in peace. He was a Great Story Teller.

In my travels, the flavors of barbeque, chili etc. all seem to come together the closer you get to New Mexico. I mean this in a good way, like a distillation.

Okay I have an odd ball question. Years ago I bought a large tub of the Cabelas Competition Steak Rub. IMHO is gods gift to steak.

But that was before Bass Pro purchased Cabelas, and now I can’t seem to find it anywhere. They have several seasonings that sound simular in name, but I don’t think they are the same.

If you google it it does come up at both Cabelas and Bass Pro, but they are dead links that don’t take you anywhere but their seasoning page; and they are not listed.

Anyone know if they are still available in the stores?

All I can find is All Purpose Steak Rub, not the regular’ original “steak rub.”

If anyone knows please let me know. 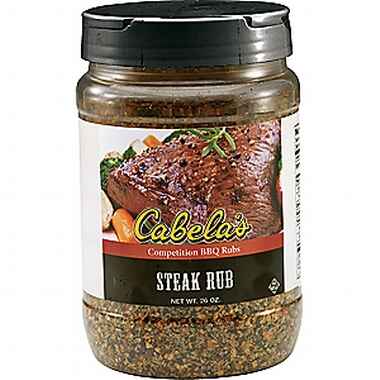