Do you look behind when you race?

When you’re in a race, on average how many times do you think you look over your shoulder?

Then multiply this by the amount of laps the race is… There’s a lot of opportunities drivers have to make mistakes when they stress themselves out!

For me, I try to only look behind 1-2 times every few laps, unless its the opening or final lap and I have pressure on my tail. If in the middle of a race a driver is faster I don’t try defend the position aggressively rather letting that kart drag me up to the next pack.

I created a video around some of the negatives behind looking over your shoulder too often, so keen to hear peoples thoughts on how they go about it. It is hard to do, but eventually never. It’s natural to want to do so since we lack side and/or rear view mirrors that you’d have in anything else, but you are only slowing yourself down doing so since you will always drift offline when you turn your head.

I look behind only if I’m under blue flags, only to gauge at which point to safely let them pass without hindrance.

If I’m racing, never. You can hear when somebody is on your tail, looking behind gives them the nod that they got you worried. Head forward. Focus. Don’t be intimidated

I talk about this a lot because I always got shit for it when I was younger.

I think it is driver dependent. I look once or twice a lap usually. For me, I think it’s important to gather all the information possible when you’re trying to control the race, so having a look to see what’s behind you, what the gap is, who is back there so you can plan your strategy against their particular driver style, and monitoring the race as a whole can be incredibly helpful. I try to stress to my drivers though looking back too much is a problem. It ruins your concentration and takes focus off going forward, and all the other reasons you state in your video David.

But as a whole, I think having that information on the karts behind can be very beneficial, if you’re able to do it without losing forward focus.

Some drivers aren’t able to look back at all without veering off the road, some drivers could drive the track blindfolded, so I think it depends on each individual driver and how their brain works and manages information.

Forgot to mention, it’s important if you’re going to look to look where it’s a safe place to do so. So onto a straight or something where you have some time to breathe and think and don’t have to spot an apex immediately.

At my local track, I use a couple spots to not necessarily look back, buy to scan the entire track. I know my competition well and I just like to keep tabs on who is closest to me and who we are going to come up on soon.

I never really thought about it until TJ brought it up in my coaching sessions. Basically, what he communicated was that on a given track there are typically 1 or 2 spots you can briefly glance back (that are good places to do so, useful).

I think TJ convinced me that it was helpful, if, you weren’t sure about your competition location, to get a sense of where they are.

I do a lot of rental racing and am one of the fast guys so I get to see the newer folks as they learn. Over-looking is a common issue amongst the newer karters.

Never, what is behind you doesn’t matter.

Thanks for sharing here David. Moved to Driving/Data/Fitness for now.

I try to look ahead and not focus behind me too much. If anything I try to “look” with my ears.

Like James and Richard said, I’ll usually hear if someone is behind me rather than check back on a lap-to-lap basis. However, I’m not opposed to a quick glance to check the gap if there is someone close and use that to determine if I have to defend or not. I agree that doing it too much can be distracting and slow you down, but two other things that will definitely slow you down are being overtaken and blindly defending your position when you don’t really need to. A quick check behind when warranted can help prevent the latter two situations.

It does if it’s the last lap of the world cup and you need to know whether to defend your position or not. Not looking back could mean you defend when you don’t need to, compromise your lap and leave you exposed later on. Da Brabander lost the world cup in 2011 because he defended when he didnt need to (in my opinion), lost time and this allowed Thonon got on his tale and lunge him with 2 corners to go. 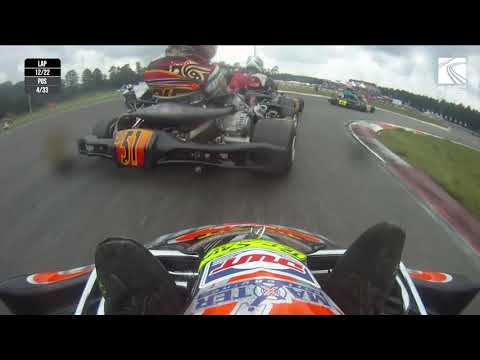 My policy is to tell drivers to never look behind…

It was bashed into me as a kid not to look behind, but I still occasionally do it.

Mostly I work out places on the track I can look across (like exiting a hairpin) and I don’t control my pace until I can see the next person across at that point.

But a driver should have enough of a feel for where people are without looking to know they should look on the last lap if they need to.

Then, of course, there is the big turn back with arm over back of seat to comically say where is everyone.

I tend to look for shadows on the track, in the right spots and obviously on a sunny day you can get a good idea if it’s time to start defending.

If I look back and I see “Driver A” behind me, I may think, “oh he’s quite aggressive. Maybe I should anticipate a late or risky move,” and this might help me prepare to the attack. If I look back and see “Driver B”, I may think, “this driver is very passive or mistake-prone, I can probably continue focusing ahead and will drop him eventually”. Those are two tidbits of information I find very helpful.

Also, if I look back over the course of two laps and see the gap closing, I now know that I need to make an overtake happen or I will get swallowed up from behind. So maybe I start to take more risk in passing the kart in front because the stakes are getting higher. Conversely, if I look back and see the gap opening, I know I can be a bit more patient and maybe wait for a mistake from the kart in front, rather than making a risky move.

I think all that information is crucial to working out your next few corners or laps or the remainder of your race. Tactically, you need that information. Unless of course you’re lights-out quick and just drive to the front and pull a gap.

Oddly now that I think about it, nearly all forms of four-wheeled motorsport have rear view mirrors, except for karting. And of course top-tier drivers across all motorsport use their mirrors. 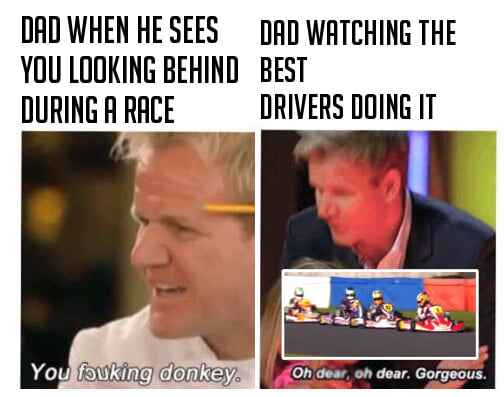 My policy is to tell drivers to never look behind…

I’ve had coaches (in a different sport) coach that way and it drove me insane. I put up with it when I was younger but now that I’m old I’d tell someone like that where they can go and in which activity they should engage

Edit: not picking a fight, I just don’t respond well the hardass leadership style. I’m more of a coaching as a collaborative effort. If an item allows for nuance I see that as part of coaching.

Oddly now that I think about it, nearly all forms of four-wheeled motorsport have rear view mirrors, except for karting. And of course top-tier drivers across all motorsport use their mirrors.

The corners you taught me to look back on are corners where you can have a fairly clear view to inside without a big head movement. So basically never on a straight!

So, for example, coming out of turn 3/4 at NJMP is a good example. The driver behind you will be visible to inside with slight head turn as the motion of the turn opens up the vision behind and right.

In any case, it’s a one and done. No need to re-verify.

I’m more of a coaching as a collaborative effort. If an item allows for nuance I see that as part of coaching.

I couldn’t agree more with this!!

My post was a joke about the nature of taking an absolute position as a coach, you will always become a hypocrite if you do…

it does u need to know to defend or not