Dominately owned 4 stroke in YOUR area . .

Everytime I trevel to other tracks I’m always facinated by the fact my local track runs 99% modified Subaru in their four stroke divisions; but when I travel, I never see them anywhere else. Being 100% honest, I’ve never seen (in person) anyone running WF for that matter.

If not LO206 or WF, what is the prodominate 4 stroke you folks see at your local track?

Pretty much all of the 4 stroke tracks that I see in FL have LO206, the only track that I can think of at the top of my head is Andersen RacePark where there’s another 4 stroke engine is the Tillotson T225. You also once mentioned I think Monticello had a different 4 stroke engine, I forget the name of it though

206 followed by world formula in MN. MN is one of the last bastions for World Formula along with New Hampshire.

On pavement the 206 is by far the most common across the US by a massive margin, but like anything there are some exceptions.

There’s usually about 3000 drivers listed on the Briggs Racing Series each year.

Subaru is definitely an outlier.

This brings up an interesting question, has anyone ever seen anything f other than gx270 or 390 on rentals in the USA? (Electric excluded).

Ocala used to have a Rotax 125 engine, other than that I don’t know

I wonder if Honda has a stranglehold on the European rental market too.

Didn’t some company make a 4t to compete with 2 stroke speeds in Europe? Is that where the WF originated from?
I wish wf replaced 206 or at least got bigger. It’s practically the same thing, and same price, but you aren’t just puttering down the straights.

I had to Google that Subaru engine! I’ve been karting on and off since 1993 and never heard of that engine! Looks cool though. Just shows how different areas have different trends. Here in the Midwest for pavement sprint the LO206 dominates. There are no others. In fact, half of all entries across all classes at our two home tracks are 206. It’s not just dominating 4 cycle, it’s starting to dominate all of sprint karting around here. It’s not surprising though considering how many 2 cycle options are around… you have several manufacturers like IAME, ROK, and Rotax and they each have multiple engines in their own lineup ie. Just IAME has swift, KA, X30, SSE, KZ-1, etc . Then you have some others like the Yamaha kt100 and stock Honda shifter which are still around some… with 206 it’s one engine from kid karts to super masters from light to super heavy… and it’s inexpensive, no blueprint, no major rebuild, and good parity. I do wish they had something faster though like a locked WF. I’m a 2 cycle guy at heart but you can’t argue with 40+ entries per class and tires that last 5 race weekends!

Didn’t some company make a 4t to compete with 2 stroke speeds in Europe? Is that where the WF originated from?
I wish wf replaced 206 or at least got bigger. It’s practically the same thing, and same price, but you aren’t just puttering down the straights.

“World Formula” was not just an engine from Briggs and Stratton, but a class concept devised around 15-20 years ago by the CIK. Back then, the CIK had a new president; I can’t remember what his last name was, but it was something like “Busser” (someone here like Alan Dove will remember exactly what it was). Anyway, from what I recall he was of the classic bureaucrat mold who held a previous position elsewhere within the FIA and supposedly had no previous experience with kart racing whatsoever.

The CIK then came up with two proposals, and the first one was a horrible idea. The plan was to replace the 2-stroke motors run at the elite international level at the time (FA, ICA, JICA), with high-performance 4-strokes. Anyone fimiliar with racing a high-hp 4-stroke compared to a 2-stroke equivalent like in Motocross, and anyone aware with how much cost and development is involved running at the highest levels of karting, knew how ridiculously expensive this idea would be. Plus, the existing kart engine manufactures at the time had been building and racing 2 cycle motors for decades and had no interest in having their business turned upside down, if not wiped out completely. Naturally, they rebelled and the idea was eventually dropped. The companies that later built high-hp, 4-stroke kart motors for the TaG class, like Biland, may have orginally developed them for this concept, but I’m not quite sure about that.

The second proposal from the CIK was a lot more sensible, actually a great idea. This plan was a class for mass-produced, budget 4-stroke engines that can be made by multiple manufactures but built under one designated set of rules. This class of motors could then be raced as a budget, entry-level class anywhere around the world under the same ruleset, thus the name “World Formula”. Briggs and Stratton developed their own motor within this ruleset and named it as such. They seemed to be the only manufacturer to manufacture a World Formula spec motor in the U.S., but I know other engine companies built CIK World Formula spec motors in other parts of the world.

In fact, Subaru was/is one of those manufacturers, which makes me wonder if the Subaru engine mentioned above is actually a World Formula spec motor.

(someone here like Alan Dove will remember exactly what it was

You think too highly of me. I don’t remember anyone prior to Vincent Caro. The 4-stroke proposal I think had Mosley’s influence, but I can’t be 100% sure about that.

The companies that later built high-hp, 4-stroke kart motors for the TaG class, like Biland, may have orginally developed them for this concept, but I’m not quite sure about that.

Biland was twin cylinder so wasn’t built to CIK proposal as I believe it was a single cylinder proposal (happy to be corrected if wrong). However the Suter Vampire was certainly built to CIK spec and they were furious with the FIA when they abandoned the formula.

“World Formula” was not just an engine from Briggs and Stratton, but a class concept devised around 15-20 years ago by the CIK.

The CIK specification for World Formula was for an electric start 4 stroke engine with 15 hp.maximum. Retail price 800 swiss francs from memory.
I think this project was personally promoted by CIK president Ernst Buser who may have been more interested in promoting karting worldwide rather than pandering to the elite.
At the time every man and his dog were supposedly developing a w/f engine but engines had to be homologated and B&S were the only ones to achieve.
Clearly there are a number of engines now and then which would meet the spec.Honda GX 390 for example.
Nobody seemed interested in building a smaller lighter non industrial engine. Maybe the price limit was not attractive to potential manufacturers.
In the UK we already had our v.popular twin Honda GX 160 engined Prokarts and when The B&S W/F engine did arrive here it was something
of a disaster with multiple engine failures.
Has to be said that in UK we don’t have a history of running modified industrial 4 stroke engines as in the US so not sure where the blame lies.

The story, as it was told to me by the Subaru guys at my local track. Subaru got into the 4 stroke game and someone at my local track was “all in.” Became a distributor of Subaru motors. Out of the box, the Subaru Robin engines were around 7-8 hp (can’t remember exactly what he told me there). But at my track, we have a few made scientist types that began modifying them and currently most of them are pushing 18hp. They have a unique sound (understatement of the year) and they haul some serious butt; really not too far behind the 100cc class. Maybe 1-2 seconds +/- off in some cases (depending on the driver obviously).

However, I guess when Subaru sold off their small engine division the Robin Subaru engines began being made in China and were no longer made in Japan. Quality took a serious dive and now the Subaru guys are forced to fight over a scarcity of original parts that available on the market from eBay or from private collectors. I guess its becoming harder and harder to source parts. So as they told me, they know at some point they are going to have to switch to something different. I guess the Subaru engines they run are called the Ex21, and then new china knock off ones are called the Ex210.

When I popped by with my 206, they were all VERY interested as they had all heard of them, but only the transient racers brought them to our track. So now that a local owned one, they felt more confortable getting an up close and personal look at them, asking questions about them, etc. . .

The feedback I get from these folks is mixed. They love the 4 stroke class, but the 206 is so weak perfromance wise (or at least compared to their Subaru’s) that they said they would get bored with them. Couple that with the fact that they can’t be modded, which is something the Subaru guys like doing to theirs.

The owner of the track just yesterday made a comment as we were watching a 4 stroke cadet class race. There were 4 entries, one Subaru and 3 206’s. The 206’s were way out back with the Subaru out in front by a healthy clip. The owner told me most of the Subaru guys, are into their engines (on average) about $3,800. He was shaking his head in the negative because he said for that money they might as well be running an X30 engine.

I had no idea what the Subaru folks had into their motors, it never even dawned on me to ask. But they are quick on the track, and impressive to watch.

I am interested in seeing a World Formula in person, just to see how they compare to the 206 and the Subaru’s as those are the only 4 stroke I’ve seen in person. 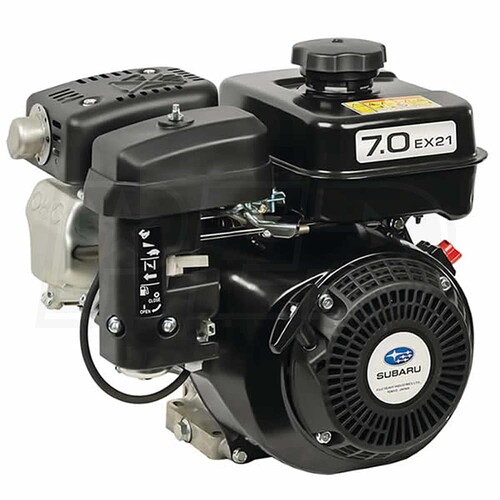 I would be too. I remember sort of recently I learned about a 4t kart engine that made x30 power and weighed less, but I can’t remember what it was called. I think it was blue

World formula is a pretty clean looking engine, and makes 13-15 hp. Cheap an easy to run. You can modify them, I’ve heard of 20+ hp, but by than you’d be better off with an x30. Most places also run them sealed. Love it

Our local club was the last strong hold of Honda Gx160 and Gx200 here in Ontario. They’ve started running mixed Honda/LO206 classes the last few years, and rumour has it they will be almost exclusively LO206 in the near future.

SKC is now down to only one WF class which is pretty sad. They are modding the engine this year and hopefully we will get more people to run WF.

It must be in the effort to promote the package on parity.

I’ll circle back and expand on this, but in essence the 206 was a lessons learned from the WF.