Bimota tried it first with the V Due 500. 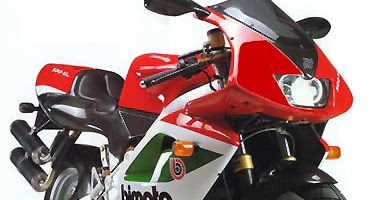 The Bimota V-Due 500 motorcycle, a 2-stroke giant killer that promised to revolutionize the industry... but ended up bankrupting Bimota.

Didn’t work well for them, but then they didn’t build dirtbikes. Different market.

What would the advantage to these fuel injected engines be? I know that some of the reason that it took KTM and other dirtbike manufacturers so long to bring fuel injection to their world was because it’s more complicated, and fuel injection doesn’t actually make more performance. Conversely, it adds weight and complexity to an otherwise straightforward setup.

There are a couple of benefits that one article I found mentioned. For one, they provide just the right amount of fuel at all times, which can allow the engine to idle, but in a kart application there are moments where we need more fuel for the upcoming situation. A furl injection system will not always be able to provide in these scenarios. Are these benefits more desirable than both the performance that will be lost and the cost that is being added?

Here’s the article I stole just about all my info from: http://motocrossactionmag.com/news/ask-the-mxperts-whats-holding-up-fuel-injected-two-stroke

Main benefit that’s been proposed to karting in the past is the avoidance of having to tune a carb. I’m sceptial that it would be quite that simple. There’s something to be said for “the devil you know”. Also when you look at how different CR125 in kart application vs moto you wonder how well such an injection system

Nonetheless, if the price is right and the support is there it might be worth testing throughly for potiental adoption on Karts.

Lastly, there’s the situation where a shortage of CR parts crops up now and again which causes problems.

Nah, for bikes the true main benefit is meeting emissions. Dirt bikes in CARB states need to be emissions compliant, in theory.

If one day states or countries begin requiring mandated emissions standards on and off road, fuel injection might HAVE to come to karting.

The only performance it could provide is mapping fuel across the rpm/load range and to allow the fueling to change with atmospheric conditions.

But we don’t really have problems with that anymore, its not like a change in air pressure mid race makes have the engines seize like it used to. For bikes it is mainly emissions. They would prefer a 2 stroke for weight and the fuel injection allows them to use a 2 stroke whilst meeting emissions requirements. If they are used for enduro events there may be a fuel saving too.

I generally like technology, and i think carbs are over priced but unless karting can make use of the components manufactured in the 100,000s for bikes, it’ll likely be too expensive for us. We’d need a fuel pump, injector, maf sensor and ecu with potential for a lambda sensor and other sensors. For a small application like karts I can’t see that coming in under $500 and that’s a big chunk of a kart engine.

In my view, you would need direct injection and forced air induction. DI would allow you to wait until the exhaust port was closed before fuel was added. FAI could clear and fill the cylinder cleanly in the shorter time allotted in a 2 stroke. Since you aren’t charging the crankcase with fuel/air you could lubricate it like a 4 stroke. And you don’t have to use transfer ports, you could use electric “valves”. Then you would need a freaking big muffler to handle the heat and noise (think racing 13b rotary). I think something like that could make a lot of power. Oh ya and DON’T call it a 2 stroke! Make up a new name or it will never fly.

But we don’t really have problems with that anymore, its not like a change in air pressure mid race makes have the engines seize like it used to.

That’s true, the punishment is not as harsh as with the older aircooled motors, but people still struggle with carbs sometimes getting performance from them and sometimes just getting them to run right. I’ve always looked at FI s another thing to tweak and play with in some way.

The only thing about that setup is that it might be peaky I think? Have you seen the turbo diesel concept thingy from Roland Holzner?

Yes I recall seeing that before. Diesel could help with piston/cylinder life and quiet the motor. I would think you could keep a good torque curve even in the gasoline motor with all the computer control of injection, ignition and valve timing (I was suggesting using solenoid controlled valves). 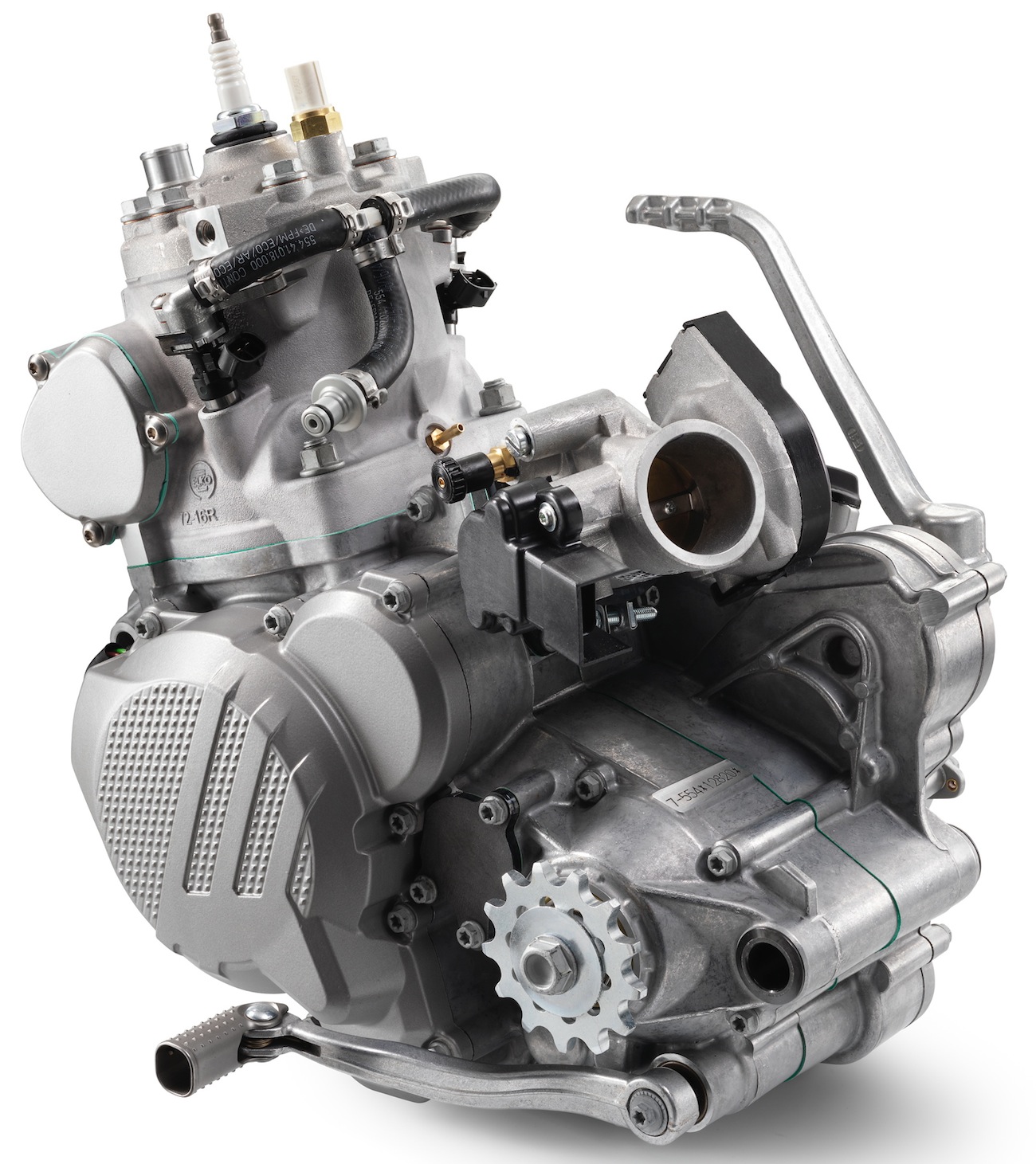 Spot on. Fuel is injected into the transfer ports. Not sure where oil is admitted though.

I would assume the oil just sits in there like a 4 stroke would. I guess there must be a direct link from the carb to the intake ports rather then swishing around the oil filled crankcase.

No it’s fed oil separately. Just not sure from where. Maybe the little spigot at the back of the jug. That mightn’t do much for main bearings though.

It looks like it has a little oil fill hole (with a plastic screw in it) just to the left of the gear change mechanism?

That is amazing! Hope you can sell those dirtbike rollers afterwards.

More details on this from Dirtbiketest.com Even though the possiblity of this coming to karting en-masse is remote, it’s still cool to keep tabs on… 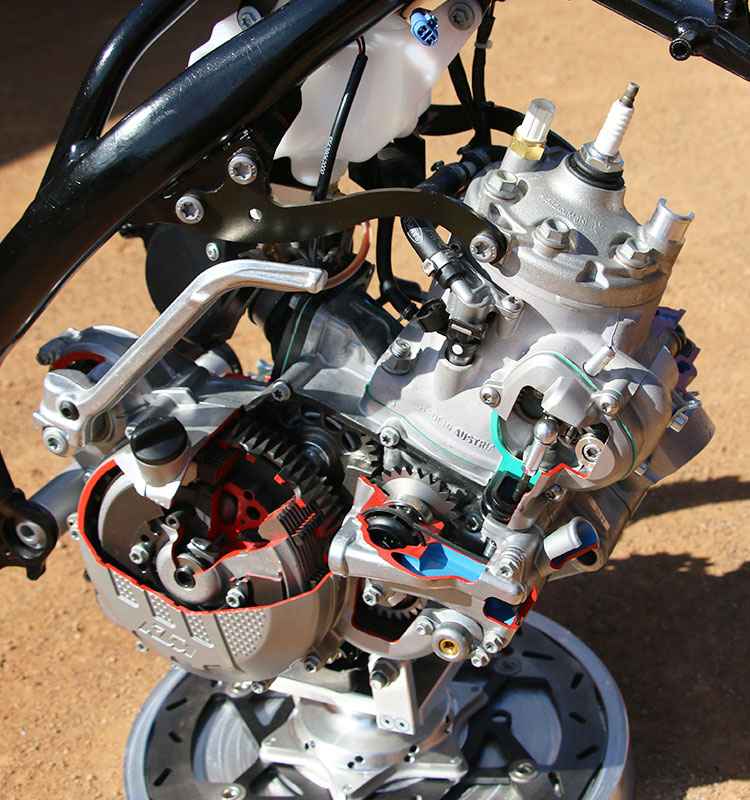 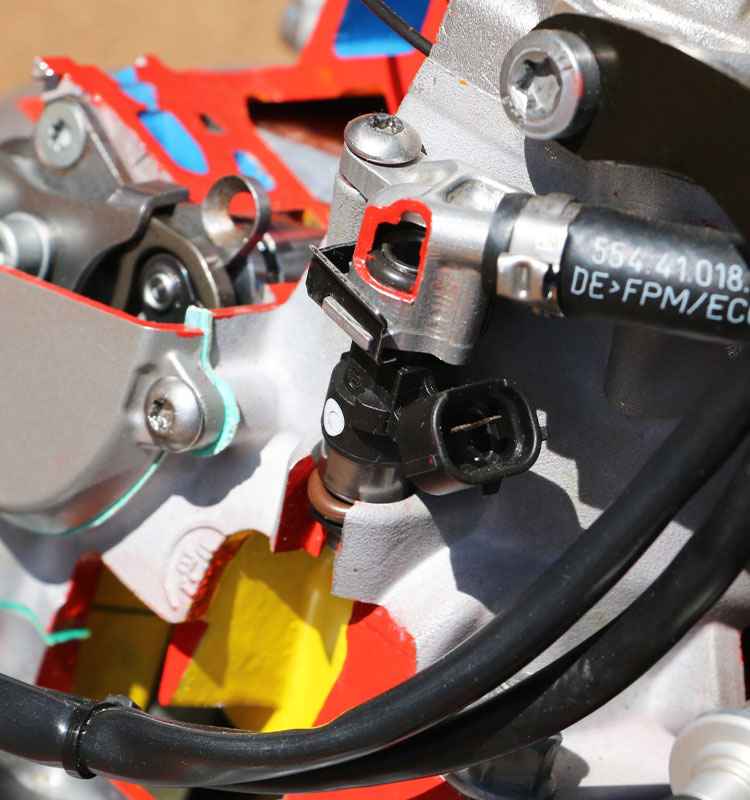 Some more details… from moto.it

Here’s a link to a translated version: 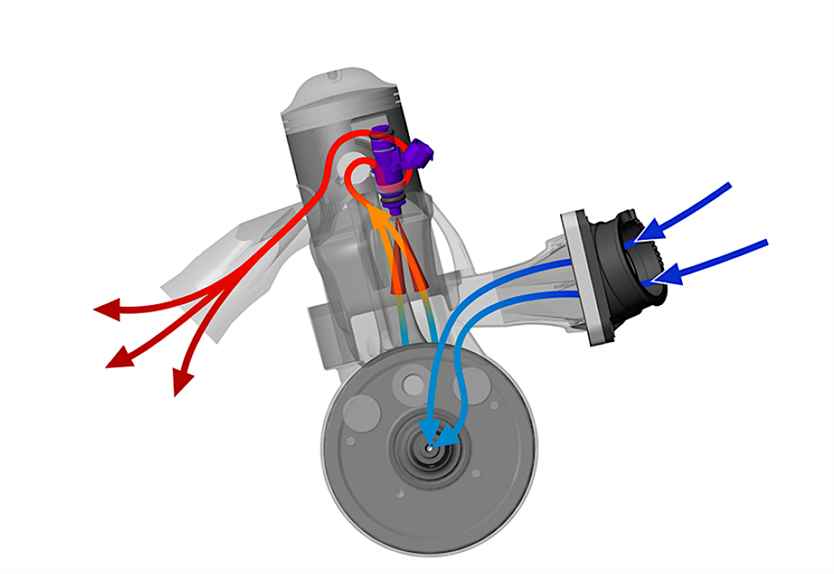 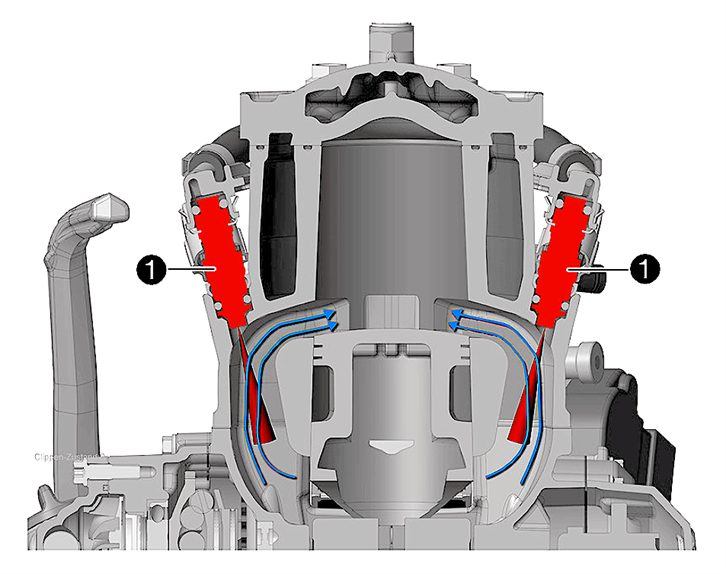