Base on what you posted in the “What are your 2017 racing plans?”

How did things turn out, Did that take a right turn on a the big oval or did you meet your challenges with success.

Road Racing with Championship Enduro Series, AKRA, and Dart Kart Club. My drive will be in Animal Sprint Junior and Animal Enduro Junior classes. I will be slaving away in the pits trying to keep two karts running and a young drive healthy, fit, and focused.

That is pretty much what we did. Had two back crashes early in the season, one resulted in injury and put him out for a race weekend, the other left the kart “Not Quite Right” but still working good enough to compete the season. Made lots of new friend tried out 5 new tracks. Definitely a season to remember, both of us had a great time.

Honestly? My 2017 plans this year were pretty terrible.

I lost count of the number of mechanical and electrical failures I had this year, that were out of my control, and I ended the season with a bent chassis and another one with some weird quirks that’ll probably have me retire it while I save for a brand new chassis.

Wasn’t going to race, KA class came out with the offer of a free engine, took advantage of that as well as my other sponsorships to pull together a good program on a small budget, ran well all year with no major dramas, ended 4th in USPKS points and was super consistent week in and week out. Finished 6th, 6th, 6th, 2nd, 3rd, 3rd, 2nd, and 7th (got roughed up off the track in 5th on the final lap). As I’m getting older I’m finding I’m more consistent, if not as outright quick.

Happy overall, still disappointed to not get a USPKS win. Over the past several years, I had 3 wins taken away after mechanical DNFs struck while I was leading X30 races on separate occasions. This year, I had a very strong chance to take one at New Castle, but contact in the opening laps sent me down to 8th. Had .2 a lap on the field without any draft and drove back to 3rd, but that one probably should’ve been mine. I was disappointed about that one and also I made a few mistakes in the final race at Joliet that should’ve probably saw me finish top 3 on Sunday, but instead I fell to 5th and then got stuck in the blender a bit on the last lap, so I was mad at myself about that too. Otherwise, no major dramas or bad feelings at the end of weekends.

Most importantly, I had lots of fun and limited the stress. Just was glad to be out at the track enjoying myself.

I had some vague goals going into 2017–build Apex Predator even larger, serve more clients. I also planned to continue working with The Colorado Karting Tour, although at the beginning of the year the role I was in was still slightly vague.

As the year progressed, AP did indeed grow. I got to work with some great clients for a second year, and the results really showed. Some new ones came aboard, and I think we performed above their expectations, which was very rewarding! Ultimately, AP drivers ended the year with a bunch of wins, and even a championship, which was neat!

In addition to that, I somehow ended up writing a book, getting more involved with a variety of karting projects, and met a ton of new friends, reconnected with others as well.

On The Colorado Karting Tour side, I really am still in awe of what we achieved. Sure, we are still a small regional series, but this year we’ve grown consistently by about 25%. Our sponsorship and support dollars were significantly up this year, which meant we were able to put on cool events, including our recent endurance race that featured a large cash payout. I had the fortune to work in several roles throughout the season, which further rounded-out my perspective and experience as an official. Like my work with AP, CKT this year allowed me to meet new people as well as see existing friends thrive and enjoy some fun times.

Karting in 2017 for me was quite something. I am certainly looking forward to 2018, although wouldn’t mind a couple months off to focus on other priorities!

We did better than expected!

Ran the full 206 Cup North and a few Central races. Moving up a year early(14) into the SR field I wasn’t sure what to expect. Randy set a goal of a top 5 and I was hoping for a top 10. Randy was right…

Finished 3rd in the North and 5th in Central. If not for a stinker at Badger, most likely a 2nd place in North. Randy picked up his first regional win and was on the podium every weekend but one. Almost went back to back wins but got rookied by a veteran on the last lap. Had many times he was the fastest of the session.

The Grand Nationals didn’t go to well for us as the knucklehead tuner had his worst performance of the year.

Did manage to qualify 8th of 35 on Sunday. I’ve never seen a track change so much in a day. I do have notes that’ll help for next year though!

All in all, a good year and we’ve met some great people. Now it’s a long off season.

I had a blast watching you guys race on facebook. Nice work both of you.

I finally got out in my own kart for the first time in four years. That was a win for me. I had hoped to do the MN state championships up this way but wasn’t able to make the schedule work, such is life.

It’s been hard to get something going between traveling for work, wife working weekends as a nurse and everything else going on. Then when I finally got to working on the the kart I’d be like, “well I should just spend the time on KartPulse rather than just something for me”. Travel for work stopped in August this year so that gave me to time to get the kart put together. It’s been unseasonably warm up in MN the last few days so I’ve been on a kart binge with my daughter. 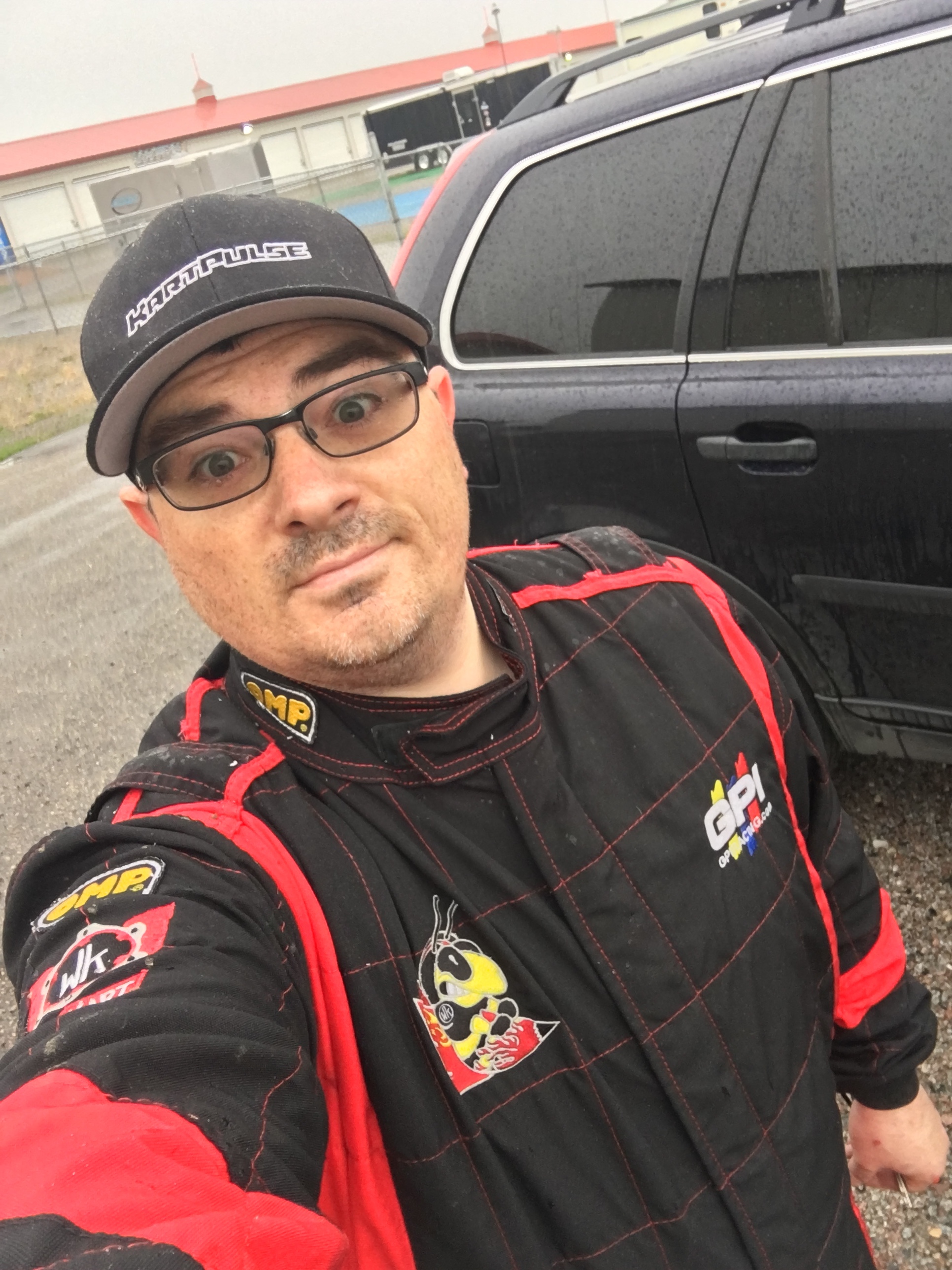 Main motivation was to get my kiddo behind the wheel. 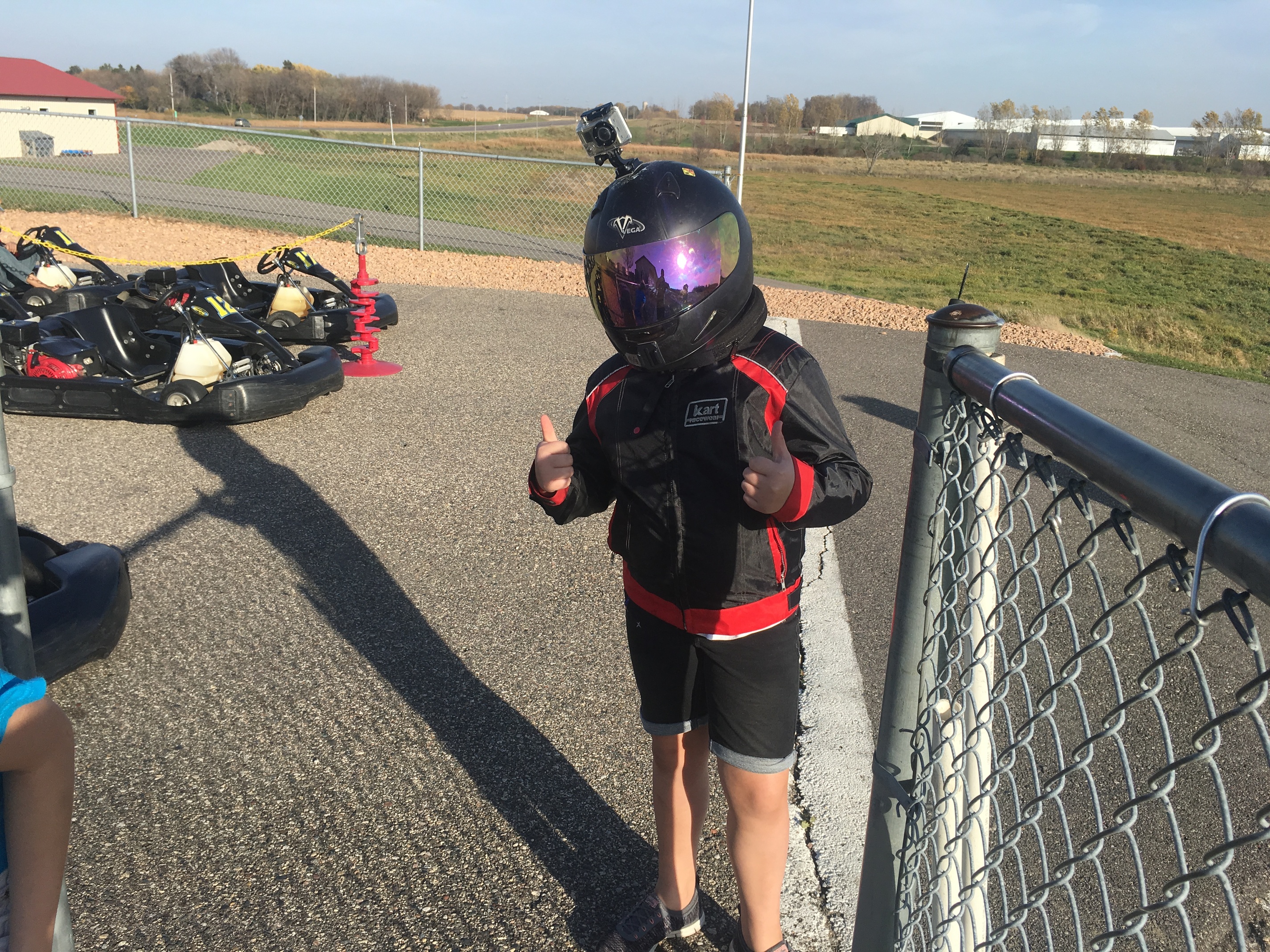 My season was just OK. I didn’t get to the track nearly enough. Started the season with an all new to me chassis and engine combo. Was able to check another bucket list track of my list when we ran the Corkscrew Nationals at Laguna Seca. Found out where I stand at the IKF Road Race Grand Nationals at The Ridge, and learned a lot about drafting that week. Learned about the sprint side of karting after 14 years as a road racer. They really are different worlds.

Our season went pretty well. Could have been a little better, but we learned a lot. We were able to try out some new tracks while running the Texas Sprint Racing Series, and it helped a lot. There will be more expectations next year.

Did one race, the Can Am karting challenge Canadian round in Rotax Master. Having not raced in 2 years, not raced a rotax in 4, not raced an OTK product in 15 and never having used the maxspeed purples I was pretty happy to be 1.7 seconds faster in the rain in qualifying and win by 8 seconds in the dry final on Sunday.

After being on am 8 year break from karting I finally got back into it and was just hoping for a top 10. Out of of a 28 kart class I finished 3rd in points which I couldn’t be happier with. Next year I plan on hitting a few more national level races.

My plan for 2017 was to start and organize an outdoor championship for rental karters in The Netherlands. Although it was quite successful (30 to 40 contestants per race), the quality of racing worsened to a point that drivers thought it’s reasonable to try to overtake at every corner. The track owners weren’t too happy with that so for next year drivers can only participate after they receive a personal invitation. Because of this the number of contestants will drop but I hope that the respect for the other drivers, the track owners and the karts will increase. My goal for 2018 is to create the atmosphere of a sportclub.

That’s cool @Matthijs_Hofman, didn’t know you are an organizer… Post a link to the series so we can check it out. I like the invite only idea for second season: ballsy, but has to be done.

Thanks James! See outdoorsprintcup.nl. How is your Dutch?

Thanks James! See outdoorsprintcup.nl. How is your Dutch?

My 2017 plans? I didn’t have any. I sold off my 206 stuff last year thinking I was done with karting for a while (got back into it in fall ‘14 after not havin raced since ‘08). But nope. Karting kept calling me back so I bought a super old kart with a KT100. Getting back to my roots. It’s all about fun, right?!