We have the same as Gage, the 5 degree Odenthal. Whatever you get, you’ll want at least the 5 degree.

As for oil, if you run any SKUSA or IKF sanctioned event, it will have to be 16:1 (8oz to gallon). I’ve always ran 16:1 in all our 2 strokes, as it helps preserve the engine life, and still creates good power.

I am in Syracuse, NY. Our local track Lafayette Motorsports Park is moving into the KA class, so mostly club level. I used Redline in my KT then switched to Motul and will probably stick with the Motul.

Anyone have gearing recommendations for KA100 at NOLA Motorsports Park? Specifically the Pro Tour layout for this year? 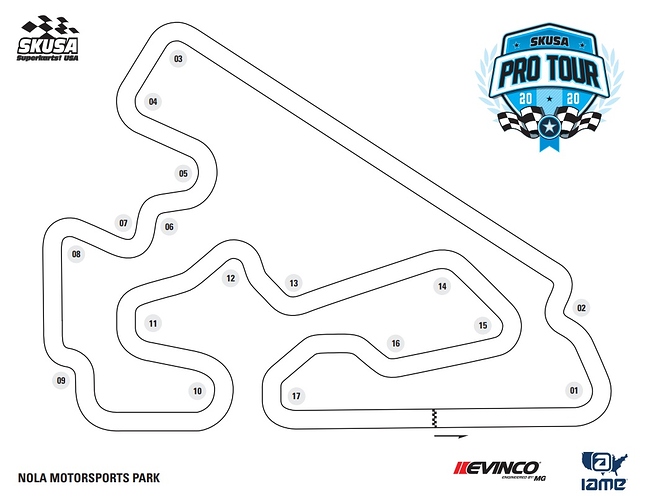 Not that my opinion matters to anyone, but that track is ridiculous. It reminds me of the track at Lubbock Texas. One big long straightaway with the rest of the track a bunch of tight turns and short straightaways. Really really hard to gear for!! Extremely hard on clutches.

Luckily, most of the tighter corners at NOLA are faster than they look, so it shouldn’t be any tougher to gear for vs. a track like NCMP.

You’ll be happy for the massive straightaway, as the rest of the track is pretty physical.

I don’t know about you, but I wouldn’t relax me going down that straightaway, I would just be worried about winding the engine too much.

Engines these days are far more bulletproof. The risk of blowing it up at the end of the straight is almost non-existent.

Combine that with stickier tires and wider karts, and the minimum speeds are much higher too, so the tight stuff isn’t as slow as it looks.

So in the old days, no limiter? Revs just keep rising till bam?

I think a lot of 2-stroke race motors don’t use rev limiters, even today. My TM K9 doesn’t have a rev limiter. Generally it won’t make enough power to spin the engine any higher than 15-16k rpm due to carb sizing; but, there’s no ignition cut to stop it from going higher.

Today’s motors have better quality materials and spec’s that make them fairly reliable. But take any motor, reduce the squish down to almost nothing, turn them at 17K for long periods and you’re asking for problems. At 17000 RPM, the piston is traveling up & down about 280 times a second. Any stretch in the rod and the piston will introducing itself to the head.

Seems like it could be similar to a Speedsportz ratio with the long straight and pretty fast tight corners but I don’t remember what people ran for KA there in the past.

Most engines still today don’t have limiters. It’s not just in the old days. Yamaha, KA, HPV, Leopard, most other TaG engines…

The track map is decieving, the track is actually pretty fast and the hairpins are practically non-existent.
Here"s some onboard of Zach Holden a few years back winning there.
Granted this is x30 but still gives a good idea on corners. He sits on the rev limiter for half of the straight, so I imagine that gear for a track like this would be similar to NCMP.

Tj,
What stops my engine from going north of 16,250ish rpm? I assumed there was a limiter.

Let’s say I wanted to detune engine to run at a max of 15k, what would allow me to do that?

Your X30 has a limiter. If you wanted to change that limiter you would need a new set of electronics that had a 15k limiter.

Probably going to be a taller ratio than at Speedsportz because it’s a much longer straight. It will be taller than anything we’ve ran before.

can anyone give me gearing targets for KA @ GoPro?

Their site lists 10/72 as a target gearing but for chain length reasons I’d prefer to run like 11/79 instead to get basically the same ratio.

Is there a specific reason to run the 10T driver at GoPro that should make me consider it over the 11? (ground clearance with smaller rear sprocket?)

That gearing sounds fine. The only place you would have clearance concerns would be the exit curbs in turns 6 and 7, but I don’t know if they let you go 4-off there like they do at national events anyway. Plus a 79 would probably clear that just fine anyway.