Is black oil dripping from your exhaust?

I have a big problem because I have everything dirty on the back od kart. After riding, the helmet, seat, exhaust axle and engine are dirty.

The factory settings are very rich, currently I have the L45 ‘and H45’ setup. At lower values, the engine starts to revolve poorly, it chokes. The spark plug is black, slightly wet. Motul Kart Grand Prix oil, 5%. The spark plug temperature is according to the service manual. After each session, I have to wipe everything, everything is black oil. In YouTube videos or photos, I haven’t seen anyone who has the same engine had everything so dirty. I know the revs on the track are different, but it’s a nightmare.

Hi mate, it seems to me your engine isn’t burning the oil, it’s burning the fuel and leaving the oil behind, maybe because it isn’t mixing well with the fuel. Have you tried a different oil? What fuel are you using?

Was it doing that prior to rebuilding the Carb?

98 normal car fuel, but good quality.
I don’t know, how it works before rebuild, because I bought a go-kart that stood there for some time, I did not start it, but I took it all apart and put it together on new parts, cleaning, checking and repairing everything

I have a few suggestions:

Is the fuel ethanol free? Ethanol can play havoc on the seals, diaphragms and soft metering needle tip of the Carburetor.

Start with this as a guide for Tuning the Needles:
https://www.srsengines.com/technical-library/tag-kart-engines/srs-parilla-leopard-carb-settings
It helped me when I first started. The Setting in the Manual caused excessive oil spitting from the exhaust side for me too. Low speed needle could be to rich as well. To what extent did you rebuild the carb? Did you replace the metering needle and seat or just the gaskets and diaphramgs? A bad seat, worn needle tip or debris could be dumping too much fuel at idle.

Check the piston, ring and cylinder if you have not already. As the fuel/air mix travels through the engine, it leaves a thin film of oil behind. The piston ring should swipe excess oil from the cylinder walls with each pass. Any irregular surfaces could allow over oiling. You can pull the exhaust header and rotate the crank for half a view of the piston and sleeve or pull the cylinder and for a full view of both. Very common in the Automotive world these days is carbon building up around the rings and causing it to stick. This allows excessive oil blow by. Mind you that is a four stroke engine and not a two stroke, but the principle is the same. There may also be a slight drop in compression from a stuck ring or worn friction surfaces. As I understand it, most top ends are rebuilt before this typically begins, but as you say, the kart/engine is new to you.

Depending on the ambient air temp and atmospheric pressure, you may have to alter the spark plug temp. I may have this backwards, but as I understand it in warmer weather you use a colder plug and in cooler weather you use a warmer plug. The different plug temps somehow change the rate of ignition of the fuel load inside the combustion chamber creating either a faster/hotter burn or a slower/cooler burn relative to one another. The higher the ambient temp, the higher the combustion temp and so you can regulate combustion temps in this manner. Ideally you want to find a plug temp that burns as much of the fuel load as possible, without creating a pre-detonation situation and power falling off or fuel load not combusting completely and power falling off with the added result of excess fuel/oil in the exhaust. Atmospheric pressure (aka Air Density) affects amount of fuel charge going into the engine as well. Since air temp affects air pressure along a few other factors, most people use an Air Density Gauge to Tune by rather than temp alone.

It’s normal for a Leopard to have a little oily residue from the exhaust. Most people have some sort of heat wrap around the flex to eliminate some of the oil.

But also if you’re only putting around at 6-10k, you’re never really getting the engine up to proper RPM and load anyway, and that’s likely contributing to the excess oil.

The piston is new, the cylinder is honed. There is a complete repair kit in the carburetor, needle seat, diaphragms.

It uses a fiberglass wrap for the exhaust connection, but it picks up oil very quickly and is all wet.

I use a spark plug that is standardized by service manual and suitable for all conditions. Compromise between warm and cold spark plug, NGK BR10EG.

I thought to make a mixture of 3%, many people from karting told me that they drive on such a mixture. Although the manual service says 6% … That’s a lot.

Some exhaust oil is ok, especially when driving at low revs. But so much that the frame, the entire exhaust, the seat or the helmet are in oil? The spark plug is still not the correct color.

I assume you did a proper Break -In after the rebuild? @tjkoyen makes a good point. If you are not getting engine up to proper running temp and not winding it up close to max revs, then the lack of exhaust gas flow rate may be leaving oil excessively at the flex joints.

Additionally check that the header, flex and pipe meeting surfaces are all square/flush with each other. If there is a slight up bend in the pipe, that could allow the flex to be slightly expanded or not sealing as well and leave a gap for the excessive oil to exit over the bearings and axle.

Unless you are experienced with tuning I would not play with the oil ratios too much. It could increase wear and shorten the interval/increase expense of rebuilds. Also it will depend on what type of Oil you are using as to what your ideal ratios would be. I forget which, Castors or Synthetics have a wider margin of safety.

I tried to do engine break-in as in the manual service, but on the track I would have done it much better. It is definitely slower and lighter brake in process.

Carbs for 2-stroke race engines are generally not good at anything other than full throttle / max RPM settings.

I’m with TJ here, get this thing on a track where you get it fully up to temp and spin it to 15,000 plus for a few laps and see if you still have the issue.

If you are talking water temp at the head, 90C sounds way to high. You should warm the engine on the stand up to about 40C (105F) and normal running temp best around 49C (120F). Seems like a high of 90C (194*F) would ignite the fuel on its way into the engine causing horrible pre-detonation.

If you are talking about Head Temp at the spark plug, I am less familiar with the working ranges. those may be close to the mark. Perhaps someone with more experience with head temps could chime in. Sounds as though based on those numbers you are still not getting engine up to good temp and possibly too rich on the needle settings.

I might have same issue with my iame 175 super sifter. Its equipped with tillotson carb (HB 15 A) that has seen at least 3 seasons of racing.

Throttle shaft has developed excessive play - bad news as on this tillotson model theres extra fuel feed channel via throttle shaft. So it runs way way too rich, pukes and splutters if I even try to run on factory settings. I have opened air screw about one revolution more than in manual - I couldnt adjust needles enough to make engine run clear between sifts. It hesitated a bit each time and just wasnt right.

On tillotson HB15 the throttle lever/cable fixture assembly cause side pressure to throttle saft bore. Theres no seal on the saft or bushings. Saft eats carbs aluminum body as time goes by 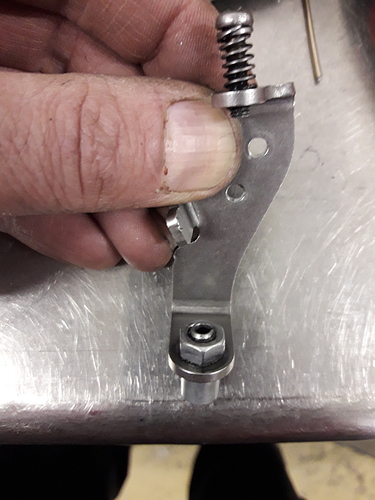 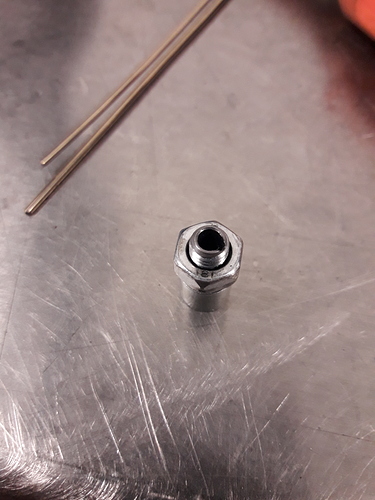 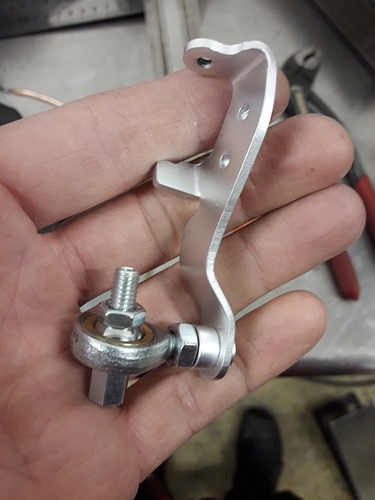 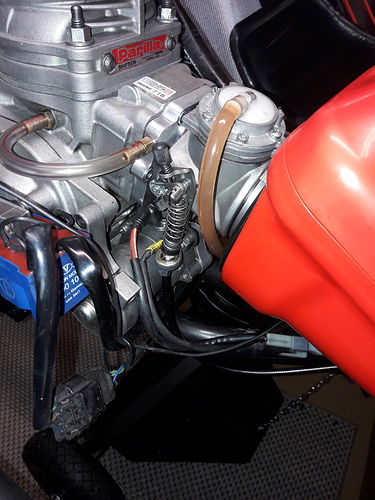 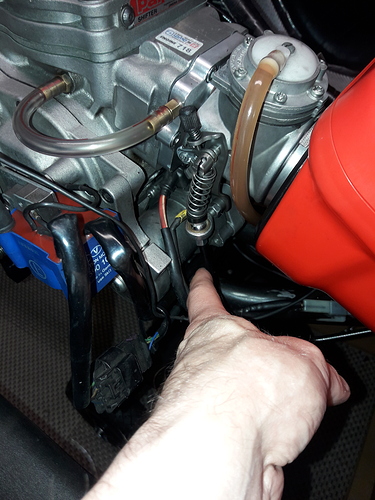 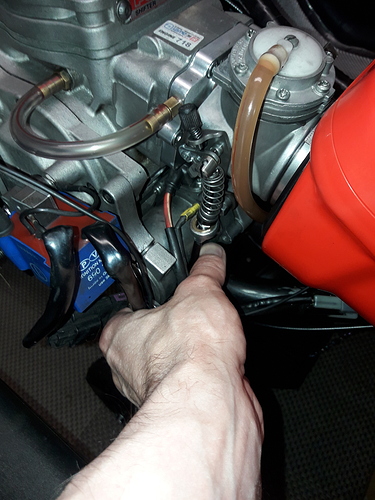 As can be seen cable has eaten a slot to cable bracket. Throttle lever has such a radius that its quite impossible to have just right position for cable bracket. This causes side pressure to throttle saft and frayed cable in the long run

So to make parts last longer I made a bracket with a bearing. Cable is free to tilt or should I say follow the lever to what ever position. No friction, wear or tear

Aim for above 60. 90 degrees is the upper limit after which you’ll seize the engine if you continue to drive - if you’re running Mychron 5 set the first alarm light at 80 and second at 90. You can limp back to the pits at 80, but if the second alarm lights up stop where you are and switch off.

Quick note related to this…

By itself, excess oil deposit is fairly normal on a two stroke when it’s outside its typical/Ideal RPM range. A leopard would usually be run around 16,000 on the high end.

Essentially at lower RPMs on a tuned pipe two stroke, an increased amount of fuel/oil exits the exhaust port. When the engine RPM range is closer to correct, pressure waves from the tuned exhaust help keep this charge (fuel containing oil) inside the cylinder.

In short, lower RPM running can lead to a bit of an oily mess, but do not confuse it with the engine running rich in terms of jetting.

If it’s gotten worse since you rebuilt the carb, then the pop off pressure isn’t correct or the needle/seat is not sealing, allowing unmetered fuel into the fuel chamber.

Now that you’ve gotten a little heat into the engine it’s time to get it on the track. Up to this point the kart has had a load similar to driving around in 4th gear in the lot.

I have 10.5 psi popping up, going down and holding 7.5 psi.
I will fit the hottest BR8EG spark plug and will fit the smallest front and largest rear sprocket. Maybe something will be better with this configuration. I’m testing it probably this weekend.

On a professional go-kart track, which I have over a hundred kilometers from home, they have a reservation list, because there is always a day on the motorcycle track - so I have to wait a few weeks for my turn. In Poland, we have a small problem with the tracks. I don’t have much anymore. Developers are building apartments nearby, people have a problem with noise, then the track is closed, another developer after a few years buys a track and builds more apartments. There was a beautiful go-kart track in my city, but the situation was the same. But thanks guys

Like you said, one option would be to adjust the gear ratio to suit the space… The downside is that it will increase the speed and therefore the danger element too. Another thing to consider is that with very big rear sprockets in the 88+ teeth range you are getting close to the ground.

Please stay safe, hope you get a slot at your track to fully open it up soon.

I would love to have more Eastern European drivers on here. It’s a part of the world that probably has a bunch of tracks I’ve never heard of. I wonder where Kubica got his start? Karts?

I know the history of Kubica very well, and I know many people from motorsport in Poland.

I’m sorry to hear that. I hope it comes back.