Looking for some help with running an Intrepid Silverstone on YDS’s. This a chassis from 05-06? I ran TAG with it on MG yellows, and now plan to run a Kohler Super Stock (14hp) sprint class at RA motorplex, Wi. We need to run the YDS tires and it’s been a long time since I’ve run anything with hard tires ( YBN back then).

My concern is the 32mm chassis and getting it to work with the tires. My idea is to start with all three torsion bars out, and switch from the hard 50mm axle to a soft 50mm. Hope to free up the chassis as much as I can. Front end to start will be 2m toe out, zero camber with no added caster. I’ll have one seat stay each side to add if needed. I think my seat is a medium stiffness tillet.

Think the chassis is going to work?
In this area the older Margay chassis have been the go to. Should I scrap the idea, sell and start with something new in a 28 - 30mm frame?
Thanks
Dedo

I’m a big proponent of running what you have at first. “Better the devil you know”. It’s probably worth getting it checked on a flat plate and scaled before the season begins. I know conventional wisdom would say 32mm frame is “stiff” but there’s so many other factors at play (Tube layout, geometry, tube wall thickness, metallurgy etc) that I’m hesitant to say that there’s no way it will work.

Tune the kart with an open mind, by that I mean make some assumptions before you hit the track, but be willing to dismiss them if they are not working.

It’s been a long time since I’ve driven YDS tires, but I can tell you that when we used to run them at Badger in Yamaha Rookie/Sportsman/Junior, the best way to get the kart to work was to make it as free as possible. The kart is not going to lift and rotate on tires that hard, especially with a stiffer 32mm chassis. So your goal will be to set it up a little slide-y.

It might be work-able, as James said, give it a shot first. I think your setup here is a good place to start.

I’m willing to give it a try, just having a negative disposition to the hard tire and chassis combo. Just don’t want to fight a chassis that won’t give me what I expect.
And yes, now would be the time to check flatness. The frame is stripped down and ready for assembly after it’s new P coat (Granny Smith Sparkle Green).
A little of my history. Started racing at the Karting Kettles in Elkhart back in the early 90’s (Briggs). Shortly after that I started my career in engineering/engine development and testing at Tecumseh. I was a proud member of our motorsports board during my 12ish years there, and raced several of our engine packages in both sprint and enduro. The last of which was F200 before switching to TAG. Stopped racing in 08 and now have an opportunity to get back involved with some old friends and have fun. But, I do want to prove I can still be competitive.
I haven’t been involved in any of the forums for a long time, and look forward to any advise that’s offered.

@Dedo With the repave the YDS is a crazy high pressure. Look for 35 min, don’t be afraid to run 40+!

My Son ran in 206 and Yamaha heavy in a handful of races on 3 different chassis. Tried removing front bars on the 2 chassis that had a front bar and it made it worse. The chassis’ that were ran wider than 52" rear track we used seat stay both sides. Our main chassis for 206 was an Ionic and has a soft axle while the others (206 MGB, KT Haase) I believe had what would be a Med.

I wouldn’t worry about the 32mm. If I was putting my Son in it, I’d show up with the front bar in, 38 PSI, get the rear around 53 if possible, send it and then pull the front bar and see what it does. Front bar in was worth a bunch for us

Maybe come spring we can be out there together and you can place chase with my Son, Randy.

I was expecting the YDS’s to be slippery, but had hoped to get some jacking and rotation. But that’s a lot to ask from that combo. Well, at least I’ll try it. I’ve got time to think of a game plan before hitting the track.

I always ran with the front and waist/middle bars in, kart went where I pointed it. WOW 35 ~ 40? I seem to recall high numbers with YBN’s, but dang!

LOL, I said the same thing when we had to go there. It’s about 10 PSI higher after the repave

So, one thing to note is that the RA surface is like absolute glass after the repave. We were running like 18 PSI on YLC’s and MG Red’s. It’s like running a rain race out there.

With that in mind, what worked for us on that track was super weird. Super soft axle, for us it was a CRG 2, and I bent two of them in a weekend just from the curbs on the track. Our front bar was the stiffest one we had, super wide on the front track, basically everything we had just to get the front end to bite and turn in.

I also had a super narrow track width in the rear, and kept the seat struts in tight to try and get some rear grip on corner exit. That’s where I would think to start with the setup for that track but I have no experience with the YDS tires or a Kohler SS.

Yeah, I totally forgot RA was repaved, so yes to what everyone else mentioned on crazy high tire pressures and “rain” setups to get the kart to turn. We did the same when we were there last year and had good success with that.

Interesting… adding to my belief that the chassis is going to be difficult to tune as is, now I need to think rain. lol

Well, at least I’ll have Blackhawk twice and Mid Ohio…never been on Mid Ohio.

I ran a Silverstone with YDS tyres oddly enough. I can’t recall exactly how the kart behaved (other than mild understeer) and set up changes, but I agree with James. Get the thing on the floor as to be honest it’s such an old chassis who knows where it’s gonna be.

Well, at least I’ll have Blackhawk twice and Mid Ohio

Yes, that’s what I was getting at. Slap on my MG’s and have fun.

Alan, what class did you run with that combination?

Just had them on for testing with a TT75.

Aside from the tires, I don’t think a 4stroke is going to work. I’d need to run outboard with a lot of engine offset. Plus, this is just a drum vs disc, my disc clutch can only run inboard.
This is using an old Tecumseh F200 block for eyeballing fit up.
I’m waiting to here back from SMC for size of the Vortex and info on it be run outboard, based on their website it can be done.
Any insite? 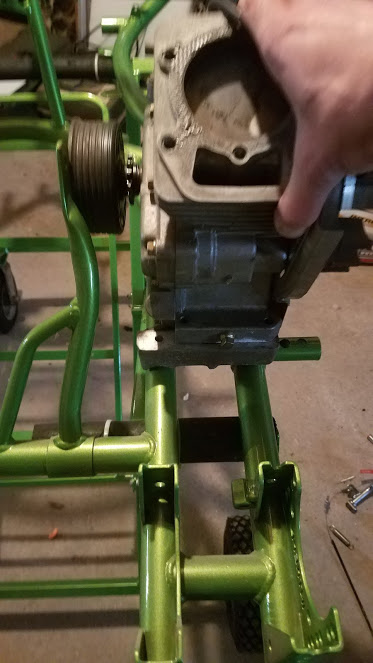 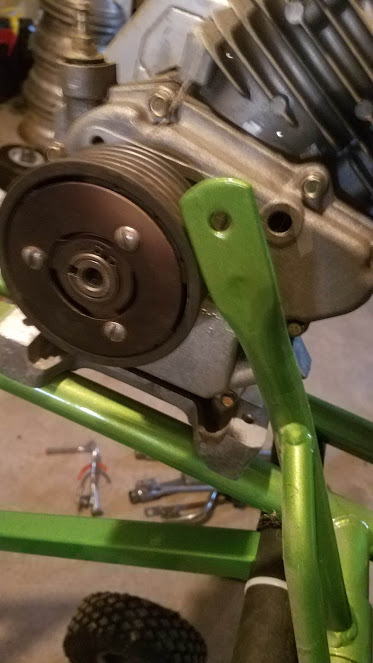 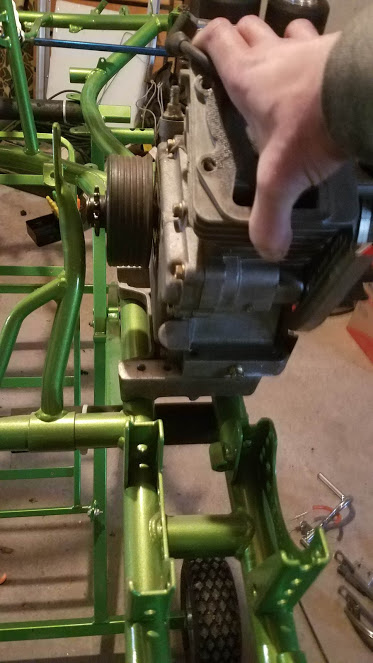 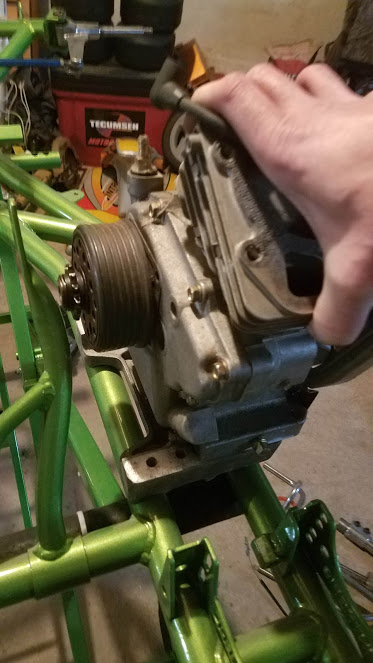 This is a pretty common issue. There’s a few solutions.

Only drum clutches are allowed under the Briggs 206 ruleset.

I made an offset plate for a PCR frame mount to do the same thing. It’s the wrong spacing for the Intrepid. The Intrepid is a flat mount, I’ll need an 8 degree for tire carb clearance. Odenthal has one that could work for offset. If that SMC can run outboard…maybe it’ll go.

I’d rather not mod the seat post, if it came to that point I’d sell and start over.
We can run a disc clutch in the Kohler class, clutch engagement is set between 4500 and 5000.

Ah good point on the Kohler. Sorry, i’m so used to seeing 206 as the four stoke on a kart.

Here’s something to consider while you’re making or buying a mount, although it’s written for the 206,it pretty much applies to all OHV four stoke engines in karting.

Briggs 206 INSTALLATION KNOWLEDGE THAT EVERY RACER NEEDS TO UNDERSTAND. From the desk of @BriggsRacing. [image] As the 206 program continues to grow so does the need to revisit past subjects from time to time as new racers enter the ranks. One fundamental: How you install your engine WILL impact performance and life. Just like a house built on only half a foundation will have issues so will a racer following suit with their engine. As I walked through the pits at a recent race one thing th…