It is possible to still become national kart champion?

Hi there! Kinda new to this forum so sorry if this is slightly offtopic or if I’m using the wrong tag. I’m currently 17 but I wonder if it still is possible to become a national champion in my country when I’m around my 20s or even 30s. I question this because I don’t have the money yet for these kinda things yet. But I feel like if I get older I might not be fit for these kinda things anymore. What do you guys think?

Well, time + resources aren’t on your side currently. The third element, talent, who knows?

I guess it’s possible but rather unlikely. Talent also requires seat time and starts are what give race experience. So, even if you have the talent of Verstappen, you’d still need years of racing to get really experienced and “good”.

But it’s sort of a moot point. Karting won’t get you anywhere, really. It’s not like there’s a ladder to f1 here in the states.

Not sure how Bas Lammers and David Sera make their living, but I am sure it’s not from race wins. I bet they are employed by a manu and do much more than just show up to races.

But, it doesn’t change a thing that there’s no where to go with this. It’s still unbelievably fun and something f you can take as serious as you want. It’s also enjoyable by many folks since it’s not too expensive, at least at club level.

But I feel like if I get older I might not be fit for these kinda things anymore. What do you guys think?

Roughly 50% of kart racers are adults. There may be a masters class I’ve seen “national” champions in their 50’s and folks still racing in their 70’s

My plan wasn’t really to go to f1 but more of the fun and competitive nature of karting like you said. But I have to agree that I need to have a lot of seat time for karting and a lot more to at least become champion. And about the talent part, I think I already have that sorted out but I’m not sure yet since they are two completely different things. I do a lot of sim racing but I wouldn’t say I’m the greatest there is. Sure I can get wins here and there but not like all the time. I’m sometimes a couple of seconds off the pace even. So yeah there is that.

I’m currently located in the Netherlands. Don’t know if that makes a difference.

What is your current age and skill level? These are the biggest factors that affect your chance at a Championship.

Given time you may improve, up on Age and you may be heavy compared to your class competitors. Its a mixed bag as far as competition levels go.

Generally I would say drivers reach their physical peak in their 20s-30s, and their mental peak as they get closer to their 40s.

I’ve seen a lot of kids go from newbie to very good in 5 years. Some rare talents even less.

You have plenty of time, assuming you have the dedication, patience, talent, and work ethic.

Alright then, that sounds reassuring to me, and thanks for the info. I will see where I will go then in the karting world and just enjoy the ride.

Given time you may improve, up on Age and you may be heavy compared to your class competitors. Its a mixed bag as far as competition levels go.

That sounds good to me. I like some good competition so no worries about that. But we will see when I get a kart.

You can do it.

I started when I was 32, it took a number of years to get OK and even longer to start winning. For the first 11 years of my racing, I raced against the best drivers I could find and afford – ICA (Suddeutschemeisterschaft) and TAG Senior (some local races and the occassional WKA race) finishing mostly in the last third of the field. When I was 43, I switched Rotax Masters and I shot to the front of the field at the FWT (a big race series in the USA in those days) and won the championship when I was 44.

Much of my success was because I joined what was arguably one of the top teams in the country at that time, First Kart, and I had a great tuner, A.J. Whisler. I was also fortunate that my job took me to a lot of race tracks and when there, I would always hop in a kart and pound out laps.

So in a nutshell –

This has to be a troll post, right? You’re 17 and wondering if, 17 years in the future, you will still be fit enough to win a karting championship?

If you’re not trolling, don’t start by buying a kart. Go to a rental kart place and start turning laps. No worries about winning championships yet. Then try an “arrive and drive” rental series like https://www.gk4kartseries.com/. You will meet a lot of adults still racing, and probably the leaders will be in the age range you’re talking about.

Given most people think karting is for kids, not an unreasonable question.

Well, it all depends on how much track time you can get and on your innate talent. You can get there in two years or never get there. In the end, we can’t really know.
But it is most definitely possible if you are the raw talent.

Iracing would be a cheap way to see if you have talent and/or desire. You’ll get a much better sense of ability distribution levels if you dive in there. Huge population compared to karting.

Anyways, you will see what talent looks like at the highest levels in iracing.

Also, why does Karting’s future with you hinge on being national champion? Would it only be worth doing if you could do it that well?

Or is it more of a “I think I have the talent but I want to verify that spending all this money on karting makes sense because I’ve heard that if you don’t start at 3 you are screwed?”

If the latter, dont worry about it. Yes you would be screwed for f1, it’s too late, unless you are truly (team buying) rich. But, karting is full of older racers. Some are new to racing some are old salts coming back from their younger days and some are just folks that never left racing.

If your ability ultimately exceeds your local field, go regional. If that’s not tough enough, sign up for the National races like Supernats.

There is always someone faster out there to race against. 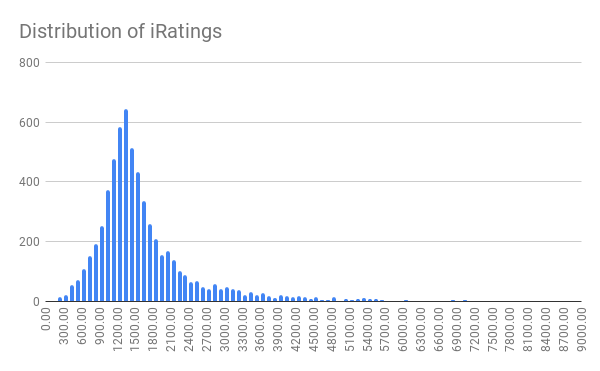 What’s interesting is that iracing seems a bit like golf. The difference between a scratch golfer and a PGA touring pro is subtle but massive. Same here. In my case I am top 1% in my series. But in reality, I am just a slightly above average n00b as defined by Irating. So, even a non-National champion can have a ball and be competitive.

Mmm, you are now asking the questions! I feel like national champion is the higgest I could reach given time and money. Although most guys would say aim higher I feel like that is the most highest I can reach. And I guess it looks good when I want to do more racing with racecars with a team but I’m just guessing here. But your plan of going local then regional and if that still isn’t enough then national doesn’t sound wrong. I like your idea about that! And I have to agree iracing might be a good way to show me where I’m at in terms of skill. I did play it for a while but it is been too long that I don’t remember what my irating was again. Maybe I should give it a go again?

Not a troll sadly enough. Yeah, you could be right since I don’t have that much seat time yet. So I should be aiming smaller I guess. I heard of that series before. Looks interesting for sure and might be lots of fun too.

Thanks for your incredible story and motivation. Looks likes it never is too late to be a champion. Hope you get your pace back soon enough!

Maybe I should give it a go again?

Perhaps. I find it to be really useful from a learning and seat time perspective. Realistically, at best, I could kart once a week. That would require a pretty good budget, though.

Most series are sort of once or twice a month, which just isn’t enough seat time. Sim fills the gap for me and keeps me moving. It’s also really great in that you can learn the intricacies of playing in traffic without real consequences. Thus, you can push yourself.

It’s not 1 to 1 sim to IRL, but it’s close enough to be very useful. If you don’t have the budget to pursue unlimited karting, consider iracing.