Decided to split this into its own build thread, as I’m going to be updating a lot and don’t want to spam up the transport topic.

Spending more time with my Hamster Van (wife said it looks like a hamster on wheels). I’m so excited about this thing. I’ve been driving for a couple days now and it’s a blast. It’s basically in mint condition. No rust, fires right up, shifts great, brakes are good, no weird noises or vibrations. It eats a little oil, but its a 25 year old work van… It’s weakness is power at this point, with a pretty agricultural-feeling 1.8 liter 4 cylinder NA engine making just under 80 hp. But still, I got it up to 70 mph pretty reasonably today with no issue, and that was one of my biggest worries. She will definitely go north of 80. Lack of cruise control will be a little annoying, but not a dealbreaker.

So the rear opening is 53" at the widest part, which means it won’t swallow a kart fully setup in race-mode. But if I narrow the rear up or just remove the rear wheels to get it through the door, the inside is plenty big for a kart and lots of goodies. It’s about 58" wide through the whole of the cargo area, and about 90" from that metal crossbar to the rear door, which means the kart will sit in there no problem without removal of bodywork. The best part is the slightly higher roof, which means I can stack stuff around in here or throw a cargo net in the ceiling for more storage. Also nice that the cargo area is flat bottom, so no wheel wells to interfere.

The rear bench seats fold down and then fold forward for extra space too, and then I plan on hanging a monitor on that cross bar so when we are at the track we can sit in there and do data right in the van on the seats. That platform under the crossbar could be a nice storage opportunity or spot for some table tops too.

The double sliding doors are nice, but the roller bearing is broken on the driver side mount, so it doesn’t currently slide very nicely. And since the double sliding door was a rare option, there are no more of those brackets left in the known universe. But I have sourced the bearing and will be fixing that when it arrives. I also ordered some OEM center lap belts because the rear seat doesn’t have seat belts… I at least want a lap belt to mount a car seat in there so this thing has some family practicality too. We were going to fill the van with junk and make a Goodwill run this weekend but then realized the bebe couldn’t ride along. If I can make this a bit more family friendly I think the wife will warm up to it!

Also need to lower it obviously. It looks pretty ridiculous the way it sits now compared to American cars. Definitely sticks out like a sore thumb. Plus it’ll make loading easier if it’s lower. 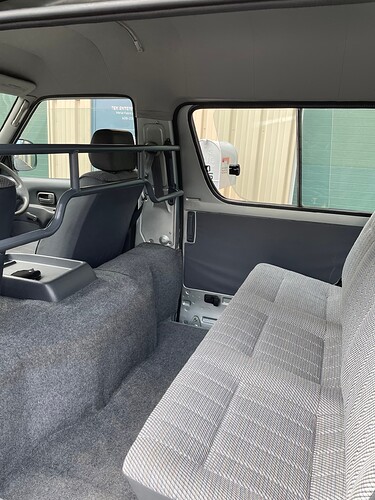 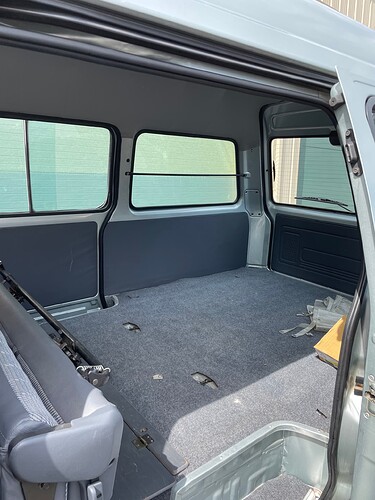 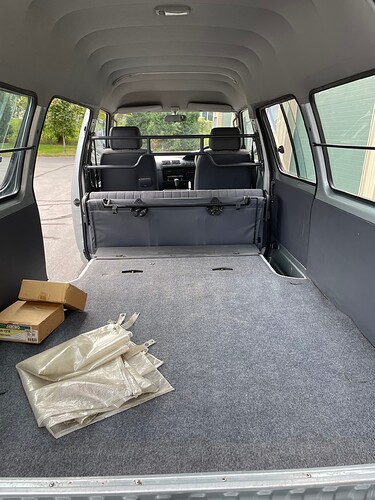 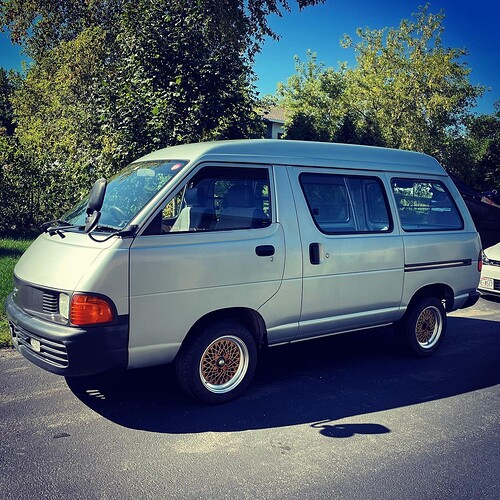 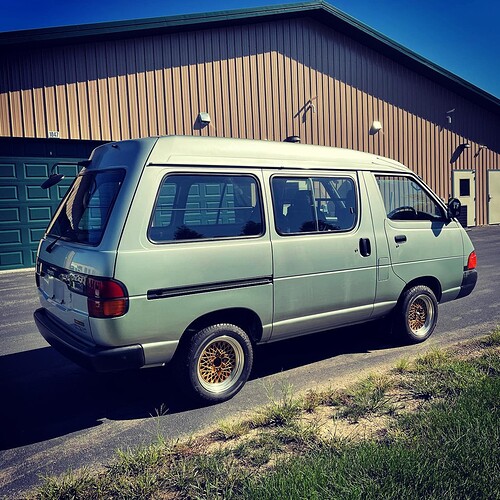 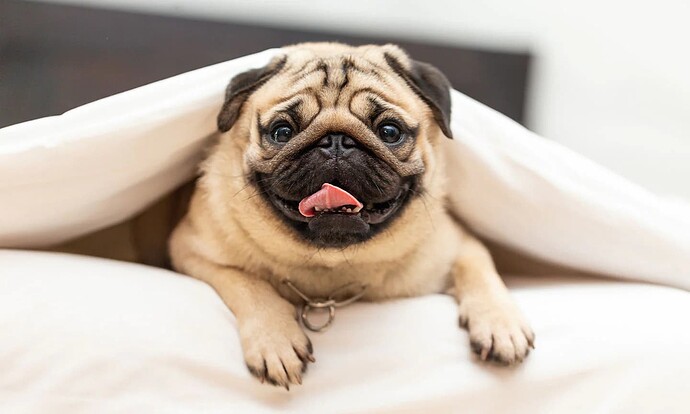 Just throwing some ideas out there. Are the side door any larger? Would a Kart fit in that way? If you use the back maybe a roll-out deck may make load/unloading easier. There is a company called Decked that makes units for truck beds, maybe could copy something like that for your application.

Thinking this out further, if you had a plateform on an angle you might be able to fit without removing tires.

Side doors are significantly smaller. Kart definitely won’t fit in there.

I plan on building a platform for the kart to sit on and then it should be easy to slide it in, like we’ve done on past small enclosed trailers.

If a kart can fit through the side door, than you could make a little kart holder that slides out the door, that way loading is easy. It could have fold out legs to keep it stable when it’s out, maybe it could even double as a work bench.
Edit: I see no reason why this wouldn’t work for the back door as well

Fits into those its so ugly its kinda neat category, lol.

TV is a little overkill, but it was a spare we had in the guest bedroom so the price was right. This is the data center quadrant of the van, so between sessions we can hook the laptop into the TV and watch video and do data on a nice big screen sitting in relative comfort. 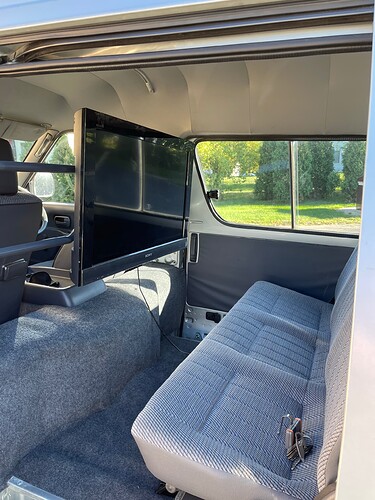 I did a lot of measuring and researching today to find the optimal size for ramps/platforms for the kart to sit on, and figured out the optimal way for things to kind of sit during transport. If I go with 8-10” wide platforms on either side of the van for the kart wheels to go on, it should slide perfectly in and rest somewhat on the folded down seats. That gives me room to also slide a scissor stand flat between the platforms and should still provide space for storage crates under either ramp.

I saved a bunch of room by switching from a scissor stand to one like this Italkart stand. In my 5ftx4ft Tacoma bed I can fit a fuel can, two sets of tires in bags, small air compressor, kart stand, tool box, and have room in the back for two large totes of parts/tools/cleaning/etc. Then have a small 2ftx4ft folding table, 10x10, front bumper, gearbag in the back seat. With my old stand I struggled to fit half as much stuff under the kart in the bed.

Good note. My dad used to make stands like that one, I’ll see if he has one laying around too.

My paint shop is essentially a closet so I’ve become a master of trying to optimize small spaces.

I love it. You could also sell tickets for the seats to watch f1 on a real TV during the kart race

Having the ability to watch F1 was also a consideration for sure. Or play Xbox.

Kartkraft at the track if you can fit a small form factor PC in there.

neat project turning an import into a racing day van.

Drove the van to Dousman today for the last day of the Route 66 event as a test run on the interstate to see how it performed at high-speed over a longer period of time. This was a legitimate concern for me because it only has about 75-80hp so it’s not exactly built for big American highways and long cross-state journeys.

Cruised just fine at 70-ish the entire hour there and back. Windows down, wind in my mustache, beautiful drive. 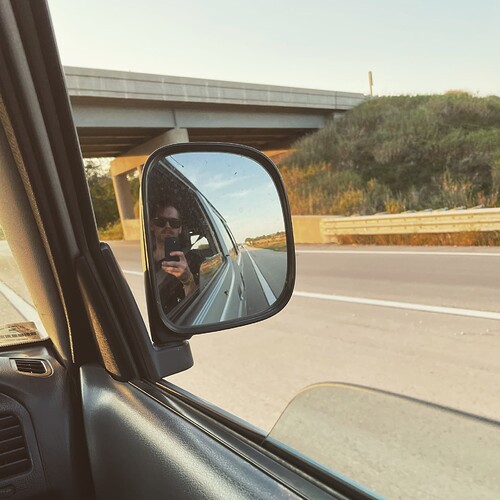 I’ve got some cool little parts for it to spruce it up, and hopefully this week I can get the platform for the rear fabbed up to start organizing the back half.

wind in my mustache, beautiful drive.

Glad to hear it. Mustaches on team bosses is a good idea.

How’s the cabin noise? I find that doing longer trips in my less well noise-insulated vehicle is pretty tiring.

you have to let the mustache obsession go dom!

He brought it up, even referenced the wind.

the wind was a nice touch to be fair

The noise actually isn’t bad. It’s a bit tin-can in there but honestly better than I had thought it would be. I’m sure once I load it up with gear, it’ll rattle and stuff a lot more.

Wait a second… Is this a right hand drive or is someone else driving?